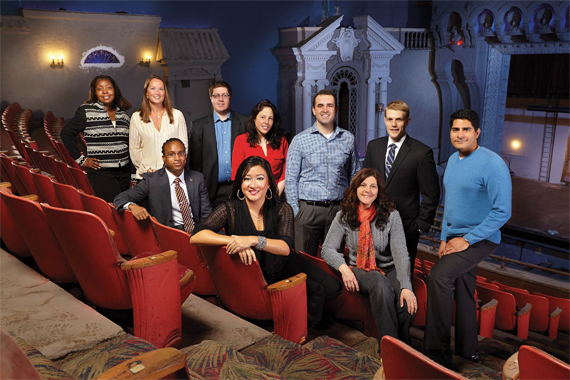 A few years ago, while in conversation with a friend, I asked why it is that our culture interprets the idea of philanthropy only as giving money. I thought that since the word philanthropy is Greek for “a love for humanity,” any act of kindness should count as philanthropy. My argument was based on disillusionment with the idea that plenty of benevolent people would never be considered philanthropists simply because they could not give large sums of money to a cause; I’ve since realized that it was not really the cultural definition of philanthropy that had left me disillusioned. In essence, my heart was just crying out for the opportunity to be able to give money in abundance as others could.

Fast forward three years and the talk of the town in the world of young adults has become the Gen Forward Network, previously known as Give Forward, of the Community Foundation of Greater Flint. Here’s the lowdown: CFGF knew that there were a lot of 20- and 30- and 40-somethings who wanted to make an impact financially but could not because they lacked the resources. Although this age group in Flint is a talented lot, we cannot claim the creators of Facebook or Twitter among our residents, which means that instead of having millions of dollars to give, we have thousands of dollars in student loan debt and entry-level jobs. CFGF saw the desire within this group to donate, so they devised a way for young people to make a larger impact collectively than they could individually.

Gen Forward gives young adults 20-49 years old the chance to purchase voting power (but not like Washington lobbyists). For $200, an individual buys one vote for how the pot will be distributed. Their votes can go toward any one of a list of proposed projects to be finalized this fall. At present, there are 50 members of Gen Forward, and the idea is to turn a $200 donation from one into a large grant from many, which will be given to the project that receives the most votes.

Enter the 19- and 50-year-old complaint: “Why can’t we be a part?” Well, let’s face it, those outside of this age range either have too little purchasing power because they are too young, or they have a lot of purchasing power from years of work. To those of you in the latter lot, do not be dismayed: those outside of the prescribed age range who would still like to give can of course do so, although they are not eligible to cast a vote.

Gen Forward has been underway since early 2013, and at present their endowment rests at just over $80,000. Thus, the time to vote on a project and write the collective grant is fast approaching. At the last meeting, the group discussed four areas where they would like to see the money go to make the greatest impact: crime and public safety, education, employment, and the city’s new master plan. The final meeting to determine whether or not the monies will be divided amongst several projects or remain consolidated was scheduled for early October. Although October 1 also served as a preliminary cutoff date for entry into the grant for this year, the organization will allow additional participants and votes up until the point of drafting the grant.

Naturally, the Gen Forward concept is two-fold: emboldening young philanthropists to give, even if their resources are limited, and assisting the young entrepreneurs who receive these donations. If you are a young adult who would like to be part of this movement, but even $200 is a stretch, know that you are permitted to give in $50 quarterly installments. Gen Forward is on schedule to administer the grant by January 1, so now’s the time to jump on board! Visit Gen Forward Network online for details.