The summer of 2012 found Geena Gall basking in the euphoria of being an Olympian.

The Grand Blanc native fulfilled a dream she had harbored since grade school by placing second in the 800-meter run at the Olympic Trials, charging from sixth place with just over 200 meters remaining.

Less than two months later, Gall was soaking up the Olympic Games experience in London, and the thrill of donning Team USA colors to march in the Opening Ceremony and compete against some of the world’s best. Battling a nagging calf injury, she advanced through the first round to the semifinals and was greeted with a hero’s welcome upon returning to Grand Blanc, which included a Geena Gall Day. 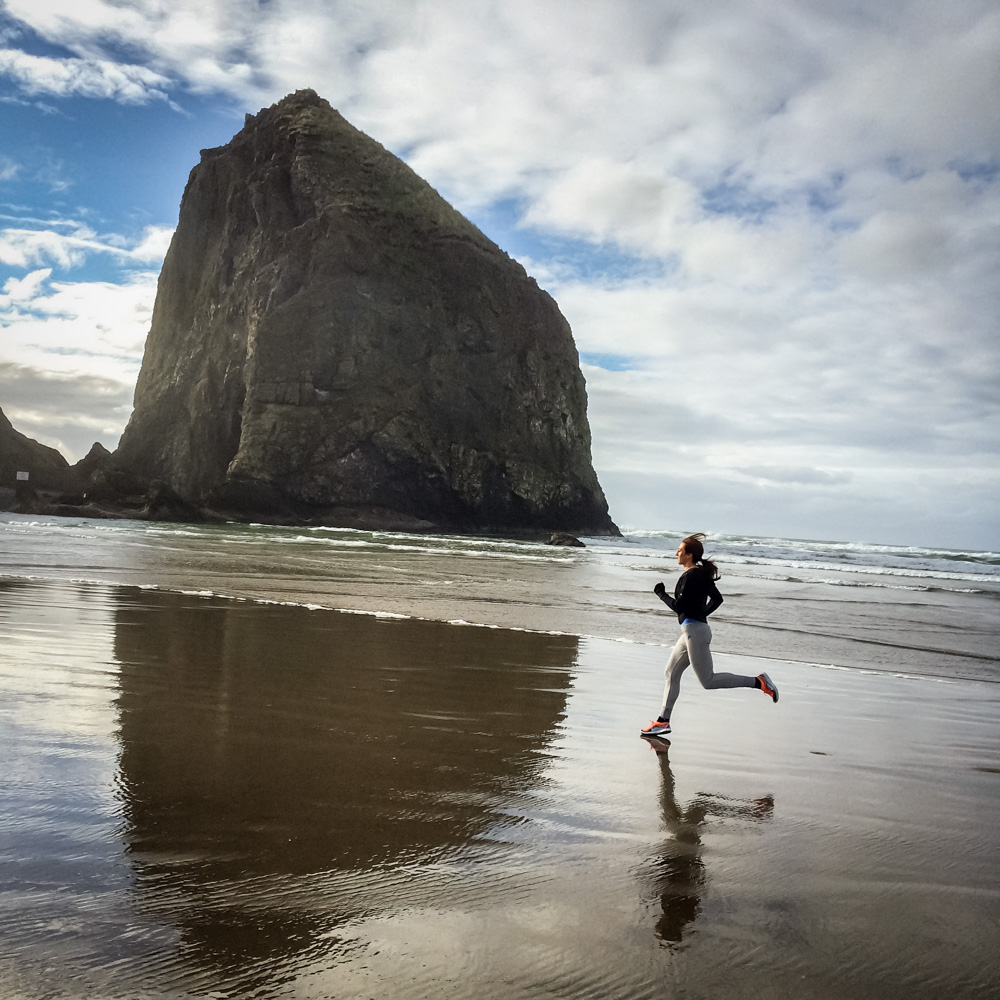 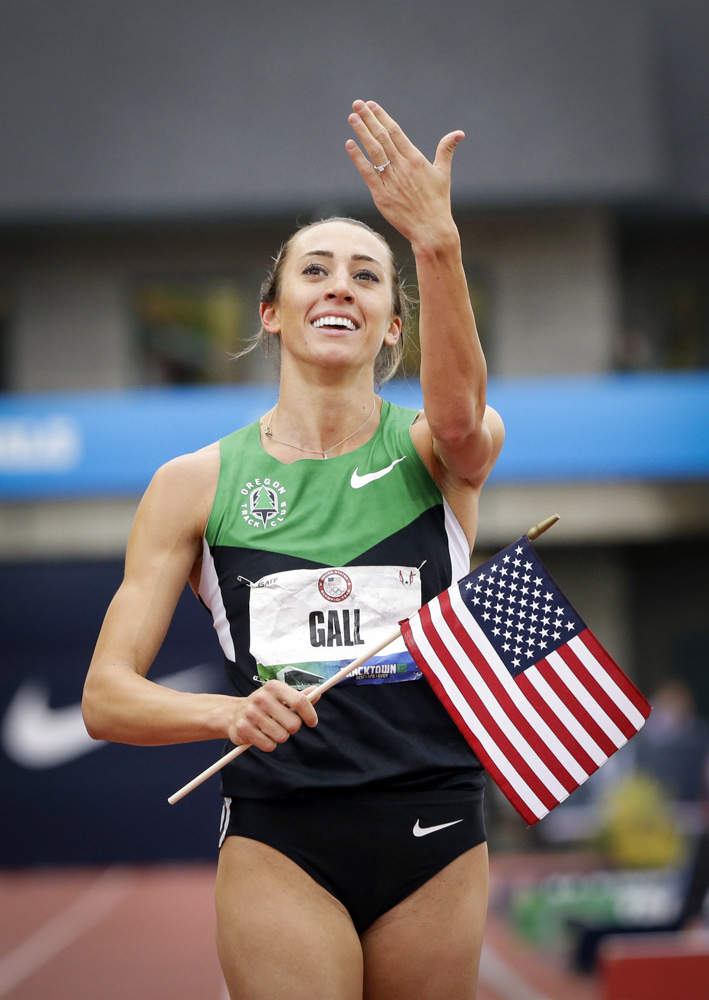 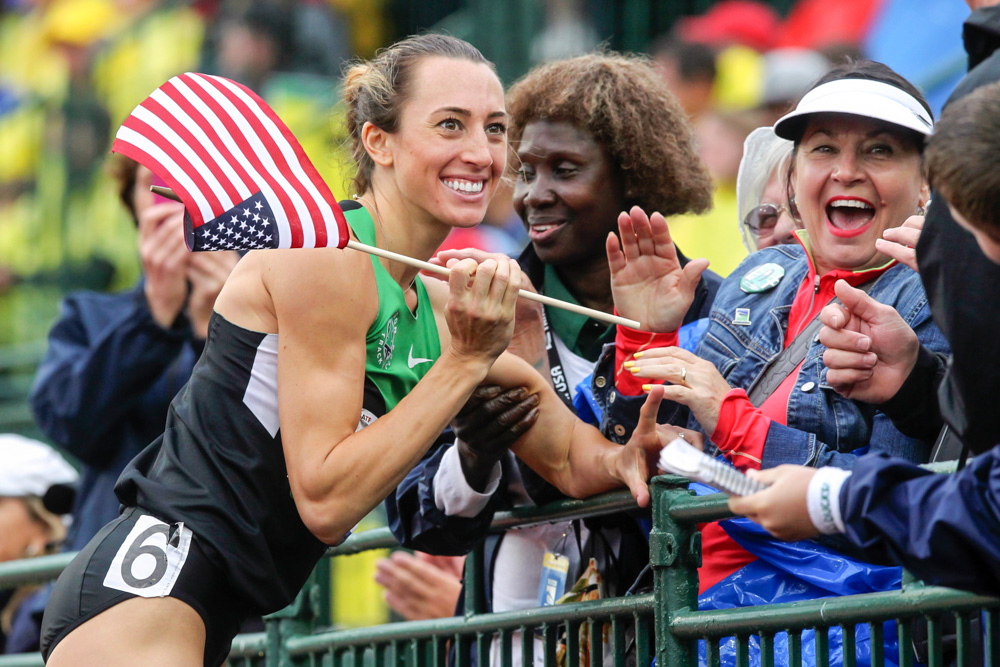 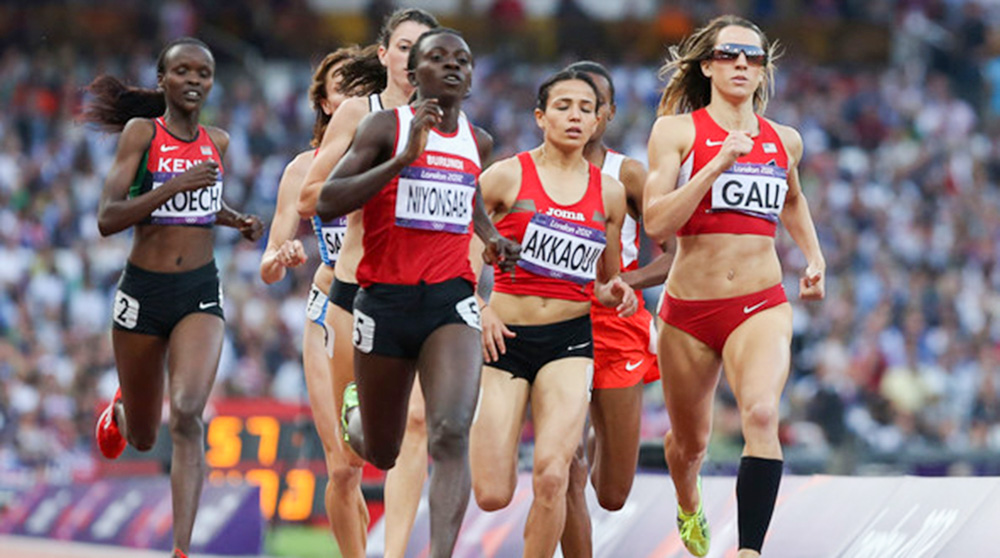 She also visited the state capitol as a guest of state senator Dave Robertson and even met President Barack Obama and the Vice President at the White House.

“Becoming an Olympian was a dream come true for me, and it had been a goal since I was nine years old,” says Gall, also a two-time state champion at Grand Blanc and ten-time All-American at the University of Michigan who now resides in Corvallis, OR. “I did what a lot of Olympians do and got the ‘Olympic Rings’ tattoo,” she smiles. “I think the most important thing about becoming an Olympian is being able to reach out and inspire, motivate and empower the next generation of Olympians.”

As she returns to the Olympic Trials this month hoping for a repeat performance, what Gall has overcome, fought through and accomplished in the four years since, is also inspiring, motivational and empowering. She has endured the loss of a Nike sponsorship deal, switching teams, starting new jobs, moving, changing coaches and a painful fall one winter that set back her training.

Always a fierce competitor and adept at overcoming difficult circumstances on the track and in life, Gall, now 29, has persevered and is loving life, eager for what the future might hold.

“I’ve been living in Oregon since 2009 and love it here because it’s such a beautiful state, a great place to train and such a running mecca,” she says. “I’ve met some great people and made some good connections. I have a job at the Oregon State that I really enjoy and another part-time job [Trader Joe’s] and I’m really pleased with how my training for the Olympic Trials has gone.”

Now sponsored by Brooks and a member of the elite Team Run Eugene, Gall was named Oregon State’s Director of Cross Country and Track and Field Operations in 2015 after serving for a year as a volunteer assistant track and cross country coach at the school. She is responsible for ensuring that the program runs smoothly – from travel arrangements to keeping track of equipment to managing home meets and plenty more T-crossing and I-dotting.

“I have always wanted a full-time job in track and field, so this has been nice for me to have such a role in a college program because I loved my time at Michigan,” she says. “There are about 45 athletes to manage and it’s non-stop with cross country in the fall, indoor in the winter and outdoor track in the spring, but that’s what I like and it’s great to work at the same place where I also do a lot of my training. It’s a non-coaching position, but I can still give the athletes informal tips.”

Beavers’ coach Kelly Sullivan is thankful Gall was named to the position.

“Geena brings so much to our program overall, and when the position of operations director was created I was very happy to hear she was interested because it’s the kind of role that suits her well,” Sullivan says. “She handles all the responsibilities well and is a good example for our athletes as far as finding balance in their running careers, professional careers and personal lives.”

Gall moved to Corvallis from Eugene after the 2012 season in which she was third in Track and Field News’ year-end U.S. 800 rankings, her fifth straight year in the top nine. Of the 116 women who have appeared in the Top 10 since the rankings began in 1976, she is one of only 29 who have been ranked at least five times.

“Becoming an Olympian was a dream come true for me,
and it had been a goal since I was nine years old.”

In 2013, she made the finals at the National Championships before experiencing some upheaval in early 2014 when Nike dropped its sponsorship of Gall, which had allowed her to train full-time without working. On top of that, she made a difficult decision to leave Oregon Track Club Elite and slipped on a patch of black ice, injuring her back and missing a month of training. In the meantime, she had resumed training under Michigan coach, Mike McGuire, with the help of the Oregon State staff.

Just when Gall’s life seemed to have a taken a turn for the worst, it almost immediately began to improve. She used a grant from USA Track and Field and began working at Trader Joe’s to make ends meet and started coaching at Oregon State, which allowed her access to its training facilities.

Less than two months later, Gall was part of Team USA’s winning 3200 relay squad at the World Relays Championships in a then-American record of 8:01.48.

“Working at Trader Joe’s was actually the best decision of my life as a far as a really cool company to work for and joining the Oregon State staff around the same time worked out very well,” says Gall, who was selected to ride on Trader Joe’s Float in the 2015 Tournament of Roses Parade.

Gall also joined Team Run Eugene in 2014 and began training under its coach – 2008 Olympian, Ian Dobson. “I wanted the stability of a team and I knew Ian from when we were both part of Oregon Track Club Elite, so it’s been a really good fit,” she says, making the 90-minute roundtrip drive to Eugene about twice a week to train with the team.

Gall did not have to travel far to join her first training partners – her siblings, including All-State football player Reggie Benton who later signed with Purdue, and father Jerry, a track letter-winner at Kearsley High School and junior college decathlete.

“My older siblings kind of pushed me into it and I was only about six or seven when I started in organized track events,” Gall recalls. Still, she did not attempt what would become her signature event until her sophomore year of high school.

“I was a sprinter growing up and not sure about running that far, but the coaches convinced me I would be suited for the 800 and I was pretty surprised with the result the first time,” she says. So were plenty of others, because Gall clocked 2:21, just two seconds off Grand Blanc’s school record which she soon shattered. A little more than a year later, she won the first of two state championships in that event. In her final high school race, she set a state record of 2:05.05, which still stands 11 years later.

Gall’s success continued at U of M, where she became of one five women to win two NCAA 800 titles after placing fourth and fifth in the event as a freshman and sophomore at the NCAA Championships, making a her a rare, four-time All-American in the event.

She also placed seventh at the 2008 Olympic Trials after her junior year and was second at the USA Outdoor National Championships in 2009, making the World Championships of Track Field where she reached the semifinals. Gall clocked her personal-best time of 1:59.24 at the 2012 Olympic Trials, pumping her fist in the air as she crossed the line. Among Michigan High School graduates, only Detroit MacKenzie’s Delisa Walton boasts a faster time (1:57.80).

Gall has not run under two minutes since, and it will likely require a similar time to make the Olympic team again.

“I think my training has gone extremely well, and I’m peaking for the Trials,” she says. “My speed and endurance workouts have me ready and you certainly need both in the 800 – sprinter speed and strength.”

While returning to the Olympics is her goal, just placing in the top seven for the third time will put Gall in rare company. Only six other women have made the top seven three times or more at the Trials in the 800.

“Geena’s training has gone well and she’s gaining momentum every day,” Dobson says. “Geena is very disciplined. She’s healthy, fit and excited to race. She’s an athlete who rises to the big occasions. She’ll run better when there’s a lot on the line, and that’s why she’s an NCAA champion and Olympian. I don’t know how the Trials are going to end up, but I know for certain that Geena will get every ounce out of herself.”

No matter the outcome, the Trials represent only a small chapter of Gall’s accomplished life. More exciting chapters are sure to be written. In fact, she plans to retire from competitive track running after this season, run some road races and perhaps run triathlons while focusing on career growth.

“I want to stay in the sport and love what I’m doing now, but the future is up in the air,” she says. “I would love to work in marketing or communications for an athletic shoe or sporting goods company and return to coaching one day. I feel like the sky’s the limit for me.”
Gall is indeed one person who is seemingly without limits.