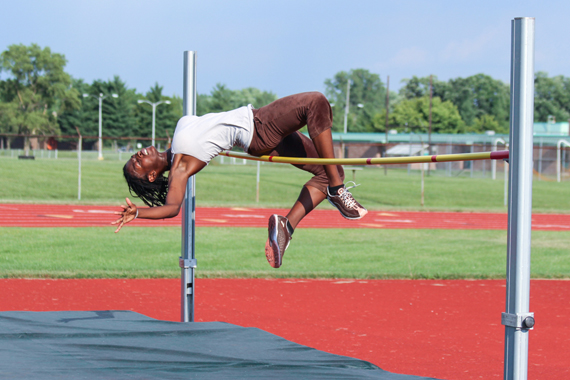 The 57th Flint Olympian Games were held on July 9 at the Guy V. Houston Stadium at Flint Northwestern High School, featuring youth ranging from four to 21 years old. Participants who performed well will be given the chance to compete at CANUSA, to be held August 9-11 in Hamilton, Ontario, Canada. CANUSA is recognized as North America’s largest and longest running games. For 55 years, amateur athletes from Flint, Michigan and Hamilton, Ontario, have competed against one another in 15 different sports with honorable sportsmanship and pride.

This year’s Flint Olympian Opening Ceremony was dedicated to the memory of longtime Flint Public Schools educator and CANUSA supporter, James H. Bracy, who passed away at the beginning of this year. Bracy’s family lit the torch to signify the beginning of the games, and three doves, representing the Holy Trinity, were released in his honor to recognize Bracy’s Christian faith.

Clif Turner, who also worked in the Flint Public Schools, was excited to take part in yet another prelude to CANUSA. He appreciates what the Flint Olympian offers local youth. “Look at the young people. It’s an activity for them in the summer that helps them develop skills and become better athletes.” Speakers for the opening ceremony included Flint City Mayor Dayne Walling and Olympic Gold Medalist, Claressa Shields. Shields shared with My City Magazine that she was impressed by the community-wide support and participation in the games. “I really like that all the kids are here from different schools and different programs just from around Flint,” she said.

Sean Croudy has been on the planning committee of the Flint Olympian and CANUSA games since 2006, and he competed in the games as a child. He beamed with delight as he explained how much he appreciates the games. “I love to see the smiles on kid’s faces; it’s all about the young people in Flint and Genesee County. It gives me great pleasure to bring joy to them through what we do as volunteers and organizers of these games.”

Are you interested in purchasing photos from this story? Go HERE and select the “Flint Olympian” category.