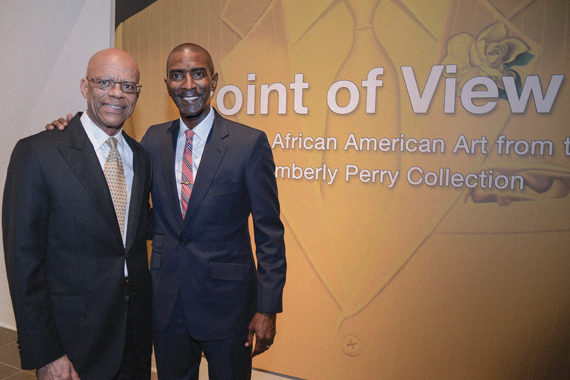 The FIA’s 7th Annual Community Gala, which featured the evocative works of contemporary African American artists from the Elliott and Kimberly Perry collection, was held January 25. While the collection has an impressive story behind it (see previous page) the tale of the Gala is also noteworthy. Louis Hawkins, currently the Second-Vice President of the FIA Board of Trustees, says that the project was conceived and initiated by Director John Henry, Lynne Hurand and himself, with the intention of attracting demographics that were historically missing from the FIA’s register of supporters and visitors. “There was a disproportionate under-usage of the FIA by local African Americans,” said Hawkins, “and I noticed it as a Board member. In fact, when I joined the Board, there was only one other African American on it.” Louis spoke with John and Lynne, and they came up with a plan to bring a new crowd into the FIA: an event featuring art that appealed to the community’s diverse members. “The first year was such a big success that we said, ‘We have to do this again!’” Louis recalled.

Kathryn Sharbaugh, Assistant Director of Development, can remember a time when there was very little variety at the FIA. “Louis is largely responsible for demanding the changes that have resulted in the diverse FIA we know today,” she said; Louis, however, gives credit to John Henry, who is responsible for procuring exhibitions and who gives consideration to art that encourages a diverse audience when he makes plans for the FIA.

While the Gala is certainly popular with Flint’s minority communities, FIA wants to extend the positive effect of the Gala on its membership beyond this event. Therefore, Gala-goers receive a six-month membership to the FIA with the purchase of their ticket, which provides them a discount to any of the myriad events held at FIA. Louis says that this membership gives those who might otherwise not feel comfortable the opportunity to get involved and experience everything FIA has to offer.

See more photos HERE, or purchase photos from this story by going HERE and selecting the “Community Gala” category.