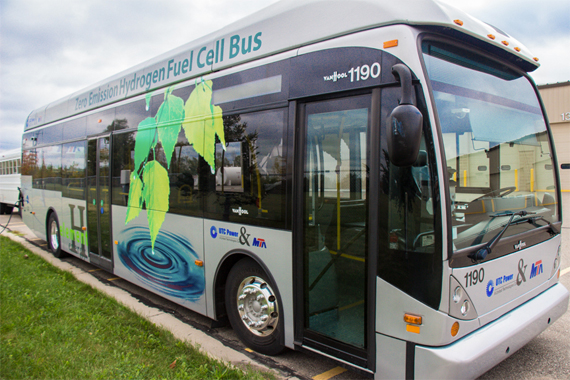 Like the veins in our bodies that deliver life-giving nourishment, a strong public transportation system is vital to the success of any large city, and Flint and her surrounding communities have one of the strongest systems in the nation! The Flint Mass Transportation Authority (MTA) was the recent recipient of four awards, all of which recognize this transit system as one of the top public transportation fleets in the country. Under the direction of General Manager/CEO Edgar Benning, the MTA is a well-oiled machine, ensuring that its vehicles run as efficiently as possible to keep the city moving toward growth and sustainability.

Each of the awards is a testament to the fact that the Flint MTA is a sustainable “green” business, having a positive impact on the environment at a low operating cost. The Green Fleet award was given at the BusCon Expo in Chicago in September, honoring Flint MTA for their commitment to improving the environment and health of their communities by adopting the nation’s leading clean alternative fuel, propane automobile gasoline. Other awards included a first place Marketing Award presented at the American Public Transit Association annual meeting, as well as a Michigan’s Best and Brightest Sustainable Companies Award, while Benning received the Sustainable
All Star Award for his commitment to the organization’s transition to sustainable fuels. “We are very excited about the awards!” exclaimed Benning, “and we’re working hard to sustain services and meet the needs of our community today and into the future.”

Established in 1972, the Flint MTA is Genesee County’s authorized operator of public transportation, employing 470 people. The MTA’s 270 vehicles provide one of Michigan’s strongest regional commuter services, utilizing over-the-road, coach-style buses and vans. There are 14 standard, fixed routes within the city of Flint and the suburbs, as well as 64 peak hour/rush hour service vehicles. The buses also provide transportation for commuters living in Genesee County requiring service into Oakland, Livingston, Saginaw, Lapeer and Washtenaw Counties. Benning says the MTA carries 3,000 people a day to jobs outside Genesee County. “We’re out on the streets picking people up at 4:30 am!” he exclaimed. The MTA also operates Your Ride, a van service for special needs customers and the general public throughout Genesee County. In 2012, 6.2 million riders used services offered by MTA, and every day, more than 20,000 passengers pass through the Downtown MTA terminal.

The MTA’s statistics belie the hard work and tough decisions that Benning has had to make during his tenure as CEO. Sustaining services has not been an easy task, with the decline of residents in the immediate area and the sour economy, which has resulted in substantial losses in the local funding base. Add to this a greater need for public transportation Due to the aging population (by the year 2040, 25 percent of Flint residents will be over the age of 65) and today’s young millennials, who are opting to forgo the purchase of a vehicle and ride the bus instead.

One of the biggest challenges, according to Benning, is to keep in operation one of the oldest fleets in the country. Some of the most ancient vans are over 31 years old and have logged over 700,000 miles, with average mileage hovering around 450,000. “Fortunately, we have a great crew that keeps our vehicles running,” Benning reports. The MTA utilizes bus refurbishment as a means to lengthen their lifespan beyond the national standard of 12 years, allowing the wheels on the buses to go round and round for so many miles. This year, Flint MTA was able to purchase 92 new vehicles with Federal and State grant assistance. In addition, the MTA has grant funds available to replace up to 170 old vehicles with new. Until then, the MTA replaced frame parts and re-welded the sides of the buses to keep them on the road.

There are many reasons why the Flint MTA has been so successful. In a time when millage funding is lower than ever and the need for public transportation in our community continues to grow, innovations in efficiency are keeping the motors humming at the MTA. “We are able to provide a high level of service, the highest of any transportation authority in the state, and at the same time, we maintain the lowest cost per passenger,” Benning reports. Along with bus refurbishment, alternative fuels have helped to keep costs low and service exceptional.

As their budget shrank and the price of gasoline increased, the MTA recognized the need for alternative fuel. At their new fuel facility in Grand Blanc Township, they now generate three alternative fuels: hydrogen, compressed natural gas and propane. “We have the largest fleet of propane busses in the country,” Benning boasted. Producing their own fuel will allow the MTA to stabilize future operating costs because they won’t be dependent on gasoline. “Now, with alternative fuels, we’re better able to control our costs,” says Benning, noting an annual cost avoidance that will exceed over $1 million and up to $2 million when the entire fleet is converted to these alternative fuels.

Along with the opening of their alternative fuel facility last year, one of only two in the country with the ability to produce multiple alternative fuels at one site, the MTA unveiled its new hydrogen fuel cell bus. The Flint MTA is the first transit system in the Midwest with a hydrogen fuel cell vehicle. The fuel cell bus is hybrid-electric, zero emission, and powered by a 120 kW UTC Power PureMotion fuel cell system. The MTA is currently in the process of purchasing a second hydrogen fuel vehicle to add to its fleet. “As an organization, we are constantly taking every effort to become more effective and more efficient. The use of new technology will help us to meet our future goals and provide the necessary services for our community,” Benning says.

Benning says the MTA has a tremendous team of people in place who work very hard to keep costs low and services high. He is very proud of accomplishments of the Flint MTA and of the high level of service they deliver. Born and raised in Flint, Benning has been with the MTA for nearly 34 years and says he has received a number of offers to work at other transit systems throughout the country, but he chose to stay here, in his hometown. “I love seeing how we help people and how the service we provide has such a positive impact on the lives of so many,” says Benning. “I am so thankful for what we have here and our great team at the MTA. It’s really a great place to work.”

Resourcefulness and efficiency have turned adversity into opportunity for the MTA, and the future looks bright for them, and for Flint.

Are you interested in purchasing photos from this story? Go HERE and select the “MTA” category.