When Rivethead: Tales from the Assembly Line was first published in 1991, it emerged fully saturated and seething with Ben Hamper’s Flint; four generations of local shoprats, underground music, poetry, and one man’s story pulled from the anonymity of shop life. Rivethead began as a column called “Revenge of the Riveter” in Michael Moore’s underground publication, The Flint Voice. 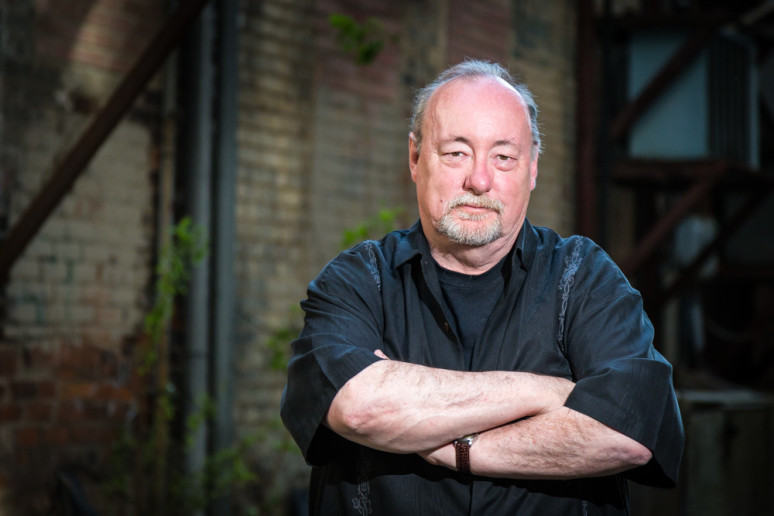 Hamper calls himself “a lifer, I was born to do this” – meant to spend his days in the shop like his great grandfather, both grandfathers, grandmother, several uncles, brothers and sister in law, who he says still work for GM. But, Hamper never made it to the 30-year mark. Instead, the writing and music that were his mission and method of escape in the face of the monotony of riveting and ticking clocks, has remained. Hamper is currently a radio disk jockey at WNMC 90.7 FM out of Traverse City, going on 11 years. He has two shows: “Soul Possession” on Friday nights and “Head for the Hills” on Sundays, which are two of the station’s more popular shows, especially with online listeners.

For Hamper, “music has been a constant” and a part of his writing from the beginning. The first piece he published in The Flint Voice was an album review, his first cover piece in 1981 was titled, “Rock is Dead (They Say)” which railed on overplayed music, and set the bar for radio as a place to show “the magic of the music, unrestrained and boundless, springing from his radio.”

Hamper’s fixation with records began very young, “I was transfixed by the idea that they could play over and over, and not have to wait another hour on the radio. That fixation only heightened when he entered the shop, “it was something I used as an escape.” Hamper says the predominant music of the factory was “Classic Rock and Heavy Metal, and I was always battling that and trying to expand their horizons.” He saw the tired, overplayed music, as a metaphor for the monotonous work of sons blindly trudging worn-down paths. “Our fathers did this boring, ridiculously monotonous drudge labor, why not spice it up?” His gauge for music and writing is authenticity; searching for “unbridled honesty and pure passion.”

With that in mind, Hamper and his friends set out to make their own playlists and their own music. He and a fellow riveter, Dave Steel, started a garage-punk band in order to make something more authentic. “I thought, ‘why should we listen to Bob Henley and Bob Seger telling stories of the working class, when we could do it ourselves? It might not be commercially popular, but it would speak from a more genuine source’,” he recalls. It only lasted a couple of years, but Hamper remembers, “we were doing it to make a point. These would be our songs.” 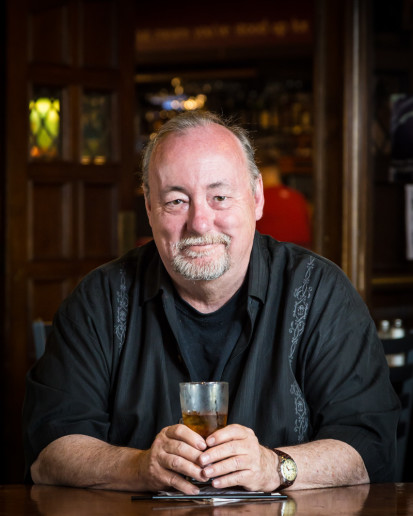 Hamper was also influenced by poetry, one of the most musical forms of writing. “Rock and Roll was first, but poetry was a big thing in my life,” he shares. He still remembers the first book of poems he ever read, “I went to Catholic school and the nuns would take us to the library and you had to check out a book,” he says. “I saw this really thin book and thought, if I have to read, might as well be this.” Turns out the book was Wind Song by Carl Sandburg and “something just went off, an explosion of a grenade” that set off a chain of voracious reading.

He was especially surprised when he learned that a collection he later checked out was by Flint native and UM-Flint professor, Danny Rendleman. “It wasn’t until the third time I checked out Signals to the Blind that I read the back cover and realized the author was from Flint, and my mind was just blown – this guy lives in our midst!”

While he started out writing poetry and painting houses, Moore says, “he decided one day that no one was going to see the glimmer of creativity in him.” But Hamper gives credit to Moore for pushing him into writing about his shop days. The two met after Hamper submitted album reviews to The Flint Voice around the 1980. “Because I’m aggressively apathetic, he would spur me on,” he says of Moore. He recounts that Moore’s own father was a shoprat. “Michael had a real desire to know about the factory and the plight of the workers – I was like his eye on the inside,” Hamper says.

He would tell Moore stories about shop life that were “either hilariously funny or excruciatingly sad, or both,” and Moore felt they needed to be told. “That is where I really took off as a writer,” Hamper insists. “Because every day, I was an in-the-foxhole reporter, going to the front lines.” He carried a little notepad in his back pocket and made it part of his daily mission: “eight rivets, one bracket, and two paragraphs.” Afterwards, he would “go home, drink beer and clickety-clack like Bukowski.” The next day, he would have “like, two good lines” which would become Rivethead.

Moore also launched Hamper into his first Radio show called “Take No Prisoners” that played Flint’s underground music of the 80s and 90s. Moore and Hamper pitched the idea with the manager of the public radio station, that “didn’t really have any alternative rock and roll show.”

The manager hated the new wave punk and hardcore music, but agreed to put them on Friday nights and “Take No Prisoners” was born. The launching of which, perfectly aligned with the opening of Doug Earp’s Wyatt Earp Records on Corunna Road. According to Hamper, Wyatt Earp, “became sort of the mother ship – the hub of everything.” Doug would stock the records the kids heard on the radio show. “Doug did so much for the scene, behind the scenes and putting on shows – it was an extremely vibrant time for underground music in Flint.” 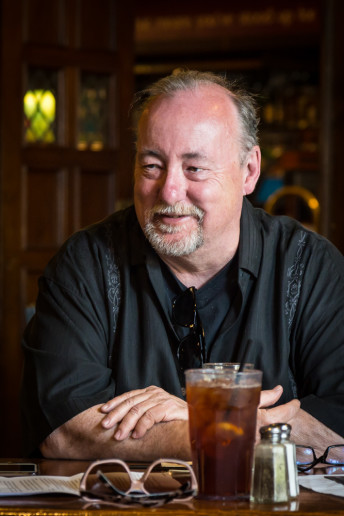 At Hamper’s current gig, listeners can hear the culmination of his music as it’s shifted through the years. “Soul Possession” was soul and funk, but he recently returned to what he calls “more or less a “Take No Prisoners” playlist of the old days, a mixture of things from over the decades.” The first record he fell in love with was “All Day and All of the Night” by The Kinks, but Hamper has really been digging into the underground music scene for years. His collection grows from blogs he follows and contributions from friends and other music lovers.

In his consistent pull toward authenticity, his taste in music has shifted, which has resulted in “Head for the Hills,” his show focused on American Country. Although he used to abhor country music, he realized that a lot of “old, country hillbilly music was really authentic, American punk music. It was unvarnished, raw, with mistakes in the recordings, and it spoke to me in its genuine nature and authenticity,” Hamper shares.

Similar to the way Hamper is still gathering fans of authentic music on his radio shows, Rivethead is still finding audiences that relate to his story. He believes the interest continues because there isn’t another “account of the automotive plant that was unflinchingly realistic, written from a common shoprat’s point of view.

I tried not to hold anything back, and if you give people something honest, they can relate to it,” he states. Hamper says some of the most satisfying letters he receives come from college students saying, “you know, my dad worked 25 years at Ford or GM and I never had a real appreciation of what he went through every day.” He adds that although not every shop experience is the same, it gives people one view of what it’s like, “because one shop is pretty much the same as another.”

The Future for Rivethead

Even before the book came out, there was buzz about a movie deal. Over the years, the rights have been bought, projects started and fell through and now finally, last fall, Hamper signed a contract with the Starz TV Network for the rights to turn Rivethead into a series. “Although, you never know,” he says. “It’s looking more positive than it has at any point in the last 15 years, so hopefully.” 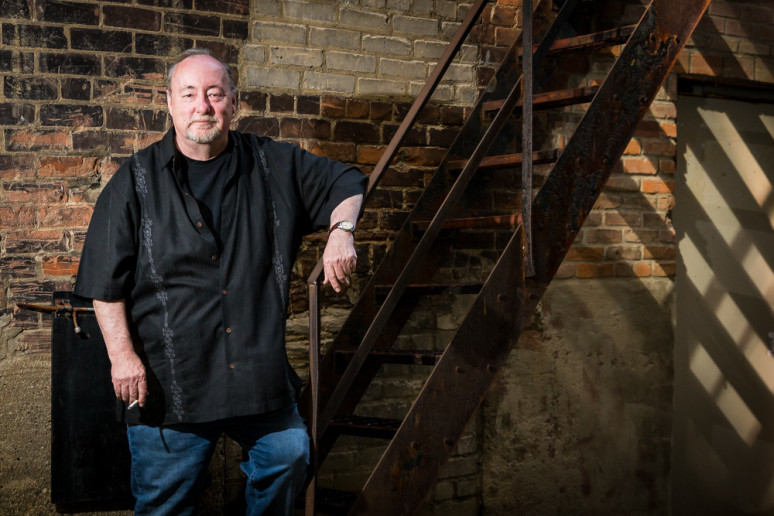 Hamper recounts the Rivethead epilogue: “I remember the day I went back to visit everybody, there was this overwhelming feeling that I had deserted the gang,” he says. But, the last two years he worked for GM, he was in a battle with his health. He remembers being so heavily medicated that, “it literally became dangerous, but it was the only way I could keep my head intact after the panic attacks started.”

The family history of shop work was something he took pride in. “I didn’t really want to leave,” he says. “One grandfather worked there 44 years, the other about 32 years, and not getting my 30 years in felt like I was letting my family down.” Hamper decided that his contribution to the family name was to give exposure to the life of an anonymous shop worker. “I had a drive in me to have at least one Hamper’s story on record, because you could work there for 40 years and nobody is ever going to remember that.”