On April 12 1861, General Beauregard of the newly-formed confederate army, opened fire on the Union boys stationed at Fort Sumter, Charleston, South Carolina, beginning the bloodiest conflict fought on U.S. soil – The Civil War. Three days later, on April 15, President Abraham Lincoln issued a proclamation calling for 75,000 volunteer soldiers to help quell the Southern insurrection. Without hesitation, volunteers formed ranks which included a noble group of men from the growing city of Flint, Michigan – the Flint Union Greys. Thus began a journey of the Flint organization that would take its members through many battles and uprisings, starting in the Civil War until the group’s dissolution immediately following its deployment in WWI.

The Flint Union Greys were organized in 1855 in Flint to provide a militia presence in and around the city. The group’s initial and only true Captain, William R. Morse, (along with First Lieutenant, William Turver and Second Lieutenant, James Farrand), trained his men fervently in the event of a future skirmish, but few in the order knew what the future had in store for them and, when the nation made its call to arms in 1861, the Flint Union Greys responded with gusto. The group packed up and traveled to Detroit, where they joined the Union army as Company F of the 2nd Michigan Infantry Regiment. The scent of battle was in the air and the 2nd Michigan Infantry was soon called south to find it.

Before the war, a traveling bible salesman by the name of Frank Thompson landed in the city of Flint in an attempt to find more fertile ground for sales. While boarding in Flint, Thompson met and befriended Captain Morse. When war broke out in 1861, Thompson immediately joined the Flint Union Greys and traveled with the company to Detroit and beyond. 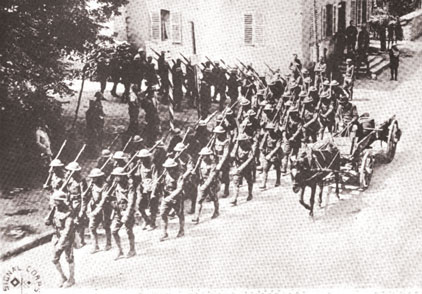 The Flint Union Blues, Circa 1917.
Photo from: University of Michigan

The 2nd Michigan Infantry was quickly dispatched from Detroit to just north of Manassas, Virginia, with the charge of covering the Union army’s retreat from Confederate General Beauregard’s army, in the first Battle of Bull Run. During the battle, Private Thompson was working as a battlefield medic and was left behind enemy lines during the retreat. Only through sheer luck was he able to escape and meet up with Company F and Captain Morse. It was after this battle that Private Thompson would become a spy and courier for General-in-Chief, George McClellan of the Union army.

The Flint Union Greys then took part in the Siege of Yorktown. It was there that Private Thompson slipped behind enemy lines for the first time – by posing as a woman. He was able to get a complete layout of the camp, as well as fortifications and the number of troops. He also found a confederate spy giving the South army the key to all of the Washington defenses. As the Confederate forces slipped from the battlefield in the cover of night toward Williamsburg, Private Thompson was able to find his way back to Union lines and report to McClellan. The Union army and the Flint Union Greys decided to pursue the enemy to Williamsburg.

Williamsburg would bring about a great loss to the Flint Union Greys, when Captain Morse was grievously injured. While leading his men into Battle, Morse took a musket ball to the leg just below the knee. Unable to continue, he was carried from the battlefield by his men, including Thompson. The war was over for Captain Morse – he would survive and continue on with the Greys after the war. As an award for all of his duties during the war, he was raised to rank of Major. Major William R. Morse died in 1899 and is buried in present-day Glenwood Cemetery, in his hometown of Flint.

Despite the loss of Morse, the Flint Union Greys would continue fighting in the Civil War. At the second Battle of Bull Run in 1862, they were again called to cover the retreat of the Union army from the Confederate Army led by Major General Stonewall Jackson, and James Longstreet. The Flint Union Greys were integral in the escape, with Union Generals decrying the heart and bravery of the men from Michigan. There, Private Thompson was tasked with carrying a most important piece of information from Washington to General-in-Chief George McClellan. The account of Thompson’s travel and injury is recounted in his letter to Richard F. Halstead of Flint:

When I had accomplished about half the distance between Washington and Centerville, I saw a chance to cut off a mile or more, by leaving the road and taking a short cut, which I thought best to take advantage of, but after having gone a considerable distance from the road, I found myself confronted by a very wide ditch, which I attempted to cross; but instead of leaping across it my mule reared and fell headlong into it, and I was thrown with such force against the side of the ditch, that I was stunned and unable to escape further injury from the frantic efforts of the mule to extricate himself from such an unpleasant position.

On crawling out of the ditch, I realized that I had sustained severe injuries. I had no use of my left lower limb. I felt sure it was broken, and the intense pain in my left side, and breast, made me feel sick and faint; while the bare thought of the undelivered mail drove me almost frantic.

I then started for the battlefield with the utmost speed that I could endure, and after extreme suffering, I reached our troops, who had not yet become engaged in action, and after delivering the mail I went to the rear where I found Dr. Vickery with the hospital corps and ambulance.

After the battle was over and the Army had gone into camp, I found myself in a more serious condition than when the accident occurred. I had received internal injuries which caused frequent hemorrhage from the lungs. Consequently, I took the utmost pains to conceal the facts in the case and silently endured all the misery and distress which the unfortunate accident entailed upon me, rather than to be sent away from the army … 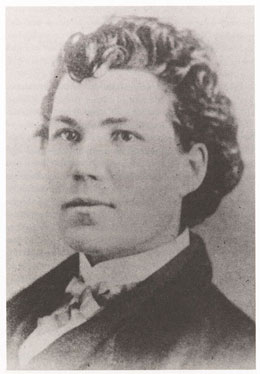 Despite his injuries, Private Thompson continued with the Flint Union Greys until 1863, when he contracted malaria in Kentucky. At that time, he deserted the army fearing discovery – if he were to be examined by a doctor, his secret would be revealed: Private Frank Thompson’s real name was Sarah Edmonds, and being found out to be a woman would mean arrest. Edmonds would later be named to the Michigan Hall of Fame and recognized as a pioneer of women’s rights. (It is not known whether the boys from the Flint Union Greys ever knew that “Frank Thompson” was indeed a woman. Her secret was known and kept, for sure, by one man: First Lieutenant William Turver. It seems hard to believe that Captain Morse was also kept in the dark as to Thompson’s true identity, but no historical proof exists that he knew her secret.)

Shortly after the conclusion of the Civil War, the Flint Union Greys returned home tired, yet heroic. Traveling with them was Captain Oscar F. Lochhead from 2nd Michigan Infantry, Company H. As soon as the boys returned home, the order was dissolved and a new one was soon formed by Major Morse and Captain Lochhead in 1872, with Major Morse as active Captain. Morse soon retired and Captain Oscar F. Lochhead took over the order.

The Flint Union Blues continued to drill and maintain their discipline. The Blues joined the 3rd Michigan Infantry, designated as Company C. Captain Lochhead became Colonel of the 3rd Infantry in 1875, leaving the Blues in the command of Captain George E. Newall. Oscar F. Lochhead lived quite a long and illustrious life and died in 1926. He is buried in Flint’s Glenwood Cemetery.

The next decade remained quiet for the Blues until 1898, when the order was called into action in the Spanish-American War. They were sent to Cuba and took part in the Battle of Agnadoras. A number of members were lost in the battle, the first being Ablino J. Babcock. He was killed at Siboney and is buried in Evergreen Cemetery in Grand Blanc.

After ten weeks of fighting, the war had ended, sending our boys back home. The Flint Union Blues would continue to maintain military precision and under new Captain Guy M. Wilson, the order would be called upon to help quarantine the State Institution of Lapeer, and was sent to Copper County to help maintain order during a worker’s strike in 1916. 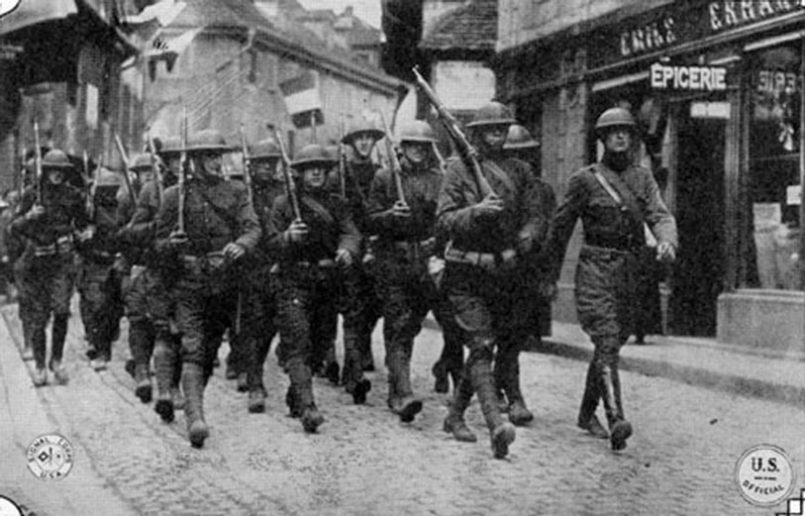 The Flint Union Blues protecting our country in WWI
Photo from: 32nd Division.org

Soon thereafter, the Blues were called to arms for the final time in WWI. New Captain Thomas Colladay would lead his men to the Mexican border to guard against an invasion of our southern borders due to the Zimmerman Telegram uncovered by British Intelligence in 1917. (The Zimmerman Telegram was a secret communication that proposed an alliance between Germany and Mexico, should the U.S. enter the war.)

At the conclusion of WWI, the Flint Union Blues were sent home and mustered out of service, dissolving as an organization soon thereafter.

The Flint Union Blues represented the proud ability of the citizens of Flint to answer any call needed to protect those they loved. They fought and died for their city, state and country. The illustrious organization was the embodiment of the grit and determination that continues today in the spirit of the city.