Friends of the Flint River Trail kicked off its Sunday afternoon free bicycle-riding season in May, and on July 12th, My City Magazine caught up with about a dozen of the thirty-five FFRT riders who meet at 2pm at the old Flint Famers’ Market parking lot. Before the ride begins, cyclists of various ages – 15 to 85 – and various skill levels – beginner to advanced – pump up tires, strap on helmets, adjust pedals, attach water bottles and discuss the route. “Today, we’re riding to Stepping Stone Falls and we’ll get ice cream on the way back,” says Vicki Sacharski, a Flint resident who has ridden with the group for six years, and serves as a substitute lead rider on the course. Sacharski explains the route to everyone and keeps her eyes open for road hazards, potholes, or anything that might be a danger. “When we cross intersections, we try to keep everyone together,” says Sacharski. As the lead, she calls out commands such as “walker,” or “single file” to let the riders know what to expect.

On this 80-degree day with a slight breeze, the ride to Stepping Stone Falls is pleasant. However, it’s the loop back to the McDonald’s on Stewart Avenue and Dort Highway for ice cream that is highly anticipated. “Once a month, one of our rides includes a stop at a local ice cream shop,” says Sacharski. As a clipboard is passed around to collect the names and zip codes of the riders, which reveals close to 35 different cities, Dave Beaulieu, a retired General Motors employee from Corunna, is putting on his tool belt. The ten-year riding veteran is going to be the “sweep” on the ride. “I’m the guy at the very back,” he says. “I help out riders if they get a flat tire or their chain falls off. I have tools, extra inner tubes, a patch kit, and an air pump,” he says. The FFRT operates on a “no rider left behind” policy. Beaulieu keeps alert for injuries or needed repairs. “I can do minor bike repairs and usually get a rider back on the trail. This is my way to help out Jack and Bruce – the two guys who established this riding project.” 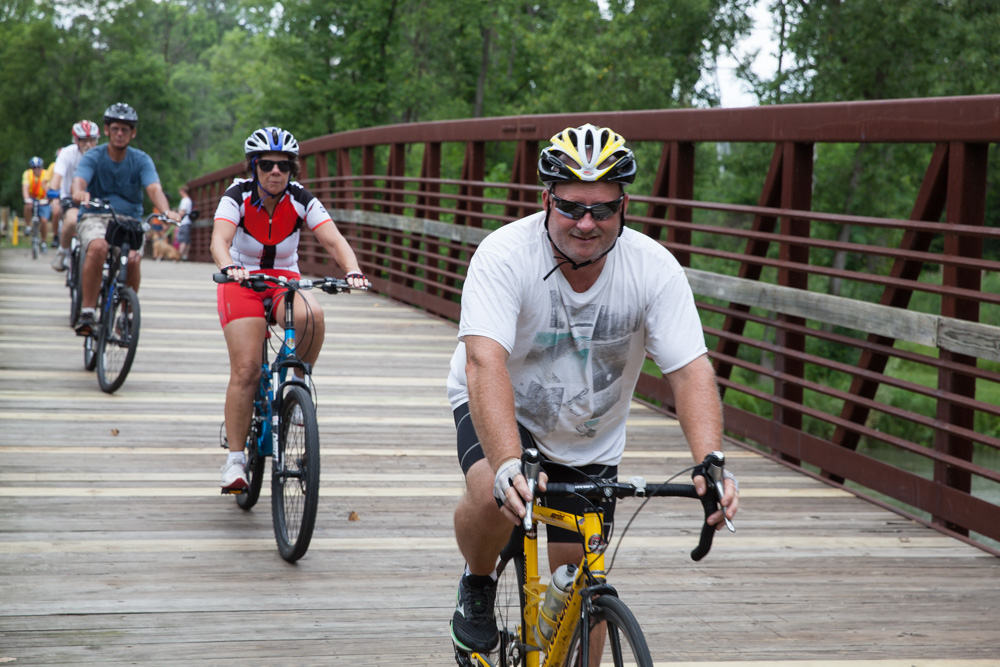 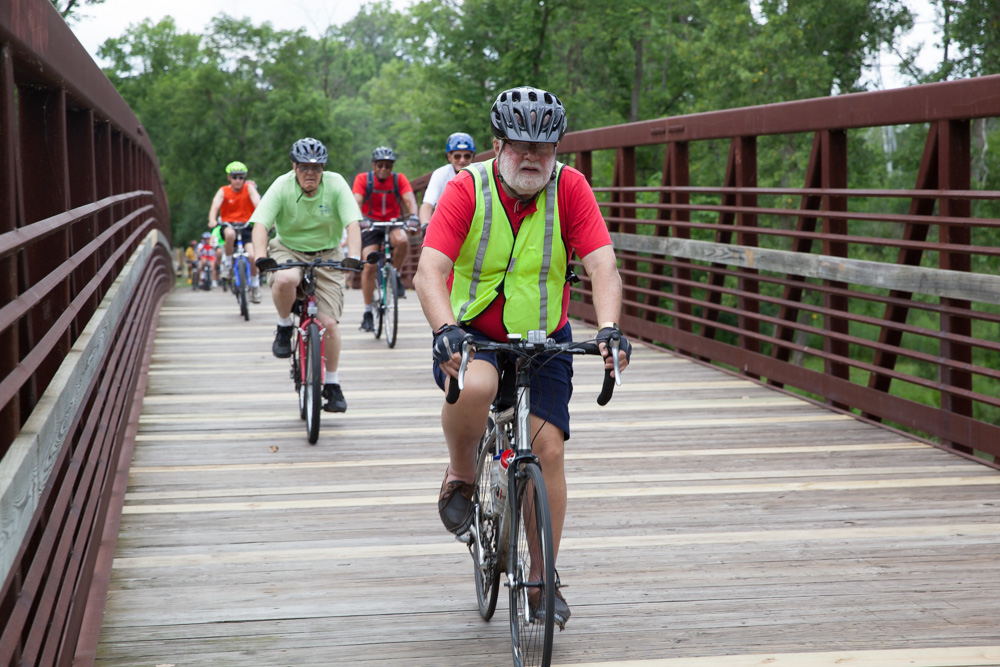 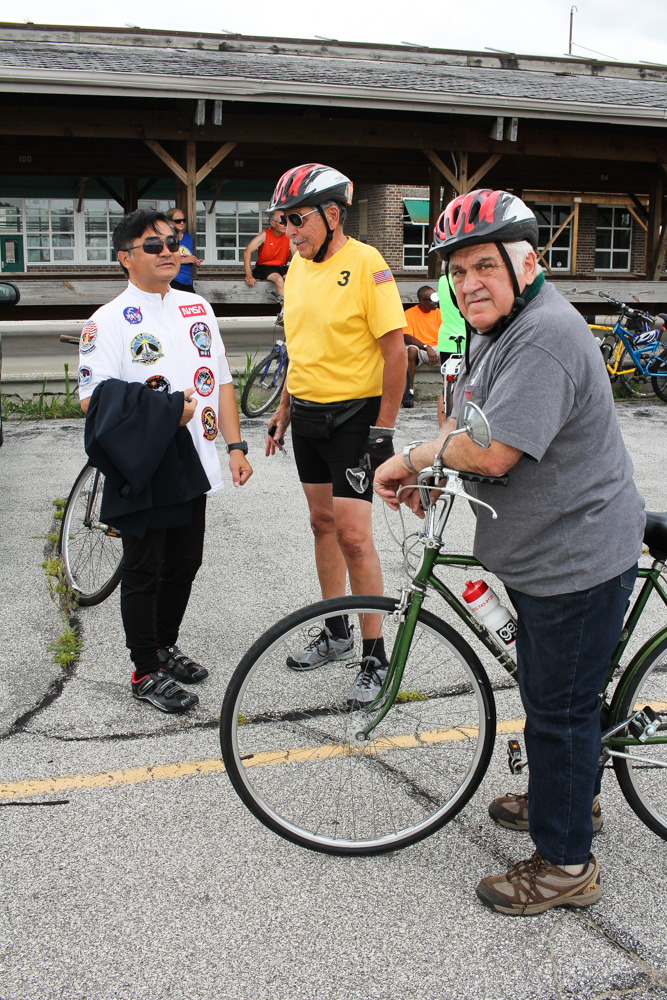 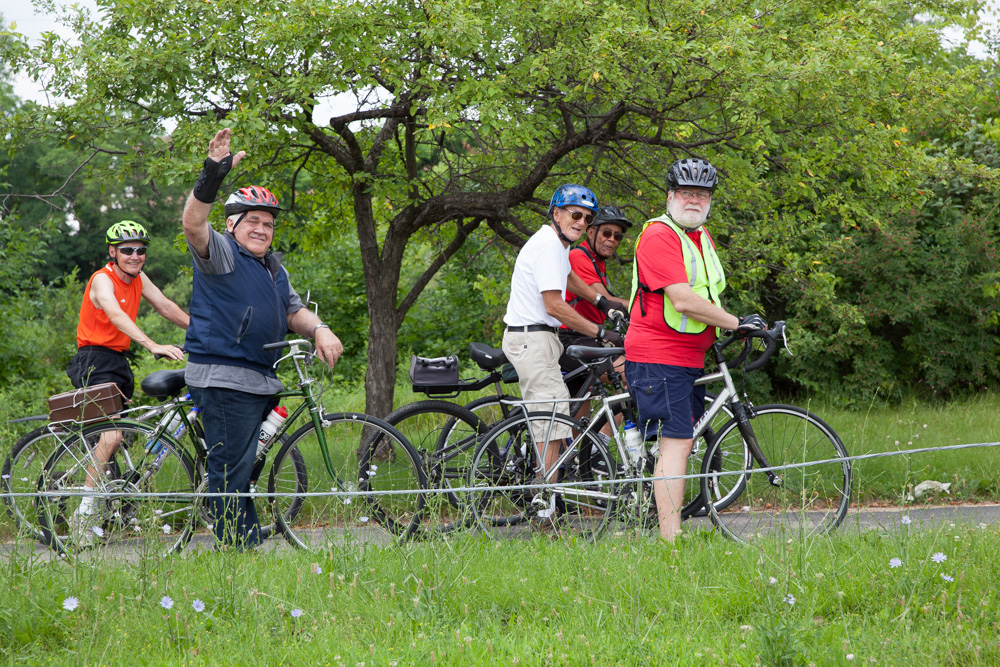 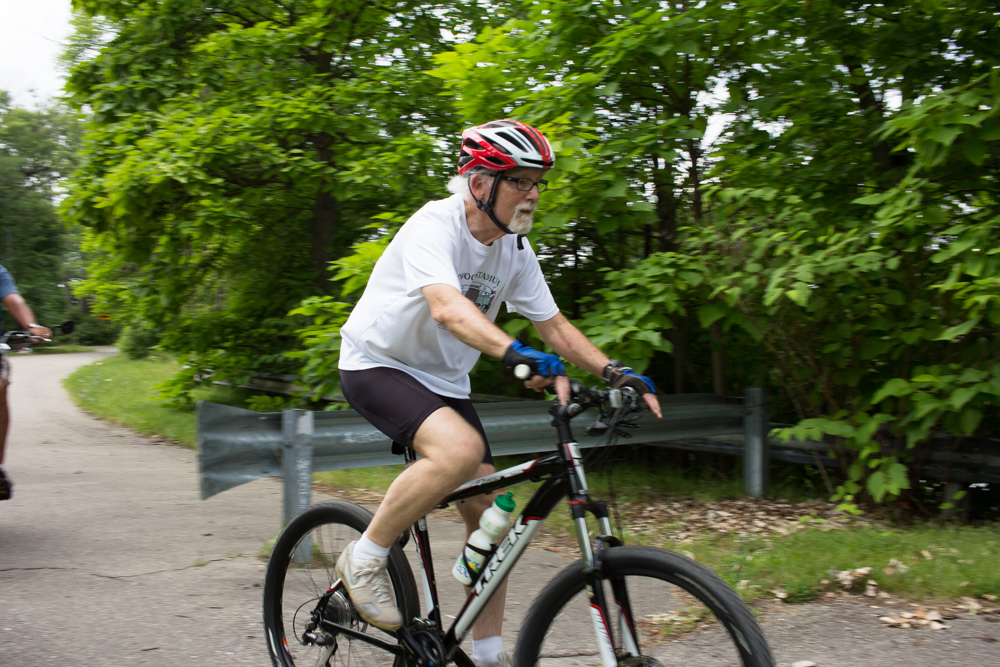 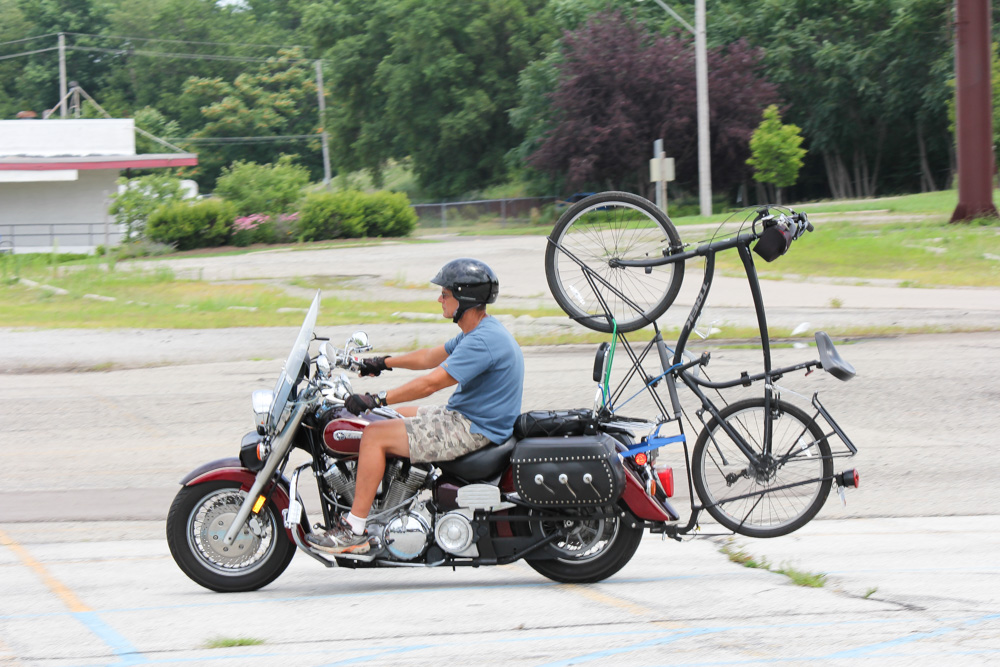 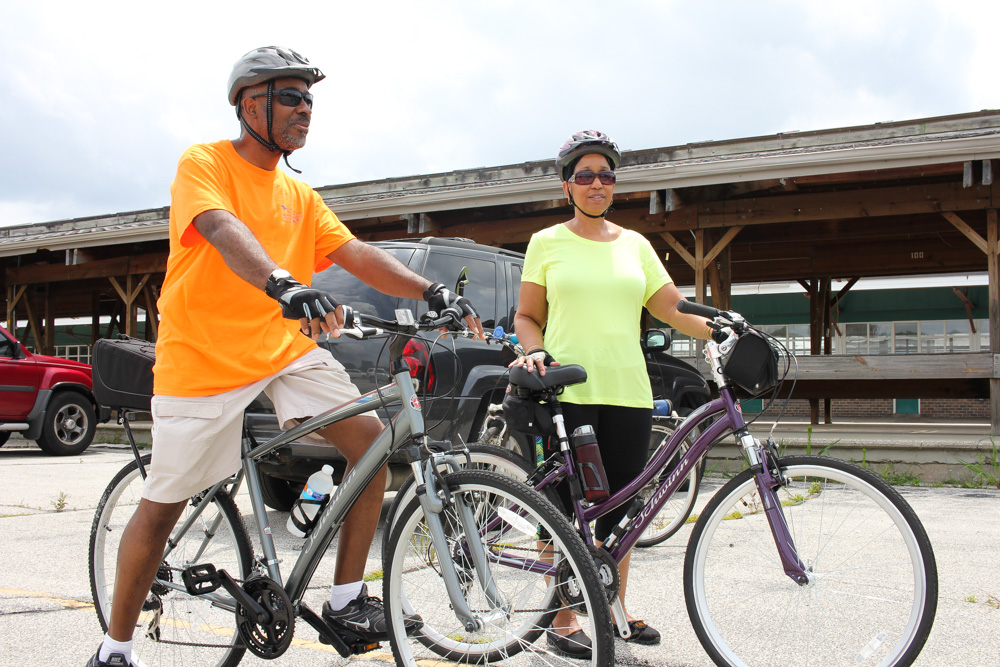 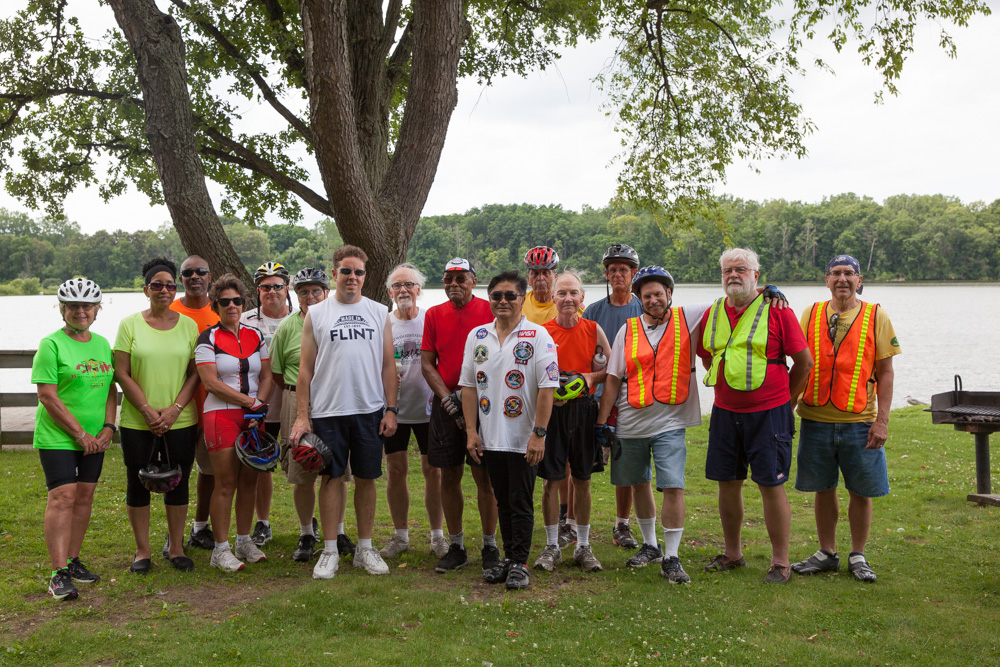 Jack Minore and Bruce Nieuwenhuis are FFRT trail activists and energetic cyclers who typically lead the Sunday rides. Looking back, they both give credit to Steph Diana, a former Mott Community College teacher and friend who called 18 years ago to say, “Hey, did you guys know there was a trail along the Flint River? We should start a riding group.” So they did. Bruce says the first year of the ride was only five or six miles with about six riders. The trail, the route, and the group have definitely developed over the past two decades. “The fact that we’ve grown from six riders to 40-60 riders illustrates the importance of building awareness,” he says.

Minore, who serves on the board of Michigan Trails and Greenways Alliance (MTGA), is an advocate for trails in general. “Besides recreational use, trails are important to many communities for transportation,” he says. “For example, you might see people dressed in a McDonald’s or Burger King uniform using the trails to get to work. Communities with trails often reap economic benefits because businesses, restaurants, bike shops, and grocery stores pop up near the trail sites.” Towns and cities with trails can enjoy enormous health benefits. “Statistically, they have lower obesity and diabetes rates,” he says. He noted that property values tend to be higher near trails and are appealing to home buyers.

Jack and the FFRT have been influential in the expansion of the trail. “We worked to obtain a city grant to expand it to Dort Highway,” he says. “Later, we advocated expansion to Carpenter Road where it connects to the Genesee County Park System. The goal to grow is front and center. “The next phase of expansion is Chevrolet and Corunna Roads,” he says. Jack and Bruce are strong backers of FFRT and encourage involvement. “Getting the word out is ongoing and we continually try to invite new riders,” says Bruce.

Eighty-five-year-old Bill Baker of Flint isn’t a new rider, but probably the group’s most mature rider. He started bicycling in 1995 after retiring from General Motors. He dismisses his age. “Oh, I hear about people much older who are still riding,” he jokes. “So, as long as I’ve got endurance, I plan to stick with it, and I don’t mind digging deep into my pocket to support the trails.” Bill recruits others to join the FFRT. “I’m not as dedicated as some,” says Ken Johns, 82, of Flint Township, “But I like being involved. I’ve known Bill Baker for many years. He introduced me to the Friends of the Flint River Trail. It’s a well-supported and congenial group.”

Unfortunately, Dave Beaulieu found out after the ride about one rider’s mishap. “I heard about a young rider who had a flat,” says Dave. “Somehow we missed him – we would’ve fixed it for him. His parents ended up helping him.” A few weeks ago, Dave was busy changing four flat tires. “We had glass on the trail,” he says. “Four of our riders got caught up in it. A group of us went out the next day and cleaned it all up. Taking care of the trails is a priority.”

Thomas Brown, 15, a sophomore and trumpet player at Flushing High School, was the youngest rider on July 12. Some would say he was the unluckiest rider. “A few miles into the ride, I knew I had a flat tire,” he says. “I could feel it. The rim was bent. It wasn’t safe to ride, so I didn’t get to ride the whole loop. I ended up sitting at a picnic table under a tree near the boat ramp at Bluebell Beach while my parents finished the ride.” His parents, Brenda and Marty Brown, have enjoyed rides with the FFRT in the past and earlier in July, they participated in a Lansing bike ride. “We love seeing the Flint River while riding our bikes,” says Brenda. “It’s not what most people expect of Flint. There are quiet streets, beautiful scenery, and we really appreciate the ‘sweeps’ who block off traffic so the group can ride across the roads safely. It’s really well-organized and family-friendly.”

Ted Bristol and his wife, Debra, who live in Genesee, agree that the Sunday riding group is exceptional in many ways. The couple lives minutes from the Flint River Trail and that’s a good thing, since they’re passionate about their bike riding. Geared up in their helmets and colorful cycling attire, they average one hundred miles per week, own two types of bicycles – mountain and road bikes – and they’re considered regulars at the Sunday rides. “We love getting the exercise and enjoy being out in the fresh, open air,” says Ted, another retired GM employee. “It’s also a great place to network and find other advanced riders to hook up with for future riding events.” Throughout their marriage, they’ve amped up their athleticism by participating in triathlons, but it’s biking with FFRT they prefer. “It’s better than the roads,” says Debra. “They’re safer and definitely more scenic.” The 21-mile asphalted, picturesque walking and biking trail wraps around the Flint River near Grand Traverse and leads out to Bluebell Beach in the Genesee County Recreation Area. 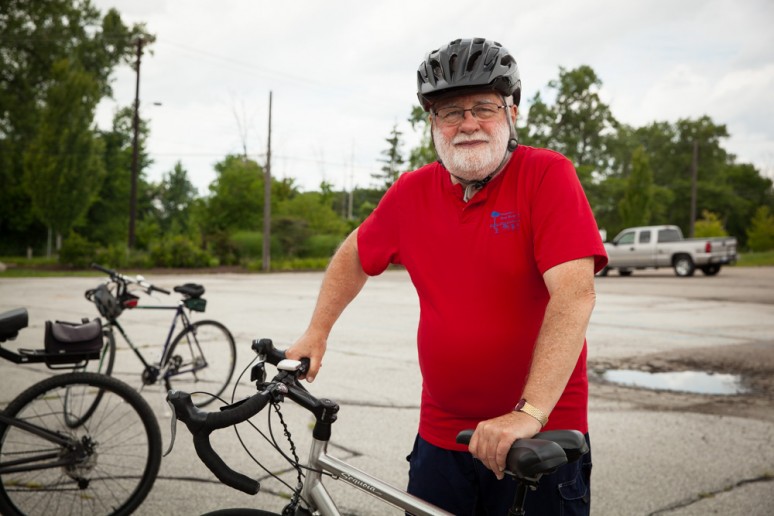 Another bicycle route the group is known to take extends to McLaren Hospital and ends up being about an 18-mile trip. “Whichever route we take, the trail takes us through different areas where we’ll see anything and everything from older neighborhoods, densely wooded areas, grassy areas, open fields to downtown life near U of M, Kettering and Mott Community College, wildlife, rabbits, deer and other animals – it’s all out there,” says Ted. The Bristols started their morning cycling session in the Davison area before meeting the FFRT. “This morning we rode 22 miles on some country backroads,” he says. “This afternoon, we did about eight or ten miles with the FFRT, which is more of a pleasure ride for us,” he says. “It’s a slower-paced ride and we often call it our ‘camaraderie ride.’” The Bristols ride various Genesee County roads and trails, and especially enjoy talking to other riders. “Today’s ride was great,” says Ted. “It was hot and sunny out and we had a few new riders and that’s always good to see.”

One of the new riders, Chris Larner of Lennon, saw the ride advertised online and at Assenmacher’s Cycling Center. “It’s been in the back of my mind for quite some time to do it,” says Larner, who candidly admits he is looking to keep in shape and lose weight after enduring a few cardiac episodes that left him being banned by his doctor from his former favorite things – competitive triathlons and intense sports. “I want to do this ride as much as I can,” he says. “I’ve been looking for a way to be more involved in a light, social ride like this, especially since I’m trying to deal with my heart condition.” He says the FFRT immediately offered him acceptance and a generous welcome. “Instead of being on the road riding by myself and thinking about my health issues, I get a nice distraction from those thoughts and I get to meet new people who have the same goals as I do – to socially ride bikes and work on being healthy.” He appreciates the optimism of the FFRT riders. “Whether you’re a high-level rider or a low-level rider they’re accepting of you,” he says. Although Larner and his wife, Angela, sometimes take advantage of biking on Flushing trails with their two young children ages 6 and 7, he says riding the FFRT on Sundays is definitely going to be something he makes time to do. “It’s relaxing,” he says. “But mostly, it’s a nice way to end my weekend.” 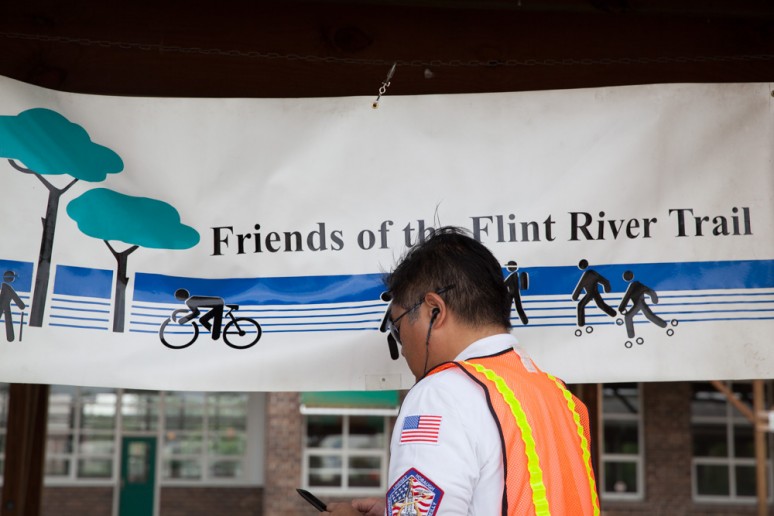 The Friends of the Flint River Trail is a chapter of the Flint River Watershed Coalition, and is open to anyone who likes bicycling. The free Sunday rides operate through October and start at 2pm at the old Farmers’ Market parking lot. In addition, there are monthly Saturday rides planned at other trails throughout mid-Michigan. For more information, visit flintriver.org, michigantrails.org, find FFRT on Facebook, or e-mail Bruce Nieuwenhuis at bnbaton@gmail.com or Jack Minore at jacksonmin@aol.com.

“Getting the word out is ongoing and we continually try to invite new riders.”
Bruce Nieuwenhuis