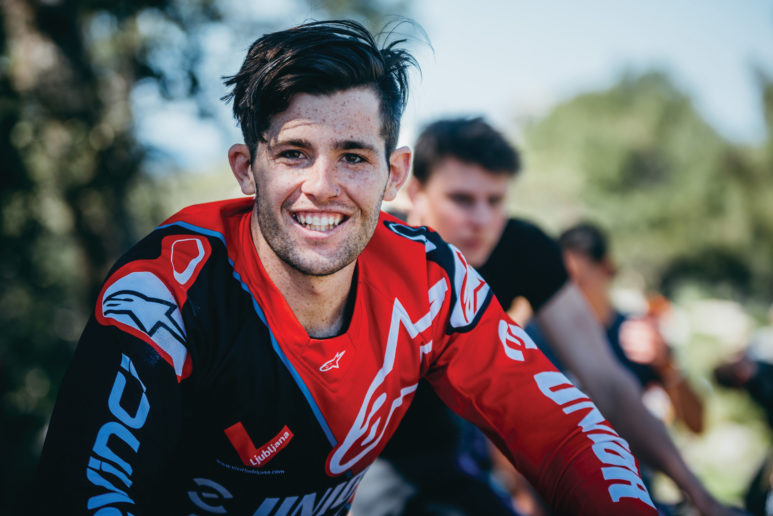 For middle-school-aged Dakotah Norton, riding his BMX bicycle was always an exhilarating experience. Whether tearing around his Davison backyard negotiating jumps he constructed, catching air at area skate parks or immersing himself in all that nearby Richfield Park BMX had to offer, the young Norton felt most at home, most free in the saddle of his bike. “In many ways, I’m still just that kid on his bike tooling around the backyard,” Norton says. “Being on my bike wherever, whenever, has always been exciting for me. That has not changed. It’s what I love to do.”

Norton’s zeal for seeking non-motorized thrills on two wheels has now taken him to a world-class level. Flash forward nearly a decade and a half to April of this year, and the now 26-year-old is more than 4,500 miles away from his Davison backyard in Losinj, Croatia, sitting anxiously in the starting chute of his first UCI World Cup downhill mountain bike race as a member of the Unior Devinci Team. He has traded the BMX for a custom-built Devinci UDFR Wilson 29.

Downhill mountain bike racing pits riders against the clock. The winner is the one who negotiates the course and all its obstacles, from top to bottom the fastest. 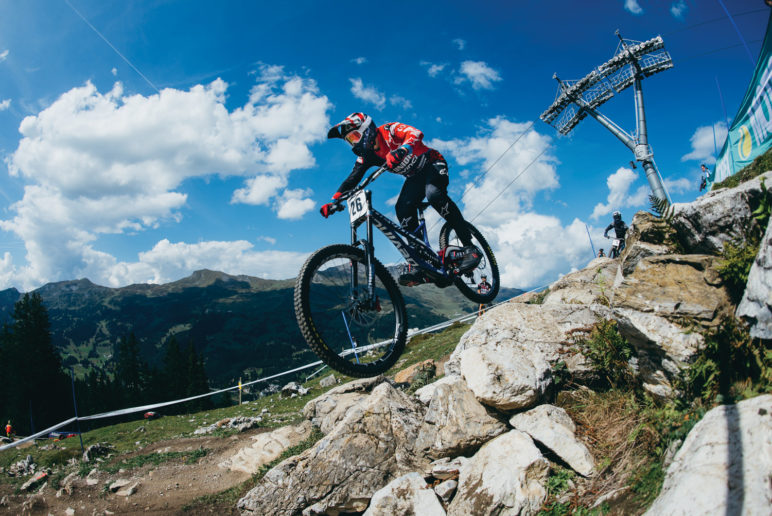 Norton rockets out of the gate onto a course that drops nearly 800 feet in just .8 miles, immediately soaring over a pair of jumps. He glides around some sharp turns, handles tricky tree roots and powers through a lengthy rock section that will send most riders over their handlebars while ardent spectators blow horns, ring bells, shake rattles and rev devices that sound like chainsaws. The dirt trail eventually gives way to a city street as Norton speeds toward the finish line near the Adriatic Sea, reaching a top speed of nearly 30 miles per hour. He shoots through a narrow alley and crosses the finish line in two minutes, 21.82 seconds, moving him into first place against a field of the world’s best. Norton throws up his arms and lets out a yell before greeting a well-wisher and taking his place atop the podium. Norton remains there for roughly an hour as rider after rider falls short of beating his time. Eventually, Norton drops to fifth place, but the top-five finish means he will occupy a place on the awards podium for the first time in three seasons of World Cup racing. 

After receiving their awards, those on the podium spray each other with champagne before Norton, whose best previous World Cup finish was 14th, somersaults into the bay. He emerges from the water dripping and pumping his fist. “I went into that first World Cup event this year believing I was ready to achieve my first podium,” recalls Norton, whose feat was chronicled on the Olympic Channel and Red Bull TV. “It was exciting to really show my new team and the world what I’m capable of – competing well against the top riders in the world.” 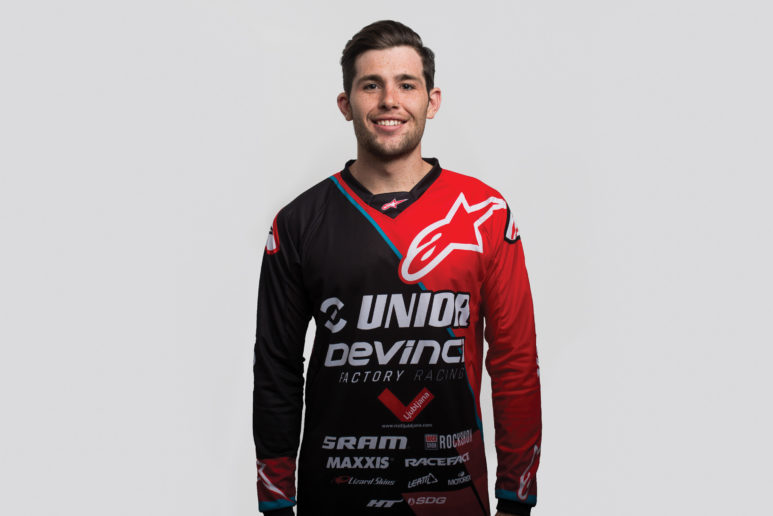 While he may not always top the world’s best, Norton feels like he’s on top of the world thanks to the life he now leads. This year alone, he traveled to eight countries, competed in 15 races and placed in the top 10 six times. During the European portion of its racing schedule, his team journeyed to events in a rented van, staying in modest accommodations and experiencing several countries up-close. Best of all, racing for Unior Devinci has allowed Norton to concentrate exclusively on taking his career to the next level. He’ll no longer have to work like crazy during the offseason to finance his career while also finding time to train. “This is the perfect life because I am traveling the world, racing my bike with some of my best friends,” says Norton, whose Devinci teammates hail from Slovenia and New Zealand. “I love downhill racing because how well you do is solely up to you. I now have friends in about every corner of the world and my eyes have been opened to different cultures. It’s broadened my outlook about how other people live.” 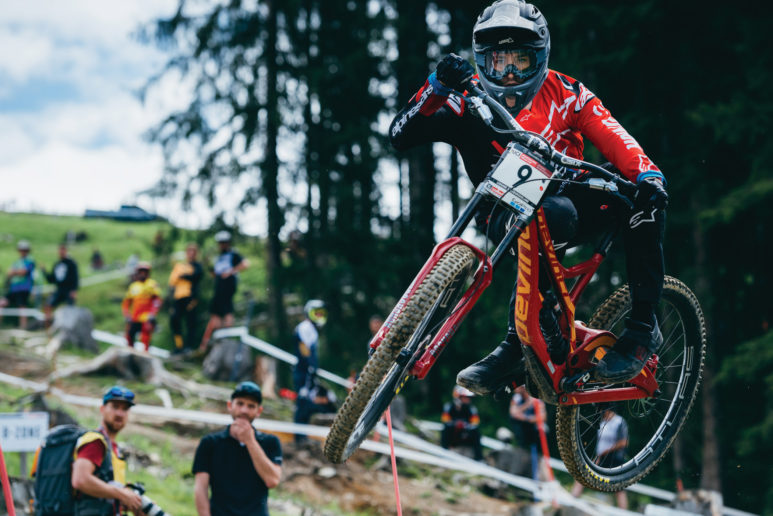 Norton’s other top results in 2018 included finishing sixth at the World Cup race in Leogang, Austria, and a pair of second-place showings in Pro Gravity Tour events at Windrock Bike Park in Oliver Springs, TN. Norton was also eighth at the Crankworx Canadian Open in British Columbia, Canada. He was 30th in a field of 138 at the final World Cup race in La Bresse, France, which left him 22nd in the overall standings – up from 37th last year. And that’s despite missing two World Cup races after injuring his shoulder during an event in Innsbruck, Austria. On September 9th, Norton concluded the season at the World Championships in the mountain-bike-crazy community of Lenzerheide, Switzerland. He finished as the third American and 21st overall in a field of 106, finishing 24 places higher than a year ago.

His own worst critic, Norton was hoping to duplicate the top-10 finishes of earlier this year. “I was hoping for a stronger run at Worlds, but I made some mistakes at the bottom, coming to a stop even, that cost me 2-3 seconds,” he says. “Not everything went my way and the shoulder injury certainly slowed me down the remainder of the season.” Unior Devinci manager Grega Stopar agrees that Norton has plenty of untapped potential. “The season was full of ups and downs and Dakotah’s World Champs result may seem great compared to last year, but we know he is capable of top 10 or even more,” Stopar says.

The first podiums Norton actually pursued were in motocross, which he took to at a young age while living near Grand Rapids, but continuing in that sport was no longer feasible after his parents divorced. At age 13, he moved with his mother and sister to Davison and turned his full attention to BMX racing, eventually becoming nationally ranked. Norton credits both motocross and BMX for laying the foundation for his future mountain bike success. His first taste of mountain biking did not occur until he enrolled at Lindsey Wilson College in Columbia, KY. Lindsey Wilson has a cycling team and, naturally, several mountain bike courses on campus. Norton borrowed a friend’s mountain bike to ride a few laps around the school’s slalom course and was hooked. He joined the squad and enjoyed a stellar college career, placing fifth twice and 10th once in dual slalom at the Collegiate National Championships. Norton was also eighth in downhill at the 2013 national championships. 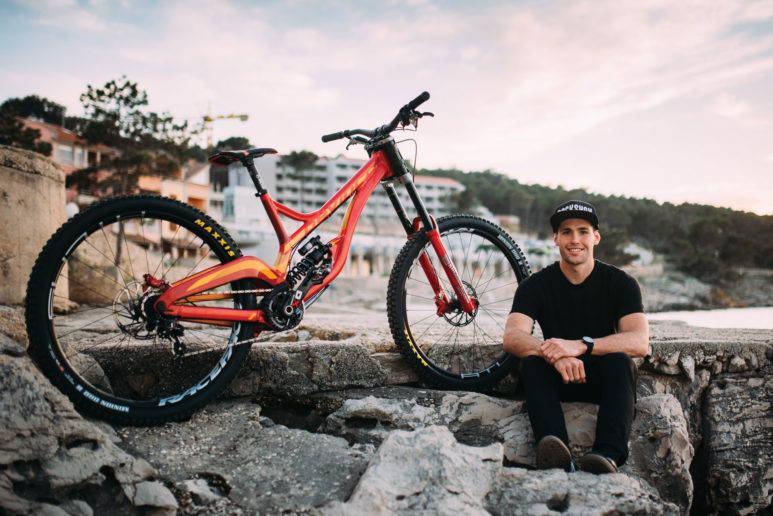 In the summer of 2015, Norton first broke through on the world stage when he was invited to compete in a World Cup event for the first time in Mont-Sainte-Anne, Quebec, which remains his favorite racing venue. “This is Dakotah’s first full year racing downhill and to be on the level he is on right now is unheard of,” then-Lindsey Wilson coach Charles Mooney said prior to the race. “His natural talent on a bicycle combined with his determination to win makes him unstoppable.” Norton did not make the final, however, crashing twice in qualifying. Undeterred, Norton was invited to the next World Cup race in Windham, NY, and finished 54th of 138 riders.

Less than a week later came the performance that put him on the map. Norton won the dual slalom race at the Crankworx Canadian Open, besting Belgium’s Martin Maes, who was second at this year’s World Championships. “I remember being completely stunned after winning, but that’s the race that opened some doors for me,” Norton says. Indeed, it did. Norton signed a sponsorship deal with mountain bike manufacturer Morpheus which provided some support as he raced as a privateer.

Norton joined Unior Devinci in February of this year. “We were looking for a new rider that has big potential, but also the right personality, and Dakotah was our man.” Stopar says. “Dakotah’s strength is that he knows what he needs to do to get to the top and has the guts to do it.”

Norton splits his offseason time between Knoxville, TN, Davison, and winter training near San Diego. He was scheduled to undergo surgery on his injured shoulder in Knoxville late last month before returning to Davison to heal until the end of the year. Once recuperated, Norton will train at venues across Michigan, including Richfield BMX. “That’s been a special place for me since my grandfather took me there when I was nine,” he says. “I hope to spend a lot of Sundays there when I’m in Davison.” Norton, who is managed by Metamora resident James McAllister, heads to California in January before getting back to Knoxville to begin racing in March. “I want to win bike races,” Norton says at the conclusion of a video produced earlier this year entitled, “Dakotah Norton: Made in Michigan.” “It’s not about money and it’s not about having people know you. It’s just finding success in your own right.” 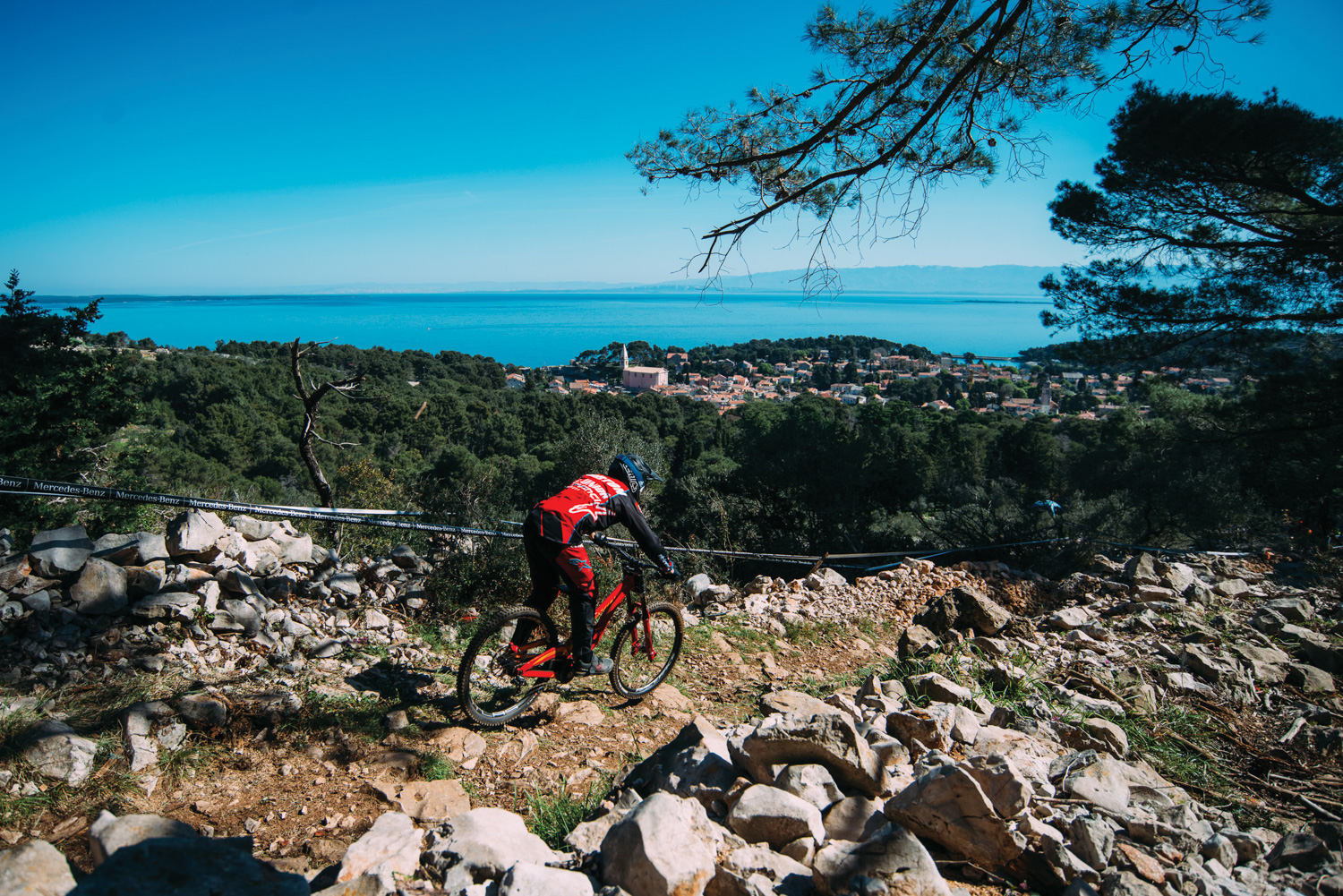 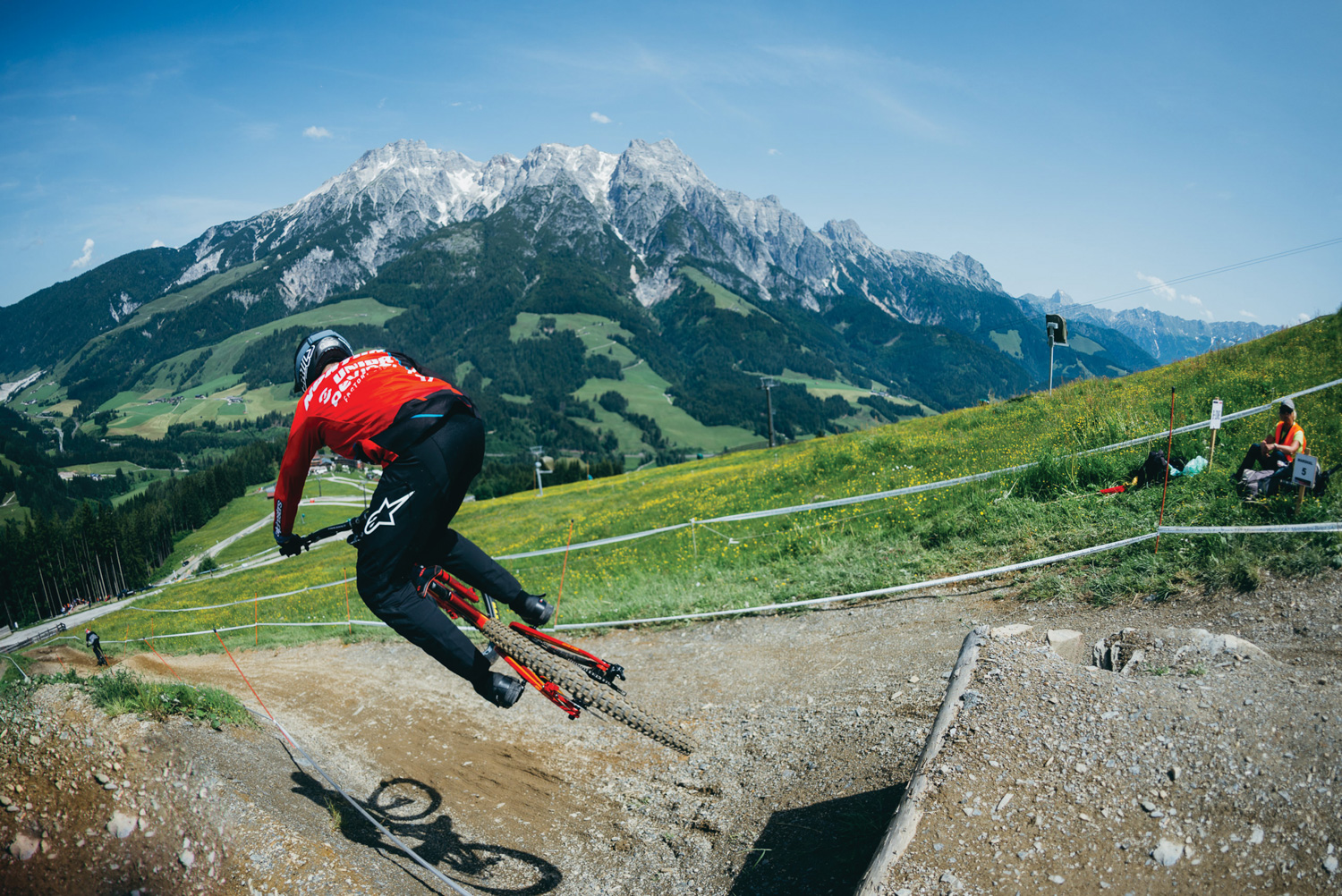 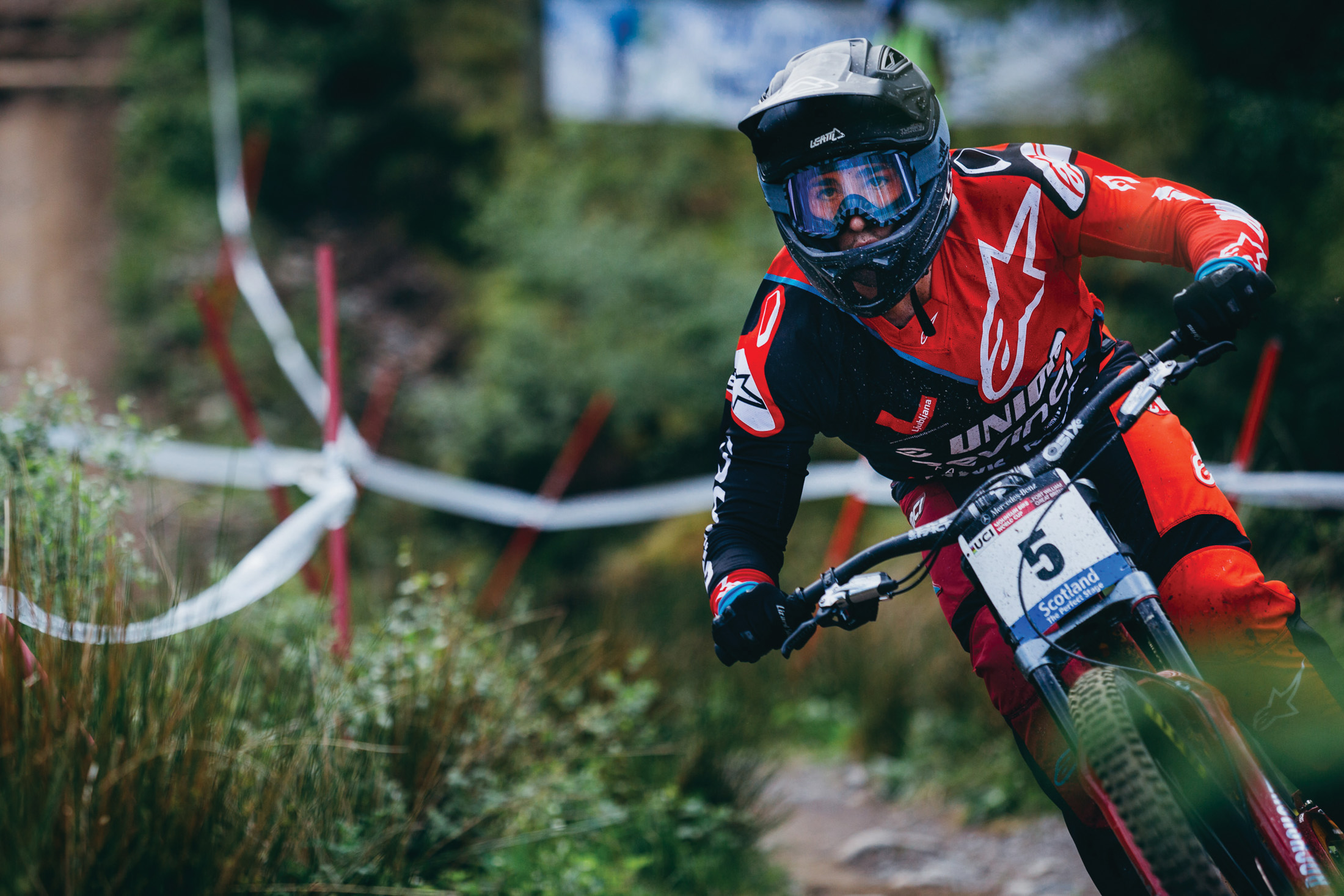 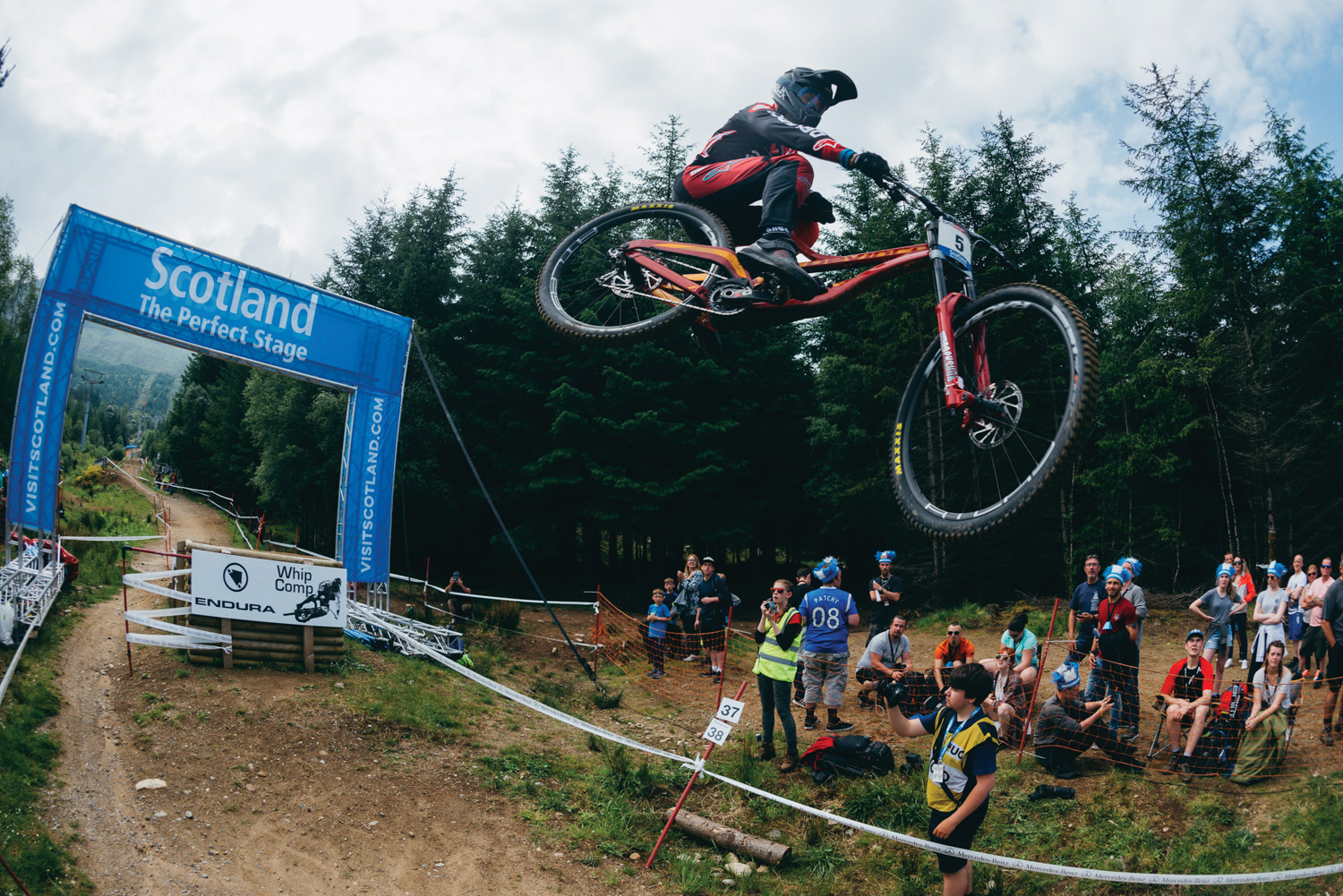