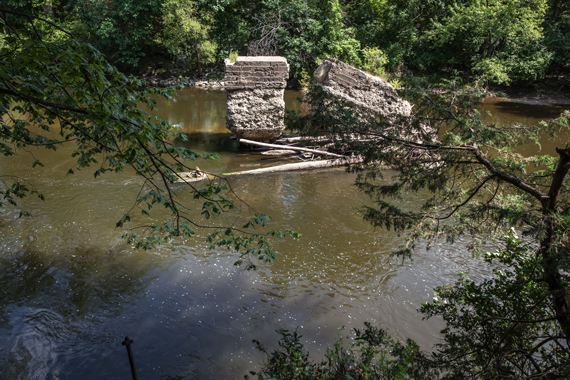 In the 5000 block of Seymour Road, the Flint River flows around two massive monoliths standing high above the water’s surface.

Made of concrete and large field stones topped with stacked stone slabs, these weathered formations have long outlived their purpose. For nearly 100 years, the river’s current has gathered dead trees about their bases as weeds sprout defiantly from their tops.

Don Wilson of the Flushing Area Historical Society says they are remnants of an old mining bridge. Citing information in the Flushing Sesquicentennial History, Vol. I, Wilson explained that the stones are what remain of a trestle used for clay-mining conducted by the Saginaw Paving Brick Co. Many feet of track once stood atop those stones, used to transport clay excavated on the east side of the river to the western side in mining cars. The contents were then emptied into railroad cars and taken to Saginaw to be made into bricks. Due to severe flooding in the eastern pit, mining operations closed sometime in 1911; about two years later, the trestle reportedly blew down in a storm. 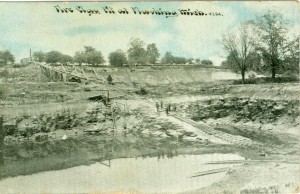 The strange stone foundations aren’t the only vestiges from Flushing’s nearly-forgotten clay-mining past. What’s left of the pit that once produced about 100 carloads of clay per month now stands as Granville Lake. Located near the Ponderosa subdivision, these clear, pristine waters served as a popular swimming hole for many years, says Wilson. ♦