The 60s and 70s were a tide of change for our nation. The chaos of the 60s reached a crescendo in 1970 when the Ohio National Guard opened fire at students of Kent State University as they protested the Vietnam war, killing four. At this point, support for the war began to rapidly erode. Public sentiment began to turn against the government and President Nixon. If anyone remained on the fence after the shooting, the release of the Pentagon Papers in 1971 made the decision easy. Despite this, in 1972 Richard Nixon trounced George McGovern in a landslide victory to retain the Presidency. His victory would not last long, as reporters Bob Woodward and Carl Bernstein of The Washington Post were already beginning to uncover the Watergate Scandal. In 1973, Vice President, Spiro Agnew resigned facing charges of tax evasion and the Supreme Court came to a landmark decision in Roe vs. Wade that would resonate into present day. A year later, Nixon resigned in the face of Watergate. A year later in 1975, the United States pulled out of the Vietnam War.

The early 70s also gave us the Arab Oil Embargo, the Environmental Protection Agency (EPA) and the 26th Amendment allowing 18-year-olds the right to vote.

In the later 70s, with the war ended, the nation got back to business as usual. In 1976, Jimmy Carter was elected President, besting incumbent, Gerald Ford in the general election. The year 1979 would add a little more drama to the decade, with the Three Mile Island disaster and the beginning of the Iran Hostage Crisis.

In Flint, the decade was a wild ride. The air was electric and citizens were still living the good life; but in the background, warning signs began to appear. In an attempt to be more economically viable, the city was slowly making changes by consolidating as the tax base and industry continued to flee. Worst yet, General Motors started to lose its iron grip on the automobile industry. For Flint, the 70s was a time of transition.

The music was loud and the world was free. Between 1968 and 1974, thousands flocked to a little farm and amusement park just north of the town of Davison to enjoy some of the nation’s best music and bands. Sherwood Forest, a music festival collaboration between businessman Don Sherwood and legendary Flint deejay, Peter Cavanaugh, was the talk of the state. Their “Wild Wednesday” shows and weekend events at first clashed with local authorities, but a deal was brokered and the shows were allowed to continue much to the delight of young, local rock enthusiasts. Area bands and musicians who rocked Sherwood include: Bob Seger, Ted Nugent, Chuck Berry, MC5, Bo Diddley, Mitch Ryder, Mickey Dolenz, Blue Oyster Cult, REO Speedwagon, Joe Walsh and many, many more.

While the youth of Flint were busy partying at Sherwood, the city was beginning to transition away from the prosperous municipality it once was. Subtle hints for the future were starting to appear. As the 70 millionth GM vehicle, a 1970 Monte Carlo, slowly rolled off of the assembly line and out of Flint, it would be the last Chevy passenger car built in the city. The year 1970 also saw the longest work strike in General Motors history – an epic clash between two of the country’s most powerful organizations at the time – GM and the UAW. The strike was nationwide and would last for 67 days with the union emerging victorious. Flint again led the way during the strike.

The picket lines got all of the coverage, but 1970 would also see Downtown Flint end its run as a shopping destination. In 1969, the Eastland Mall (now Courtland Center) was completed and in 1970, Genesee Valley Mall was built, both poaching Downtown businesses. Soon, Sears and Woolworths left Downtown for Genesee Valley. Throughout the decade, Downtown stores continued to move or close, adding to the ever-increasing exodus from the city. In 1979, Downtown shopping dried up almost completely, when J.C. Penney, The Vogue and Fain’s Furniture Store left. The last two retail giants standing, Ward’s and Smith-Bridgman’s Department Store closed in 1980. 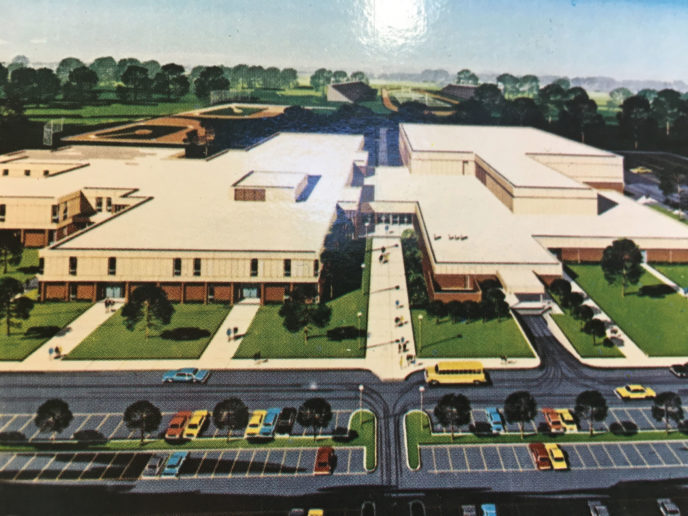 In 1970, the majority of flint’s catholic schools consolidated and Powers High was opened on Carpenter Road.

In early 1970, the majority of Flint’s Catholic schools consolidated and Powers High School opened for the new school year. It was named after Pastor Luke M. Powers, in recognition of his service to the city for nearly 40 years. That same year, Women’s Liberation of Flint was formed to promote feminism. Notable feminists, Grace Atkinson and Gloria Steinem visited Flint in support of the organization.

Civil Rights and feminism advanced in 1971, when Helen Harris became the first black woman on the Flint Board of Education and again in 1973, when Ailene Butler was the first black woman elected to the Flint City Council. Flint Northern High School won the ‘71 and ’72 state basketball championships under coach Bill Frieder, who would move on to coach the University of Michigan from 1980-89.

In one of his last visions for the area, Charles Stewart Mott funded the building of the C. S. Mott dam. It was completed in 1972, essentially creating Mott Lake, which was built upon farmland and wild forest and in preparation, the land went through expansive landscaping.

The year 1973 saw a very solemn affair. Shortly after the Mott Dam was finished, at the age of 97, Charles Stewart Mott passed away, ending a long line of Flint and GM-grown philanthropists. His legacy lives on with the Mott Foundation, Applewood Estate and all that he did for Flint and Genesee County. Shortly after his death, Genesee Community College (formerly Flint Junior College) changed its name to Mott Community College in his honor.

The Arab Oil Embargo of 1973 began to loosen GM’s hold on the auto industry as foreign manufacturers began to gain ground through innovation and quality. (Indeed, new innovations have not come from GM since power steering and automatic transmission in 1949.) GM was also averaging close to $500 million in annual warranty repairs. In a speech given to management, then Regional Vice President, John DeLorean, expressed his dismay saying, “poor quality threatens to destroy us. It has already decreased customer loyalty and reduced the credibility of future promises.” GM refused to change any operation and fell even further behind foreign automobile makers when the company refused to acquiesce to new emission rules in a timely fashion. Due to these errors, smaller cars from Volkswagen and Japan were becoming quite popular, substantially slowing GM profits and helping lay the groundwork for what would soon follow in Flint.

As the first half of the 70s came to an end in Flint, Doyle Elementary School closed due to dwindling enrollment. (The building would re-open in 1981 as Doyle/Ryder Community Education Center.) The trend of consolidation and migration outside the city boundaries had caused its first public casualty. The 70s claimed three more elementary schools in the city: Oak, Clark and Parkland. More closings would be inevitable.

The polling stations opened and for the first time, Flint citizens rushed in to vote for City Mayor. Earlier, the Mayor had been chosen by the City Council, but all that changed with the election of 1975, according to the new City Charter. The race was very close, pitting former mayor and city councilman, Floyd McCree, against former police chief, James W. Rutherford. After the votes were counted, James W. Rutherford became Flint’s first mayor to be elected by popular vote, beating McCree by a mere 205 votes. Rutherford immediately laid plans for future development in the city that would play out in the next decade.

In the later part of the decade, politics was the headline in Flint. In 1976, the Federal Government ruled Flint schools to be segregated and ordered the city to de-segregate. This led to the creation of “magnet” schools – those that offer special instruction and programs designed to attract a more diverse student body. The magnet school system was deemed an acceptable answer, even though the fundamental problem was never really addressed.

The city also had its share of political visitors. In May of ’76, incumbent President Gerald Ford visited during his Whistle-Stop Tour during his re-election campaign, giving a speech at the University of Michigan-Flint. Ronald Reagan was the next to visit the city and George Wallace would also make a visit in his attempt to gain the Democratic nomination. Jimmy Carter and his running mate, Walter Mondale, spent the most time in Flint. Carter visited five times and spent Election Eve giving his final speech at the IMA Auditorium. He went on to win the election of ‘76. 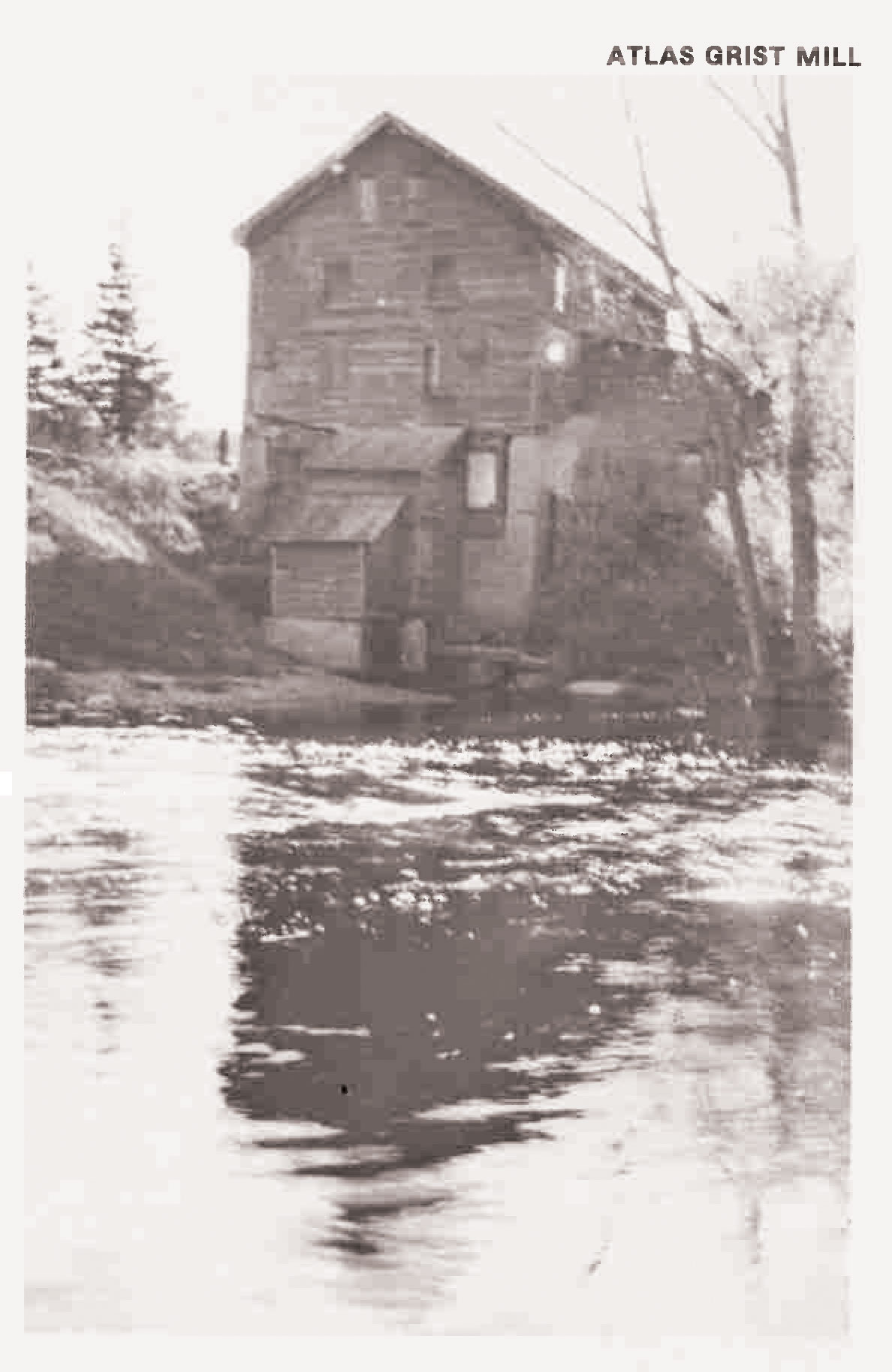 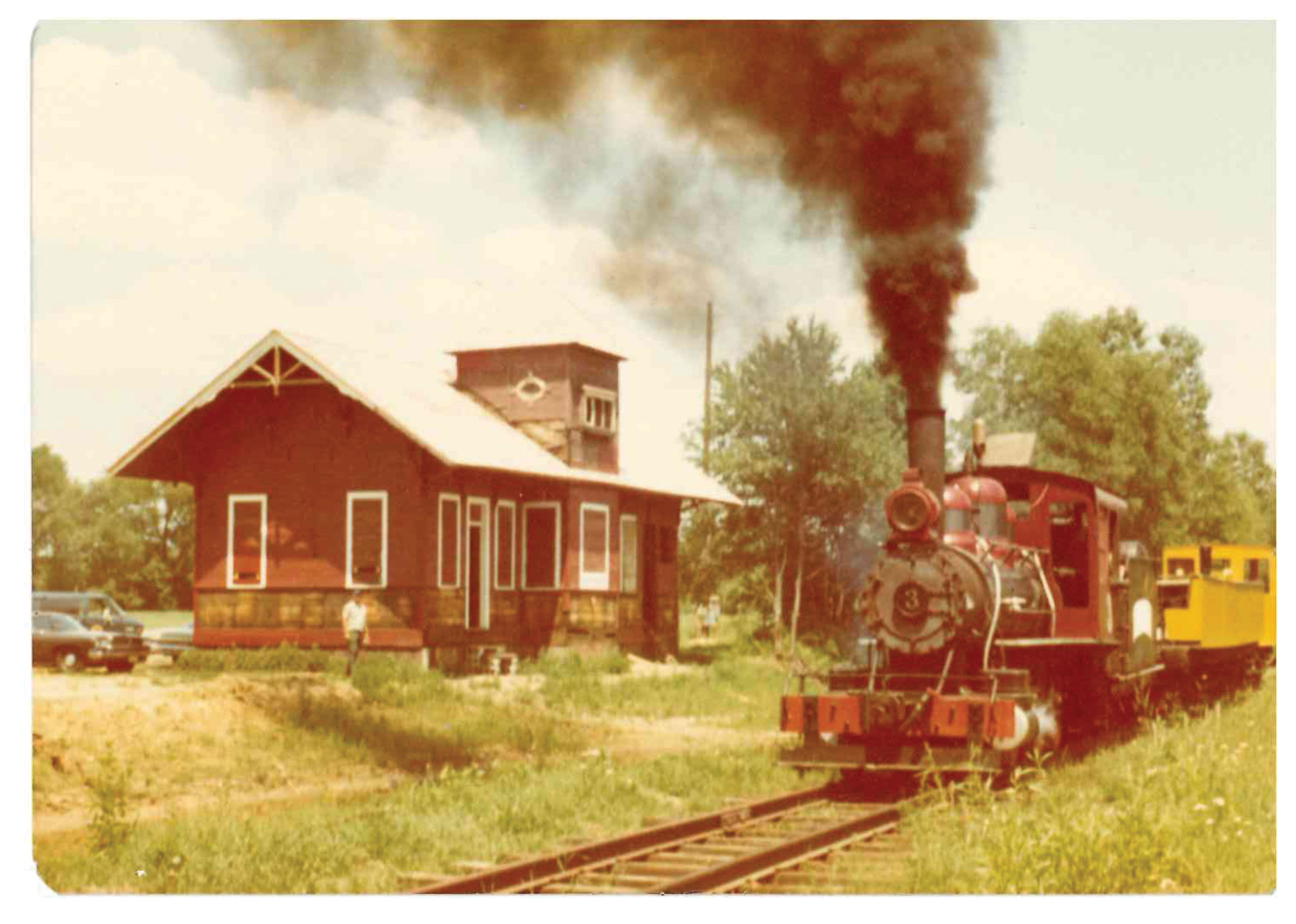 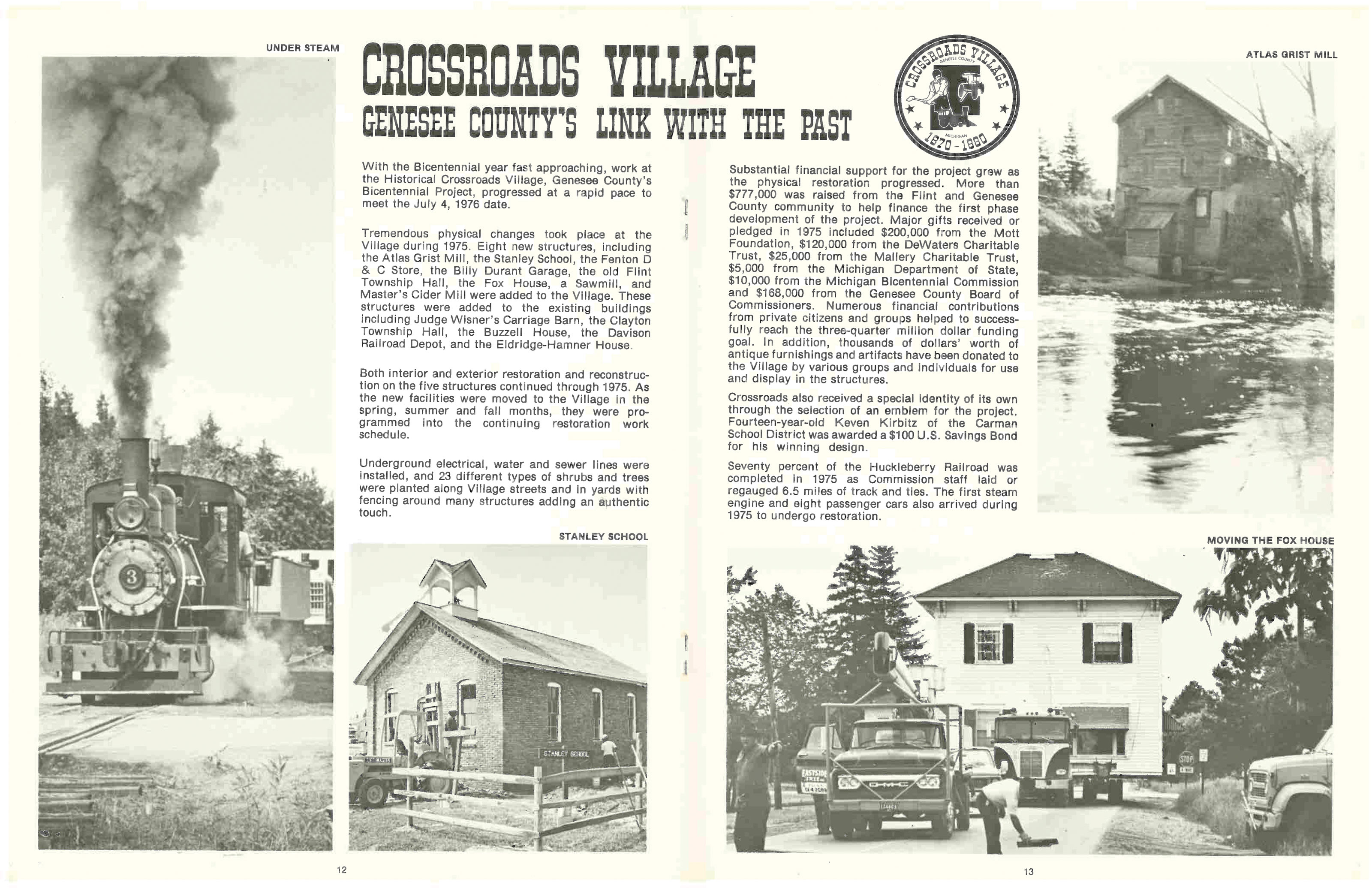 Crossroads village was completed in 1976. The idea of John West and Stanley Mahaffy, it was created to preserve city historic buildings and crafts. Along with construction of the village, the Huckleberry Railroad began operation on part of the old Flint river railroad line. The village is a source of pride for Genesee county today.

In the late 60s, it was noticed that historic buildings were rapidly being moved in the name of progress or becoming dilapidated due to neglect. In order to preserve these buildings and the crafts they represented, the idea of a farm museum was brought up by John West and Stanley Mahaffy. The idea quickly merged into the idea to create an entire historic village. With the city’s bicentennial approaching, Crossroads Village was put on the fast track. On farmland granted by the Mott Foundation, the Village was completed in 1976. Along with Crossroads, the Huckleberry Railroad began operation on part of the old Flint River Railroad line. It was so named because it traveled so slowly, a passenger could jump off the train, pick a huckleberry and easily re-board. Stepping Stone Falls was finished in the summer of 1976, named by Miss Debbie Holbrook who submitted the winning entry in a contest. C. S. Mott never got to see the falls or the rest of his dream for the Mott Lake area which was to include a golf course, zoo, soapbox derby hill, equestrian arena and fine arts center. After Stepping Stone, interest in the area’s further development quickly dissipated.

In 1977, the Downtown UM-Flint buildings opened and began holding classes. Not far from the UM-Flint buildings, a new road race would be held for the first time. The 10-mile race was created by Michigan Speaker of the House, Bobby Crim, to raise money for the Special Olympics. The first race raised more than 30,000 dollars and was such a hit that in two years, 34,000 runners would fill the streets of Flint. The Crim Festival of Races is now the premier event held Downtown. In 1979, former President Gerald Ford revisited Flint to teach a few classes in the new buildings. With Ford lecturing in town, Flint’s first black-owned radio station was founded by Vernon Merritt, WDZZ. It featured a mixture of disco, jazz and urban contemporary and was an immediate hit with area residents. Flint Northern High School found its greatest success athletically when the Northern High girls basketball team won 75 straight games from 1978-81, winning four straight state titles under coach Dorothy Kulkulka. It was a feat that has never been matched to current day. The boys also had their share of grandeur when the Northern Boys Track and Field team won three straight state championships from 1979-81.

The ‘70s were indeed the last decade in which prosperity still held a small amount of momentum. In reality, the city was coasting on fumes. The death of C.S. Mott seemed to signal the end of the old way of life. The city had thrived for so long that no one ever thought it would end. The warning of the early ‘60s, given by both John F. Kennedy and the 1960 Master Plan would soon play out and the next decade would hit the city harder than anything before.