By 1916, Flint was in the middle of an automobile manufacturing frenzy. Buick was already in operation and AC Spark Plug was off and running. Streets were crowded with Monroe, Paterson and Dalton cars. General Motors, started in 1908, was just beginning to rev the engine. All of this hustle and bustle was attracting thousands of immigrants to the city with hope of forging a better life. Irish, Jewish, Polish, Spanish, Italians, Ukrainians and others brought their families to Flint. Another group, the Scots, joined them. 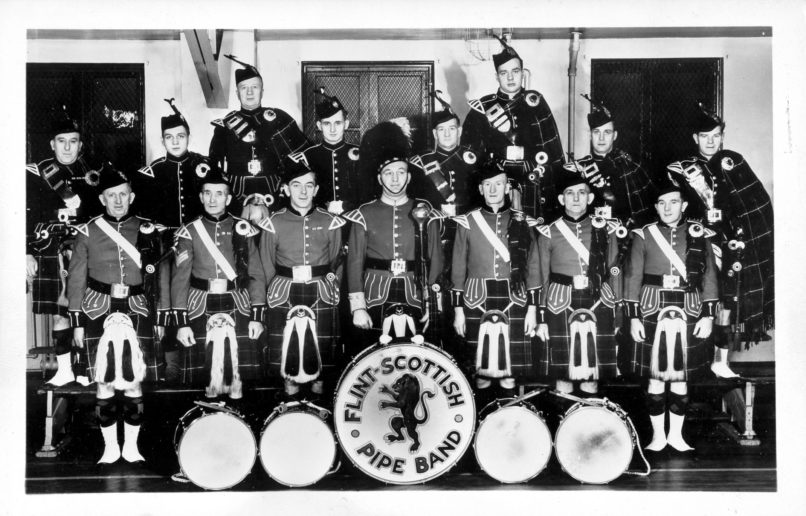 As immigrants settled in Flint, they naturally sought out those of their own culture to reminisce and enjoy the pastimes of their homelands. For the Scottish, a social organization called the Clan MacKenzie was established for such a purpose – to help new Scottish immigrants adjust to their new way of life and to serve as a safety net for those who fell on hard times. The social group met monthly and some of the members who knew how to play brought their bagpipes. Soon, the sounds of the Highlands filled the meetings and the Flint Scottish Pipe Band was formed, sponsored by the Clan MacKenzie. The Flint Scottish Pipe Band (FSPB) adopted the MacKenzie tartan in response to sponsorship and continues to do so to this day. (The tartan is a woolen cloth worn in one of several patterns of plaid in a design associated with a particular Scottish clan.) “The Clan MacKenzie told the original band members that they were going to produce kilts for them, burnished with the MacKenzie tartan,” says current FSPB director, George Murray. “As the band continued to grow and change, the MacKenzie kilt continued. We have worn it now for 104 years.” 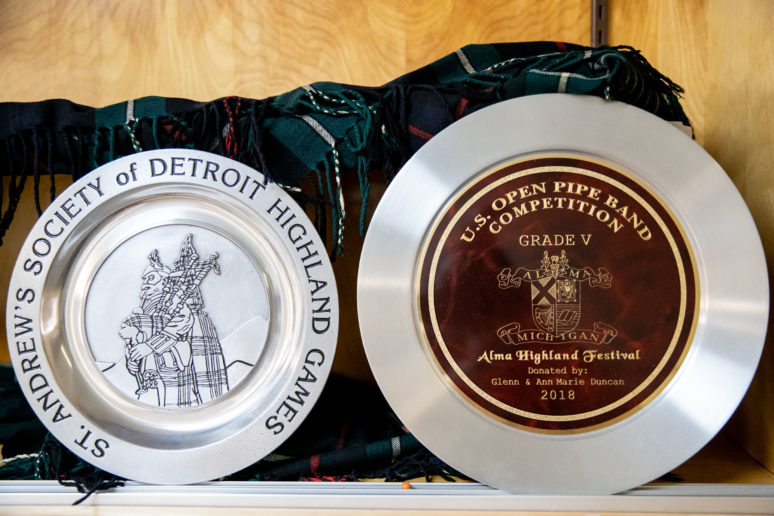 The FSPB is Michigan’s oldest pipe band and the 11th oldest in the nation. They participate in parades and festivals throughout the state, such as the Munger Potato Festival, Montrose Blueberry Festival, Caro Pumpkin Festival, the Linden Frosty Parade and others. Each year, the FSPB makes a much-anticipated appearance at the Michigan Renaissance Festival during the Highland Fling weekend. Despite their busy schedule, the band still finds time to compete against other pipe bands across the United States and Canada. “We are a competition band,” informs G. Murray. “We are the 2018 U.S. Open Champions in Grade 5 and from 2007-09, we were U.S. and Canadian Champions.” George’s brother and longtime member, Bill Murray adds, “Over the decades, we have done well and competed absolutely everywhere.” The band has played with Holiday Pops and The Chieftains at The Whiting, and recently with famed violinist Andre Rieu at the Fox Theatre in Detroit. “He was coming to the U. S. on tour and got in touch with us,” informs B. Murray. “He asked for 30 pipers, so we got the band together and had to call in all the best pipers we knew from around the state. It was a great evening and an awesome experience.”

The FSPB’s success and longevity can be attributed to the strong ties of its members and their dedication. The members include multiple generations of family, with the old imparting the new with the skills needed for the band to continue. For the Murray brothers, it was no different. At a young age, George and Bill were introduced to the bagpipes and the FSPB by their father, William. “Our father was born in Glasgow and was part of the Clan MacKenzie,” says Bill, whose granddaughters are now part of the organization. “He joined the band to socialize and ended up becoming drum major. He had six sons – five of us became pipers and the youngest was a Highland dancer.” “It was terrible. We tortured our mother for years with those pipes,” George laughingly remembers. 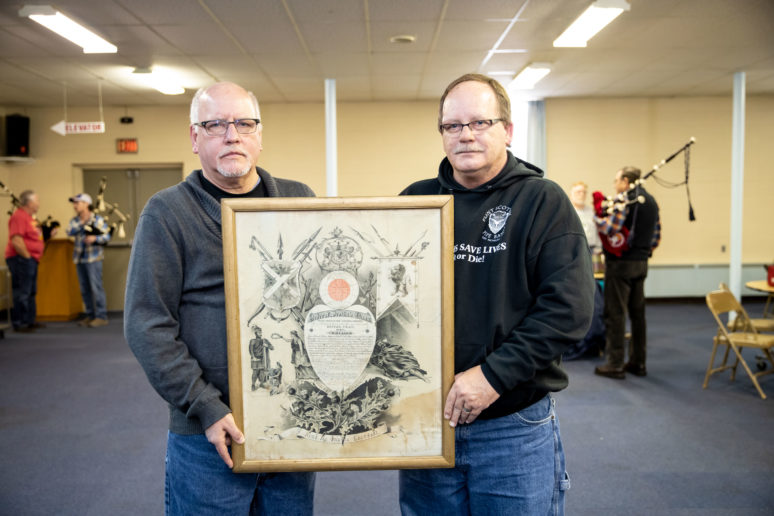 Taught by original FSPB member, Charlie Thompson, the Murrays have been playing for over 50 years. The current band consists of 14 active pipers, three drum majors, two bass drummers, six tenor drummers and six snare drummers. The band’s youngest members often fill the ranks of the color guard and/or the Highland Dancers. The band is always looking for new members and current members are willing to teach interested beginners, both men and women. Bagpipe lessons are taught on Sundays and beginners do not have to purchase a full set of bagpipes to start. All training is done on a training chanter. Those interested are invited to contact George Murray at pipesrus@comcast.net. 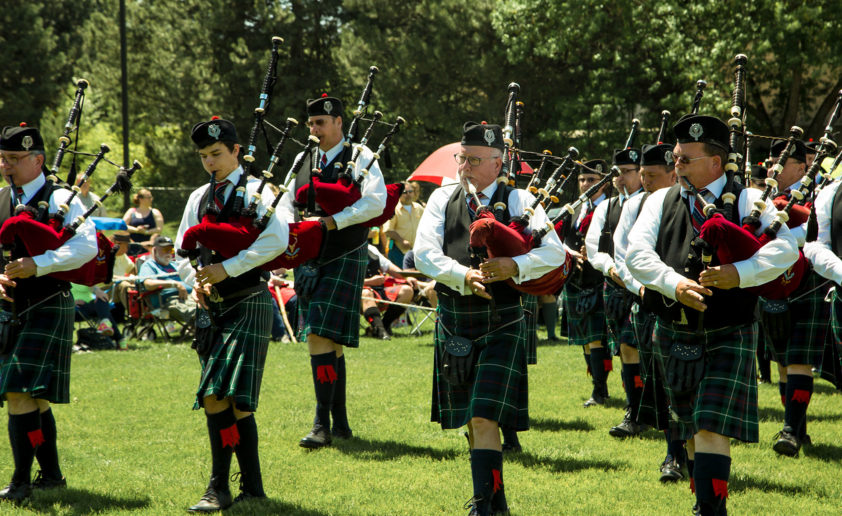 In February, the band spends most of its time getting ready for their raucous Ceilidh (Kay-lee) winter celebration. “The Gaelic translation is ‘to gather’ but basically it’s just a big party with music, food, drink and dance,” states Bill. “It’s an opportunity to meet with friends and enjoy some Scottish fare.” This Ceilidh is open to the public (with ticket purchase) and this year will feature four pipe bands; Roane, a Celtic-American folk band; Highland and Irish dancers, Scottish and Irish Vendors, and Scottish foods including bridies (meat pies), haggis and scotch eggs. The night before the Ceilidh celebration, Bill Murray hosts a single malt Scotch-tasting that features history of the drink, dinner, Celtic music and a souvenir glass. 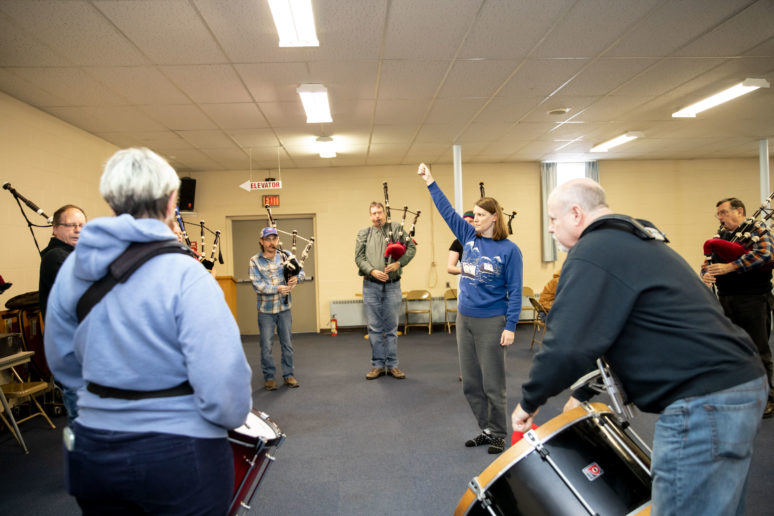 The Flint Scottish Pipe Band has a history steeped in tradition and friendship. They are a dedicated and talented bunch who wear their heritage proudly. “As a member of this band, I always had a place to go and buddies for life,” George states. “We want to keep the Scottish heritage alive and we are looking for the next generation. Our current goal is to build up the young kids to the point where they are capable of continuing the band when the elders are gone.”

The Ceilidh celebration will take place on February 22 at the Davison Knights of Columbus Hall. Tickets are available at flintscottish.com. Get tickets early as the event sells out!

The single malt Scotch tasting hosted by Bill Murray will take place on February 21 at the Davison Knights of Columbus Hall. 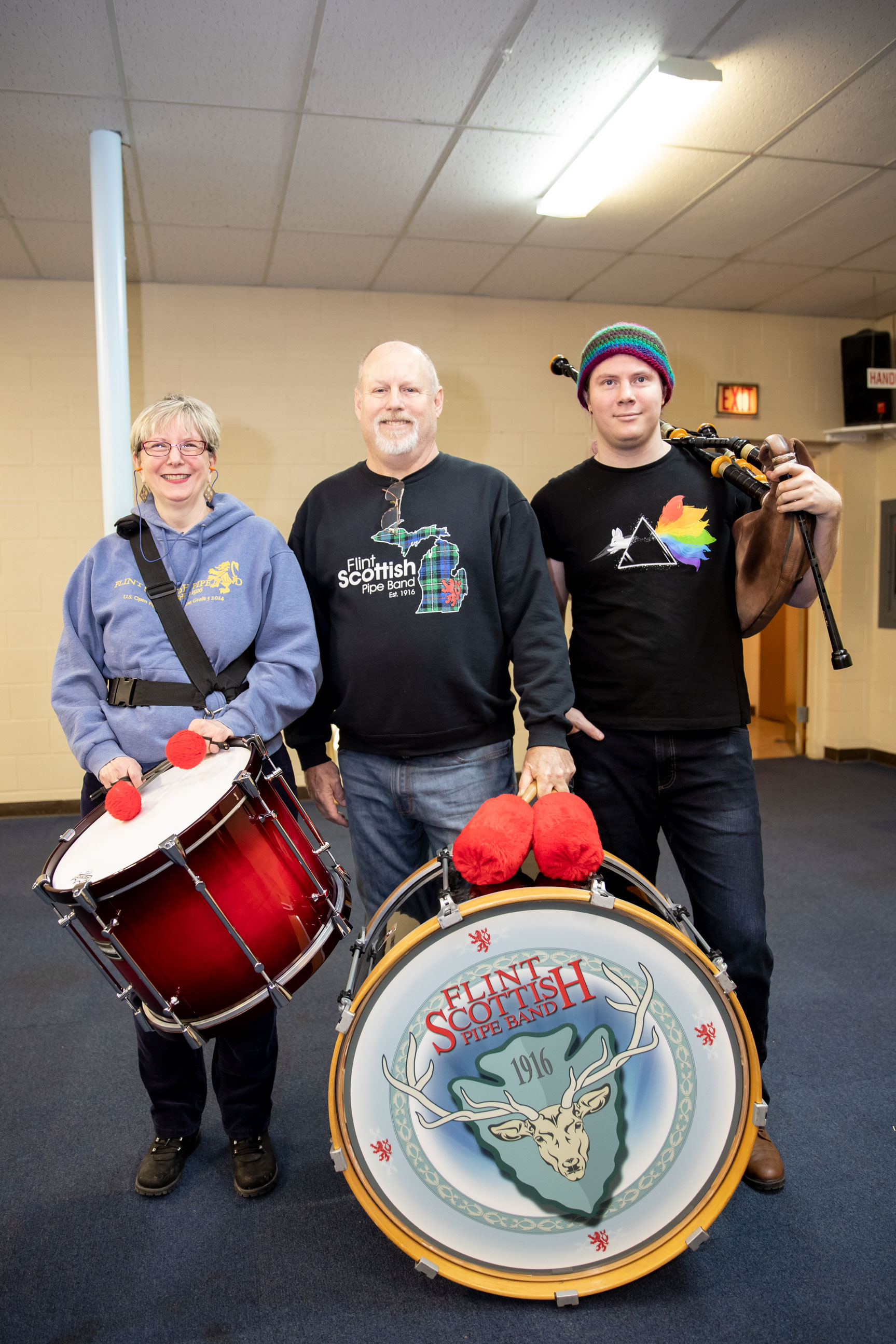 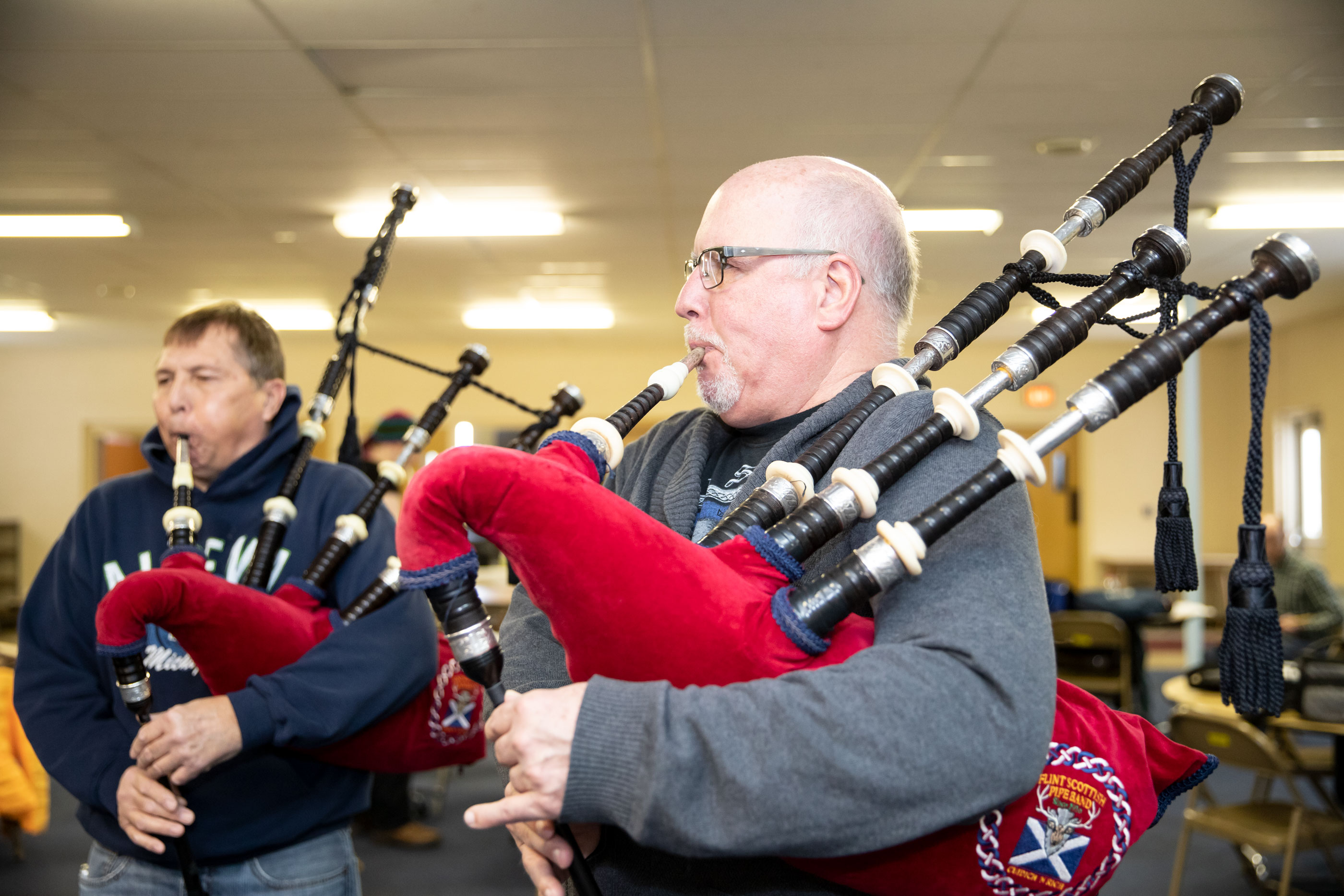 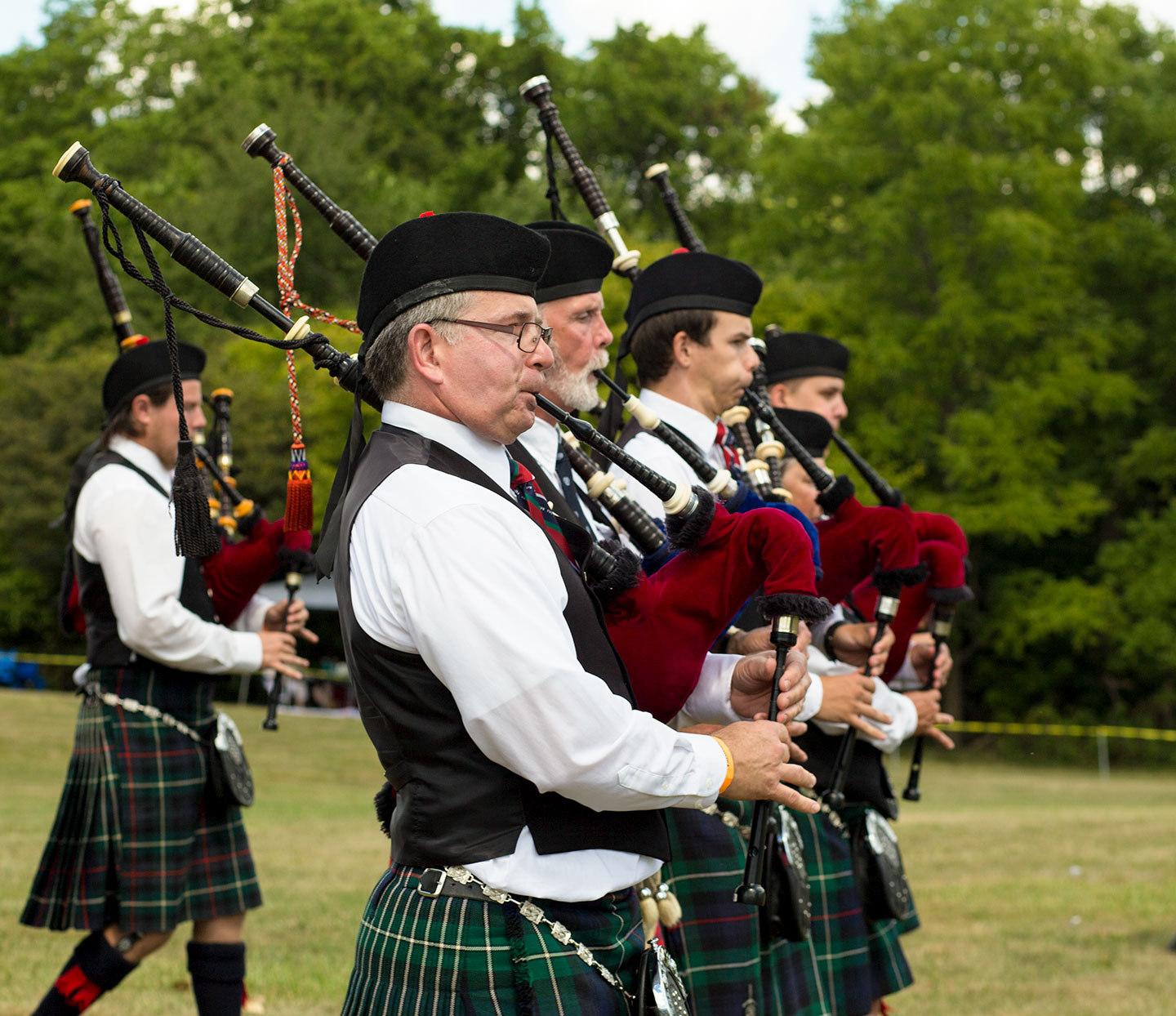 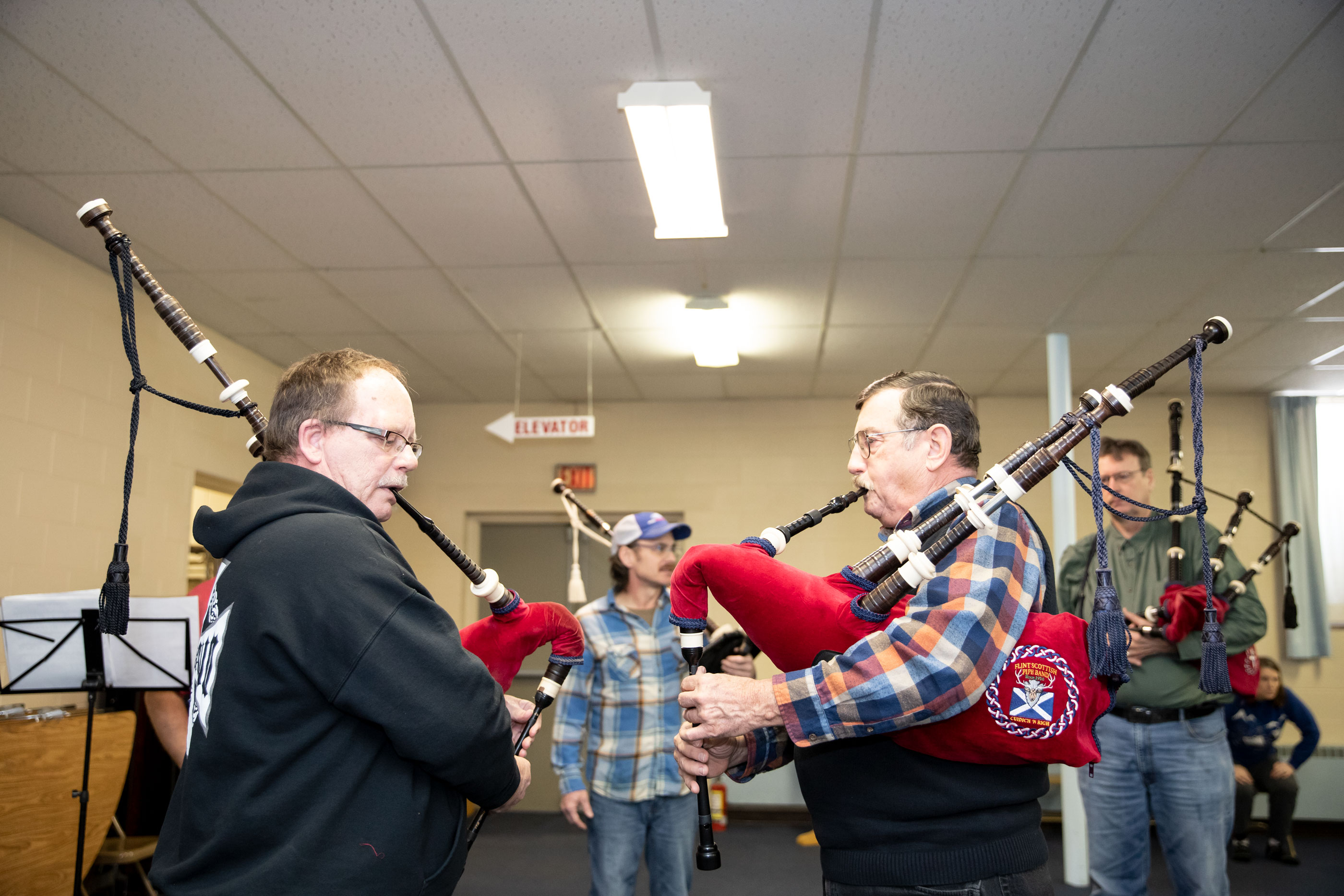