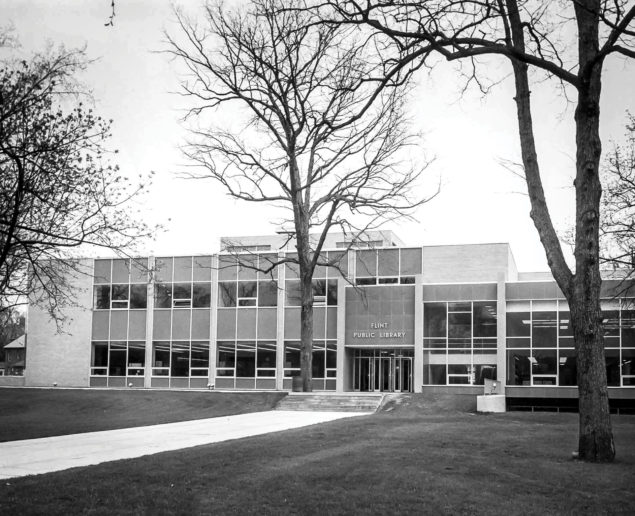 MY City Magazine recently sat down with Kay Schwartz, Director of Library Services at the Flint Public Library, to talk about the exciting $27.6 million project to completely renovate the Library. According to Schwartz, the project is proposed to begin in 2020 and the renovation would enhance the facility’s educational opportunities and community spaces for the public. Plans for the project have been in the works since 2016.

The building, which celebrated its 60th anniversary in 2018, is definitely in need of an update. A library specialist was hired in 2016 to do a facility assessment. “Every single aspect of the library building was at or near end of life,” says Schwartz. In 2017, OPN Architects of Cedar Rapids, IA worked to develop the design which was adopted by the FPL board. A grant was also sought and $1.2 million was awarded by the Charles Stewart Mott Foundation. 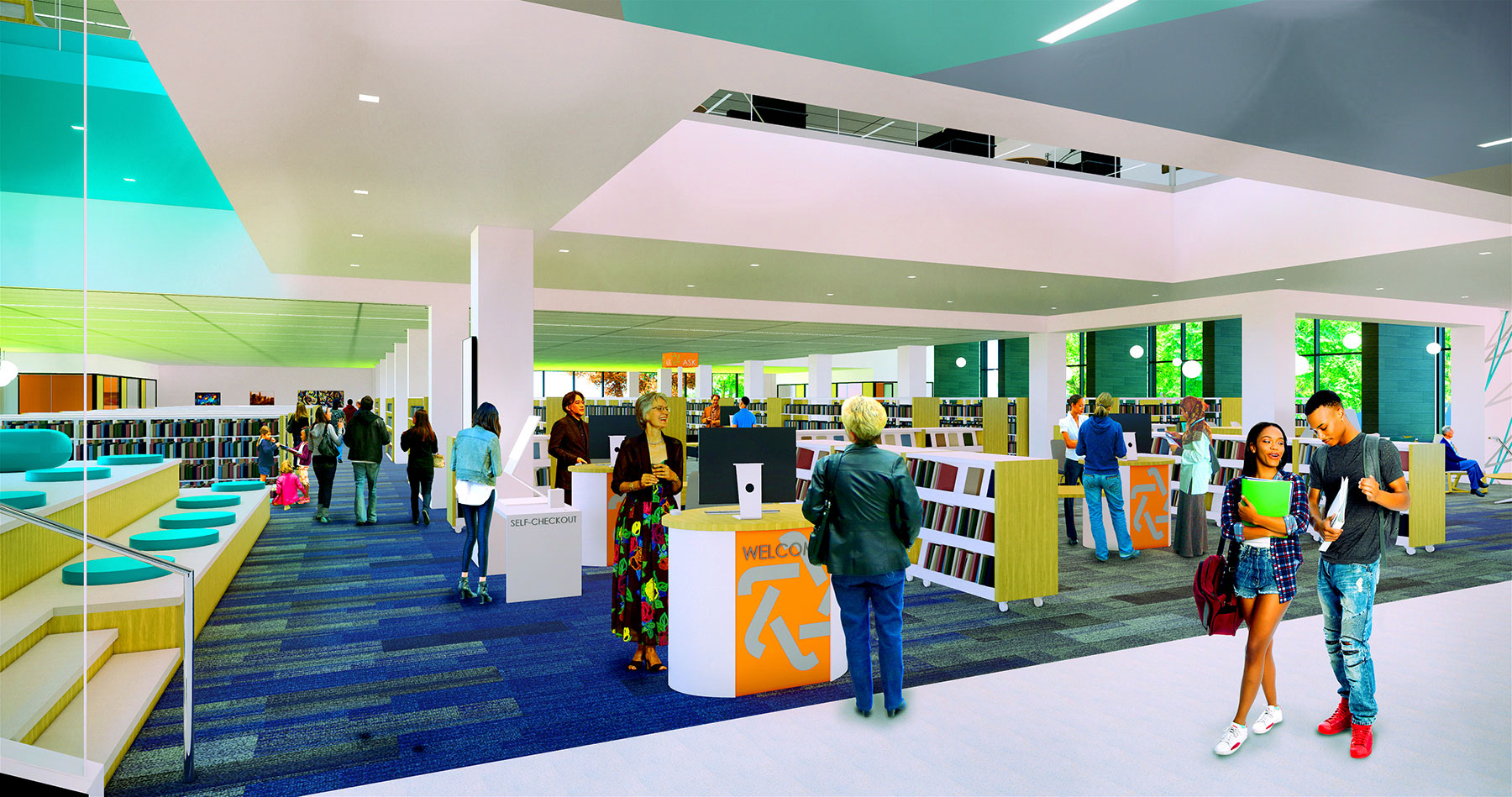 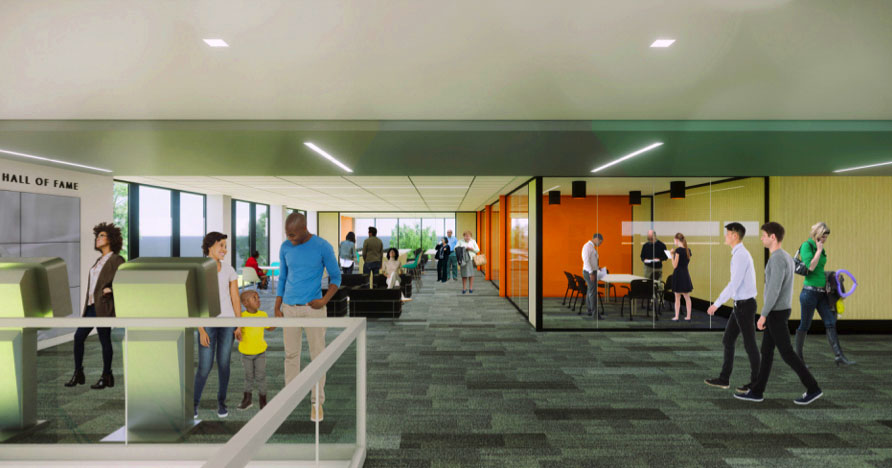 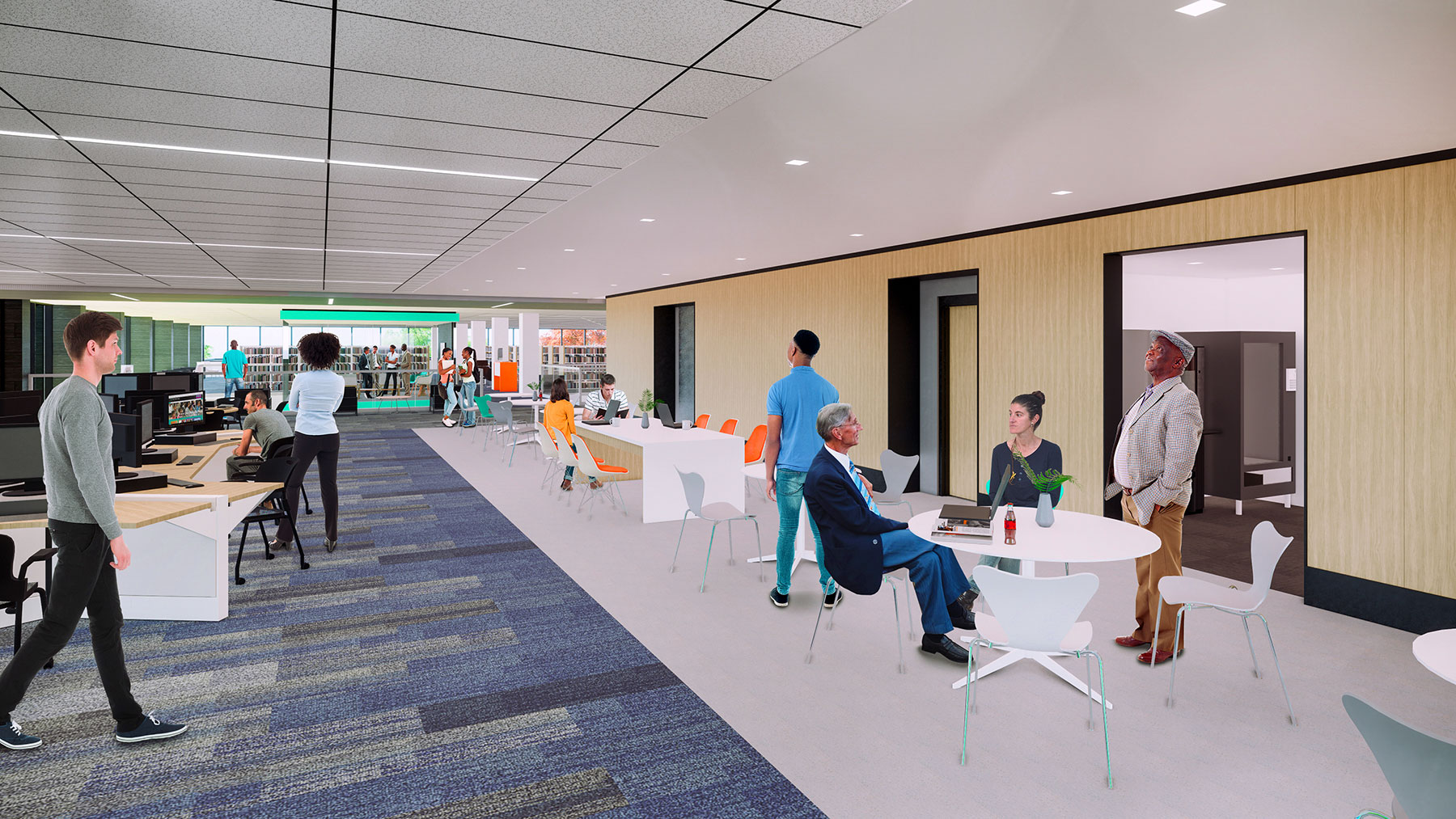 Internet Cafe
According to Schwartz, some very generous donors are prepared to provide more than half of the funding needed for the renovation. This will reduce the amount that taxpayers will contribute through a bond. The Library will seek the additional $12.6 million needed to complete the project through a bond proposal on the November 5 City of Flint ballot. Schwartz says the board has approved setting the maturity date of the bond for 12 years to keep the interest rate as low as possible. “November 5 is a big day for this project,” she adds. “The city voters have been very supportive of our operating budget requests.”
So far, people are very excited about the renovation project. “We have had a lot of positive input, so far,” says the director. “Everyone who has seen the design felt it was good for the community.” Schwartz points out that many people don’t know that the Flint Public Library is the only building on the Cultural Center Campus that is completely owned by the people of Flint. “The Flint citizens, they own it,” Schwartz notes. “It’s their spot in the Cultural Center.” However, the Library doesn’t receive any money from the Arts & Culture Millage. “We are a separate entity from the Cultural Center.”

“Flint Public Library is a community center with learning and information at its core. The [C.C. Mott] Foundation has made an initial grant of $1.2 million to support the renovation effort. This project would create the kind of space and technology the community needs to meet modern-day demands.”
Ridgeway White, President/CEO Charles Stewart Mott Foundation

If voters approve the bond initiative, the entire interior of the Library will be renovated. Significant changes include: doubling the children’s learning space and the digital learning space. The renovated facility also would have 66 percent more space for local history and genealogy, 15 meeting rooms and four classrooms. An additional 16,000 square feet of space would be available to the public, and the building would be more accessible for people with limited mobility.
Once funding is secured, the project will begin in earnest. The Library will be moved to a temporary location during the construction but a location has yet to be determined. “We would be closed for approximately two months in early 2020 to pack up and move,” Schwartz reports. “Similarly, we will close for roughly the same amount of time to move back into the renovated facility in the early summer of 2021.” Information about the closings and temporary location will be posted as far in advance as possible. The temporary space will not be as large, but will have computers, internet service and lots of children’s books and best-sellers, says Schwartz, adding that they hope to stay in the city. While closed, the Library’s website will still offer downloads and a portal to other services. 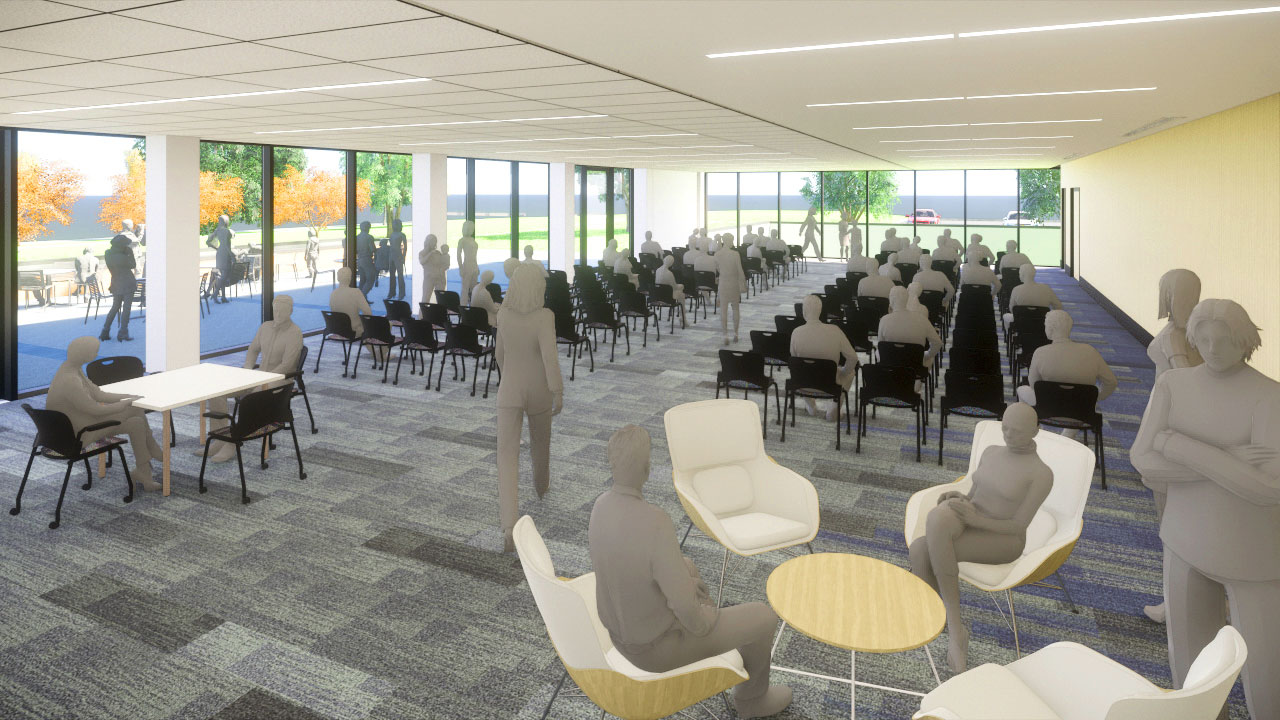 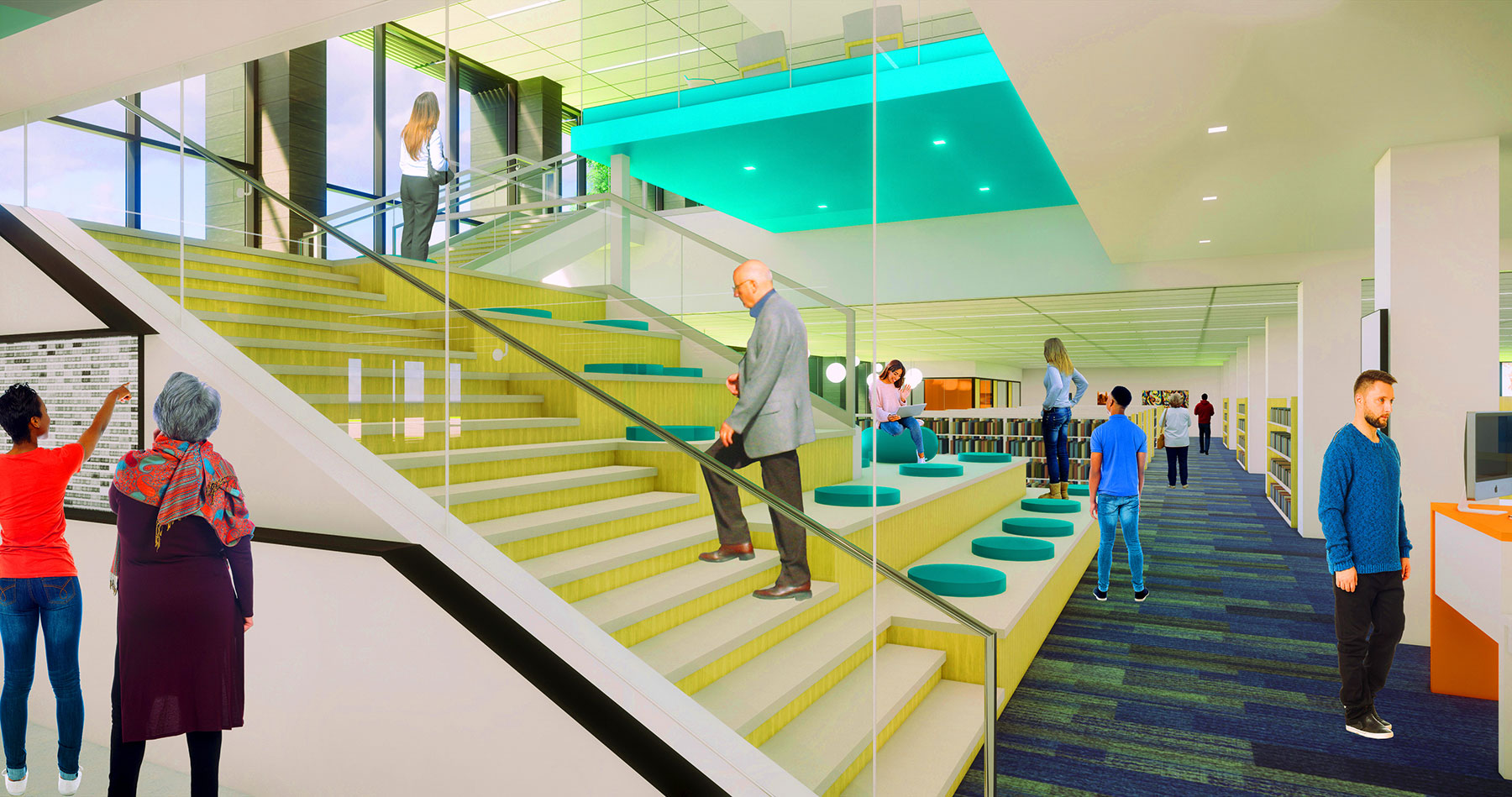 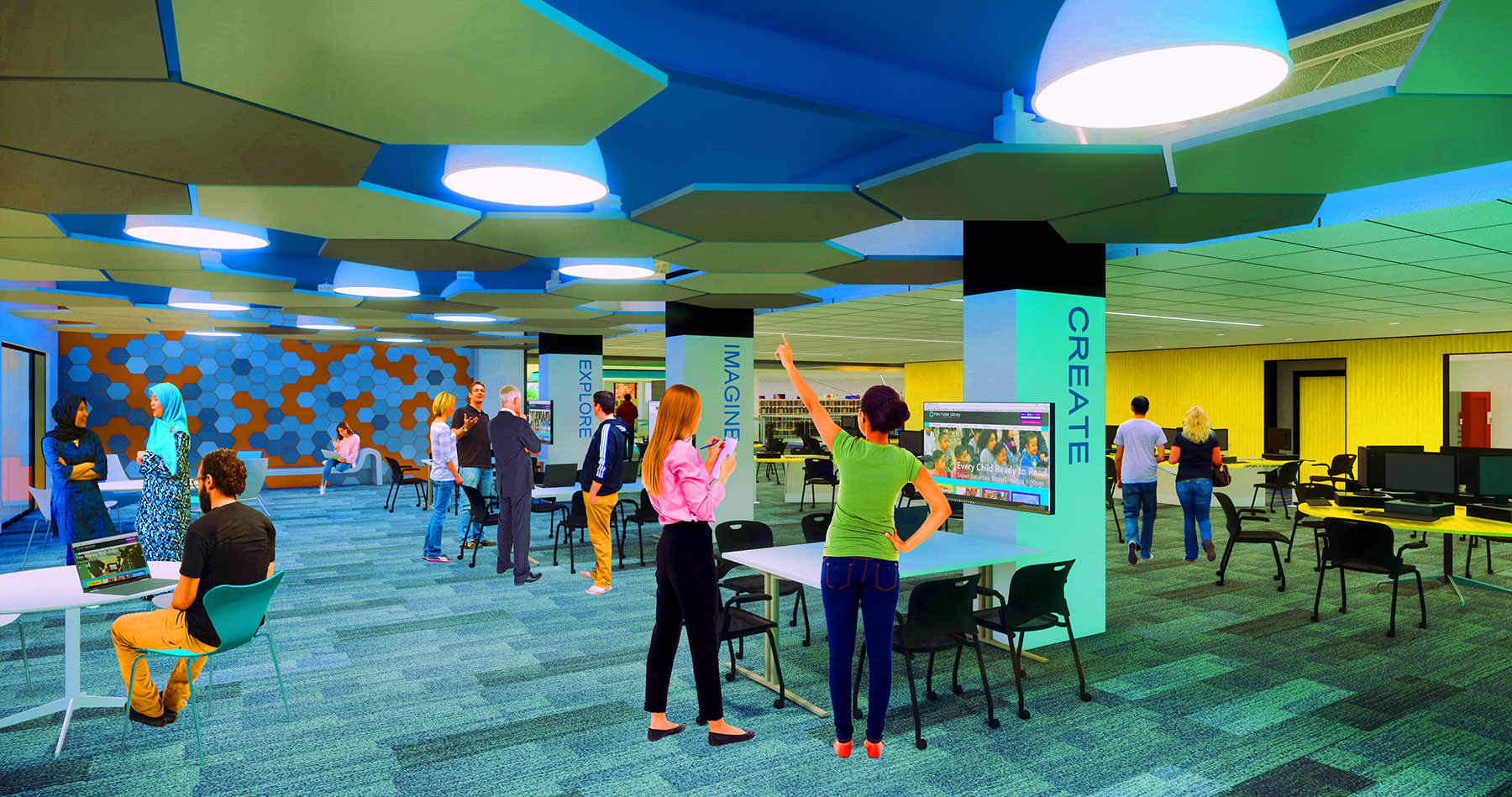 Digital learning hub
“Our building and its systems are 60 years old,” says the library director. “Major renovations are needed to keep it working. Our board has adopted a renovation plan that is more cost-effective than constructing a new building. We are very excited about what this means for the people of Flint.”
For more information, visit YourNewFPL.org.

About the Ballot Proposal

The Flint Public Library is placing two measures on the November 5 City of Flint Ballot. You will need to vote separately on each ballot measure.
The first measure is the renewal of a 2-mill operating millage that provides funds to maintain the Library’s current programs and services. The second measure is a 12-year bond to help pay for the building renovation.

OPN Architects will preview the new Library design with the public prior to the November 5 vote: 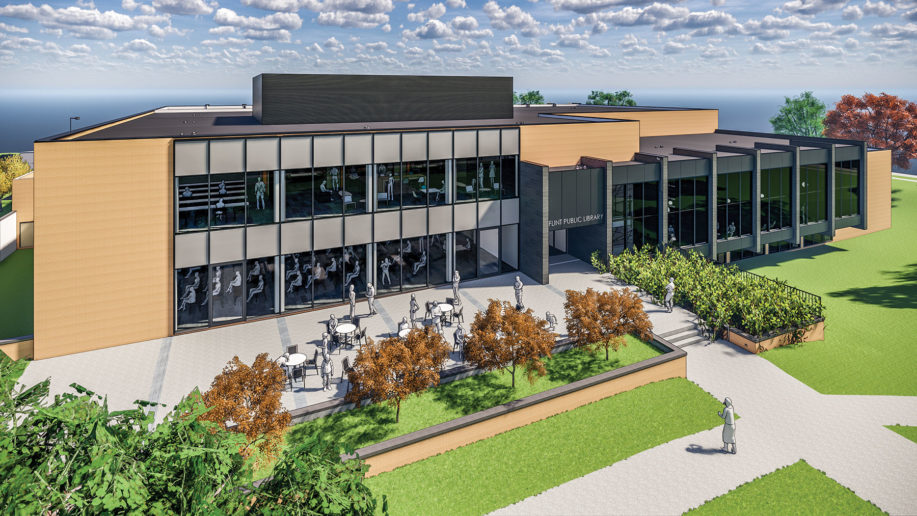