The City of Flint Police Department is proud of two newly-inducted officers who share the same April 29 police academy graduation date and insignia on their uniforms – but, even more coincidental, they share the same last name: Reed. Officers Maria and Dion Reed are making Flint history as the first mother-son duo to join the department.

“In all of my years on the police force,
I’ve never worked with a mother and son.”
–John Boismer, Flint Police Sergeant 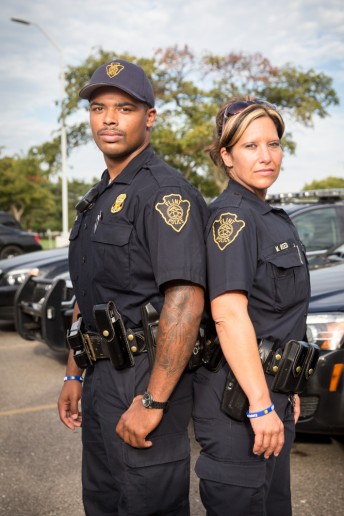 “This is truly a unique experience,” says Sergeant John Boismer, the field training officer who supervises the new pair of officers. “In all of my years on the police force, I’ve never worked with a mother and son. It is enjoyable. Individually, they both have exceptional dedication and commitment to the job.”

For Dion, 21, hard work and dedication are nothing new; obstacles have not deterred this young Flint native. “I was told by some people who didn’t want me to become a police officer that I was too short, too small, and too young,” he says. The former four-year varsity football running back from Bendle High School who once scored two touchdowns in a 41-0 victory against Genesee, is no stranger to training, discipline and exercise.

“As a teenager, I had friends who were joining gangs, getting in trouble with the law, drugs, fighting and drama,” says Dion, who returned to Flint to pursue his childhood dream of a career in law enforcement after playing football for a short time at Adrian College. “I had chosen to stop hanging out with those kinds of people and put my energy into sports.” Now his energy goes into patrolling the streets of Flint and responding to reports of shootings, stabbings, home invasions, burglaries and domestic disputes. “I love what I’m doing,” he says.

For Maria, 39, the choice to become a police officer stemmed from enduring some tough life experiences. “I was a young, 185-pound single mother raising three kids – Dion, Corey and Nevaeh – without a father. I worked as a dialysis technician and later in the EMS field for 11 years. I racked up student loans, and honestly, it wasn’t until I experienced the trauma of being stalked and having a gun put to my head that I knew something needed to change.” 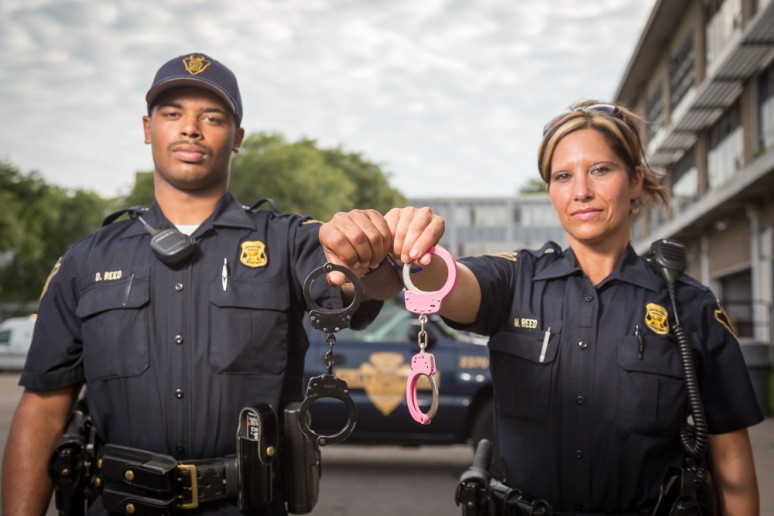 Her fear of guns paralyzed her for a short time. “I knew I needed to overcome this fear, so I found a firearms instructor to help me,” Maria shares. Step-by-step, she learned to assemble and disassemble a weapon and simply by holding it and understanding it, she let go of her anxiety about guns.

Another turning point came when Maria saw an advertisement recruiting to hire City of Flint police officers. “I knew I wanted this,” she says. “Dion was at a point where he was ready for it and I wondered if they’d take both of us.” The department was receptive to gaining both the Reeds.

“I was excited, but stressed,” says Maria. “I knew I had weight to lose and I needed to prepare for the Michigan Commission on Law Enforcement Standards tests. But I was determined.”

Dion was used to weight-training and working out, but he stepped up his game to prepare for the Academy. He helped motivate his mother. Maria began a regimented  exercise, diet and running routine. The pair ran together and timed each other. “He always lapped me,” laughs Maria. She went from 185 pounds to her current 130 pounds. It all paid off – both candidates passed their physical agility tests along with the reading, writing and oral exams. 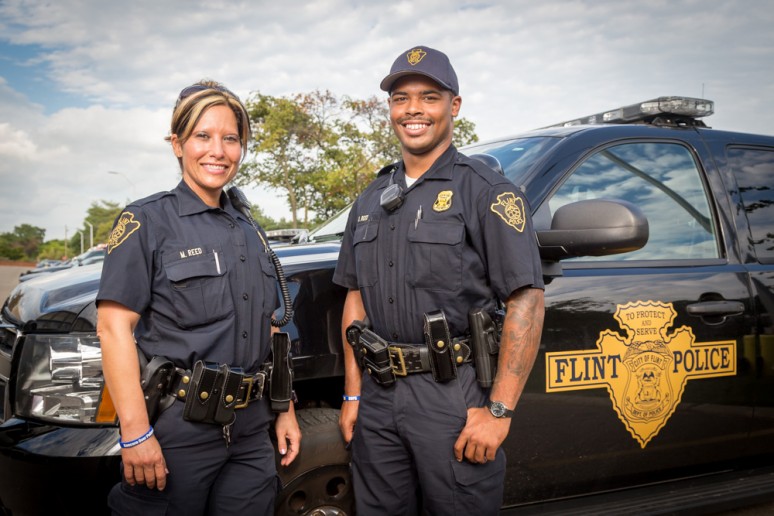 Naturally, as a mother, she worries – but knows that Dion is well-prepared and trained to handle situations with professionalism. “He’s his own person and I’m my own person,” she says. “He’s been an easy son to raise and I’ve never had issues with him. I’m proud of him for pursuing his dream. Of course I worry; but we’re both equipped with our guns and gear and we’re trained.”

One piece of Maria’s gear differs slightly from Dion’s. “I’m a girly-girl at heart,” she smiles. “I love my pink handcuffs. I haven’t had a chance to break them in yet, though.”

Dion looks up to his mother with admiration. “She hasn’t had it easy being a single mom and all, but she’s got a sassiness about her that lets me know she can handle herself.” He says his mother also has a tremendous gift when it comes to helping diffuse hostile situations. Maria agrees. Conflict resolution is a big part of the job.

“We’re not just police officers out there, we’re social workers in a sense,” she says. “A lot of this job involves listening skills. I’ve noticed that when I listen and let people vent their problems without interruption, they’re more likely to calm down.”

One recent incident involved a 17-year-old girl armed with a knife. The girl refused to talk to the County Sheriff’s personnel on the scene. Maria instinctively reacted. “I introduced myself to her and used my first name,” she recalls. “I asked her calmly what was going on. It took a while, but she eventually opened up about how she has no parents, her aunt abandoned her, nobody loved her, she didn’t trust anyone and wanted to hurt herself.”

In the short amount of time the two have been serving and protecting the streets of Flint, both Maria and Dion have encountered something unexpected with the public. “We’re actually thanked for doing our job,” she says. “I find people quite appreciative.” Dion encounters residents who show gratitude for the police and he believes others should know this. “They’re not all haters out there,” he says. “People have actually walked up to me and said they’re praying for the police. Society is not all that bad. People are grateful when we respond to their calls.”

Maria’s mother, Sunday Reed, is especially grateful that her daughter and grandson are making a difference.

“After they were sworn in, my brother brought me a Thin Blue Line flag,” says Sunday, who is proud to be a member of the Thin Blue Line family and flies the American flag next to her Thin Blue Line flag. “I didn’t really know the meaning of it, so I researched it. The top half of the flag represents all the people, the public – us. The bottom, black portion of the flag represents the criminals. The thin blue line in the middle represents the police who protect the people from the criminals. I’m supportive of Maria and Dion and how they are out there enforcing the law and protecting the people. There are good things happening in Flint, and two of them are my daughter and grandson serving the City of Flint as police officers.”