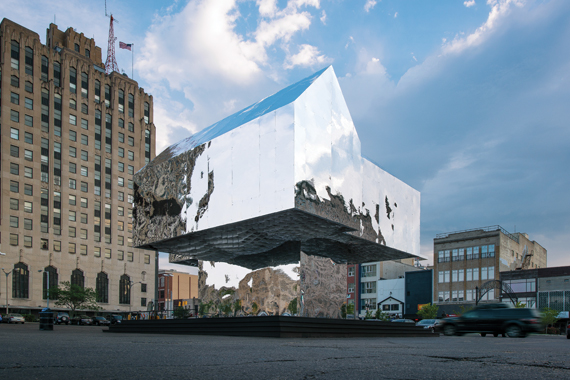 In August, our readers were challenged to consider whether or not they regarded themselves as “lovely” after one of Flint’s own was quoted as saying, “There are some lovely people here.” Again this month, our readers shall be challenged after this article to reconsider how we as residents view ourselves.

“Mark’s House” is the title of the temporary pavilion erected in the Downtown Flat Lot. The long and short of it is that a contest to provide a summer pavilion on the parking lot drew international attention. Over 200 proposals for design were submitted from visionaries in nearly three dozen nations. The challenge presented to the potential architects was to design a concept that could be built within the $25,000 allotted budget. The winners were Cesc Massanas, Tomas Selva and William Villalobos of the London design studio, Two Islands. Architect Cesc Massanas of the Catalonia region in Spain was the only architect among the winning trio in town to witness the pavilion’s completion. Each of the three members of the Two Islands studio came to Flint at separate times in order to keep travel expenses low and still oversee every stage of the project through to its completion. Constant digital communication was a must for this crew – God bless the smartphone.

What follows are the accounts of two men involved in the Flat Lot Project who hold glowing opinions of their time in Flint.

Massanas studied architecture in Barcelona, and was set to begin an internship in New York when the economic downturn forced him to set his sights on the UK, a move that eventually lead him to Two Islands. Massanas is an international sophisticate. His mother is Dutch, so he speaks Dutch, as well as Catalonian, Spanish and English fluently. This was his first visit to Flint, news that his grandfather, who watches the automobile industry very closely, was excited to hear. From Cesc’s perspective, Flint is very much an international city. A few days before the project’s completion, Massanas related to My City all the things he likes about Flint in comparison to the many other places he has visited in the world.

“The people of Flint make you feel comfortable. Everybody’s trying to make you feel at home. Everyone has a ‘Good morning’ for you; they always ask, ‘Can I help you?’ and, ‘How are you doing?’ You don’t get that in many other places. There is no ‘Good Morning’ or ‘How are you?’ in New York. My stay has been great. Yeah, some of Flint’s surroundings can give you a negative impression, but the people themselves make you feel welcome. My colleagues, William and Tomas, told me after their visits, ‘You’re going to love Flint. You’re really going to like it.’”

Scott Hook of San Diego, CA was brought on as Project Manager through a series of university connections to the London architectural firm. About a week before the month-long construction had finished, My City had audience with Hook. He explained his role in the project, and detailed the widespread support for the project shown by community volunteers and donated labor from Sorensen Gross Construction Services. When asked about his impression of Flint, Hook intimated his thoughts on the city since his arrival, and his welcoming words reflect a welcoming city.

“I really like Flint a lot, actually. Coming from San Diego, all you get are negative statistics about Flint, and that’s basically most of what the country sees. I think we all get a really bad image of this part of the country from the media. But I’ve discovered there’s so much more to this city than the statistics. Everybody’s been unbelievably friendly and outgoing, which is something you don’t find in San Diego. There, people just stare at the sidewalk and walk right past you. Here, people will approach you. I’ve been stopped 20 or 30 times a day by people wanting to know what this is; in San Diego, they would just blow right by.”

Hook views the pavilion as a necessary component to the redevelopment of Flint. He frankly stated that, “a parking lot can’t be a city’s main attraction.” He cited the Guggenheim Museum in Bilbao, Spain as an example for Flint to follow. The once heavily blue-collar Spanish town saw setbacks for years until an artistic revival took place, giving the city the Guggenheim, which brings in millions of dollars annually through tourism. Hook believes that “if Flint wanted to take a bold step and build something iconic, it would have the potential to bring in a lot of money from outside, which is really what the city needs.”

Not long ago, a cartoon appeared in print of a Detroiter attempting to attract international business to his home town while also spewing hateful comments about the city. It is interesting to witness people saying they are “for Flint” and that they want to see a better Flint, and then in the same breath, describe the place as if it’s a combat zone. Such behavior is counter-productive. It was refreshing to hear from people outside of Flint who not only visit, but also leave with positive things to say. These foreigners to Flint truly enjoyed their stay. Lord haste the day when residents enjoy their lives and communicate their joy to one another daily. If nothing but joy is left to the media to publish, then maybe, just maybe, perceptions and behaviors will change.