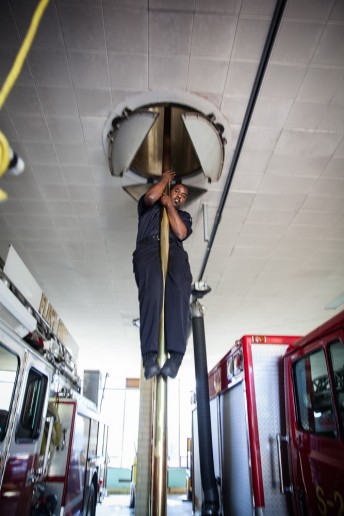 The City of Flint Fire Department is Genesee County’s largest full-time fire department. Under the direction of Fire Chief David Cox, the dedicated team of firefighters and support staff are ready around the clock and at a moment’s notice to respond to fires and other emergencies that endanger human lives.

Chief David Cox oversees a staff of 75 people, seven of which are in non-firefighting positions. On staff are a quartermaster, district commander, two fire prevention officers, a training officer, fire inspector, a full-time arson investigator and firefighters. Two administrative aides also help keep the operations running smoothly. “I couldn’t get along without them,” says Cox. The Chief had previously retired from the fire department after more than 23 years of service, but after a few years of retirement, he returned in 2013.

“Firefighters are some of the most selfless public servants you will ever encounter.”
Denis leary

The firefighters are certified EMTs and are first responders for Tier 1 medical calls. From the time a call is “toned out,” only one minute and 15 seconds elapses before the firefighters are on the truck. They work a 24/48 shift – 24 hours on duty and 48 hours off. There are currently four substations and a fifth will reopen in the near future. 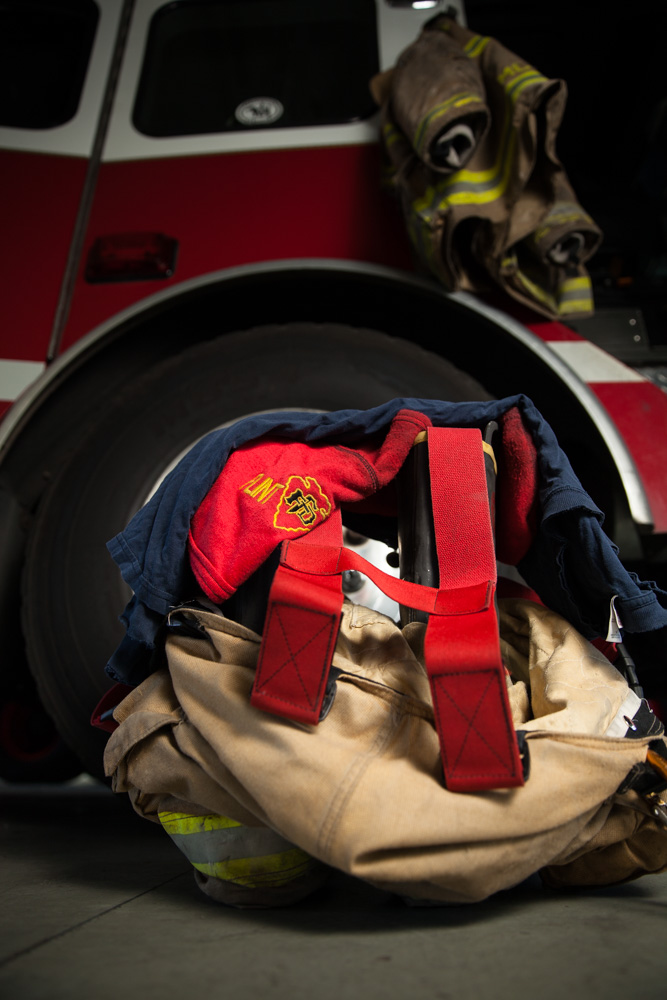 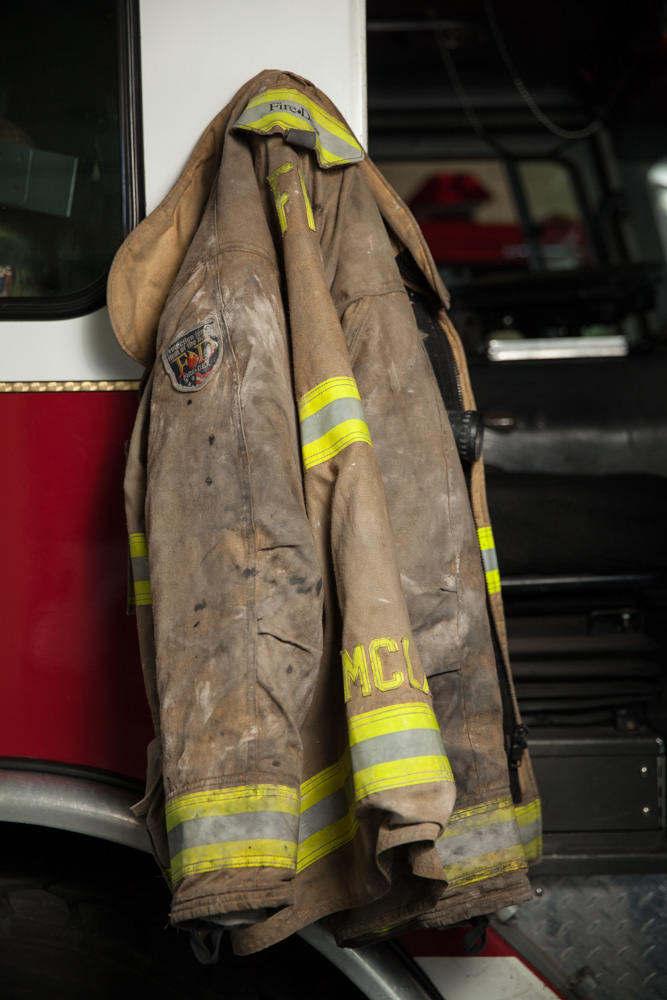 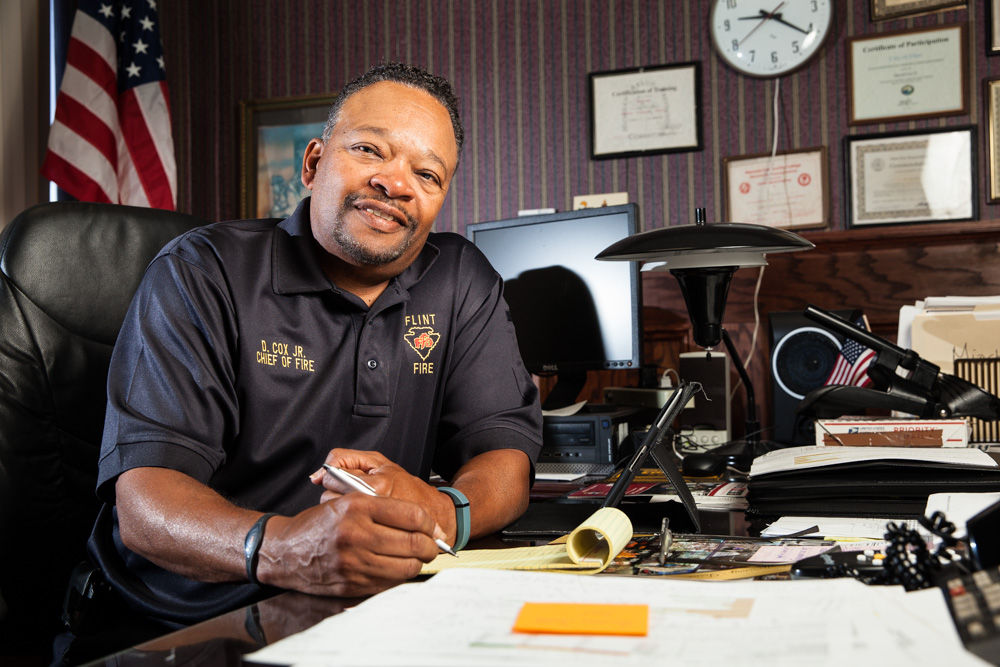 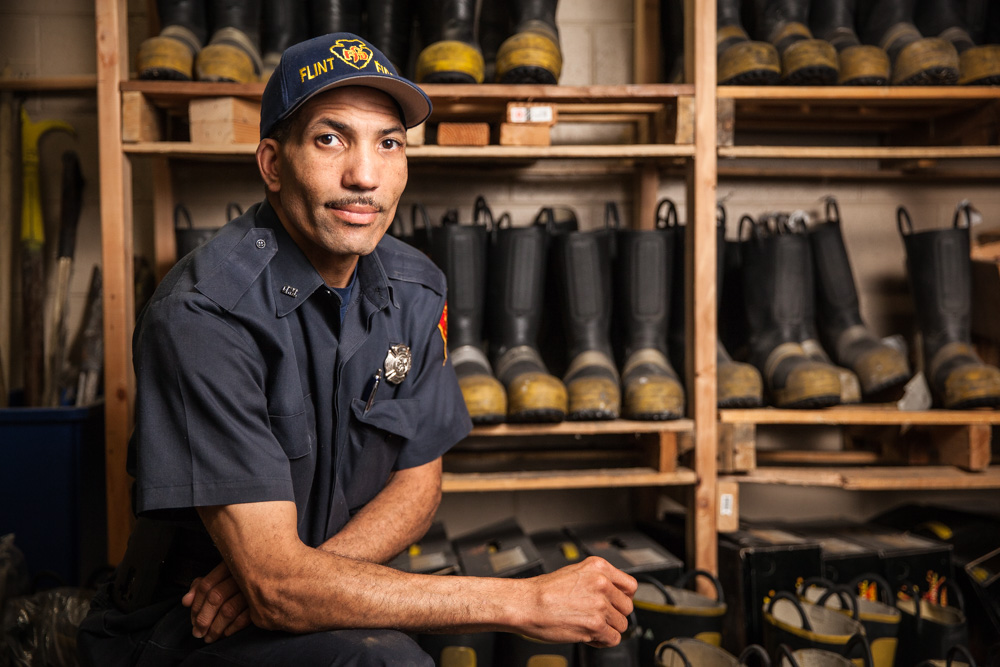 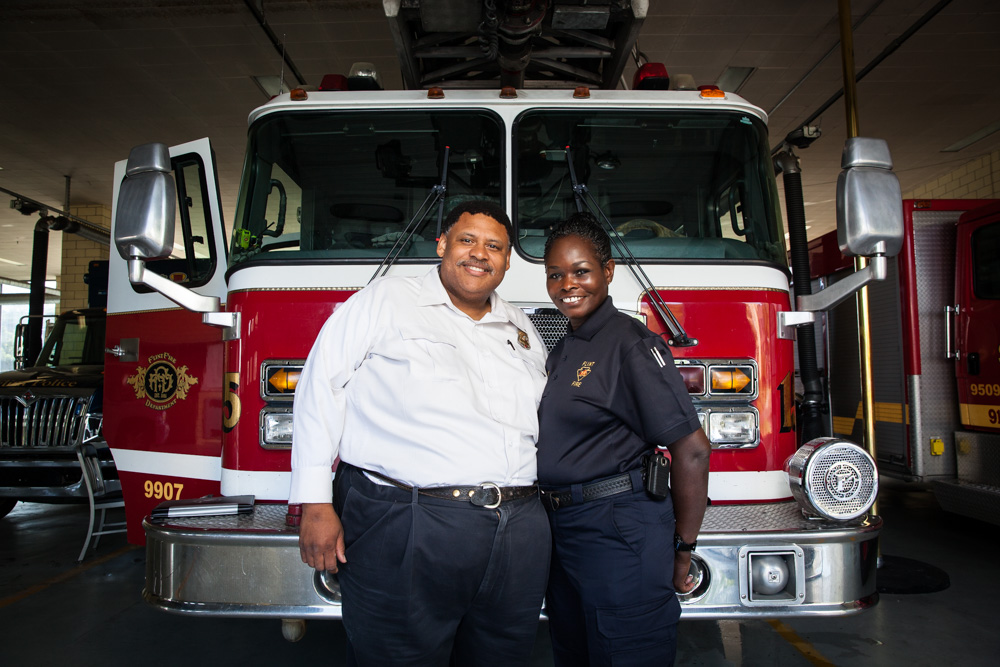 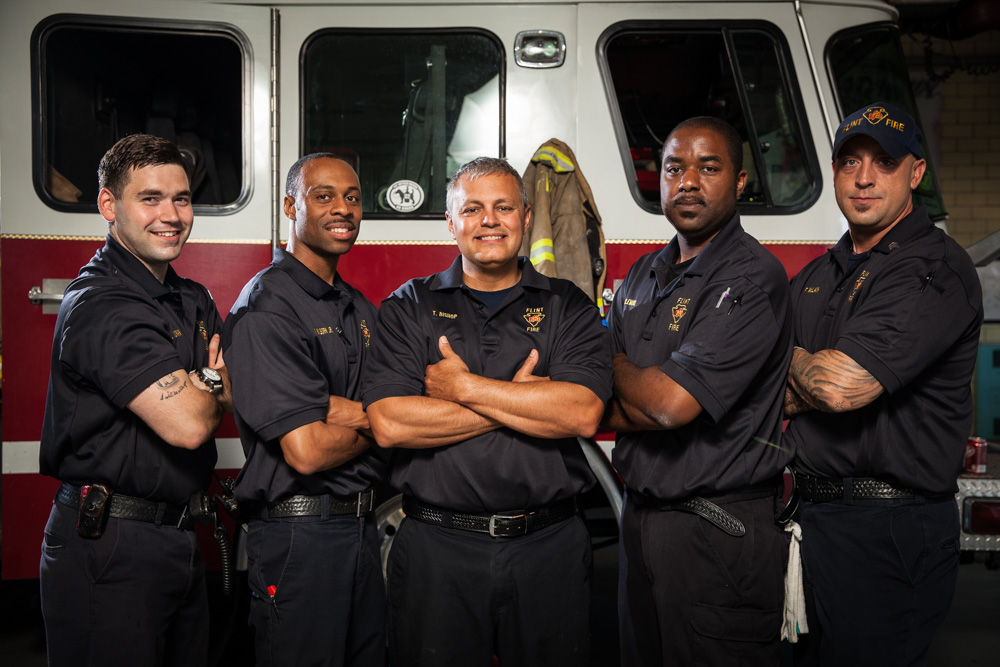 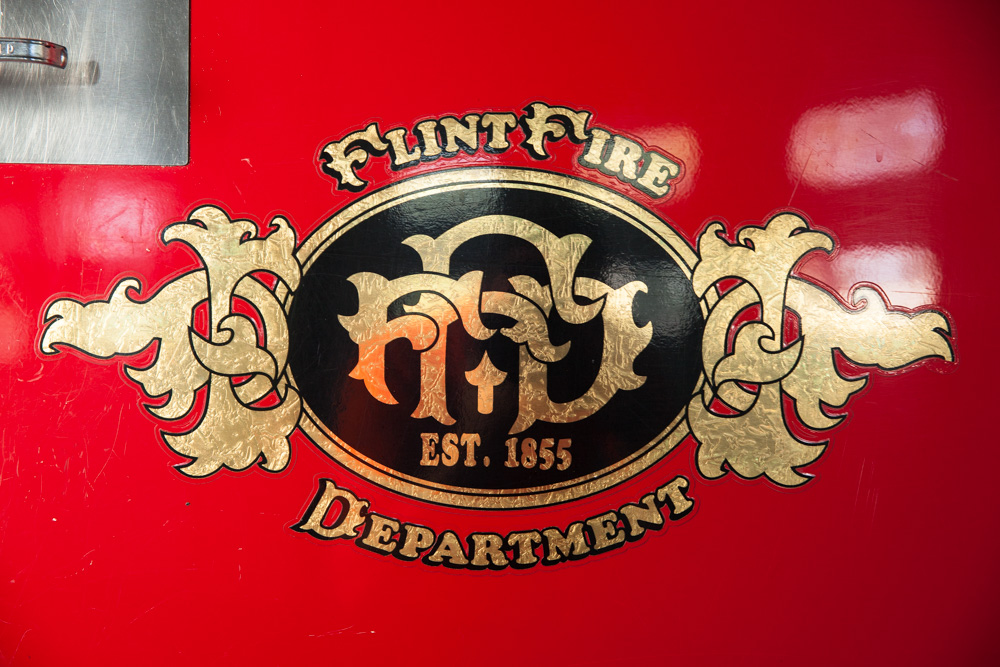 As of this writing, the City of Flint Fire Department responded to 131 fire calls. Some days are less action-packed than others, and more time is spent preparing for runs, training, inspecting, cleaning and communicating with the public about fire prevention. My City Magazine spent a day last month with the selfless public servants at the City of Flint Fire Department.

The Chief meets with his staff to go over reports and discuss the day’s scheduled activities. He first met with the Fire Prevention Team, Michael Cochran and Carrie Edwards. Cochran performs inspections at businesses and addresses any complaints. Both Cochran and Edwards handle public education and attend career fairs, schools and local meetings to talk about fire prevention. “We talk to kids about safety in their home and the importance of having an escape plan,” says Carrie. Michael also does arson investigation. “The public doesn’t realize the plethora of things we do,” Michael says.

The Chief then meets with the Quartermaster, Rico Phillips. A quartermaster is the department’s procurement agent. “I make sure everyone has what they need,” says Phillips, who has been with the department for 22 years. On a typical day, he’s in charge of obtaining everything from toilet paper and cleaning supplies to equipment and new boots. He also enjoys getting out into the community to help with fire safety education. Ramsey Clapper is the Safety Officer charged with training and overall safety at the fire scene and the station. “I keep people safe,” says Ramsey. “That’s my main job.” 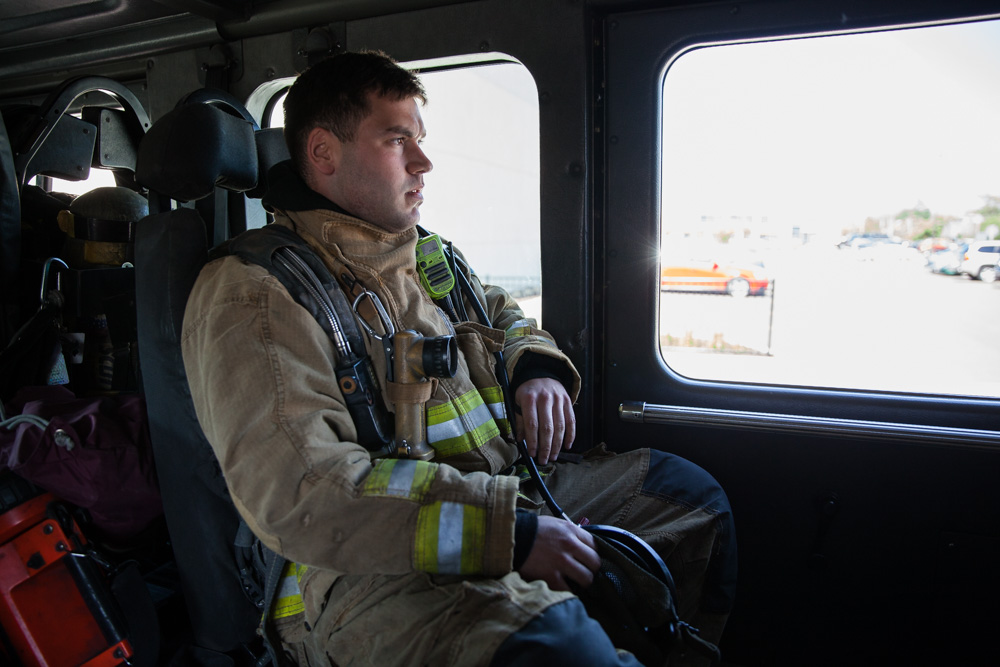 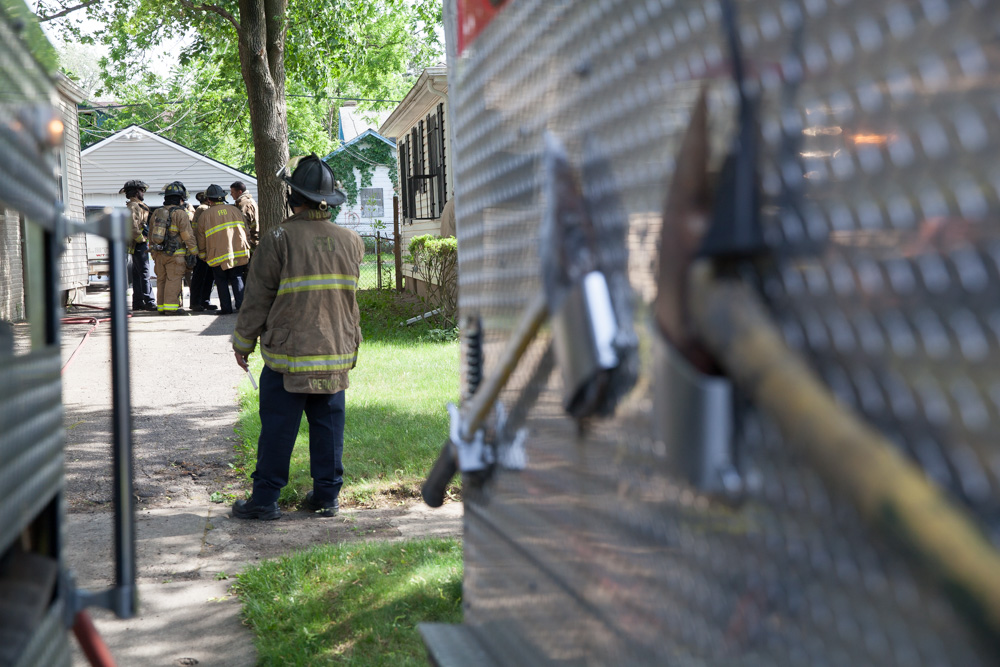 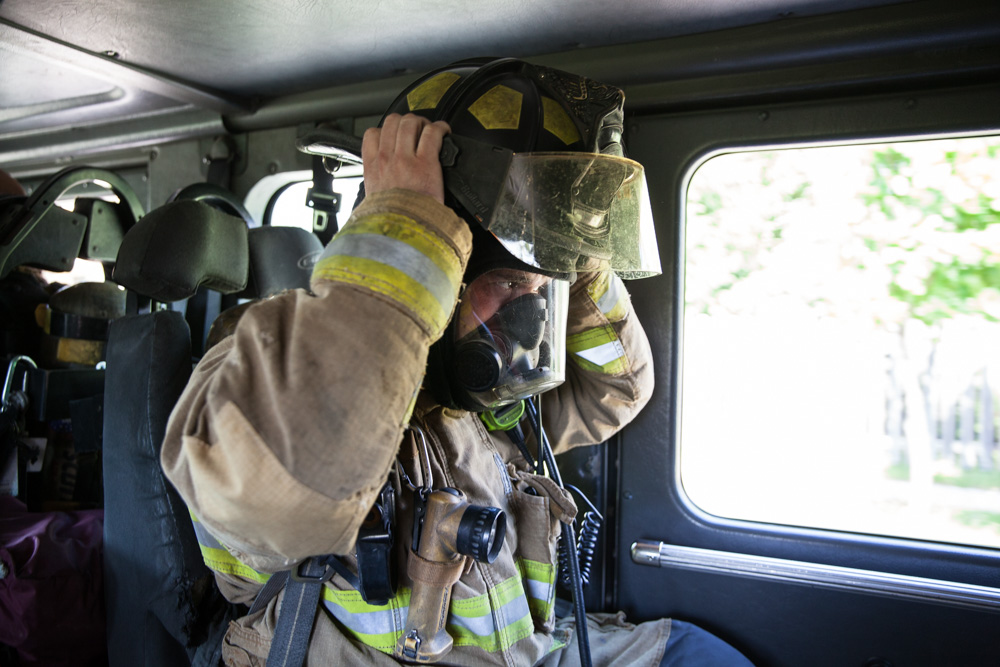 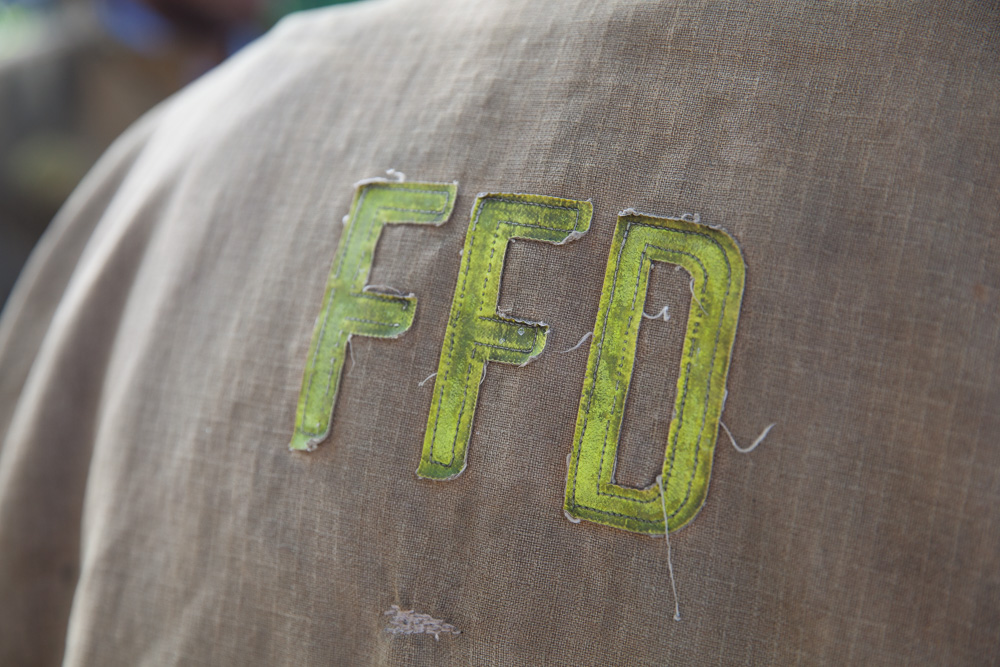 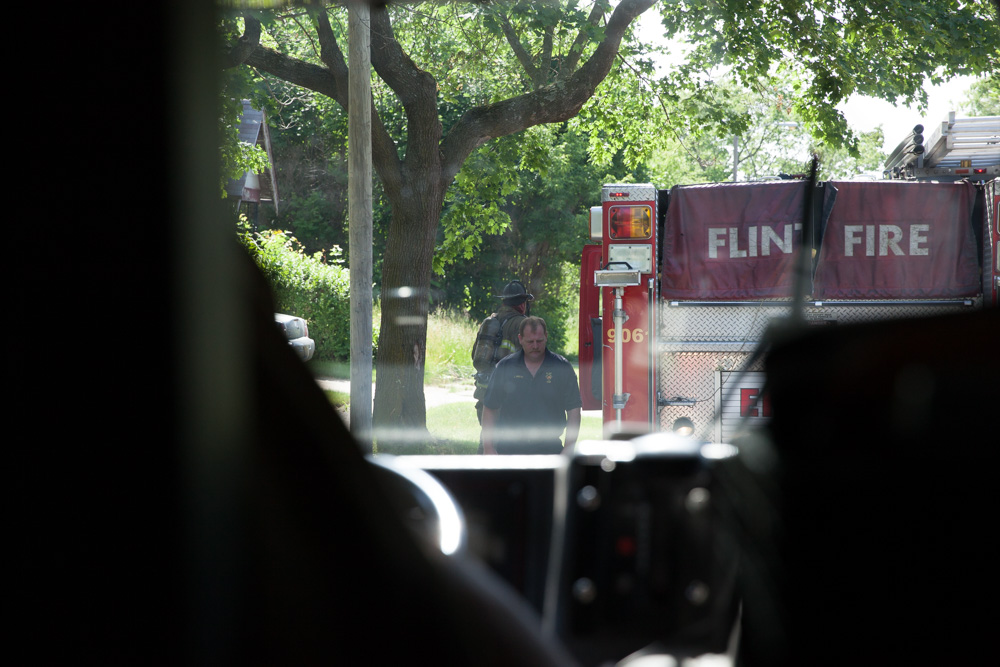 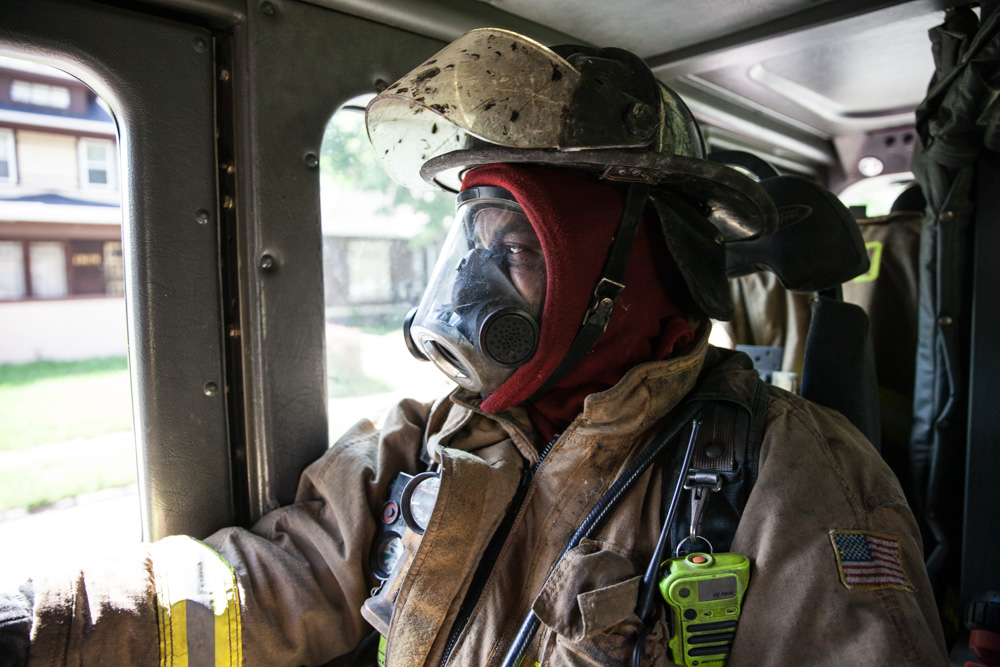 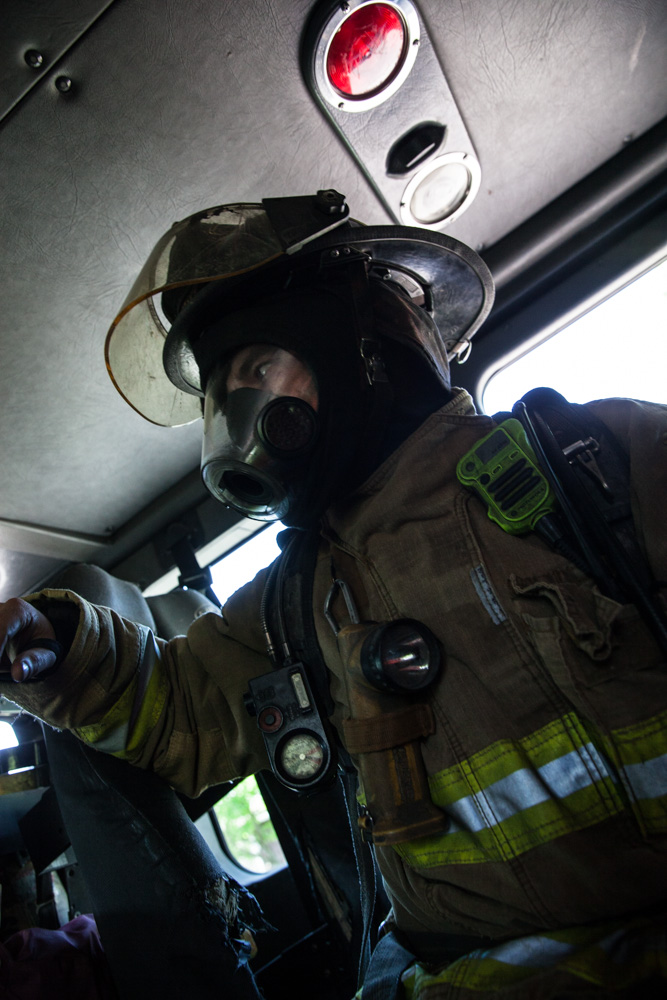 My City Magazine met with the squad on duty for their 24-hour shift under the direction of District Commander Christian Perkins. Also on duty was Sgt. Frank McLain, Firefighter Jeremy Yonan, Driver Greg Wilborn, Jr. and Firefighter Marcus Clemons. The squad began their shift at 0800 (8am) but usually arrives early to make sure they are ready for an immediate call. Yonan, a second generation firefighter, arrives early, stores his gear, inspects the truck and bunker gear, then does a rig check on the truck. “There are times when we have to make a run right away,” he says. Clemons says the crew cleans the station and the trucks, inside and out. Each is assigned duties such as cleaning the bedroom, bathroom, floors and kitchen. Today, the squad was assigned to clean the brass pole. Sgt. McLain handles the roll call sheets and assigns the daily duties.

Greg Wilborn says his main responsibility is the operation of the fire truck. “I make sure everything is working properly,” he says. He also makes sure any tools are in place such as a 12-inch circular saw and Jaws of Life® and that the horn and siren are working. “His most important job is to get us to and from a scene safely,” Perkins adds. “We depend on each other. The sexy job may be the firefighter who holds the nozzle of the hose and goes in to extinguish the fire. But you can’t forget about the one who is pulls the hose, delivers the water or the officer who decides how to make entry and find the fire. To do our job successfully, it all depends on teamwork.” 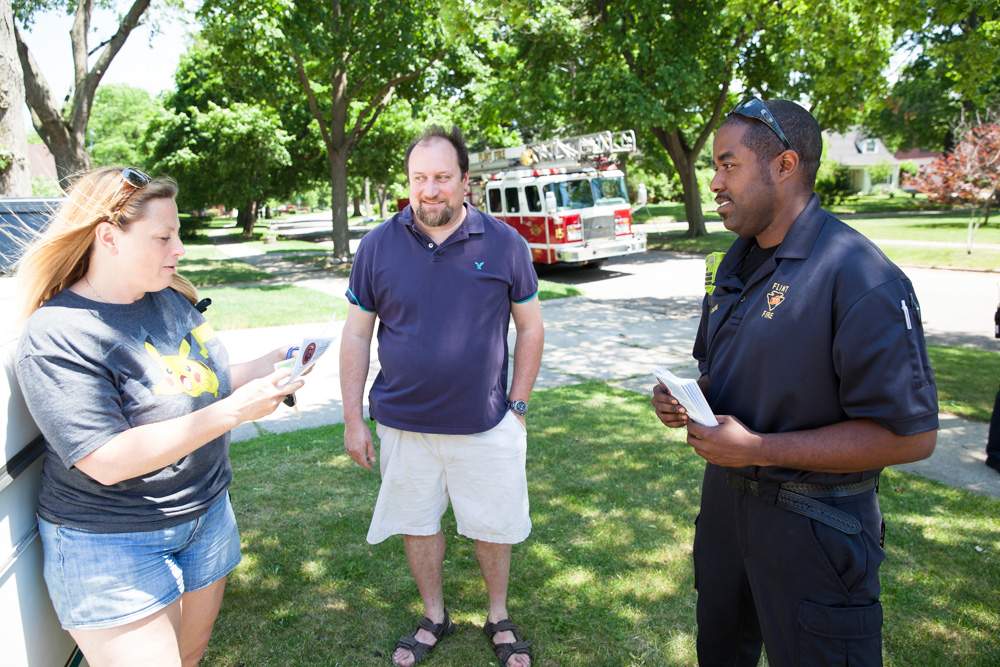 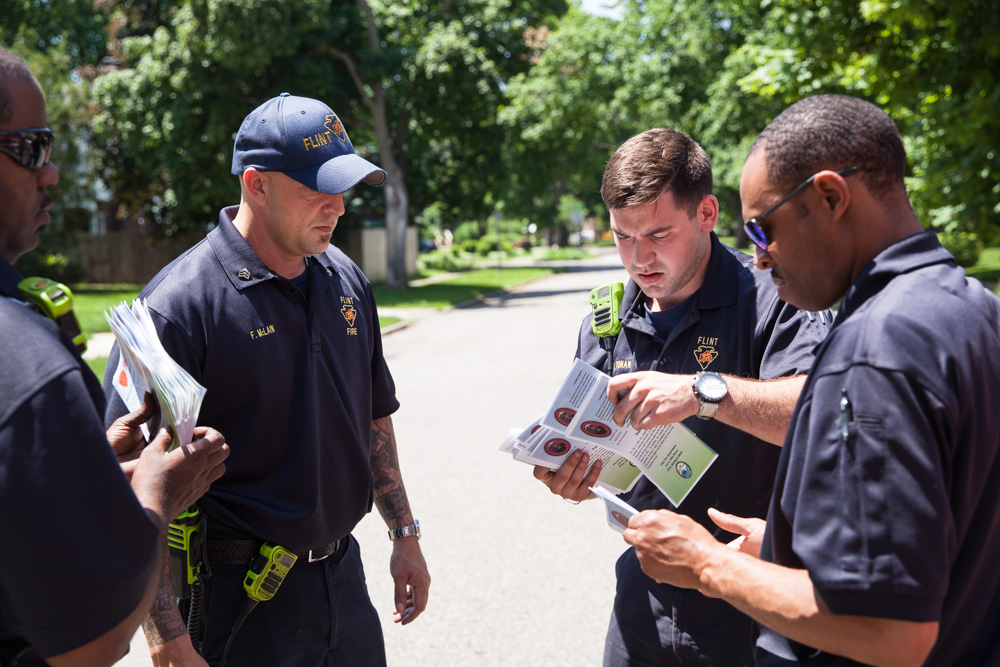 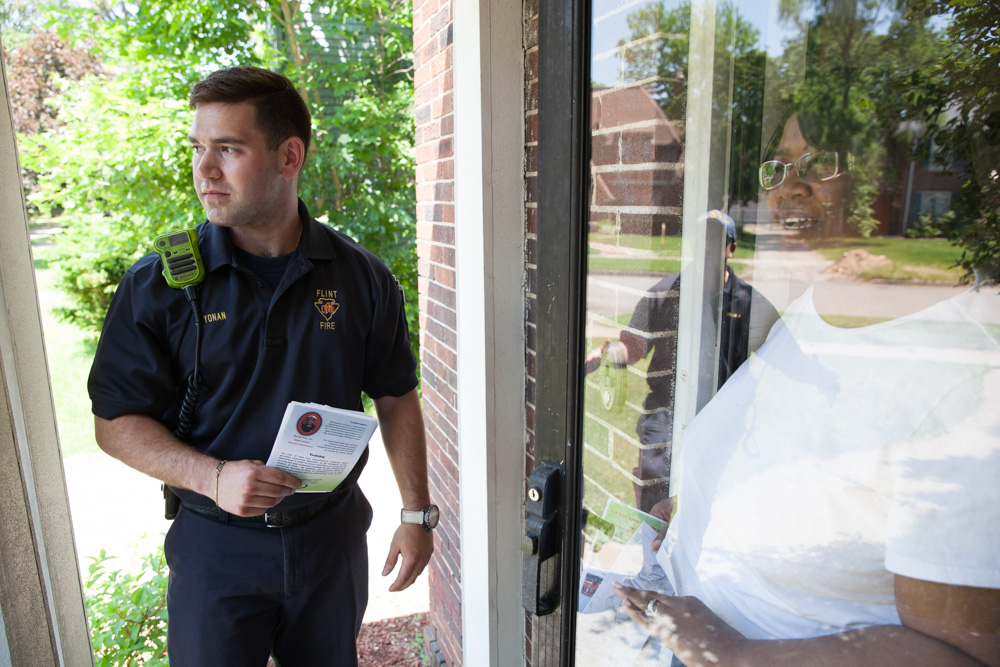 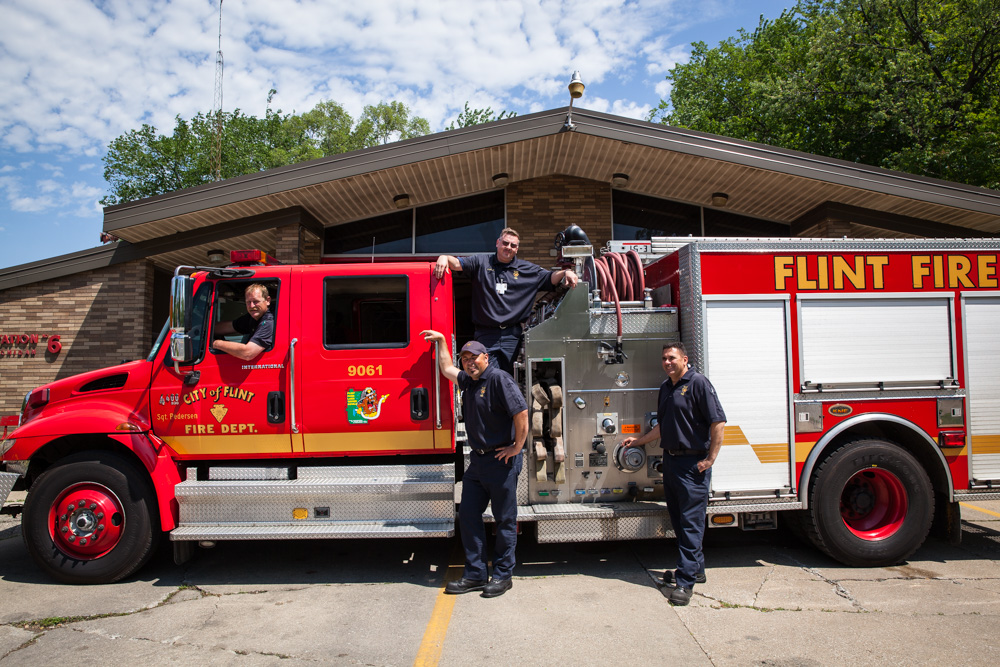 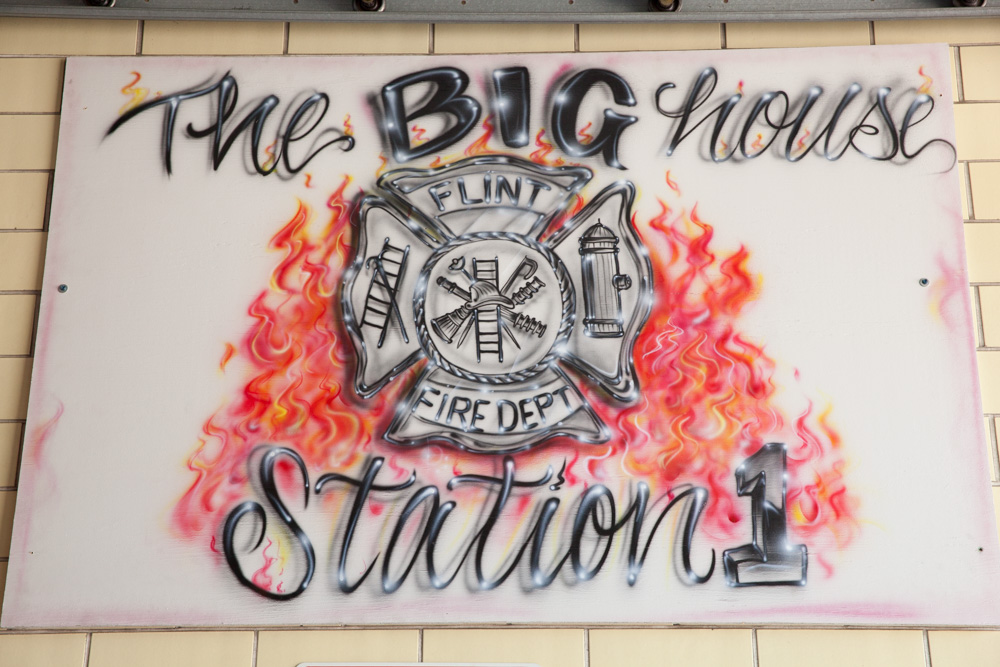 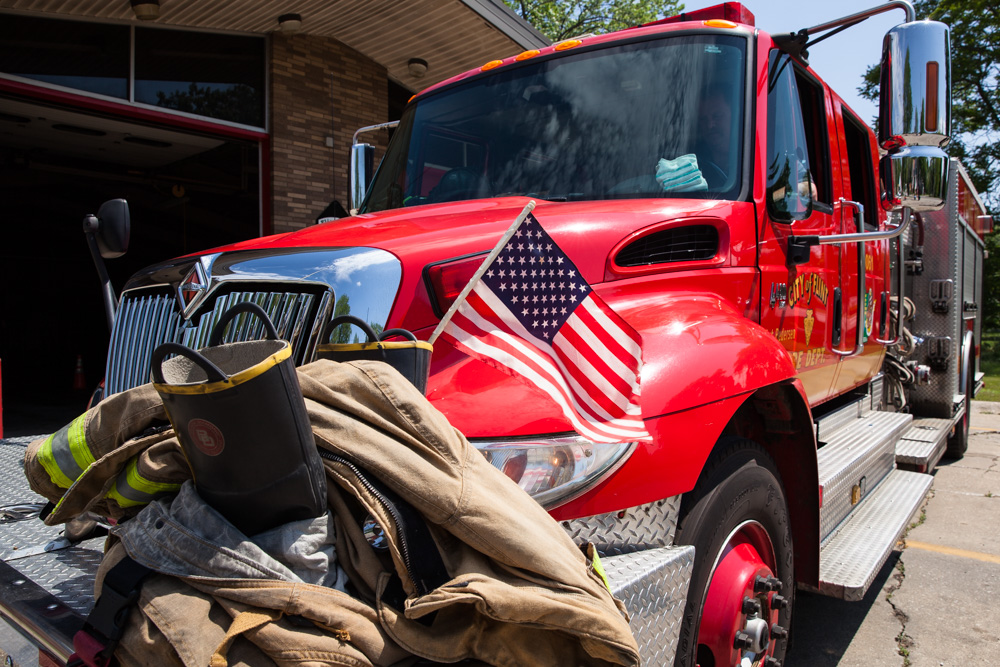 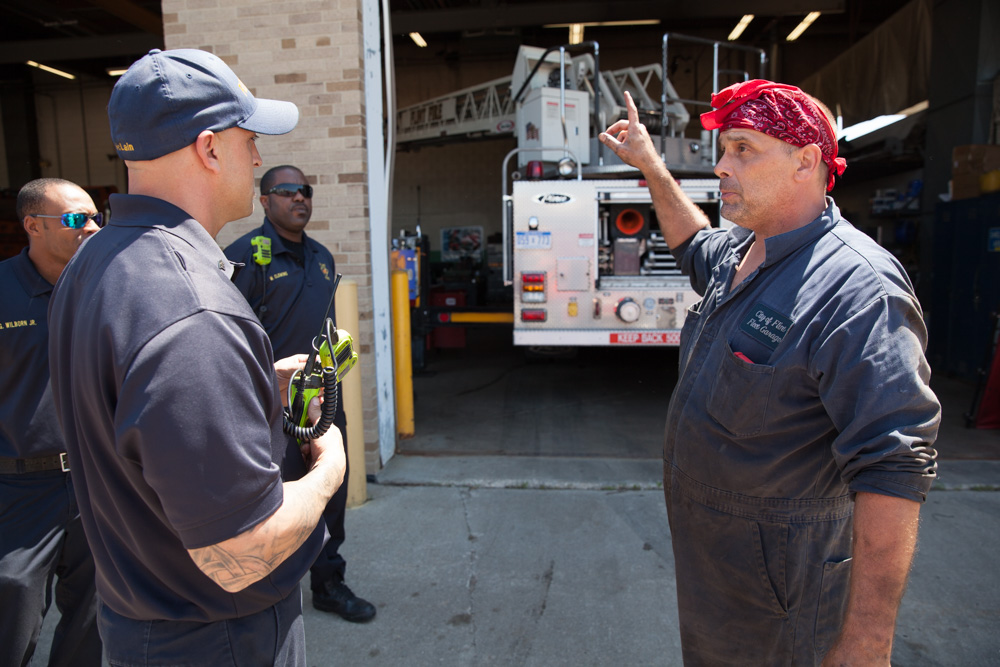 While some meals at the station are shared, the squad members usually fend for themselves and make a sandwich at lunchtime. The living space includes a kitchen, eating area, shared dorm area, and sleeping quarters. “The sleeping quarters are pretty spartan,” Perkins says. There is also a workout room with two new treadmills, as it is a priority of Chief Cox that the squad stays in shape. Breakfast during the week is usually oatmeal or cereal. “Don’t let the donuts confuse you,” laughs Perkins, referring to a box sitting on the kitchen counter. “We are still the fire department!” On the weekends, the crew enjoys a heartier breakfast such as biscuits and gravy.

The firefighters visit a community for the Knock & Speak awareness campaign. McLain says if they aren’t busy with fire or medical calls, the squad often has roundtable training sessions in the afternoon and discusses subjects such as roof ventilation. 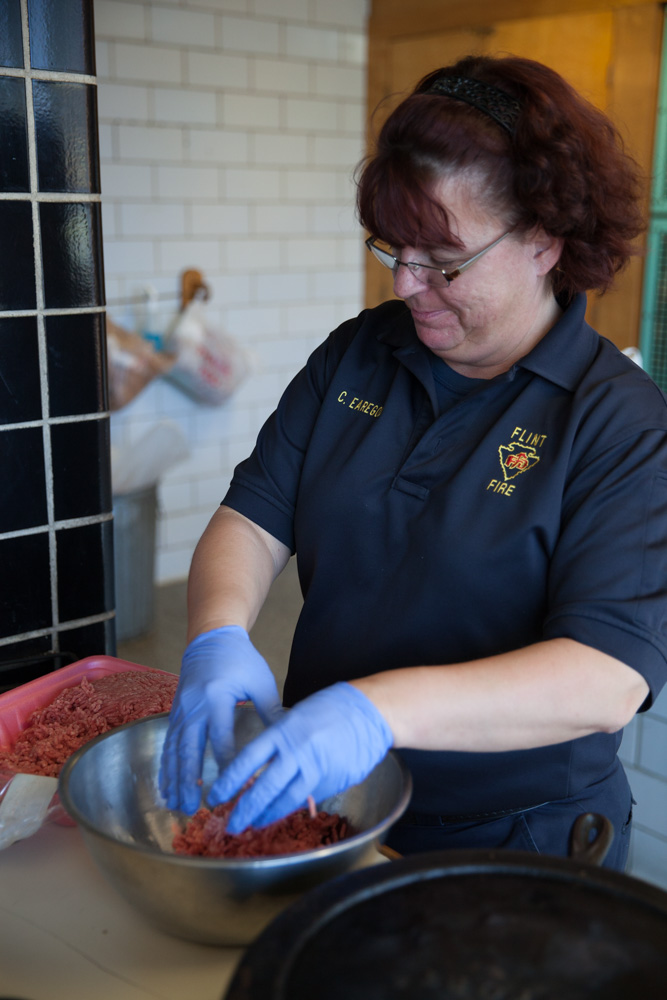 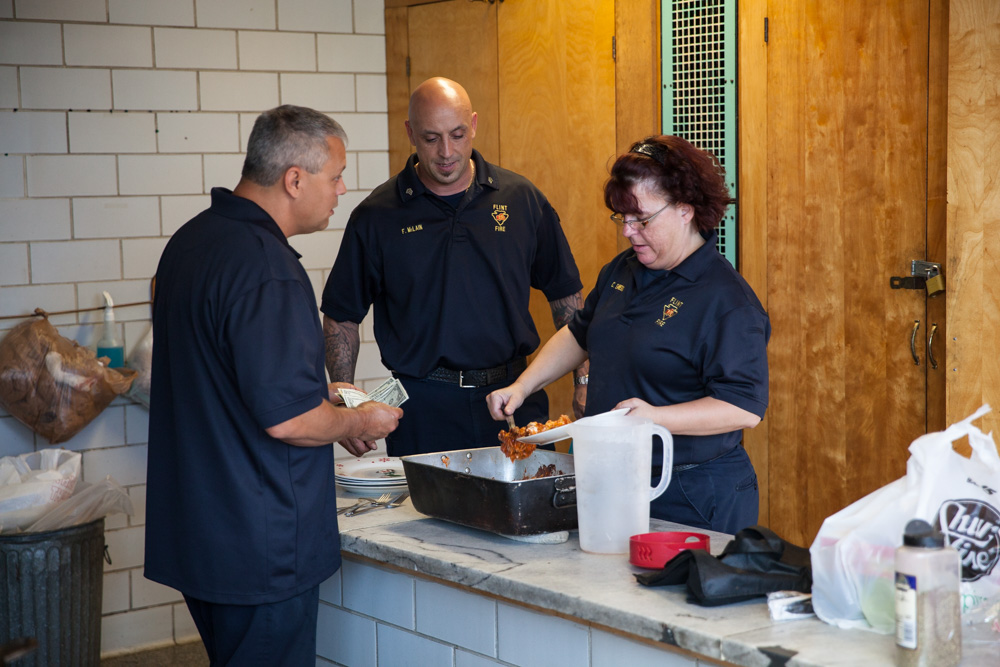 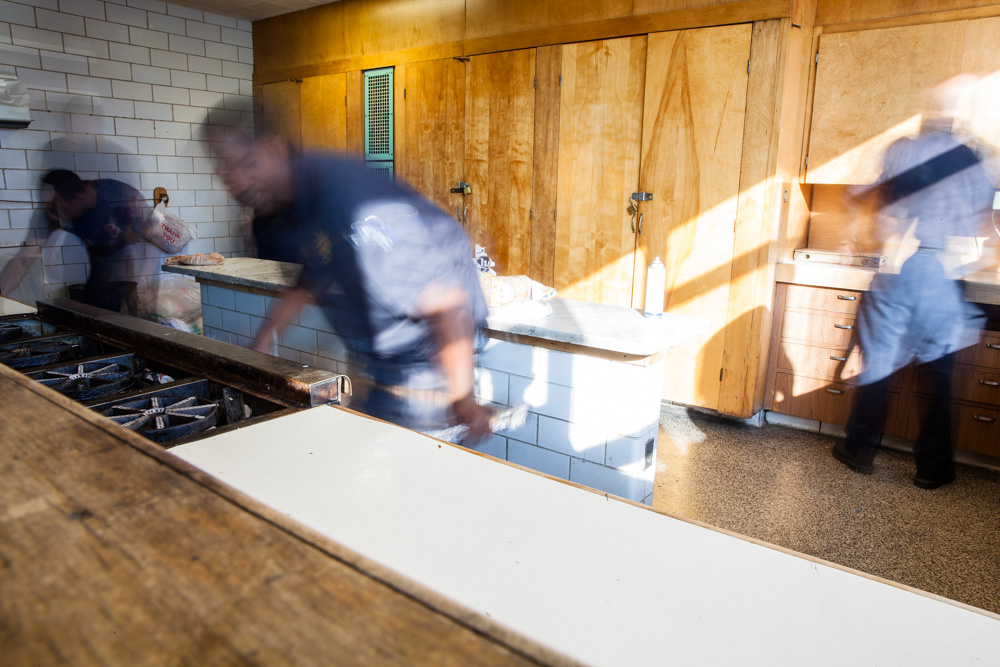 Depending on the shift, the firefighters have dinner together, and sometimes one of them will serve as the cook. If they don’t get a call, they relax in the dorm, watch TV or a movie and eat some popcorn. McLain and Perkins make sure that everything is set for the next day. “Hopefully, that’s it,” says McLain, but sometimes, it’s not. He says that on some nights, they have multiple fires to fight. In the middle of the night, when the station bell rings, the adrenaline starts pumping, the lights come on and heart rates begins to spike. That’s why cardiovascular exercise is so important, says McClain. When there is a fire call, the firefighters slide down the brass pole from the sleeping quarters to the first floor, gear up and are ready to go.

Perkins says that EMT calls are the tough part of the job for many of the firefighters. On a fire call, the primary focus is extinguishing the flames, but an EMS call involves people’s lives and, more often than not, a dangerous situation such as a shooting or a stabbing. “The toughest calls for me are those that involve children,” says Perkins. “To get our job done, we have to compartmentalize our emotions,” McLain added. Sometimes after a particularly stressful situation, they lie in bed unable to sleep, so they make a pot of coffee and just sit and talk about it. “We wear a lot of hats,” McLain laughs. “Firefighter, EMT, therapist … this job involves so much stress, it wears on your mind, body and soul.”

All of the firefighters are extremely passionate about what they do. “We arrive on the worst day of someone’s life and make it better,” Perkins says. “When you are sleeping, we’re working all night long to keep you safe,” McLain says. 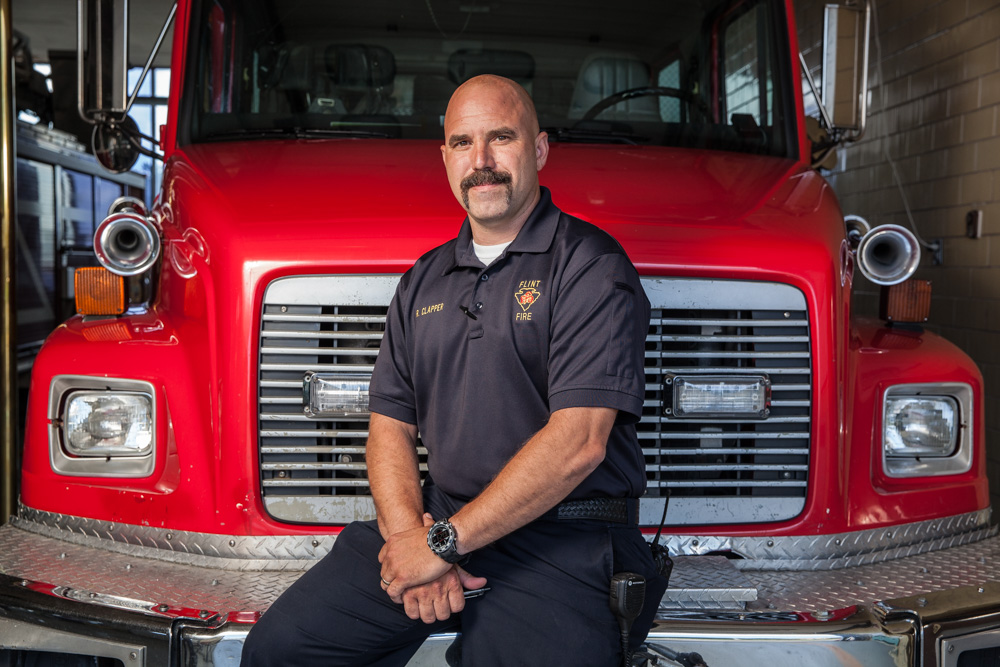 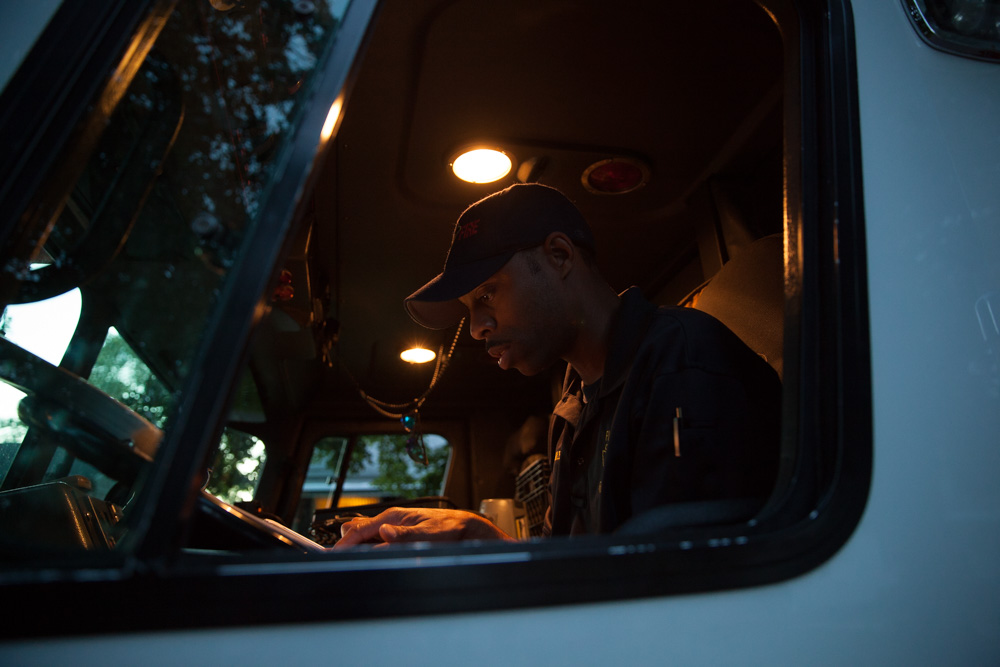 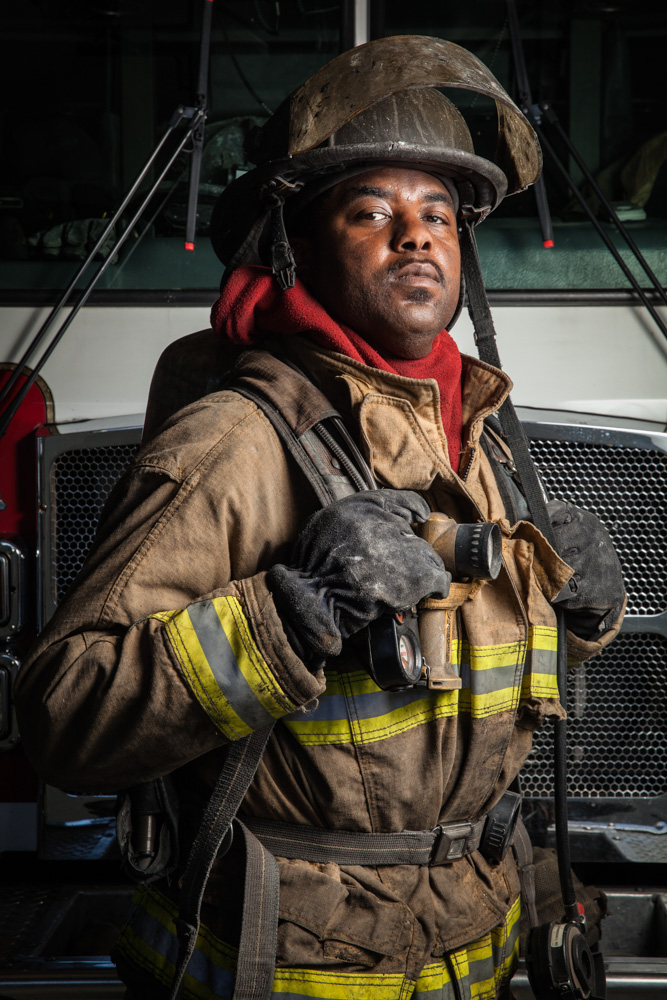 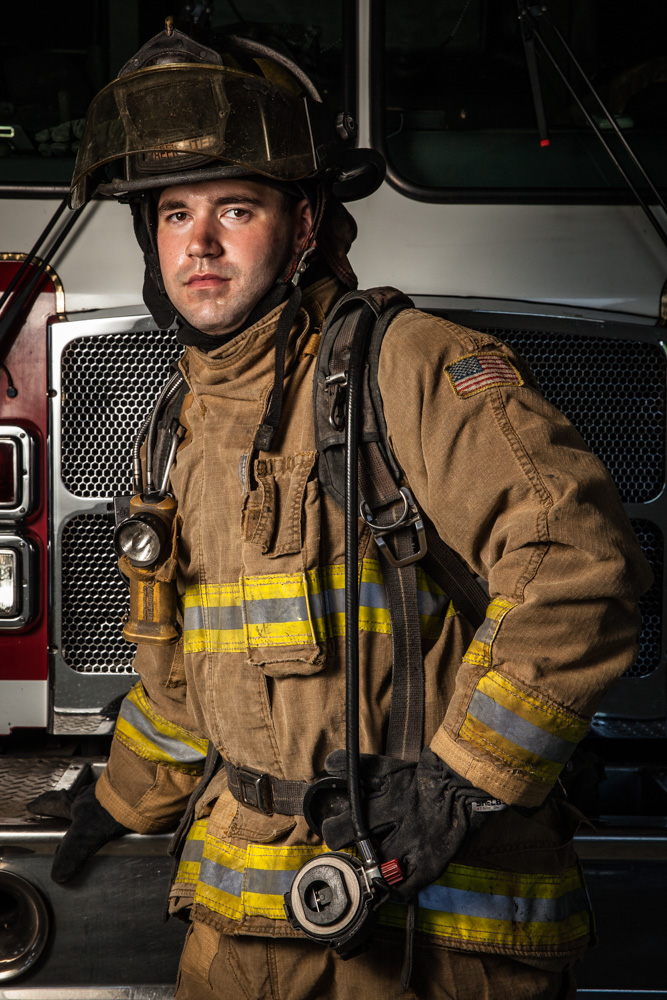 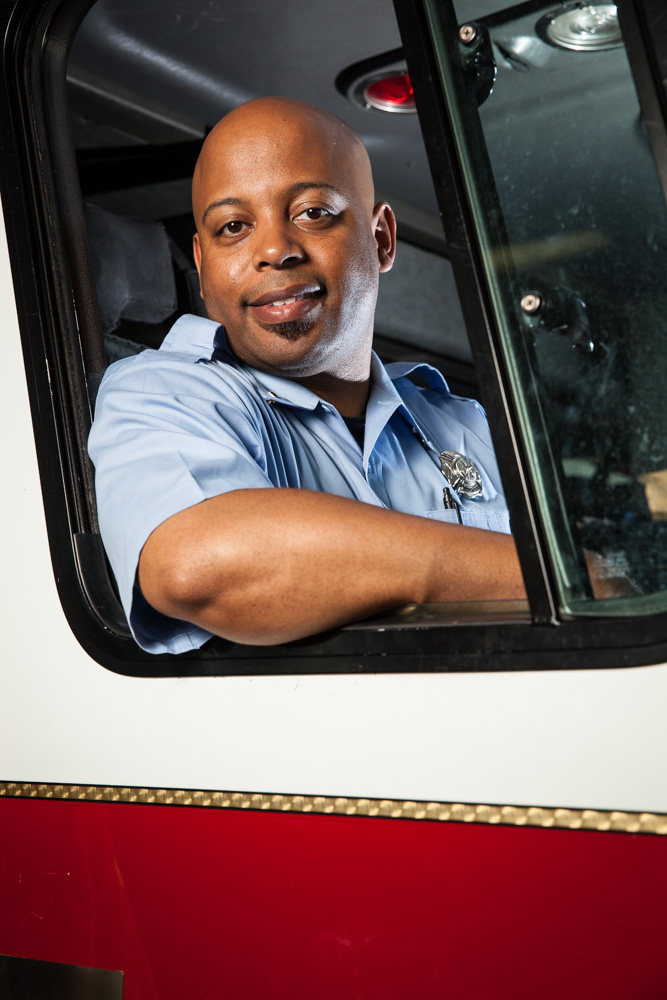 Everybody is up, cleaning and setting up the station for the next shift. They have coffee while Perkins talks to the incoming squad and McLain discusses what happened during their shift. “I love my job,” McLain says. “There’s no better job out there. I believe it’s what I was destined to do.”

Perkins says, “Much like the city of Flint, we’re going through a transition and we don’t know what the future holds. We see glimpses of good things and things are improving. Our utmost priority is fire prevention. If there isn’t a fire, there isn’t a phoenix – no rise from the ashes.”