In a three-part series, My City Magazine is examining the effect that the increasing number of students has on our economy and how educational institutions are impacting the revitalization of the Greater Flint area.

Last month, the University of Michigan-Flint and Mott Community College weighed in on the issue. This month, Kettering University and Baker College talk about the college town trend. 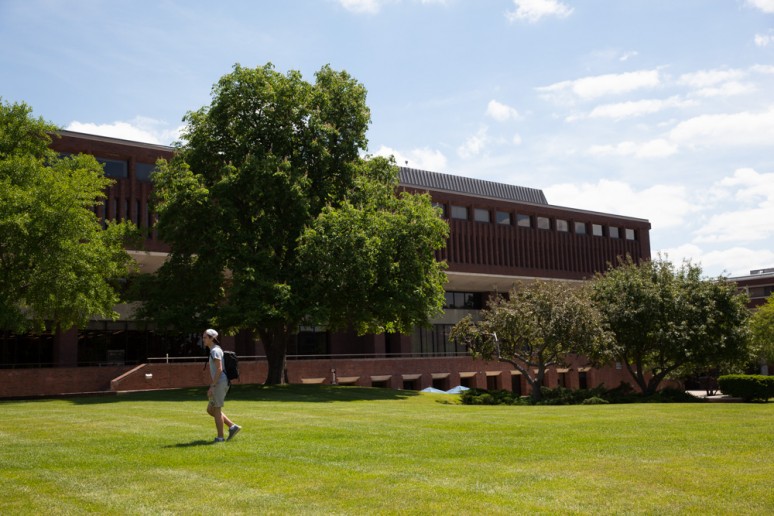 Kettering was founded in 1919 by a group of Flint leaders with a vision for transforming the automobile industry, and was operated by General Motors as General Motors Institute (GMI) until the early ‘80s. Kettering has been an independent university since 1982. The name was changed from GMI to Kettering University in 1998 to honor the man who not only helped found this institution, but also had a strong influence on the concept of professional cooperative education – inventor and industrialist, Charles Kettering. What began as a night school for engineers, managers, designers and technicians has grown into today’s world-class Kettering University with co-op employers in the automotive industry, delivery services, aerospace, paper products, banking, metallurgical, health care and more.

The university has expanded academic programs and offered new opportunities for students over the years, but the story with Kettering is about what has remained the same. “Our co-op program that ensures all Kettering graduates finish their undergraduate education with 2.5 years of paid professional experience is a unique model in today’s higher education landscape,” reports Dr. Robert K. McMahon, President, “and it also is a great predictor of success.” According to PayScale.com’s 2015 rankings, Kettering University is 12th nationally and No. 1 in the Midwest for “Return on Investment.”

“Our enrollment has been growing significantly — in fact, our incoming 2015 freshman class is projected to be our largest in more than a decade.”
Dr. Robert K. McMahon
President
Kettering University

So, with Kettering’s impressive history and that of the other Greater Flint area institutions, is Flint becoming a college town? “Absolutely,” says the president. “Major cities worldwide would love to have just one college or university of the caliber that exists in Flint and we have four nationally and internationally recognized higher learning institutions right here in the city limits. That’s an amazing resource for Flint and few cities – if any – have a comparable mix of the complementary institutions that combine to bring more than 10,000 students into the city on a daily basis.” 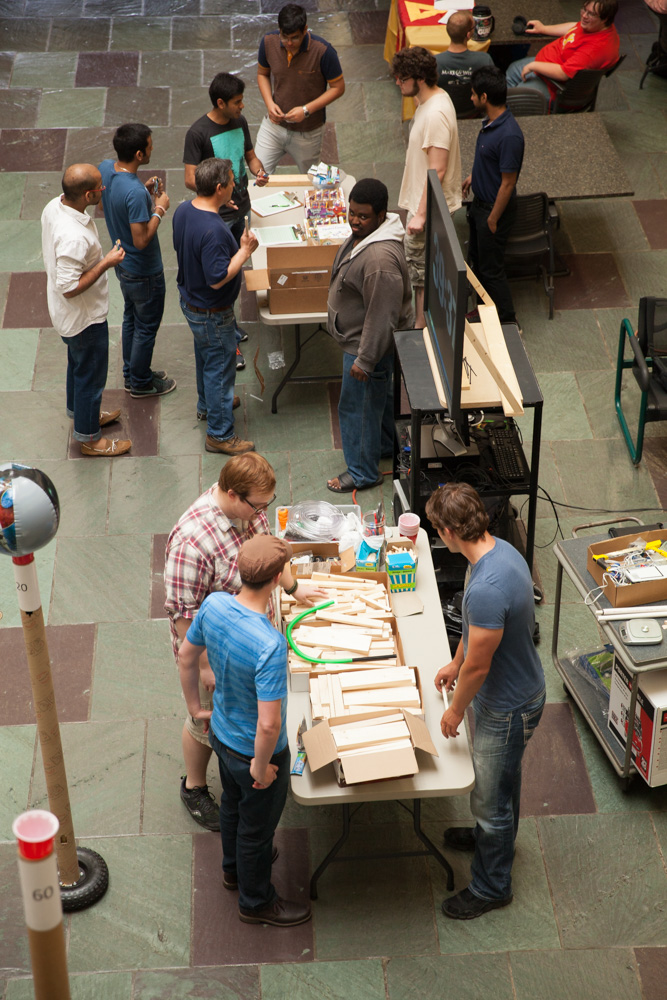 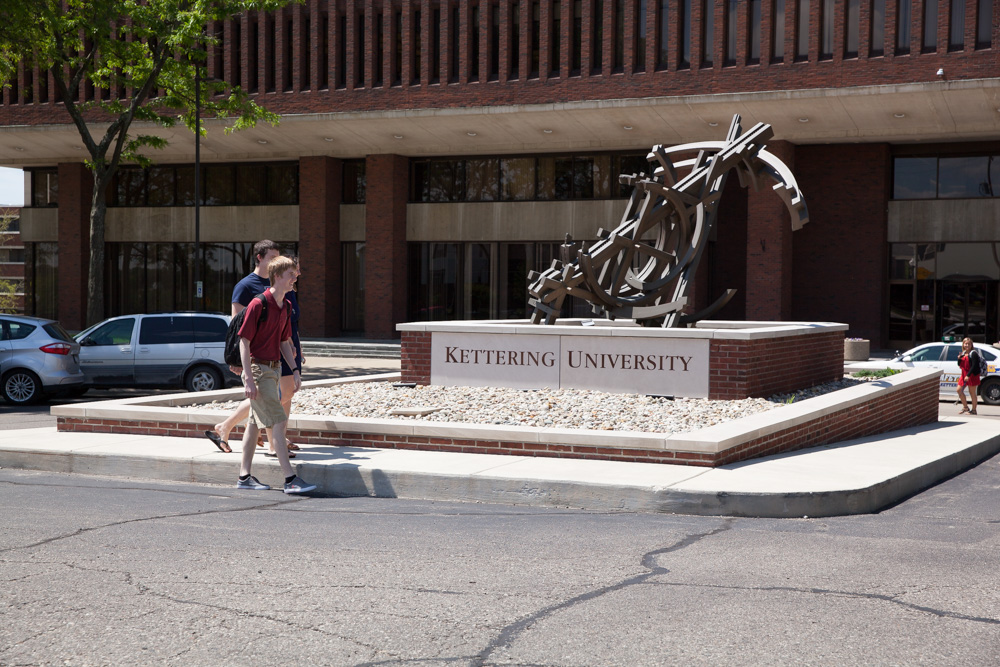 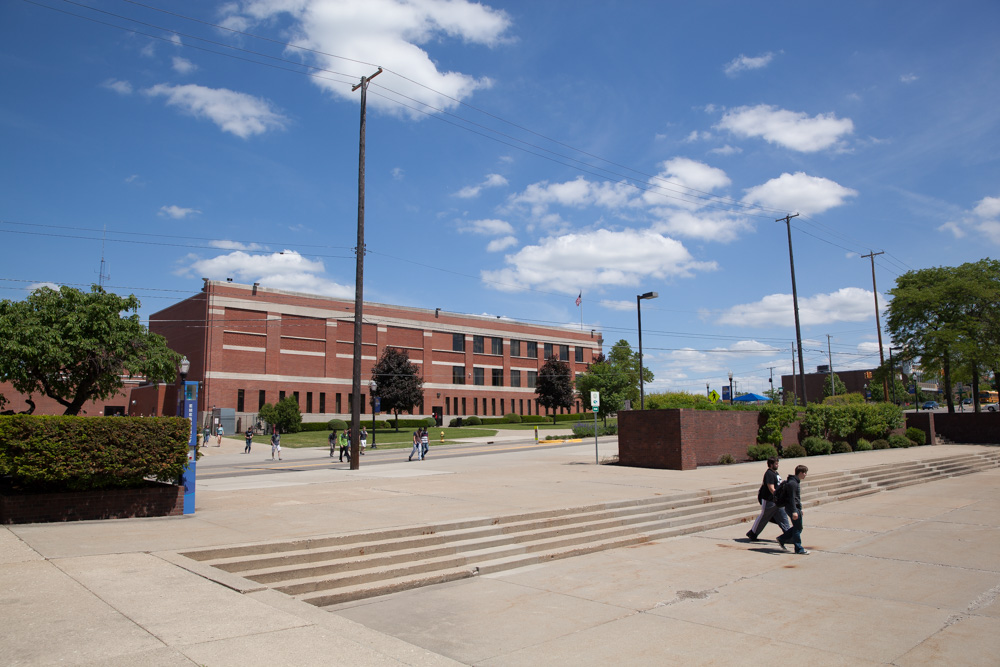 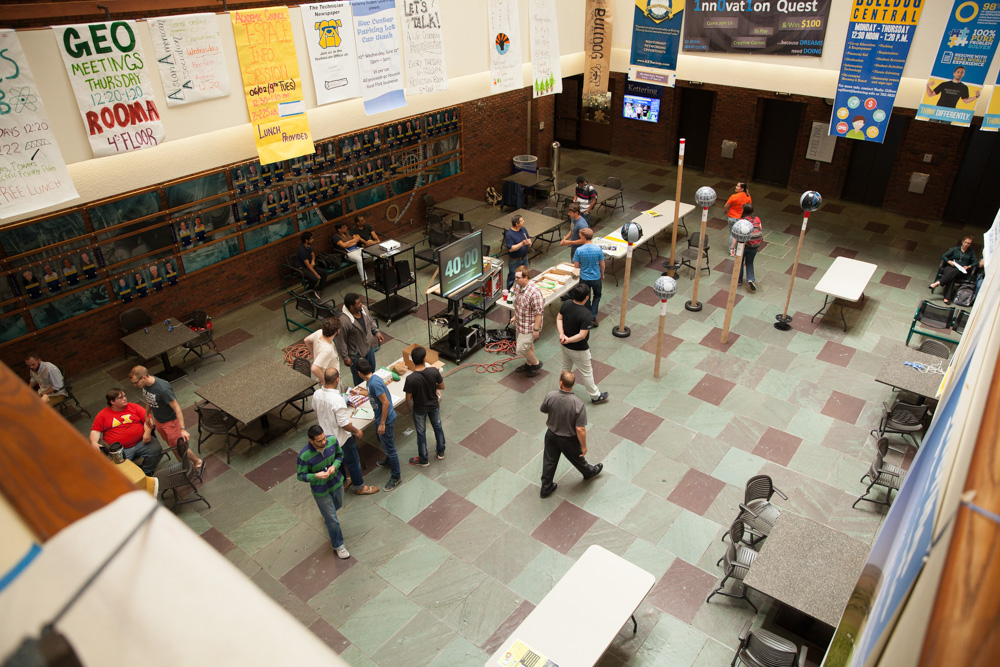 According to Dr. McMahon, there are typically 450 to 550 students graduating from Kettering University per year. “Our enrollment has been growing significantly – in fact, our incoming 2015 freshman class is projected to be our largest in more than a decade,” he reports. The current enrollment is just over 2,000 total undergraduate and graduate students.

Kettering has approximately 500 full-time and part-time faculty and staff. And much has been done to expand the school’s educational opportunities. In September 2014, the university opened the FIRST Robotics Community Center – the only facility of its kind on a college campus in the country. The Center currently houses five local high school robotics teams and a consolidated team called Metal Muscle, which includes students from districts in Genesee and Lapeer counties as well as private and home-schooled students. The Center has increased opportunities for area students to participate in the FIRST program, gain exposure to the valuable experiences in science, technology, engineering and mathematics that FIRST offers nationwide. More importantly, they gain an immersive experience on a leading STEM and business university’s campus and have access to Kettering University faculty, staff and students as mentors. “FIRST Robotics has an amazing reputation nationwide for building interest in STEM concepts in students at young ages and encouraging them to pursue a college education,” says the president. “Because of Kettering’s FIRST Center, Flint area students have more resources and support to get involved in FIRST than students in any other region of the country.”

Majors that have been recently added to Kettering’s academic programs include Applied Biology and Chemical Engineering. Kettering also has a Pre-Med course of study, with assurance agreements with Michigan State University Medical School and Lake Erie College of Osteopathic Medicine, guaranteeing qualifying pre-med grads a seat in those programs. “Our Physics program, which is the only one in the world accredited by ABET, is celebrating its 20th anniversary this year.” reports Dr. McMahon.
“Our Mechanical Engineering program was ranked fourth in the country this year by U.S. News and World Report, and Automobile Magazine listed Kettering as one of five universities nationwide to attend for students hoping to break into the auto industry.”

What does the future hold for Kettering University? According to the president, the university recently announced plans to construct a state-of-the-art automotive research lab and proving ground on a 19-acre parcel of the former “Chevy in the Hole” property at the corner of Chevrolet Avenue and Bluff Street. Once constructed, it will be the only facility of its kind on any college campus in the country and will attract major industry research and testing opportunities to Flint.

Kettering also recently unveiled a Campus Master Plan that will ensure the campus meets the rapidly changing needs of the next generation of students and, eventually, the next generation’s workforce. The first project will include construction of a new Learning Commons building near Kettering’s current recreation center.

Kettering University plays a big role in the community. The university took over operations of Atwood Stadium from the city of Flint in 2013 and, after a successful fundraising campaign, is in the midst of replacing the dated playing surface with state-of-the-art field turf as well as a widened field that will accommodate football, soccer, lacrosse and rugby at youth, collegiate and professional levels. “Atwood will once again serve as a central community gathering space capable of hosting a wide range of events in late summer of 2015,” says Dr. McMahon.

Kettering faculty and students are engaged in numerous community projects, using their engineering, science and business expertise to help create a better Flint. Recent research projects include helping Metro Community Development construct a facility that will serve as a source of fresh produce and fish for the community, building an irrigation and geothermal heating system for Harvesting Earth Farm, helping streamline delivery processes at the Food Bank of Eastern Michigan and helping Hurley Medical Center solve parking issues.

The university also hosts monthly “Service Saturdays” during which students, faculty and staff partner with community organizations and neighborhood associations to complete service projects. “Last year, nearly 400 volunteers from Kettering served more than 1,200 hours on various cleanup projects within the community,” says Dr. McMahon. The university secured a $1 million grant from the Department of Justice and a $150,000 grant from the Center for Disease Control, both of which are helping with community development efforts in the University Avenue Corridor region. “The university has been active in taking over blighted properties,” says Dr. McMahon, “razing dangerous structures and creating and maintaining green spaces that make the neighborhoods surrounding Kettering safer and attractive for economic development.”

In 2013, Kettering University closed a party store and replaced it with an Einstein Bros. Bagels franchise and Flint Police mini station. Since it opened, Einstein’s has become a popular morning and lunchtime gathering spot for not only Kettering’s campus community, but the surrounding neighborhoods, businesses and community organizations.
Kettering has served as the home location for many community events over the past two years, including Flint Police Athletic League youth sports at Atwood Stadium, CANUSA soccer games, a free public ice skating rink at Atwood Stadium and Flint River Watershed Coalition’s annual GREEN Summit for high school students in Genesee. 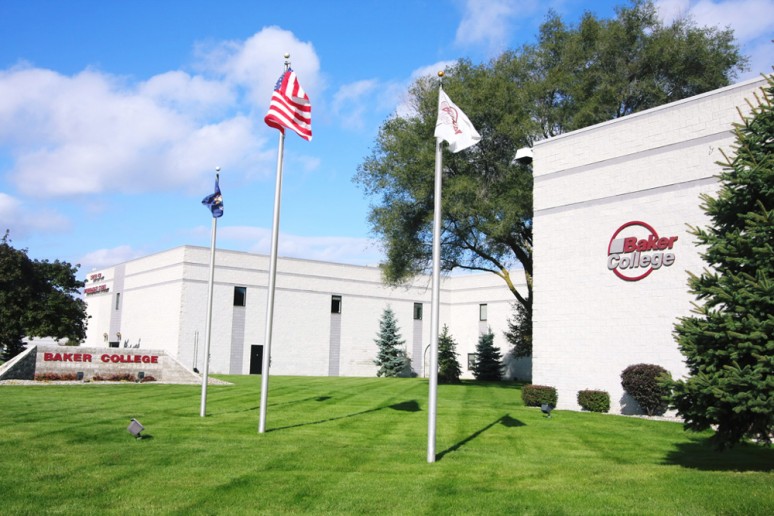 The beginnings of Baker College trace back to the turn of the 20th century, with the founding of Muskegon College by Woodbridge Ferris, who later became Governor of Michigan and then a U.S. Senator. Just two decades later, Eldon E. Baker, an educator who built a highly successful business college in Winfield, Kansas, moved to Flint and founded Baker Business University, which stood at the corner of Court and South Saginaw streets. In 1965, these two institutions came together under a single academic group. Throughout the years that followed, the schools continued to thrive and the group began to expand its outreach through the acquisition of other schools and locations.

Today, Baker College is the largest not-for-profit, independent college in Michigan. As a career college, Baker provides quality higher education and training to enable graduates to be successful. Baker grants certificates and degrees in more than 150 programs. The college has been a pioneer in online education. Headquartered in Flint, Baker College has 12 campuses statewide. The school’s online and graduate studies campuses are in Flint. Baker College of Flint is the largest on-ground campus with a 40-acre main campus on Flint’s southern border and the Center for Transportation Technology, which is located six miles away in the City of Flint.

“Flint is most certainly a hub of high quality and diverse post-secondary education options,” says Wen. “Each post-secondary institution fills an important niche in the community and two of the four major post-secondary, including Baker College, ranked in the Top 10 in a recent report on return on investment for students.” 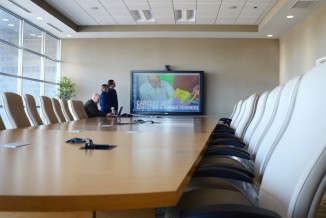 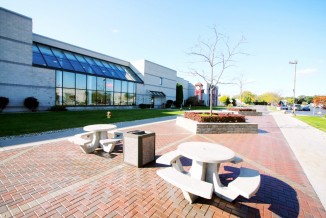 Though Baker College has grown and adapted to expand offerings that include bachelor’s, master’s and doctorate degrees, Wen says its mission has remained constant since it was founded in 1911. Baker remains dedicated to providing quality higher education and training that enable graduates to be successful throughout challenging and rewarding careers. The college also continues to be responsive to the community by providing training and education that is needed in the workforce by area employers. Over the years, the Baker College system has invested more than $750 million into post-secondary educational infrastructure, expanding its campuses to more than 1.3 million square feet of state-of-the-art classrooms and labs. “This has had tremendous positive economic and workforce impact in Michigan and Genesee County,” says Wen.

Baker College also plays a substantial role in the community and encourages its staff and students to give back. Senior students often choose to assist not-for-profit organizations for their capstone projects. An example of how Baker makes a difference in its community is the assistance provided to help grow St. Luke N.E.W. Life Enterprises, an initiative to train unemployed Flint women to become self-sufficient providers for their families. Students and faculty devoted nearly 2,500 hours to support N.E.W. Life’s business of garment-making for the health care industry. “Relationships exist at every level of our organization that support the great work of our community partners,” Wen says. These include support for the Food Bank of Eastern Michigan, the Flint & Genesee Chamber of Commerce, the Humane Society of Genesee County, the Greater Flint Health Coalition and United Way of Genesee County. Baker College students and faculty raise funds for the American Cancer Society, American Heart Association and many other worthy causes.

Additionally, Baker makes its facilities available for community use for a variety of events.

What are some of the future plans? According to Wen, providing cost-efficient ways for high school students to get a jump-start on college is a top priority. Baker has expanded relationships with high schools by offering dual enrollment and direct-credit courses for students who are ready for college curriculum. Baker College of Flint has recently partnered with two school districts to provide early/middle college opportunities to students and is also investing resources in high-demand career programs such as welding, advanced manufacturing, engineering and nursing, to help meet employers’ needs.

My City Magazine will conclude the College Town series next month with a look at the impact of these and other institutions on Flint’s economy.