Is the once thriving Vehicle City becoming a booming town recognized for its top-notch colleges and universities? Students can often be seen bustling around Downtown Flint, eating at local restaurants, and talking with their friends at coffee shops and their favorite hangouts. With the ever-growing presence of the young and ambitious college crowd, what effect does the increasing number of students have on our economy? How involved are the educational institutions in our community? In a three-part series, My City Magazine will examine this trend and look at just how colleges are affecting the revitalization of the Greater Flint area.

A “college town” or “university town” is defined as a community dominated by its university population. The university may be large, or there may be several smaller institutions, but college towns in all cases are so dubbed because the presence of the educational institution or institutions pervades economic and social life. Many local residents may be employed by the university and many businesses may cater primarily to the university. In addition, colleges can provide diverse opportunities for area citizens to see college sports games as well as arts and cultural events that are developed by college students and faculty for the public’s enjoyment. 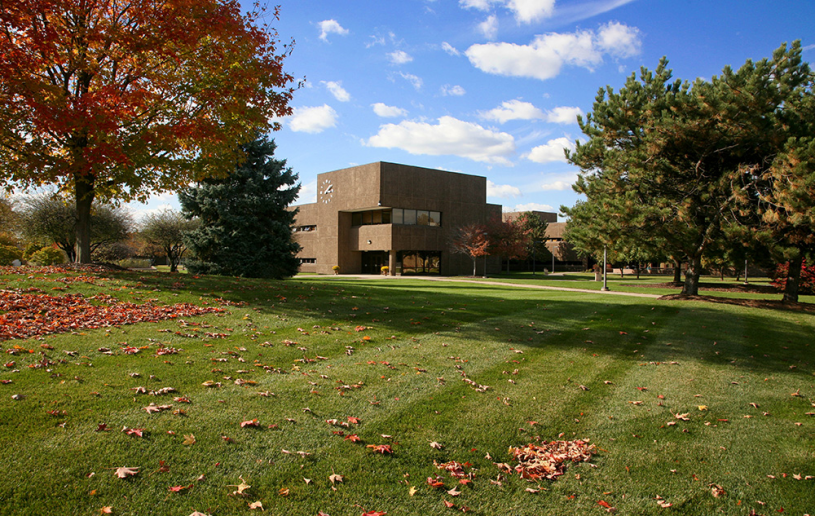 MCC has grown over the years, beginning as Flint Junior College in 1923 and originally housed in Central High School. It offered six programs of study, all designed to transfer to a four-year college. The current Flint campus was founded in the late 1950s and early 1960s as part of a master plan that included the Flint Cultural Center. Charles Stewart Mott donated the land on which the campus sits, and the Ballenger Field House and Harlow Curtice building were the first two structures built on the new campus. Since then, Mott College has grown to include 107 acres of land, 15 Flint campus buildings, seven satellite locations, and more than one million square feet of educational space. It has grown academically as well, from six study programs to now include four Transfer Associate Degrees, 42 Occupational Associate Degree Programs and 49 Professional Certificate Programs. 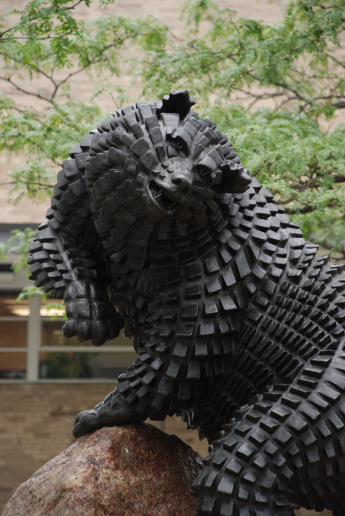 “I think the college town culture is still developing,” says Dawn Hibbard, speaking on behalf of MCC, “but we’re getting there!” She believes colleges and universities have achieved a much higher profile in Flint in the past few years, not only as the avenue to prepare for the new economy, but also as key players in the local economy as employers and economic drivers.

According to Dawn, approximately 1,600 students were eligible to graduate in May this year, with more than 500 walking at the May Commencement. The number of students in the Fall 2014 enrollment was 8,937. The number fluctuates with the economy, she reports, but on average, enrollment at Mott is within the 8,000-10,000 range. The college employs 900 full and part-time employees in Flint. “MCC continues to expand its educational opportunities,” Dawn reports. “MCC faculty and administration are constantly analyzing market demands and creating new curriculum and degree programs to prepare students for the new economy.” 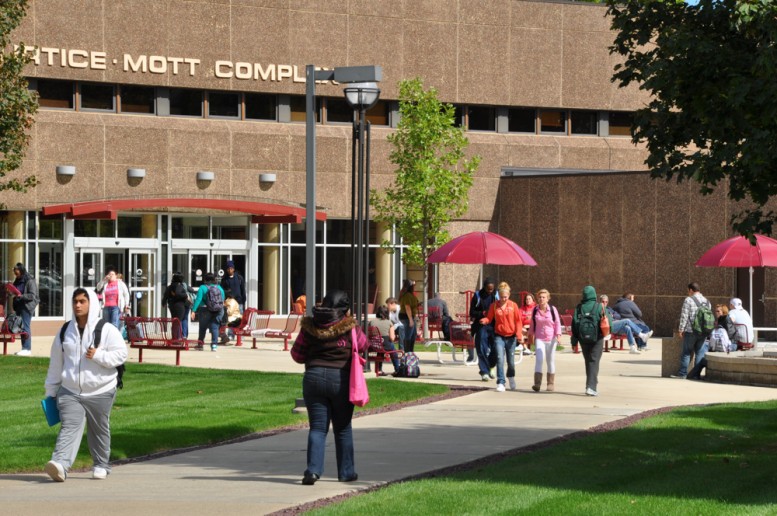 “Our campus is open to the community as a public space and we invite the community onto our campus for many college-sponsored events.”
Dawn Hibbard, MCC

As a community college, MCC plays a vibrant role in the community. “Community IS our middle name!” exclaims Dawn. “Our campus is open to the community as a public space and we invite the community onto our campus for many college-sponsored events.” The Mott College Library is open to the public and hosts seven voting precincts for the City of Flint. The College sponsors three Community Technology Centers designed to bridge the technology divide through computer training and educational opportunities. MCC hosts the College/Cultural Neighborhood Association and Neighborhood Watch meetings on campus and offers several programs through Workforce Development.

According to Dawn, service learning is built into many of MCC’s academic programs. Accounting students offer free tax preparation help to the community annually, Honors Program students perform free anti-bullying programs at elementary schools around the state, business students initiated a crayon and coloring book drive for Old Newsboys as part of a class project, and student clubs donate hours of community service as part of their funding requirements. The college sponsors or opens many of its programs and events to the public and collaborates on many community projects.

What are some of Mott’s future plans? Dawn reports that MCC has been selected as one of 12 community colleges to participate in the Michigan Guided Pathways Institute. The Michigan Guided Pathways Institute is part of a statewide and national initiative designed to get more community college students to graduate on time with fewer wasted classes. It will be particularly helpful for first generation college students, minority students, low-income students and those just simply overwhelmed by the choices colleges offer. Providing more support in exploring career options, the program will help students avoid taking classes that either won’t transfer or won’t count toward an occupational degree program. 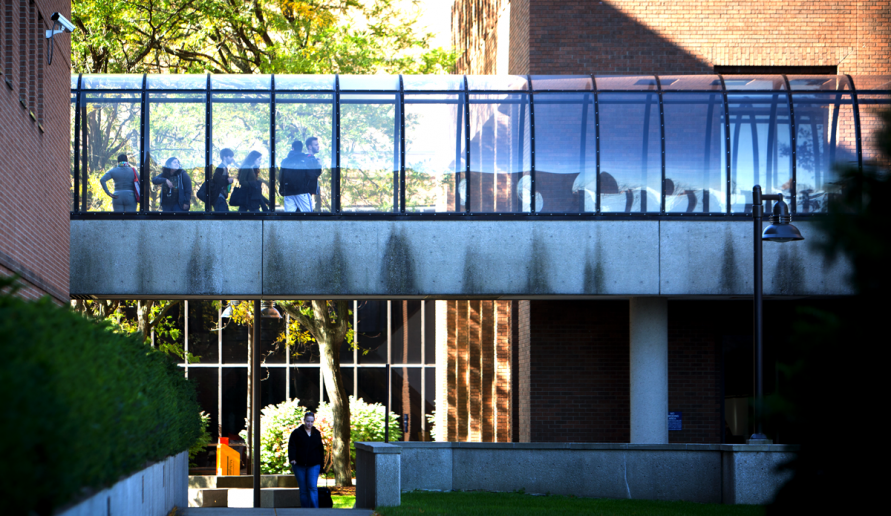 There is no question in the mind of UM-Flint Chancellor Susan Borrego that Flint is becoming a college town. “Flint is absolutely a college town!” she exclaims. Currently, the university has 30,000 students pursuing higher education. Is there more to be done? “Of course,” she says. “We have yet to reach our full potential of the high number of students in our community, but we are working to improve that. We are a community in transition and all the area colleges and universities can and should play a vital role in that transition to an even more vibrant and growing community.” And, the chancellor is determined to make the UM-Flint a leading partner in that effort. “We have so much good happening here and so much potential for more.”

The history of the university dates back to September 23, 1956, when students began their first day at Flint Senior College. Owing to the vision, generosity and guidance of community leaders in Flint and Ann Arbor, the school continued to evolve and adapt in accordance with the needs of the population. In 1970, the North Central Association of Colleges and Schools accredited what was then called Flint College. In 1971, it was named the University of Michigan-Flint and William E. Moran was appointed the first Chancellor. In the late 70s, the university began moving to property in the heart of Downtown Flint, building a riverfront campus of modern buildings for its growing student body. In 2006, the university celebrated 50 Years of Excellence. The university finally became a residential campus in 2008 when 300 students moved into the First Street Residence Hall.

“We are a community in transition and all the area colleges and universities can and should play a vital role in that transition to an even more vibrant and growing community.”
Susan Borrego, U of M-Flint

According to the Chancellor, more than 1,100 students graduated this school year – a record number for at least the third year in a row. “It’s always an honor to see our students graduate, fulfill their dreams and join the ‘leaders and best’ of our alumni,” says Susan. “We are proud to be the school of choice for so many people looking to further their careers and better their lives.” 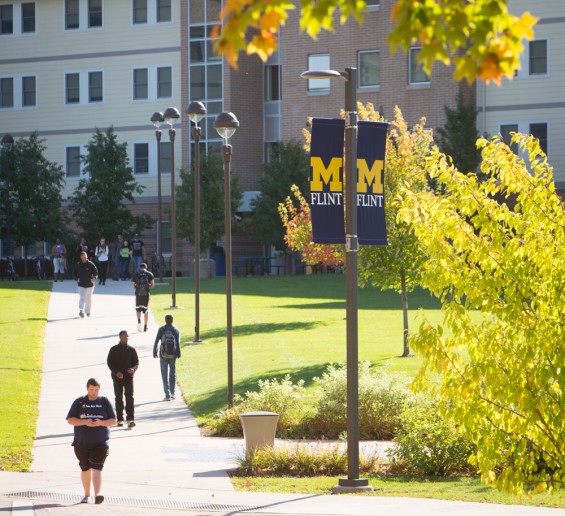 Enrollment now tops nearly 8,600 students – thanks to a 38 percent surge in student population over the last decade, Susan reports. “We’ve seen huge spikes in the number of graduate students as well as in the number of international students on campus. Student success remains the focus of what we are and what we do at the U of M-Flint.”

The university’s presence has grown substantially over the years through significant enrollment increases. They have added to the number of students living Downtown by building the First Street Residence Halls and partnered with the Riverfront Residence Hall to provide student housing. “This marks a fundamental shift for UM-Flint toward becoming a residential campus.” says Susan. “We also have created a more diverse campus by bringing more than 700 international students here and expanding the number of veteran students we serve. Along with our sheer size and investment in the community, we have been busily expanding our academic programs to offer the community even more educational opportunities.” 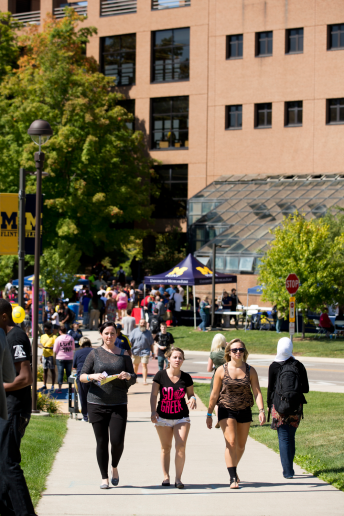 Chancellor Borrego says that everything the university does is designed to expand opportunities for both current and future students. The Chancellor’s Scholars Program provides full-ride scholarships to top students in Genesee County school districts. The Chancellor is committed to developing Flint Promise, similar to those in other Michigan cities, to keep the best and brightest of the young people in Flint to achieve an excellent UM-Flint degree. In 2007, the university partnered with the Genesee Intermediate School District to establish Genesee Early College on the UM-Flint campus. GEC is a five-year early college program that leads to a high school diploma as well as up to 60 college credits, free to the students and their parents. There are 200 students currently enrolled with close to 38 percent of its enrollees from Flint.

To allow for dual enrollment, the university collaborates with all Genesee County school districts as well as school districts across southeastern Michigan, allowing any high school student to take college classes and earn college credit for free.

The Office of Educational Opportunity Initiatives serves approximately 500 students at the pre-college level and 1,500 college students every year. The pre-college program provides tutoring and mentoring, college planning, college visits, assistance with financial aid application, and portfolio creation. There are two programs for college-level students – one that assists community college students in transferring to UM-Flint, and another program to help students achieve success. The Super Science Friday program provides a day of hands-on science learning on campus for 800 seventh- and eighth-graders. “It’s a hugely popular program among the students, teachers and administrators,” Susan says.

Both Mott Community College and UM-Flint continue to build upon their longstanding tradition of instructional excellence and their impressive level of community involvement right here in Flint. Part Two of our series will look at how Kettering University and Baker College have contributed to our city’s evolving college town environment.