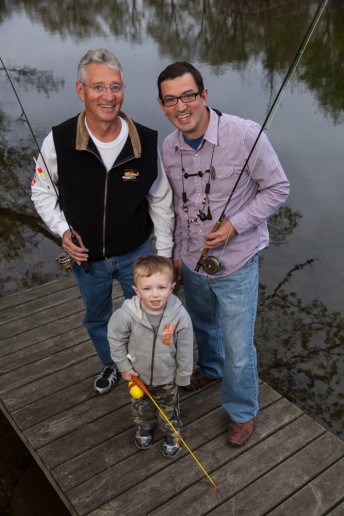 Brent Nickola of Lapeer and his father Dr. Paul Nickola of Linden have a few fishing stories to tell. The tales begin in Flushing, where Brent grew up and where Paul practiced optometry for 32 years. Their home had a pond nearby, which contained an assortment of fish, including one of a pair of catfish affectionately known as Big Mama swimming in its depths – and Big Mama was resilient. “We caught it for a decade or more,” says Brent. “It loved Koegel hotdogs!” Paul nods. “We always caught the same damn fish,” he laughs. “The bluegills were huge. We would throw them back because we just wanted to fish.”

Fishing together over the years since Brent was a small boy has created a special bond between father and son. One time when Brent was in high school, his friends came over to fish with him at the pond while his father was not at home. The Nickolas had several rods available for the boys to borrow, not to mention Paul’s smaller, prized Ultra-Lite rod. Someone had propped the Ultra-Lite on a lawn chair. “I remember standing on the dock,” says Brent. “I saw that bobber go down and saw the rod go right over. We got the chair out of the water, but the rod was gone.” For the next three days, he and his buddies tried everything they could to retrieve that rod from the bottom of the pond, to no avail. 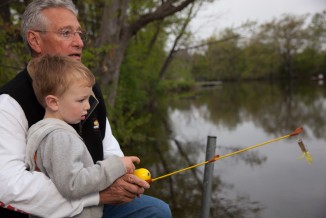 “I was looking for it, wondering where it was,” recalls Paul. “Brent finally told me what happened. It had been in the water for three days.” So they stretched some ski ropes across the width of the pond, tied heavy chains to the ropes and dredged the pond, finally reclaiming the sunken Ultra-Lite.

Paul remembers when Brent caught his first big, 20-pound salmon during a fishing trip in Ludington on Lake Michigan. Brent was 11 years old. “He’d open the cooler and slide his hand back and forth on that slimy fish,” Paul says. “He’d close the cooler; then he’d open it and touch it again. He couldn’t believe how big that fish was.” Both have many memories of fishing with friends in the Great Lakes and northern Ontario. In past years, Paul occasionally spent time fishing with his good friend Dave Richey, outdoors writer for the Detroit News. “I would sometimes cancel my patients’ appointments when he called to invite me to fish with him,” he admits, smiling. “One guy that I cancelled called me out on it later!” 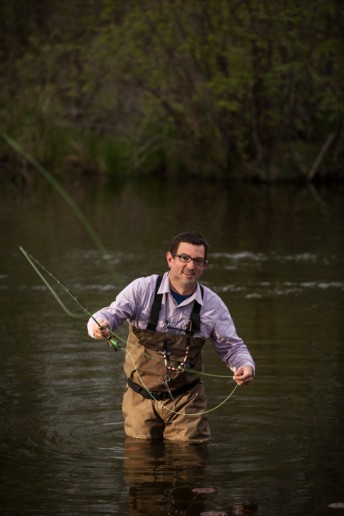 After finishing college, Brent and a friend went fishing together on the Au Sable River, renewing his excitement for the sport when he caught a beautiful brook trout that day. Soon he began wading and canoeing in local rivers and lakes. When he started catching small mouth bass on the Flint River, he was hooked. “I had a Panther Martin spinner and I cast behind a big boulder and hooked into a 16-inch small mouth bass in the Flint River!” he exclaims. “I couldn’t believe what a fishing resource we had right here.” Brent works for University of Michigan-Flint and has served on the board of the Flint River Watershed Coalition, leading guided fishing trips along the river – and for those wondering where his favorite fishing holes are along the river, he’s not about to tell you.

Anyone who likes to fish can strike up a conversation with a complete stranger, talking about fish and tackle like old friends. “Anglers can immediately bond with one another,” says Brent. He and his wife recently bought a home in Lapeer, choosing it mainly because there is a pond on the property, and they want their two young children, Aurora and Iser, to enjoy the water safely. Brent’s already continued the family tradition of teaching his kids to fish, taking them to the dam in Linden. “When it comes to kids, it’s all about the catching,” he says. 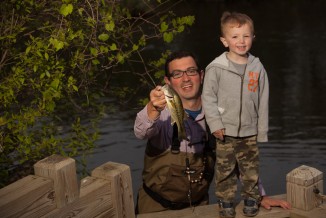 Brent and Paul will always find time to get out on the water and fish together. Paul suffered a stroke a little over a year ago. While it affected his speech and mobility and made controlling his emotions a challenge, he has made great strides in his recovery and continues to spend time outdoors with his son and grandchildren every chance he gets. “We often go fishing when the time is right for us, not when the time is right for fishing,” says Paul. “At any age, if you’re capable of getting out there, you can go and fish.”