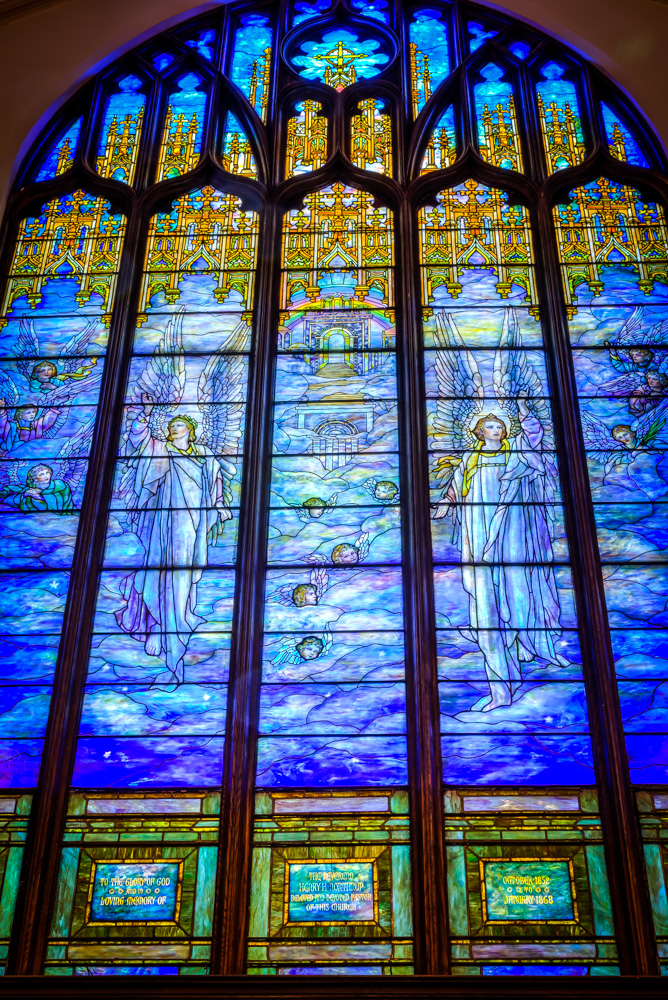 Located in the heart of Downtown Flint the First Presbyterian Church of Flint is and always will be a downtown church. The church is as well-known for its community service and its music as it is known for its preaching of Scripture from the pulpit. Its rich history stretches back more than 175 years, interwoven with America’s history, it has stood the test of time through the Civil War, two world wars, 38 presidents and two assassinations, the first man on the moon, and the birth of General Motors.

The church, originally First Congregational Church, was organized in 1837 (before Flint was incorporated) and located at the River House – the home of Lewis Buckingham, who had become Genesee County’s first sheriff that same year. Jonathan Beach, who was 75 years old, led the pioneers in signing their names to the Charter. Beach had been an aide to General George Washington.

The first edifice was constructed in 1837, on the corner of S. Saginaw and First Streets. The first pastor was Reverend John Dudley. At that time, the church family adopted a new form of government and the Congregational Church was re-organized in 1841 to become the First Presbyterian Church of Flint. The second building was located at the corner of S. Saginaw and Second Streets and dedicated in 1848. The current church building was dedicated in 1885, and a new church house was erected and dedicated in May 1929. 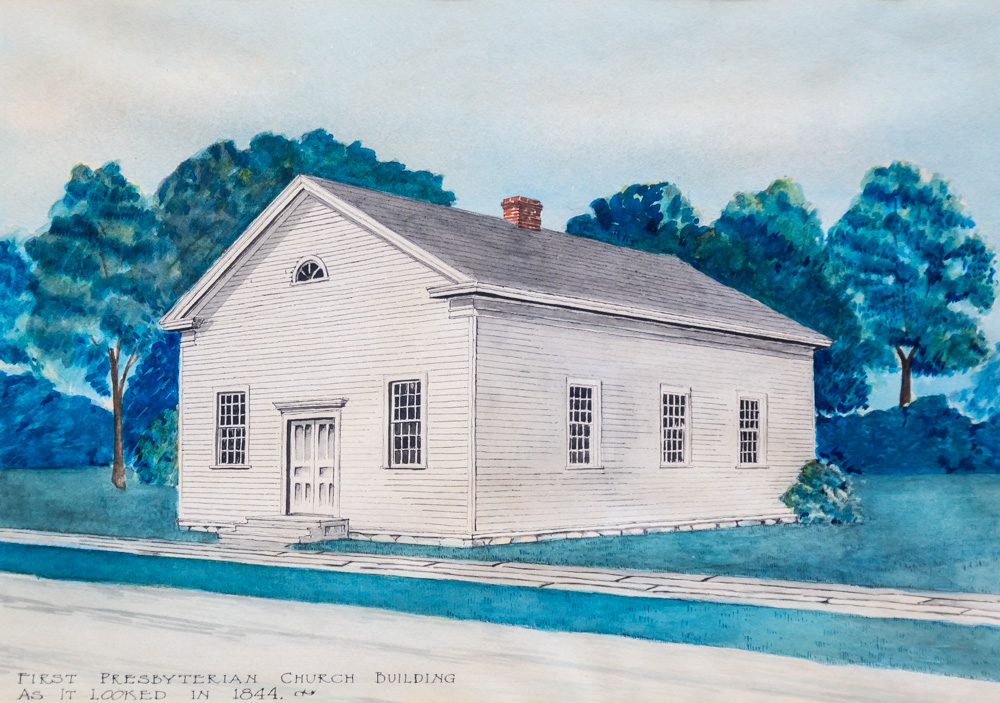 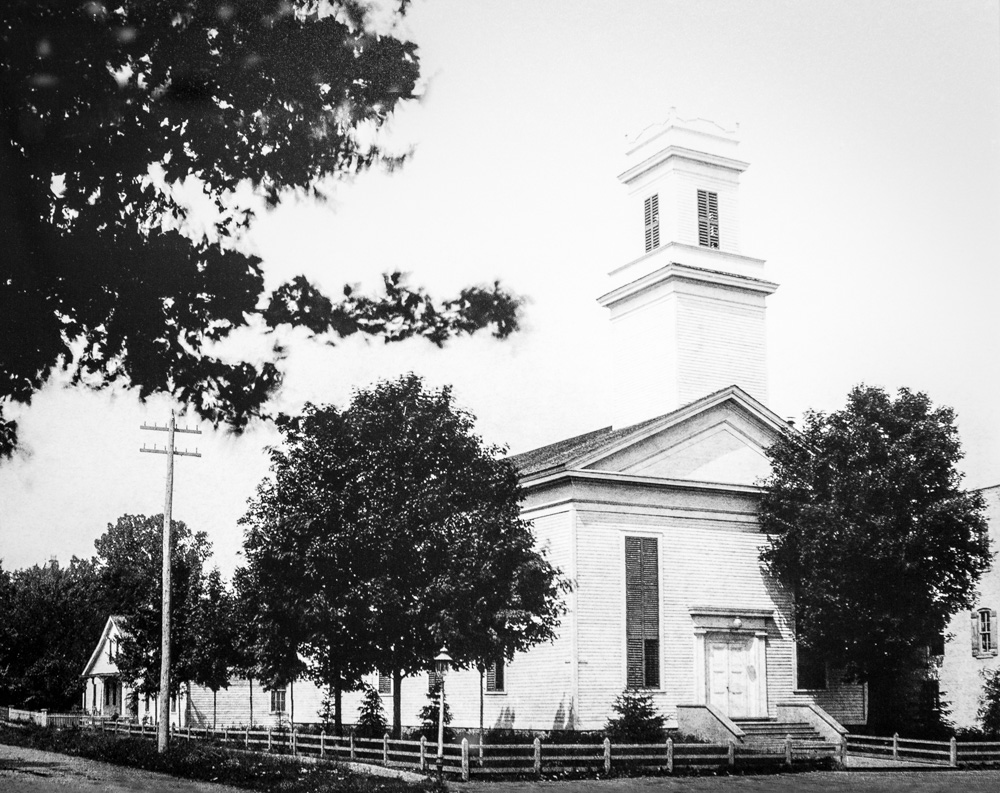 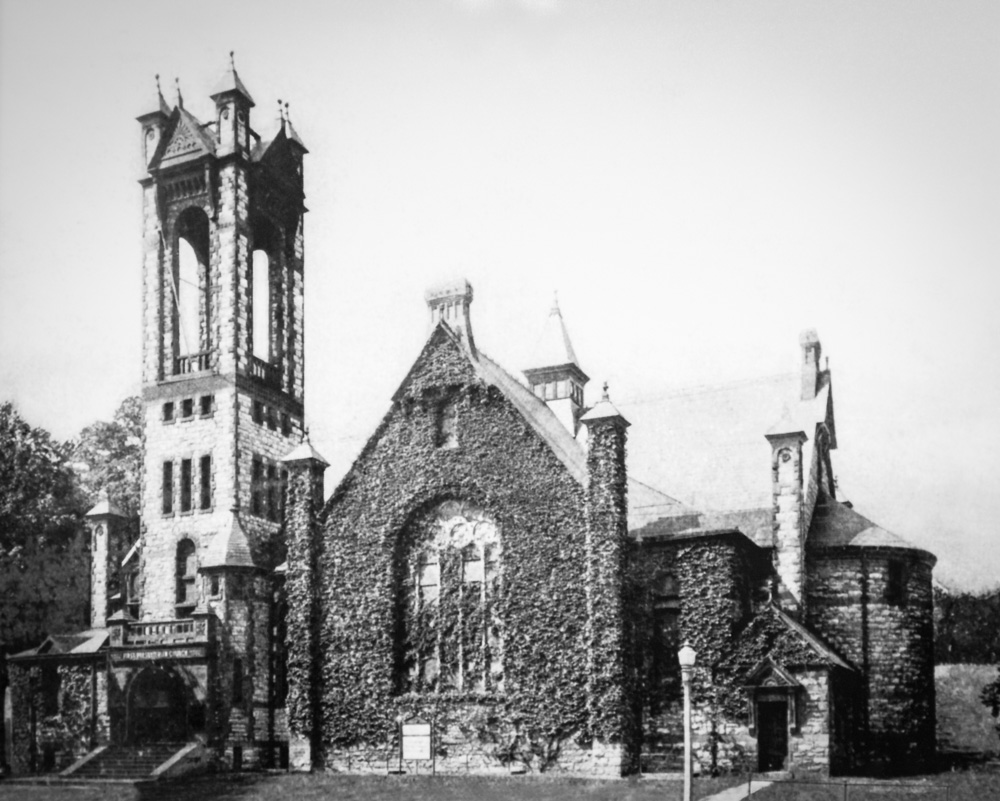 Reverend Henry H. Northrup was the pastor in 1852, paid a salary of $600. During his 25-year pastorate, 357 persons became new members. Northrup was a chaplain to the 13th Michigan Infantry during the Civil War.

The dedication of Glenwood Cemetery was held at First Presbyterian in October 1857. In 1872, Reverend David R. Eddy became the pastor. Disaster struck in 1875,when a fire of suspicious origin damaged the church building. There had been other fires which were blamed on temperance, as some historic church members were outspoken in their condemnation of drinking.

Steve Hill has been the church librarian since 1985 and is also working as the archivist, preserving artifacts, documents and newspaper clippings. He shared some interesting facts about the church’s history with My City Magazine.

In 1949, 33-year-old David Molyneaux began his 31 years as pastor, doubling the congregation under his pastorate. When he was honored for three decades of service, it was noted in the church bulletin: “Since he came to the pulpit in 1948 as a fiery young preacher, our Senior Pastor’s enthusiasm and leadership have built the congregation into one of the largest and most active in the denomination.” 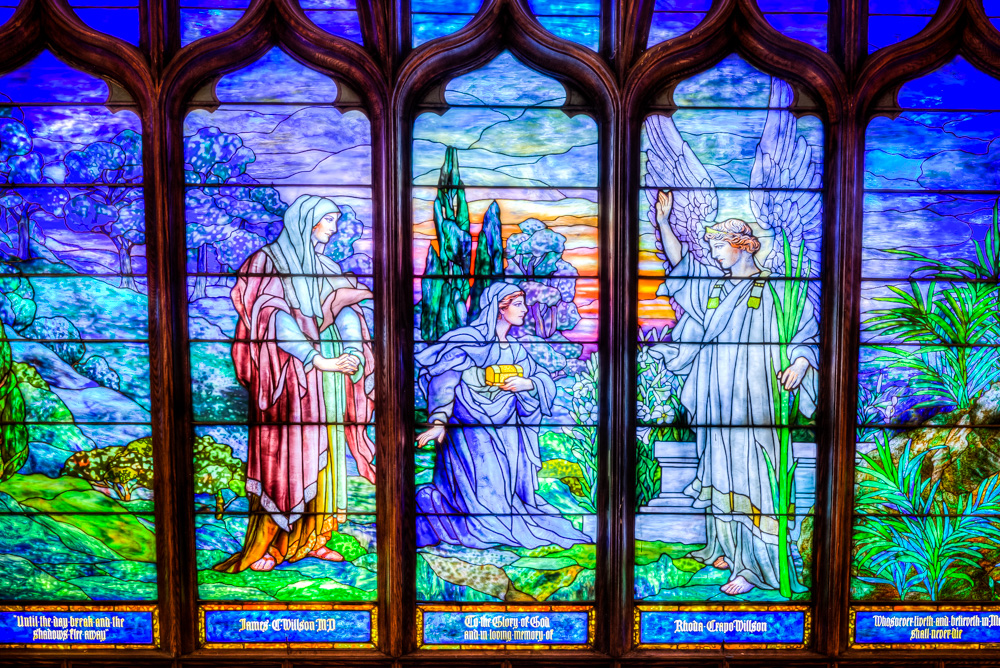 A huge Sesquicentennial Celebration of the church was held in 1987, and a commemorative book, A Sesquicentennial History, written by Alice Lethbridge, details the church’s rich history. Hill also notes that one current church member, Harriet Lay, had family members who were original charter members of the church; Michigan Governor Josiah Begole was Lay’s great grandfather.

Another notable time Hill recalls occurred in the 1980s when the church launched a vision team to determine the church’s future direction. The church was at a low point, and they had considered perhaps moving from Downtown Flint to Flint Township. 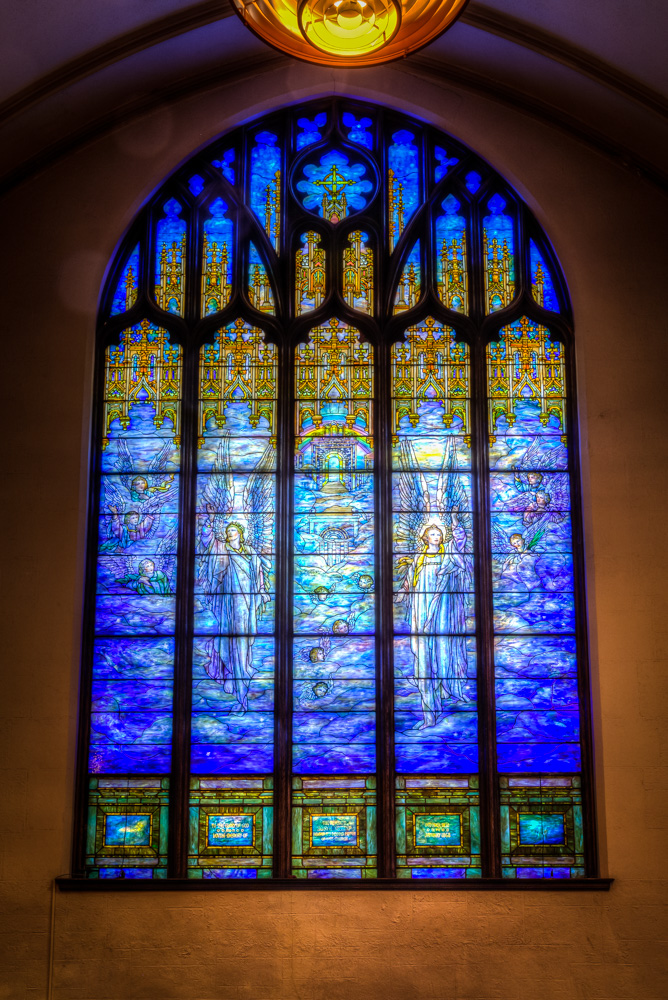 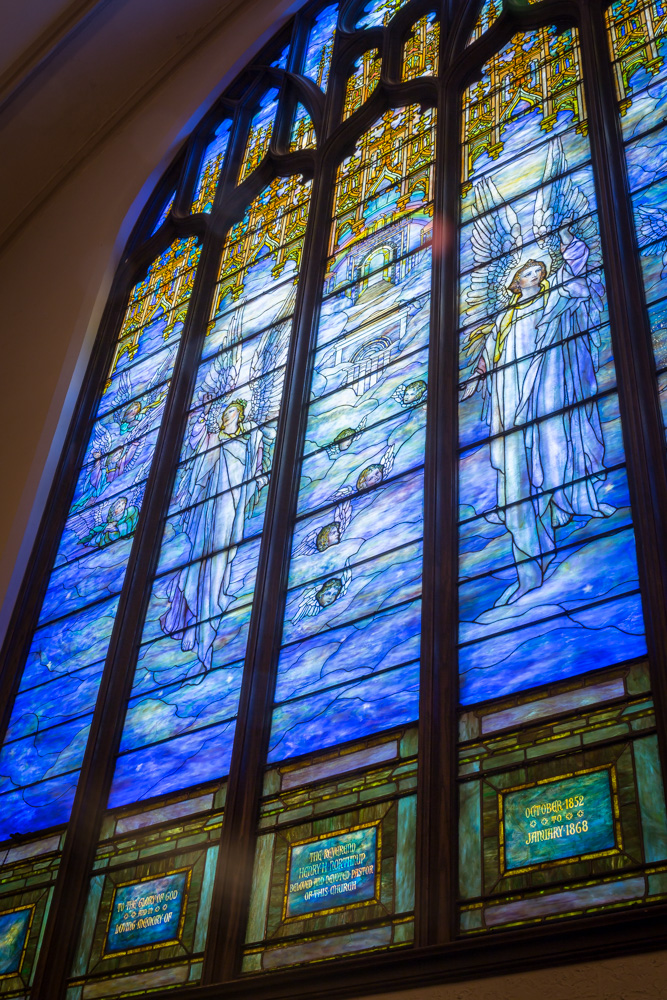 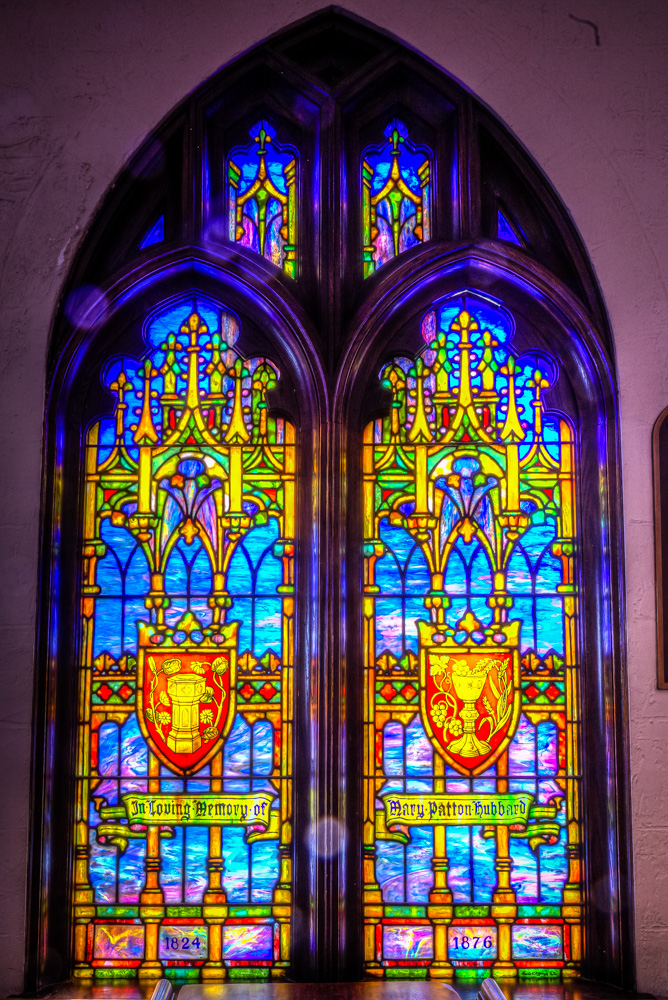 “The vision team decided not to relocate,” Hill recalls. “The easy choice would have been to leave, but we were committed to being a downtown church and God was telling us to stay say here.” It was around that time when some updates were added: a chapel, an office complex, and the Gerholz Christian Counseling Center, which is still open today. So, altogether, the church has seen three moves and two major additions, now occupying a whole city block – and it’s truly a sight to behold. The church is also known for its beautiful stained-glass windows.

Having welcomed and bid farewell to a number of retiring pastors, Reverend Dr. John Musgrave most recently, the church decided to call a younger pastor in 2016. The Reverend Dr. Joseph Novak, 33, who grew up in Flint’s Mott Park Neighborhood and attended Doyle Ryder Elementary School and Longfellow Middle School, was called in May to serve as the 23rd Senior Pastor and Head Staff. A graduate of Cornerstone University in Grand Rapids and Fuller Theological Seminary in Los Angeles, CA, Novak was previously pastor at the First Presbyterian Church in Ithaca. He and his wife, Katie, have three children: Eli, 6; Calvin, 4; and Oliver, 2.

“It’s exciting to be back in Flint!” Reverend Musgrave exclaims.

First Presbyterian of the Present 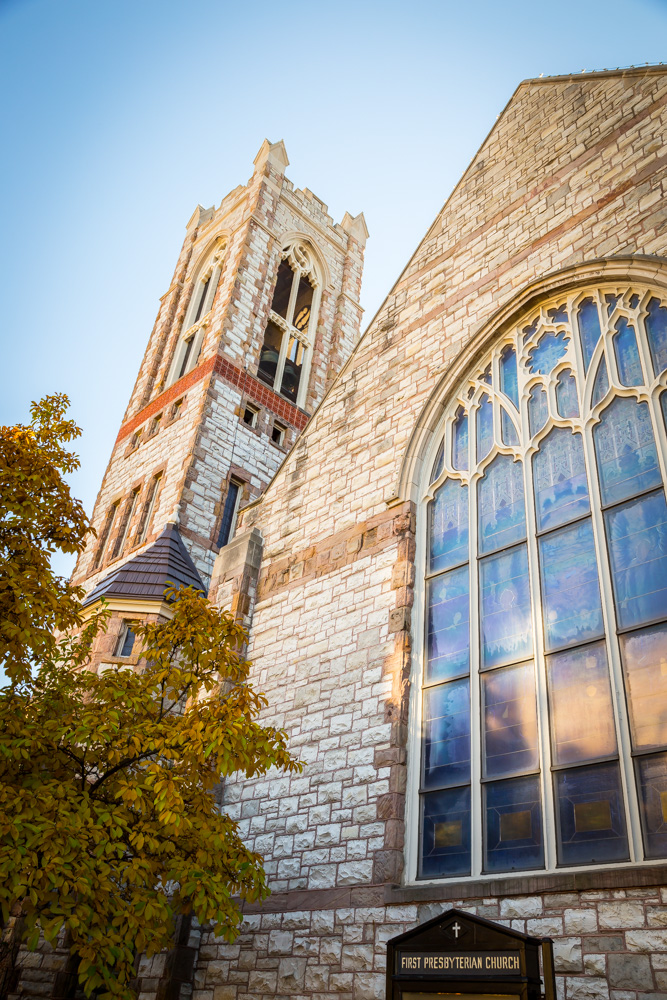 There are currently some exciting things going on at First Presbyterian Church, according to Reverend Paul Ytterock, Associate Pastor. The church is led by elders and is part of Presbyterian Church (U.S.A.), the largest such denomination in the United States.

The congregation is growing more diverse, according to Novak. “When we gather on Sundays, we gather as old and young, families and single folks, rich and poor, black and white – all coming to hear the Scriptures and to give thanks and praise to God – and that is exciting,” he says. “You can feel the Spirit’s energy in here on Sunday mornings.”

The most important aspect, Novak says, is that First Presbyterian is committed to being a downtown church. “We want to be connected to our community. Our doors open to anyone searching for God in their life,” he adds. In addition to Sunday worship, the Church runs the Gerholz Counseling Center, meeting the community’s mental health needs with holistic care – free of charge. The church is also the only place in the County offering free assistance to people who need their vital records. Novak sums up the mission of the church by saying, “We are a cheerleader of the downtrodden.” 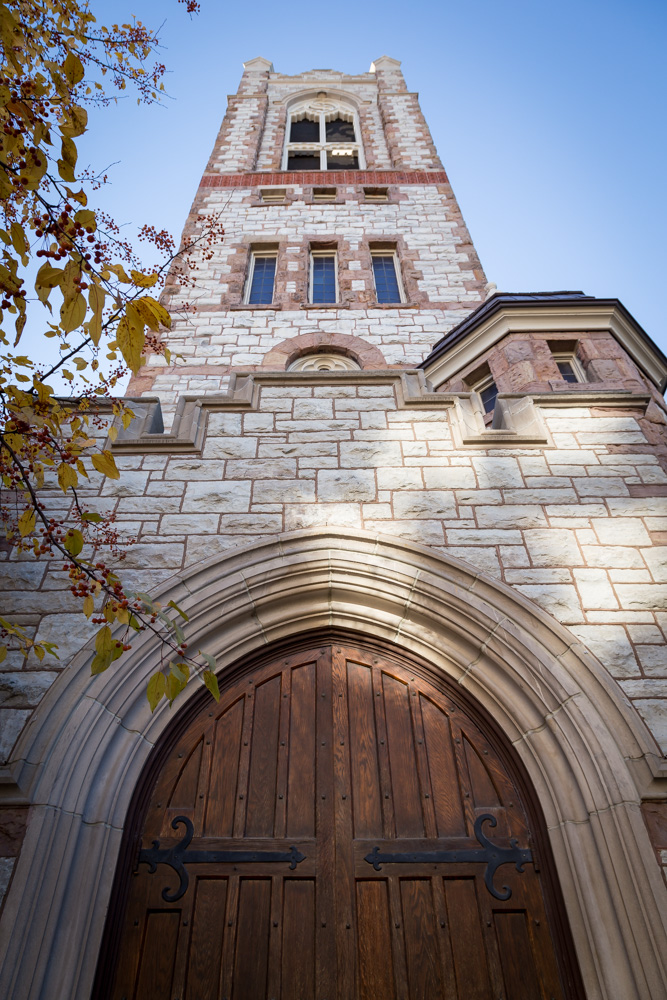 What does the future hold for First Presbyterian? A new vision task force is looking at what the church will be like for the next 15 years, according to the pastor, and church members are part of the process. The preaching of the Word has been and will continue to be the backbone of the First Presbyterian Church of Flint.

“One surprising thing about the God we Christians worship is that God chooses to make himself known to others through wounded people like us,” Novak says. “This is certainly true for our work as a downtown church. The work we are doing may start off mundane, only to suddenly become extraordinary. This is exciting to me, and it is what God is doing at this church.”