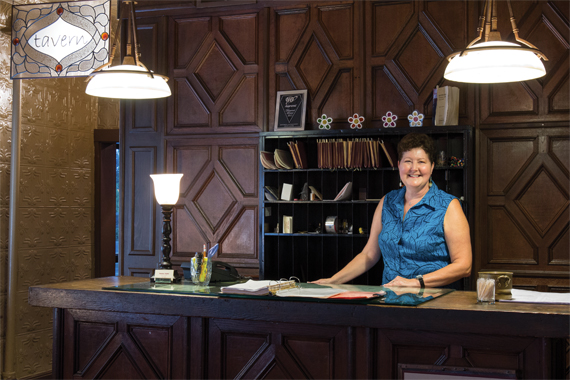 October is the perfect time of year to take a short drive south of Flint to the city of Fenton. The leaves of the numerous majestic Oak and Maple trees that line many of the city’s streets are in full color, deep red, rusty orange and brilliant yellow. One can’t-miss stop is The Fenton Hotel Tavern & Grille, which has been a landmark and a cornerstone of the city since 1856.

Known for elegant dinners served on tables dressed in crisp white linen, the Fenton Hotel Tavern & Grille also offers a casual dining atmosphere and a menu chock full of down-home comfort foods, including lobster mac and cheese and gourmet meatloaf. The sleek mahogany bar rumored to have been built right after Prohibition is a visitor’s first sight upon entering the 157-year-old building. Patrons find an extensive wine menu, as well as eight draft handles, many of which are Michigan brews. A variety of specialty cocktails are available, including a Pumpkin Pie Martini to help celebrate the season, made by Joe Shafer, Head Bartender.

Nick and Peggy Sorise have owned the restaurant since 1997. Nick says while customers appreciate fine dining especially around the holiday season, the casual ambiance draws large crowds who enjoy a beverage and a bite to eat at the bar. Entertainment is provided four nights a week.” The piano bar is quite popular, says Nick. “Patrons linger around the piano and request their favorite songs.”

A popular menu item is the Hotel Fish Market, says Nick. Four to six varieties of fresh fish are offered and the diner has six different preparation options: sautéed, charbroiled, blackened, pan seared, cedar planked or pecan crusted. “The fried lake perch is our biggest seller!” Nick exclaimed. Another popular entrée that has been on the menu since the beginning is Frog legs, made from Elsie Browsier’s original recipe, fried golden and served with drawn butter. The delectable dishes are prepared by long-time Chef Roger Thronberry, who once worked under the renowned Chef Milos at the London Chop House in Detroit. He specializes in classic fare such as braised short ribs and Steak Diane. The menu changes on a daily basis, which keeps it fresh and offers diners something new every day. Other favorites include the LeRoy Street Salad – mixed greens, pine nuts, dried cherries, bleu cheese, red onions and poppy seed dressing – and Shellfish Bisque, a delightful creamed soup made with lobster, crab, shrimp and clams.

A historical place like The Fenton Hotel Tavern & Grille claims many longtime employees. “You are only as good as the people around you and we have a great staff,” boasts Nick of his 30-member crew. Brittany Lockwood is the manager and Margaret Perry has been the hostess for ten years. “She knows our customers,” says Nick, “and being in a small town, that is important.” Nick’s wife, Peggy, plays a major role in operating the business. “She’s my partner,” he smiled.

As for dessert, sweet endings are prepared by Pastry Chef Linda Hargreaves. A tempting tray displays five to six scrumptious homemade desserts, including a variety of cheesecake, pie and tapioca pudding. For the month of October, a decadent Pumpkin Cheesecake is on the menu.

It’s been rumored for many years that the Fenton Hotel is home to a few ghosts. “It’s more than a rumor,” laughed Nick, who was not always a believer. “My opinion changed shortly after taking over the building; strange things have happened here,” he says. Glasses have been known to fly off the glass rack with no explanation, and more than one patron has been spooked in the ladies room, reporting there is something “very strange about the third stall.” And then of course, there is the ghostly patron who orders a Jack Daniels (at a certain table), only to disappear when the server brings the drink order. But don’t let that scare you away. Take that drive out to Fenton on an autumn day. Enjoy the fall colors and the rich history at Fenton Hotel Tavern & Grille – and perhaps a Pumpkin Pie Martini at the piano bar!

Are you interested in purchasing photos from this story? Go HERE and select the “Fenton Hotel” category.