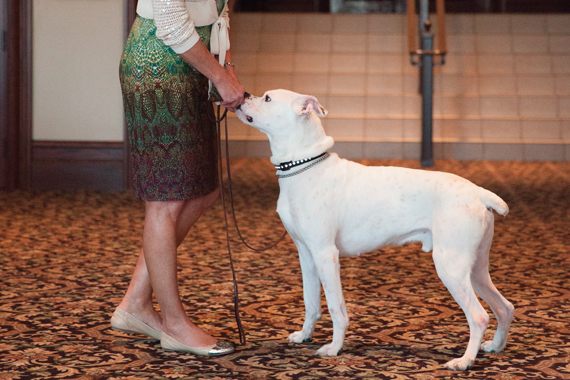 On April 8, friends and supporters of the Humane Society of Genesee County gathered at Warwick Hills Golf and Country Club for the 16th annual Paws on Parade Champagne Brunch and Charity Auction. Sold-out attendance confirms that the event is one of the Humane Society’s biggest fundraisers. In addition to over 70 items donated for a silent auction, a live auction included a Warwick Hills Golf Package, trips to the Detroit Grand Prix and the Marriott Vacation Club in Fort Lauderdale FL, two round-trip airline tickets and a “Ladies Day Out” Spa Experience.

The theme for the event was Everyday Heroes. By actual definition, heroes are individuals who consistently and continually sacrifice their own needs in the interest of others. Some would describe an everyday hero as an ordinary person who does extraordinary things. Walt Rodabaugh, Humane Society Cruelty Investigator, was recognized as an everyday hero. Winter was brutal this year for all of us, but even harder for neglected animals and the Humane Society received call after call about pets that were left outside in sub-zero weather, with frozen water and no food. Walt has been rescuing animals from the harshest conditions for 40 years, many of those years with Genesee County Animal Control. At times, he found himself in highly charged situations. “People’s animals are important to them,” says Walt. “They tell me, ‘You can take my car, my house, my wife or kids, but don’t touch my dog.’” But rescuing an animal is a reward in itself for Walt. “The most rewarding thing is removing them from a bad situation and then seeing them be adopted,” says Walt. “I’m here for the animals. Someone has to speak for them. That’s what I’ve done for 40 years.”

Also recognized at the event were the individuals who call the Humane Society to report suspected animal abuse or neglect. It takes even more courage for someone to actually intervene and bring an animal into the shelter, says Terry Ashley, Project Manager. A lot of people are afraid to report because they don’t want to get involved, but reports can be made anonymously.

This year’s special guest at Paws on Parade was a beautiful, white boxer mix named Rocky, brought to the Humane Society by an Everyday Hero. When Rocky arrived at the shelter, he was described as “skin over a skeleton,” and weighed just 30 pounds. “I don’t think I’d ever seen a dog so thin,” Terry remembers. “One look at him took your breath away.” Despite his condition, Rocky was a loving and good natured dog and eager to learn new tricks. Terry documented his progress on a video, which brought many attendees to tears when shown during the fundraiser. Within six weeks, Rocky gained 30 pounds and was ready for adoption. Accompanied fittingly by the theme from “Rocky,” the healthy boy made his grand entrance at Paws on Parade by jumping up on a table where he “strutted his stuff,” laughed Terry. “Rocky’s story, like so many others, fits perfectly with our mission,” said Dawn Johnson, Executive Director, “to provide shelter and adoption of companion animals, reduce pet overpopulation, prevent cruelty and extend humane education. Rocky is a perfect example of why we are all here.”

See more photos HERE, or purchase photos from this story by going HERE and selecting the “Paws on Parade” category.