“I want people who don’t get it, to get it. I’m trying to show every side of Flint.”

It is a great feat to be happy while dodging life’s crazy punches; this is something that we all have in common. 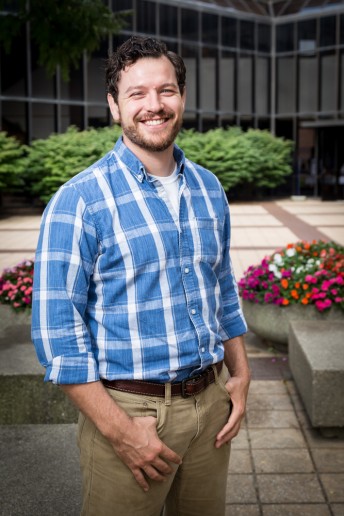 Scott Atkinson, a writer and professor at UM-Flint, is one of those people who are happy anyway. He, along with about 20 other Flintoids, are all happy enduring what life – and Flint – has decided to throw at them.

Although not a Flint native, Atkinson hails from Durand, MI and fell in love with Flint many years ago, regardless of what the national opinion seemed to be. He began hanging out in Flint when he was 17 years old. While going to college, he started writing for the Uncommon Sense newspaper and eventually became the assistant editor. At the age of 20, he was in journalism school and fascinated with the different types of reporting he was able to do.

“They turned me loose in the city, and I was sort of falling in love with it,” he says. “It gave me a chance to explore. It’s hard to explain to others, but Flint is a city that is easy to fall in love with.”

And of his recently-released book, Happy Anyway: A Flint Anthology, Atkinson found joy through reading other perspectives on the city and editing it in a way that showed the city’s perfect nuances. “It meant a lot to me to be able to put this project together,” he says. “I’m used to writing about other people who do stuff like this.”

Atkinson started writing for Belt Magazine in the summer of 2015, and already knew that Belt Publishing compiled anthologies about different cities.

“I immediately thought if they have these anthologies about other Rust Belt cities, then there should be one about Flint,” he says. He e-mailed the publisher and pitched his idea. And they accepted it.

In the fall of 2015, Atkinson put out a call for submissions, soliciting articles from a few writers he knew personally, but also wanting to branch out of the Downtown scene and hear new voices.

“I didn’t want it to be the ‘Downtown Anthology,’” he explains. “I wanted the call of submissions to go beyond those who would read it on my Facebook page. I knew there were certain things I wanted in the book, and a certain level of diversity. I wanted to make sure we were reaching all aspects of the city.”

Atkinson speaks of his friend, Eric Woodyard, who submitted an essay about the murder of his best friend. “He mentioned in passing one day that there are two Flints,” Atkinson says. “He grew up on the North side and how different that life was from Downtown. It’s a very different world and they’re only a handful of blocks away. I asked him to write a story about that, but it ended up being more about the murder of his best friend. It’s a very honest, very frank story. That was what I hoped for; but as an editor, I didn’t really have any control over what came in.”

The submissions trickled in, and Atkinson read them whenever and wherever he could. With some, he knew right away that he wanted them. Some had potential, and even received direction and notes from him to go through several drafts before they were final.

“As a writer, it was really great for me to have the editing experience from the other side,” he admits. “I liked sharing a vision with a writer and being the person to coach the writer toward what the story needed to be.”

Layla Meillier, who is 18, was one of the youngest people he asked to submit a piece. “I knew she liked to write, and I knew I wanted young voices,” Atkinson says, adding that what confirmed his choice to include Layla’s chapter was what she said about Flint: “Flint is an easy city to grow up in,” meaning that you can’t help but become an adult here. She submitted two chapters, and he accepted both.

Many locals who enjoy reading about Flint may already be familiar with other literature; books like Gordon Young’s Teardown: Memoirs of a Vanishing City, and Andrew Highsmith’s Demolition Means Progress offer a lot of history, background, and one unique perspective. Atkinson, although he admires what those authors have done, wanted to try something different, and give the locals a voice. 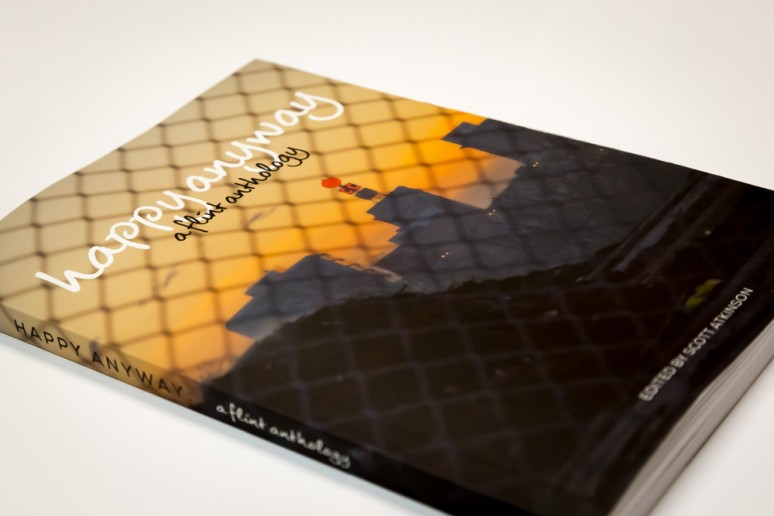 “An anthology is a chance to include a lot of stuff that is unified by the subject of Flint and nothing else,” Atkinson says. “I like that the book has very different stories about Flint, offered side by side.”

In light of recent issues, he believes the timing for publishing the book was very beneficial. “Flint gets so much attention and it’s often boiled down to one or two sentences that are accurate, and yet very limited,” he says. “If all this attention gets people really interested, here is a book that can show you just how complicated and nuanced the city really is. I’m trying to show every side of Flint.”
For those who enjoy the stories for what they are, locals are the perfect audience. But for those who want a reality check, or a chance to change their perspective of Flint, Atkinson wants an audience of outsiders. “I want people who don’t get it, to get it,” he states. “If you want to be the person at the cocktail party who knows what they’re talking about when Flint comes up, I think this a book that people should read.”