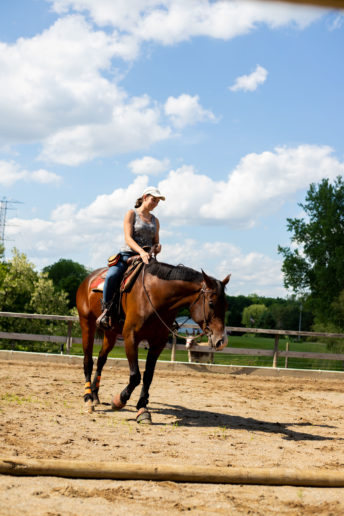 It was a gorgeous, late spring day when My City visited Equine Escape, Inc. in Goodrich. Andy, a red gelding, two sorrels, Nellie and Classy, and Maybeline, a white beauty, were romping in the pasture as Gretel, a big beautiful Belgian lazily munched on the grass. In the barn, which houses the organization’s indoor arena, there were three darling mini-horses, Roman, Merlin and Rory, basking in any attention they could get and nudging at our hands looking for treats.
A few miles down the road, the outdoor arena and 12 acres of riding trails were just as scenic. Two mini-mules, Bugsy and Pablo, were sparring like teen-aged boys and Pedro, a mini-donkey, was loudly braying for attention. Marshmallow, one of Michigan’s top barrel racing ponies, was getting saddled up, while Woody and Ima (two favorite horses) watched from the barn. This is a place where magic happens – where at-risk youths and military veterans suffering from anxiety, depression, PTSD and more, come to heal. And, the horses are the healers. 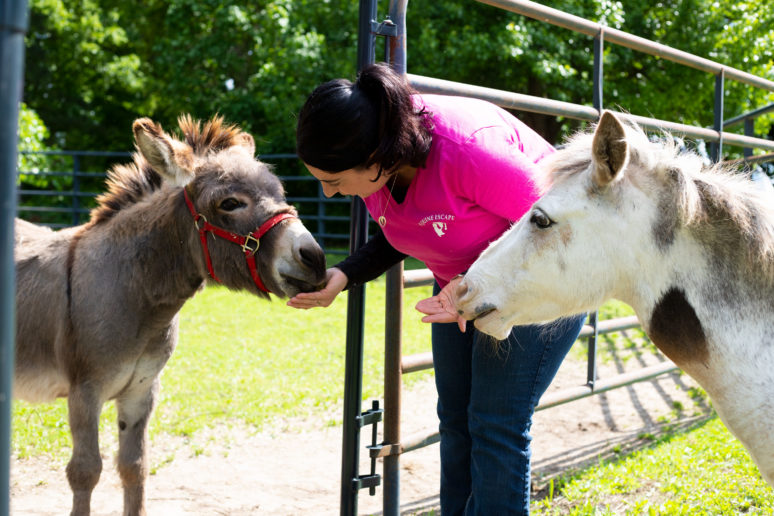 Ted and Rachael Gilmour are the founders of Equine Escape, an equine-assisted learning and equine psychotherapy facility. Their mission is “to provide our community with additional resources for ‘at risk’ youth and veterans as they face life’s challenges.” According to Rachael, by partnering horses with participants, certified facilitators and utilizing specific exercises, Equine Escape provides the opportunity for participants to develop a “toolbox” of sustainable skills.
And Rachael knows first-hand how a horse can help a person heal. “It’s a weird journey, how I got here,” she shares. Rachael grew up in Goodrich, living with her parents across the road from a horse farm. She spent every day at the farm and eventually, got her own horse. Then, her parents divorced and her mom married a man who was an abusive alcoholic. To get away from him, Rachael ran away when she was 14 years old and lived with a friend on Flint’s Northeast side. Her mom couldn’t get away from her husband; but when she finally did, Rachael and her mom moved to Grand Blanc where Rachael was labeled “a stoner” at Grand Blanc High School and got herself into all kinds of trouble. 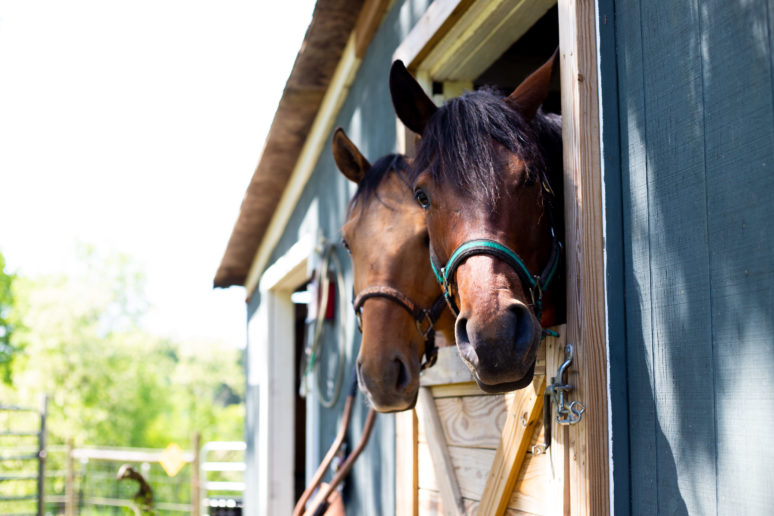 One teacher, however, took an interest in Rachael and saw her potential. “He was the adult who decided I was worth something,” she remembers. Her mom somehow managed to hold on to Rachael’s horse, working two jobs to do so. “My horse was my lifeline,” Rachael remembers. Ironically, the horse was kept in the barn that now houses Equine Escape’s indoor arena. “That was the place where I could be me,” she says. “I didn’t have to be the tough girl.”
Rachael turned her life around, married, and continued her education. After she graduated from Michigan State University’s Horse Program, her vision was to help inner-city kids. “I wanted to create a refuge from all the stress and challenges they face, where they could feel emotionally safe. I knew what horses had done for me,” she remembers. But her dream was put on hold. 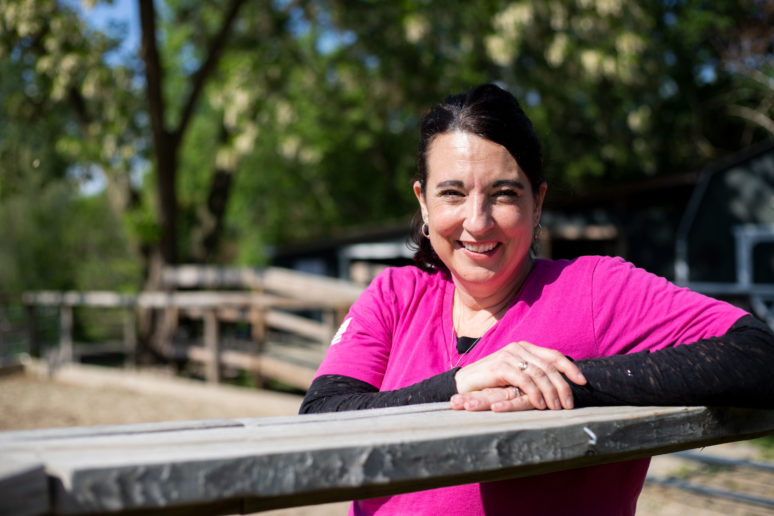 “Humans tend to give in to pressure and pain.
A horse is opposite in their behavior.”
Racheal Gilmour, Co-Founder

She became a licensed veterinary technician, and was the director of veterinary technology at Baker College. After a stint working for Colgate/Palmolive, she became ill, suffering from a rare, genetic disease. But she didn’t want to sit around and feel sorry for herself. “I didn’t want to become my disease,” she says. She and Ted founded Equine Escape and it was incorporated and received its 501(c)3 status August 2016. 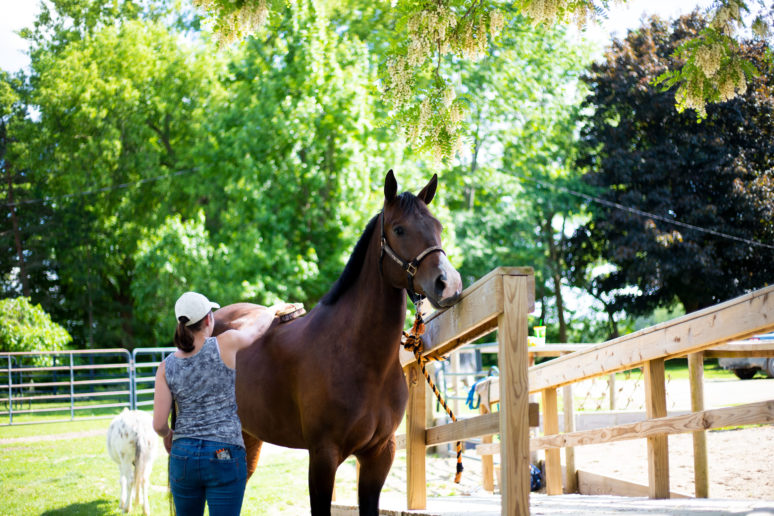 Currently, they have 28 students. Certified Facilitator, Shelby Edgette, leads the program for those age eight and younger who are autistic or have Down Syndrome. Rachael works with teens who are suffering from anxiety, depression or self-harming, and Ted works with the veterans on Saturdays. “There is a crisis right now!” Rachael exclaims. “There is a need for more facilities like ours.”
Just how does equine therapy work? According to Rachael, equine-assisted learning is based on the natural behavior of horses and herds. “As prey animals, horses deal with pressures and stress differently than humans do,” she explains. “Humans tend to give in to pressure and pain. A horse is opposite in their behavior.” 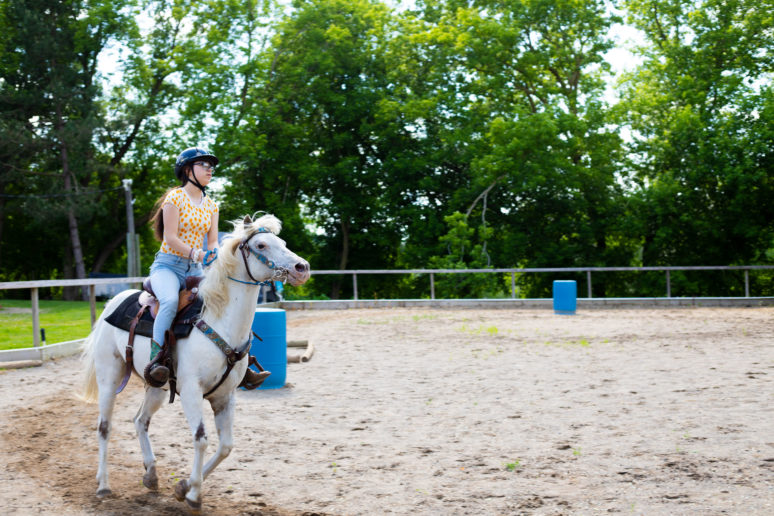 After a horse and a student are paired, they are given a set of exercises designed to help them learn how to deal with a problem. “They figure it out,” Rachael says. “They learn to identify a pattern, step back and look for resources. If a student doesn’t regulate their own emotions, the horse will not do what the student wants them to do.” Therapy is tailored to each person’s needs. Sometimes, it is just saddling up and going out on the trail. “It’s good for autistic kids to be outside,” says Rachael. “That’s their session. It makes them feel grounded.”
Working with the students is very rewarding for Rachael. One has a rare disease – so rare, it doesn’t even have a name. The 18-year-old physically looks 14 and, mentally, is age nine or ten. Suffering with debilitating anxiety, the girl would not make eye contact with people and was so anxious, her hands were clenched in a tight fist. So, Rachael partnered her with Marshmallow, the barrel-racing wonder. “He’s a crazy bullet, but he loves this little girl!” Rachael exclaims. It took her 18 months to get the girl to sit on the pony. When she finally did, the girl asked her mother, “Why does everything so fun have to be so scary?” Rachael recalls. “I cried over this kid for weeks.” Through the therapy, the girl has grown so much that she went to a horse show on her own, without her mom! 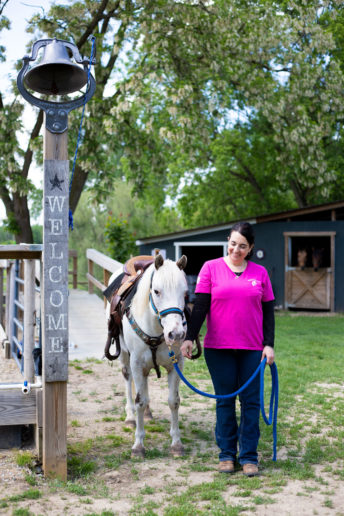 Equine Escape, Inc. is lucky to have volunteers who help out, Rachael says, including Sue, Tara, Madeline and Alex. “They’re my family!” she exclaims. “Their opinions and suggestions make this place a success. I couldn’t do it without them.”
The organization also has a program that addresses the needs of veterans and first responders, PTSD, reintegration into civilian life, alcohol/drug addiction and the challenges faced daily in the line of duty. The program is free through the support of donations and sponsorships. “The veterans are amazing,” says Rachael, adding that a group comes there monthly and others attend on a weekly basis. “We’ve found it best to let them show us what they need,” she reports, adding that there is one veteran who comes out and just sits under a tree with a lead horse. Another veteran comes to take a trail ride. “For them, that’s complete and total therapy,” Rachael adds.
For more information about what Equine Escape has to offer, visit equineescapeinc.org.