Musical talent runs in Katie Stanley’s family. “My grandfather’s cousin is Ralph Stanley of Ralph Stanley and the Clinch Mountain Boys, and my grandmother was the very first top saleswoman for Yamaha pianos,” Stanley shares. “She would go into Grinnell’s, when they wouldn’t hire women, and sell pianos. She sold so many as a non-employee, they ended up hiring her!” The entire Katie Stanley Band erupted in laughter at her story – the sound was beautiful music created by years of friendship, and the harmony was perfect. 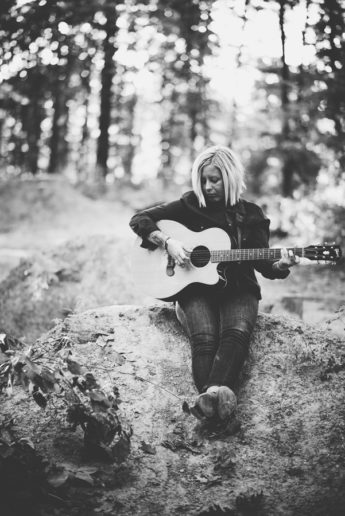 The band came together just over five years ago. Stanley had been playing solo in Flint at small venues. “I  grew up playing shows in Flint. My parents would drop me off downtown,” she remembers. “There weren’t a lot of artistic outlets in the city and the Flint Local 432 was great.” It was during one of her solo shows that Katie met bassist Tammy Pendleton, and her friend, drummer Michelle McAuley. “When we first saw Katie, she was so good that I remember going up and asking for any albums she had,” says Pendleton. “I was going to buy them all.” They struck up a conversation, and Stanley eventually asked if Pendleton would like to play bass with her on her first EP, Canary in the Coal Mine. McAuley soon joined, as well. “Tammy was at my house one day and told me about playing with Katie, and I told her that she had better figure out a way to get me on that album,” said McAuley to a fresh burst of laughter from her bandmates. “Yeah, I snuck my way in there.” The three have been making music together ever since.

The band describes their music as Folk or Americana, with just a sprinkle of country to taste. Their first two EPs, Canary in the Coal Mine and When in Roam, are full of the natural energy found in community, hope and emotion. Songs such as “Make You Mine,” “Friday Night,” “Bones” and “When in Roam,” are band favorites that highlight the kind of sound they love to create. Each song is very personal to the band, and each member has an equal voice in development. “I start to hear a melody coupled with what I am feeling at the time,” explains Stanley. “I’ll pull that out and start writing. The emotion connected to the melody helps decide the instrument I will use. Some songs are piano songs; some are guitar or whatever else.” She then shares her idea and lyrics with Pendleton and McAuley. “Almost immediately, we figure out together how we want it to sound,” she adds.

“In Flint, you have a feeling of acceptance, of home – that you are a part of something. We are all involved.”

When not writing songs, the three women are all accomplished professionals in their own right. “We are professionals by day, and rock stars by night!” says McAuley as the others laugh. The drummer is a credit union compliance officer and feels it is a perfect fit for her. “I love doing what I do – it satisfies both sides of my brain,” she says. “My job is very technical with lots of rules and regulations, and in music, there are no real rules. I love it.” Pendleton is an accomplished pharmacist and like the others, she would not change a thing. “I can’t imagine not playing music or not being a pharmacist. I love the balance of both.” Stanley is a lawyer at Legal Services of Eastern Michigan (the only civil legal aid in Flint) and a musician, but not truly in that order. “I’m a musician first,” she states. “The lawyer part is always surprising to me. The question is really, ‘how do I fit my life around music?’ It enriches my life in a way that makes me better at everything else.” In addition to being an attorney and musician, Stanley chairs her bar association’s community action committee, serves on the Flint Local board, the Factory Two board and the Blue Water Safe Horizons board in St. Clair County.  She also serves on the executive committee of the Community Housing Resource Board in Genesee County. McAuley serves on the Internal Affairs Committee at Factory Two.  All three women are very active in the promotion and growth of equality and acceptance in our community.

“We are all members of the LGBTQ community and we like to stand for equity in our community,” Stanley explains. “We try to make ourselves a part of the greater whole, because our voices are so much stronger together. My grandmother who was the first female piano salesperson owned a piano store on Miller Road, and she had gay men come in and play piano all the time when it was still illegal to be gay. We try to honor her memory in that sense and stand up in those places in our community where there may not be equity.” With that statement, the band agreed, whoeheartedly.

Emotion and feelings of acceptance and equality have always been a strong part of Stanley’s life. “When I was young, music was an outlet that gave me a constructive place to put my feelings and give validation to them,” she says. “It wasn’t acceptable to be gay when I was growing up. A lot of songs are not happy, they are born out of difficult feelings that people struggle with. Not only are they difficult internally, but in song, I began putting them on display for complete strangers. It’s scary, but empowering. I feel that if people can understand that, they could relate to it and feel more empowered to share. There is a real cool thing that happens when you play, in that you don’t have to have a conversation to connect with people. It happens naturally.”

This month, the Katie Stanley Band will release their third EP, Lake Superior. It features songs reminiscent of the past two EPs, with a few small changes. “This album has a lot more piano on it. It’s cool – we stayed the same in ways, but expanded our sound,” McAuley says. “I played toms for one song. I was against it at first, but it turned out great.” The inspiration for the new EP comes from the heart of the band and the emotion of Stanley. “Last summer, I was swimming through the caves in Lake Superior and realized that this particular period in my life has been defined by a lot of adversity and hard work,” she shares. “I wanted to find the person I want to be when faced with all these new factors. That feeling reminded me about what it felt like in Lake Superior – instantly realizing how small you are and how powerful the greater world is.” Lake Superior was recorded at Oneder Studios in Saginaw and the band would like to thank Nick Diener for helping them out and being awesome.

“We try to make ourselves a part of the greater whole,
because our voices are so much stronger together.“
Katie Standley

In the meantime, Stanley, Pendleton and McAuley will continue to play music, serve the community and appreciate every day in Flint. “There is something for everyone in the city now,” says Pendleton. “I am proud to live here and I love living here.” McAuley agrees. “People see all of the bad stuff on the news, but they just don’t know how great the people are here. The sense of community is undeniable. Everyone comes together, knows one another and is willing to lend a hand. I love Flint.”

Stanley echoes the sentiments. “In Flint, you have a feeling of acceptance, of home – that you are a part of something. We are all involved,” she continues. “A lot of people in our community are so disenfranchised and have faced so much social injustice that people feel like their voices don’t get heard. Give yourself a voice. Your voice is important. Your voice is equal and deserves to be heard.”

The music of The Katie Stanley Band can be found on Spotify, Pandora and iTunes or at katiestanleymusic.com. Have a listen, then go to MyCityMag.com and comment with your favorite song at the end of the article.