Brett Darago (better known around Greater Flint as DJ Chachi) grew up on Flint’s eastside and life was a little tough. His dad passed away when he was nine years old. “I did some dumb things back then,” he recalled, “and my life was not going in a good direction.” But there was one experience and one teacher who changed everything for him when he was a freshman attending Flint Central High School. The experience? Theater Class. The teacher? Martin Jennings. “Mr. Jennings turned my life around. I fell in love with his theater program and his overwhelming personality.” 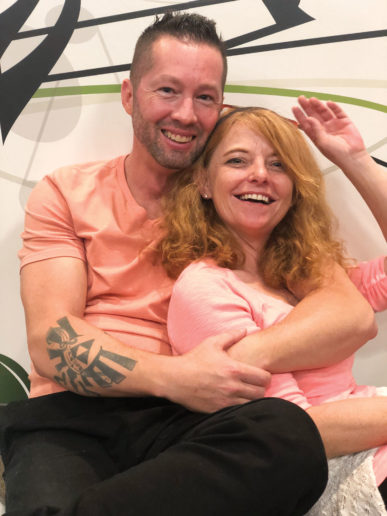 During Darago’s four years at Central, the theater group performed two musicals and two Shakespearean plays. In 1992, they performed “The Sound of Music,” a massive undertaking. And thanks to the new Disney Plus reality series, “Encore!” produced by Kristen Bell (“Frozen”), some of the students were able to perform it again – 27 years later! The series was the brainchild of Bell and producer, Jason Cohen. They wanted to find former members of theater groups from high schools around the country, take a look at how theater impacted their lives, and then offer them the opportunity to give an encore performance of the original musical in which they performed. The entire experience was filmed and then made into an “Encore!” episode streamed on Disney Plus.

“They were looking for people whose lives had been influenced or changed by theater when they were kids,” Darago explained. “I wouldn’t be doing what I am doing now if it wasn’t for Flint Central’s theater class.” He is currently a well-known DJ in the area and the DJ for the Detroit Pistons and Red Wings, among other projects. 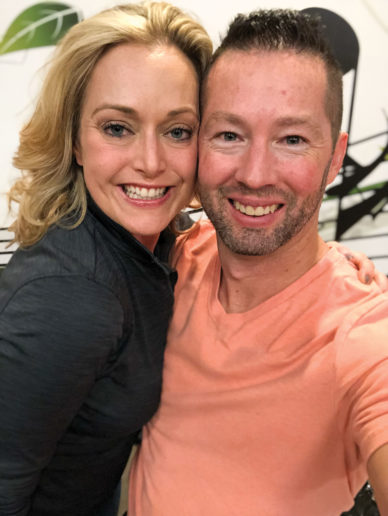 Michelle Hayes reprised her role has Maria Von Trapp in the “Encore!” production.

Darago and Michelle Hayes, who both live in the Flint area, along with Jacob Desgrange of Davison were chosen to be in the reality series. The other former students who participated included: Amy Aumick (Liesl von Trapp), Joi Price (The Baroness), Kristy Petrich (Mother Abbess), Zak Kareem (Max Detweiler), Lisa Robbin Young (Sister Bertha) and Sam Rawls (Friedrich von Trapp). “We were able to keep our original roles,” said Darago, who portrayed Rolf Gruber (a Nazi and Liesl von Trapp’s love interest). Desgrange, however, was recast in the role of Captain von Trapp. Hayes reprised the leading role, Maria. Disney also enlisted some professional and Broadway talent to perform in the musical.

When Joi Price, who lives in New York, got wind of “Encore!” she immediately thought of the Flint Central theater group and how it had changed many of their lives. She was able to get in touch with the right people.

Darago, Hayes and the others soon received e-mails about participating in “Encore!” Darago remembers thinking it was a joke. “But Mr. Jennings had also heard of it and told me to respond to the email. It was a real thing.” So, he corresponded with Disney and shared his story about how theater had impacted his life. He then had a face-to-face interview with the producer via Skype. “I didn’t hear anything for six months. I thought maybe they didn’t want us,” Darago said. Finally, in November 2018, he was interviewed again and this time, unbeknownst to him, Kristen Bell had been listening. When the interview was finished, she told him things were looking good for the Flint Central group.

After that, things happened very quickly – filming was set to begin in February-March 2019. The group met at various locations, exploring Flint and seeing all of the changes that had occurred over the years. “The film crew followed us each for a day,” Darago said. Hayes remembered wearing a microphone the entire time. 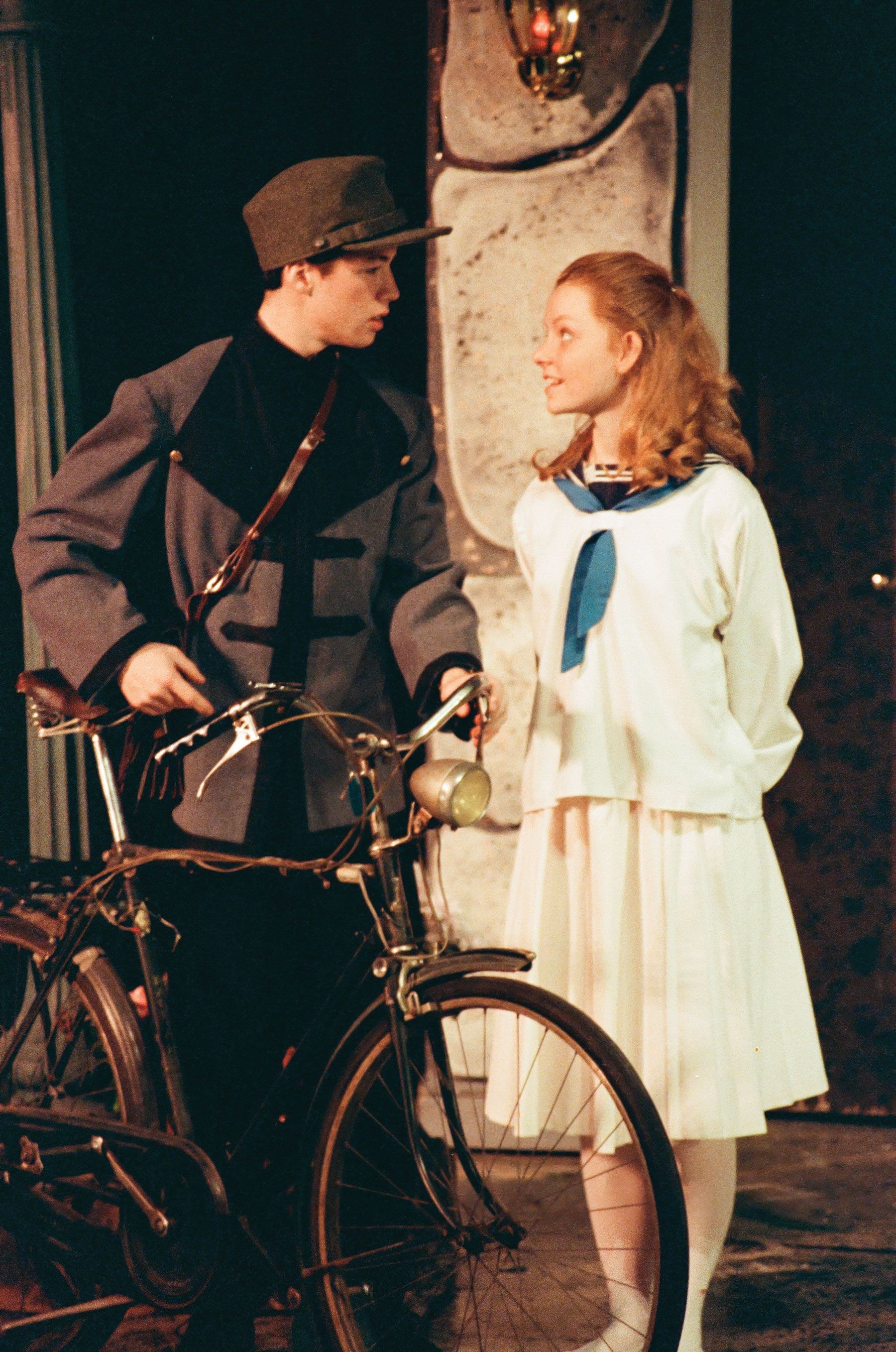 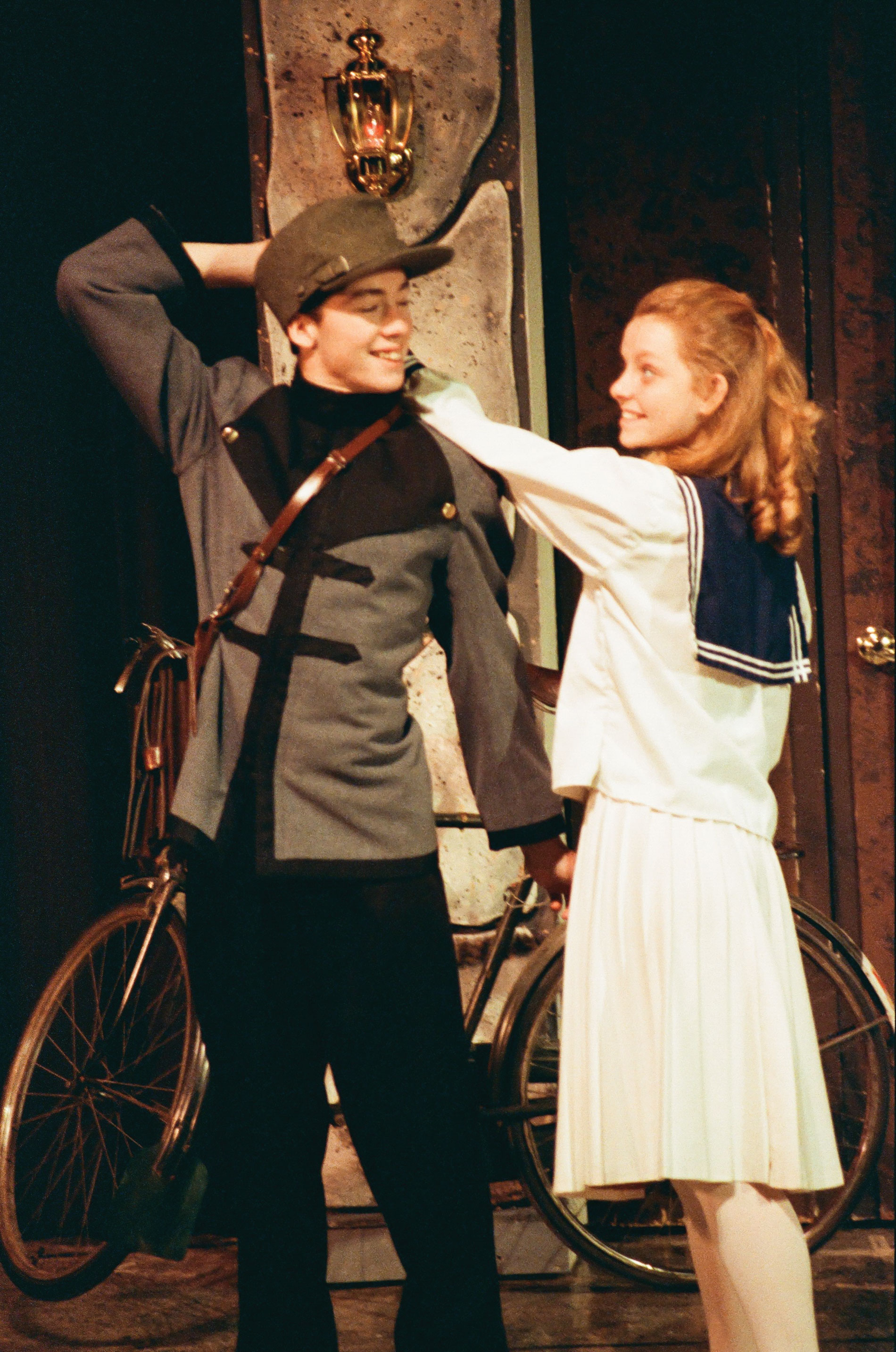 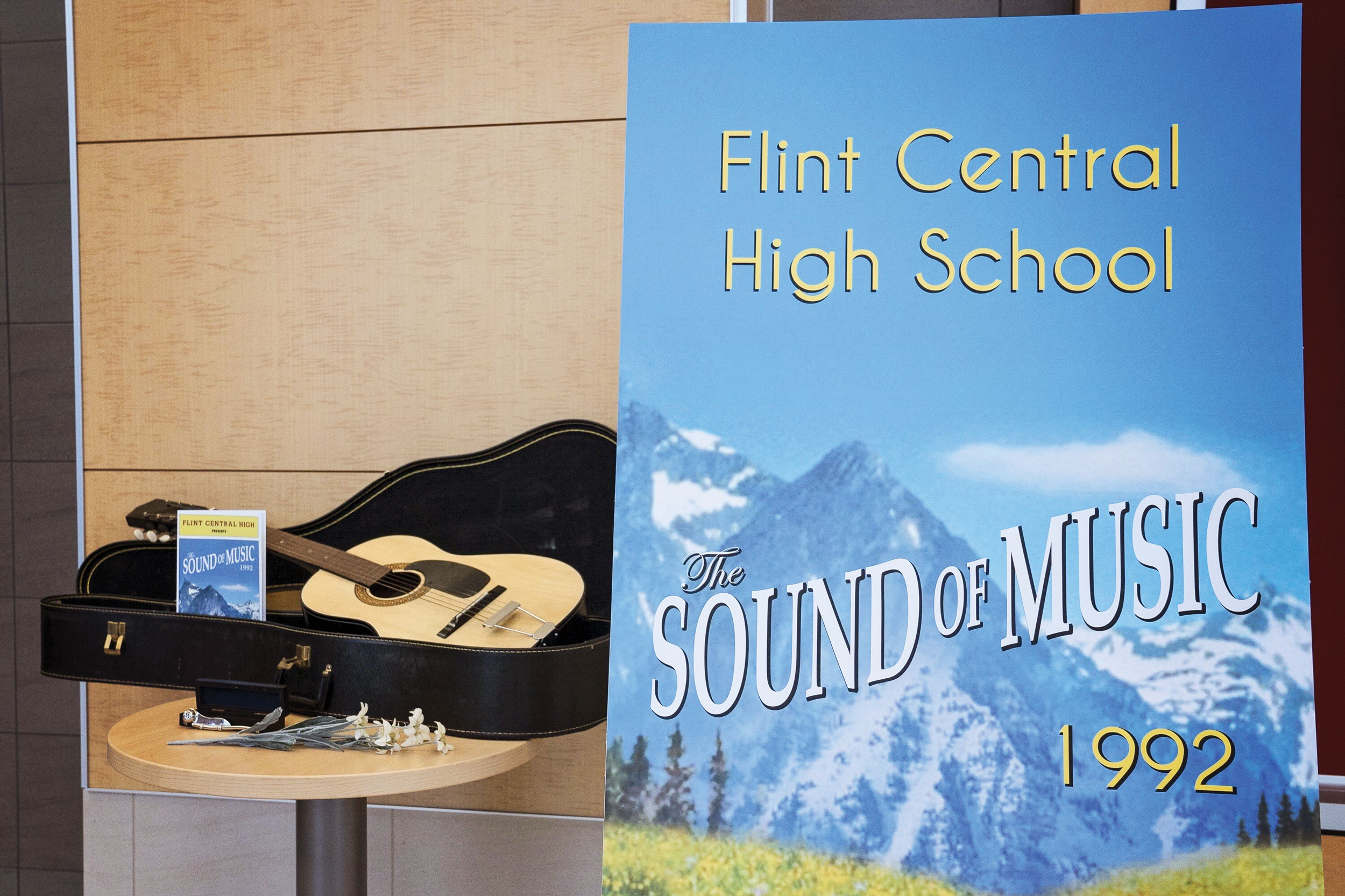 One of the best parts of this experience for the Flint Central cast was reconnecting. “We had always been a tight-knit group,” Hayes remembers. “We were so close. It was so good to see everyone again.” Darago recalls having a huge crush on Amy Aumick in high school. “I used to be in love with Amy! I was so nervous; when I first saw her again, it was mind-blowing,” he laughed. “We actually got to kiss in the encore.”

Probably the most emotional experience for the entire group was going back to Flint Central and seeing their old school, fallen in ruins, which brought many of them to tears. Hayes shared, “Holy Cow! It was rough to see it in ruins. It broke my heart.” Darago added, “it was an emotional roller coaster.”

“I wouldn’t be doing what I’m doing now if it
wasn’t for Flint Central’s theater class.”
Brett Darago 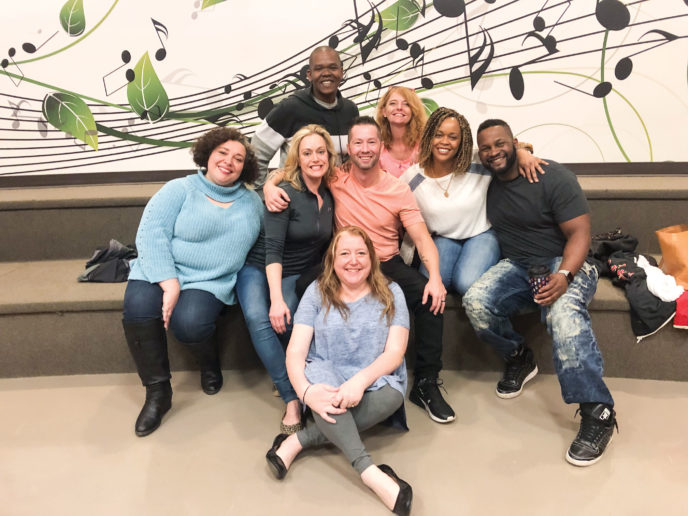 Once everything for the production was in place, the actors only had five days to re-learn their lines and the music. “We were rehearsing 15-16 hours a day and there were props, staging and costume changes,” Darago said. A voice coach, Roger Love (who worked with Bradley Cooper for the movie “A Star is Born”), was hired to work with them. “In one day, he changed the way we all sang.”

“Dress rehearsal was a complete nightmare,” Darago shared. “Somehow, we pulled it together in 24 hours.” With just five days of rehearsal, there were many tears and emotions ran high. “This was probably the most overwhelming thing I have ever done,” Hayes admitted. “We only had five days to relearn the music! The first time was almost 30 years ago!”

Finally, the group was ready to perform. The encore performance of Flint Central’s “The Sound of Music,” was staged at the Swartz Creek Performing Arts Center in April. “It’s a beautiful place, but we wished it could have been held at our home (Central),” Darago said, emotionally.

Martin Jennings, their beloved theater teacher, had a small role in the musical. “When he walked out, he got a standing ovation in the middle of the show! We were so glad he got to be a part of it,” Hayes said. “It was absolutely touching. He affected so many lives. Words cannot express what he did for so many kids.”

The overall production was an amazing experience, she added. “It’s something I will always treasure. It was like riding a bike. I still feel like that 15-year-old sophomore who played Maria in 1992.” 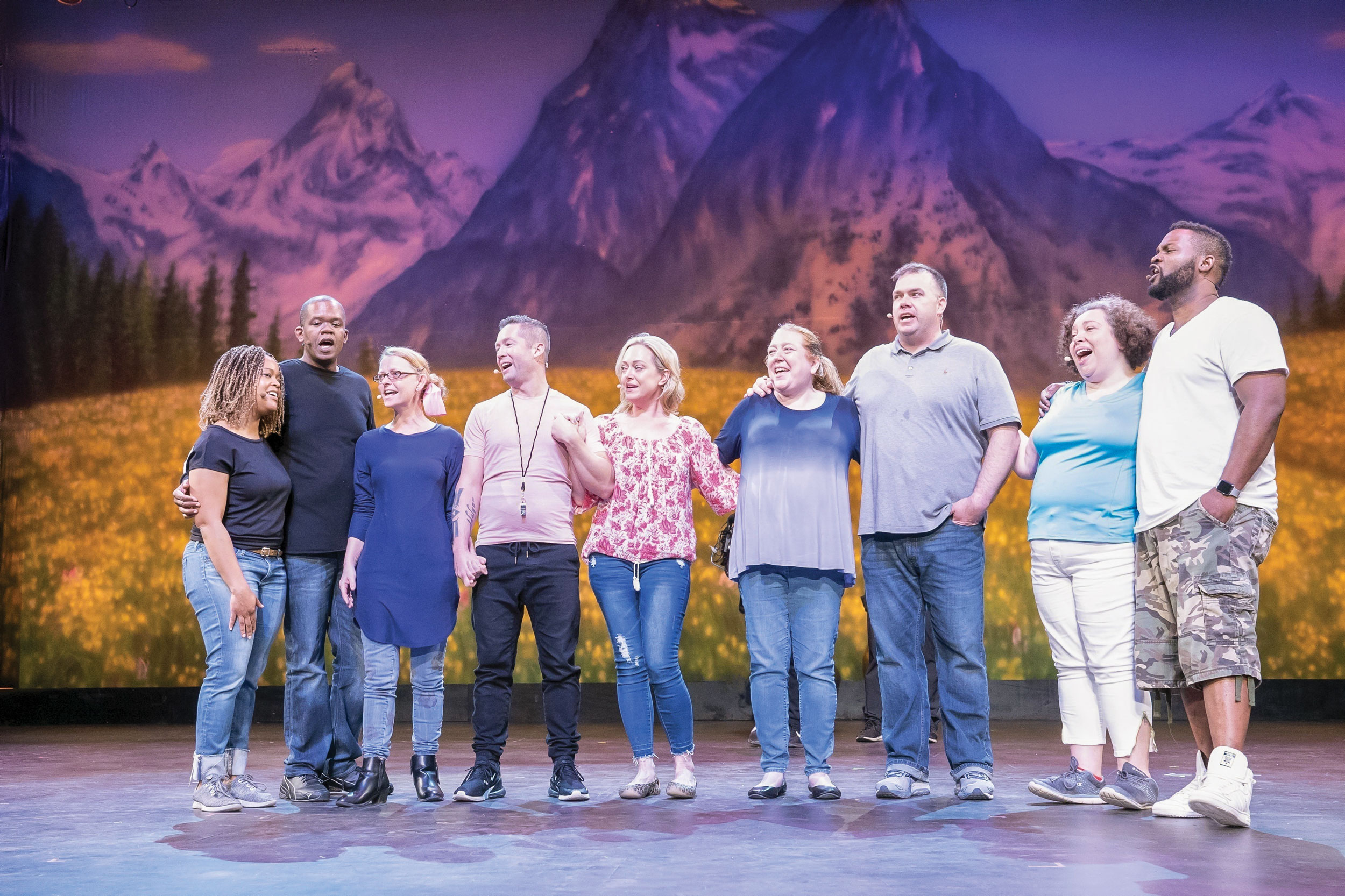 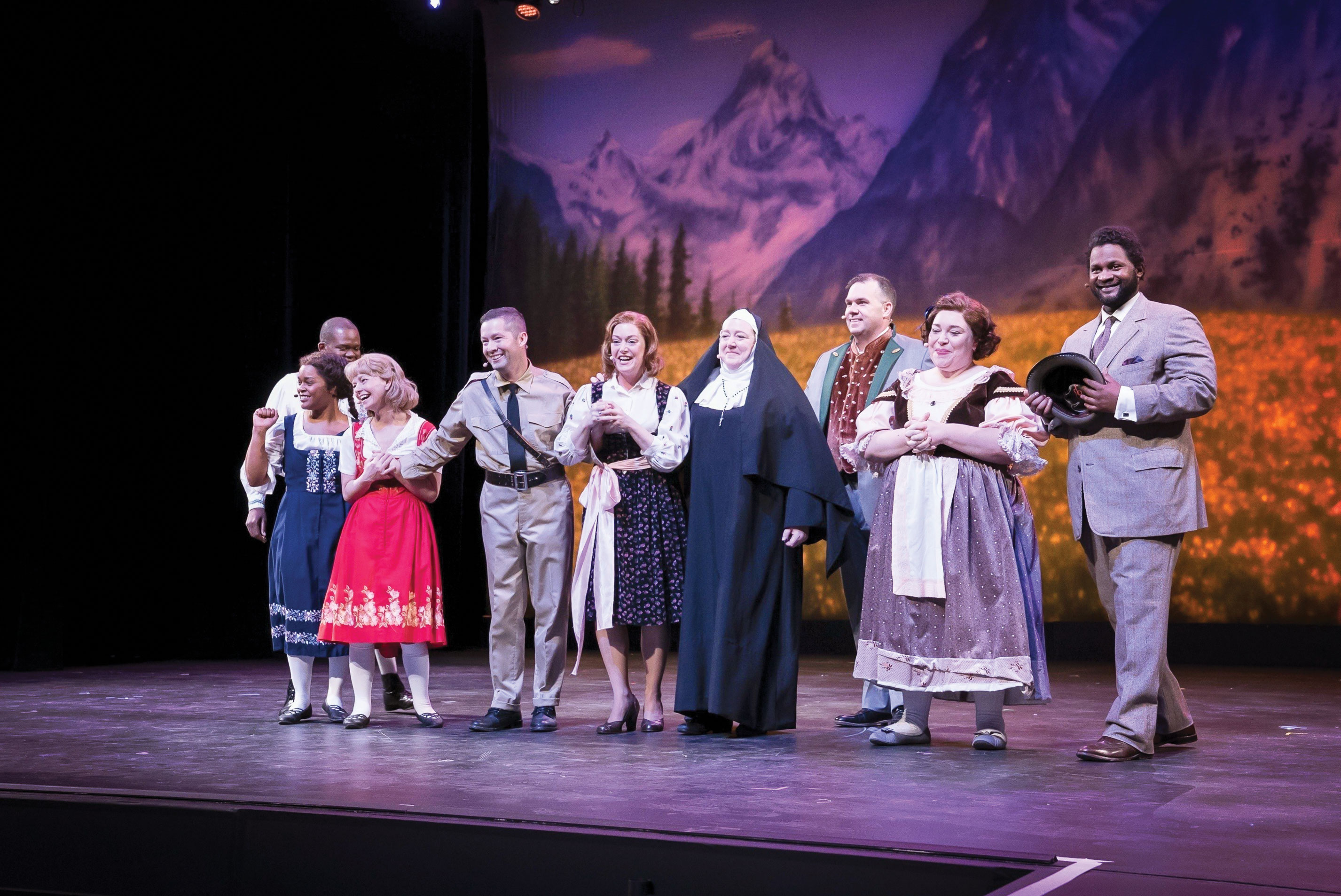 The Episode of “Encore!” on Disney Plus

The Flint Central episode was released at midnight on November 22, 2019 and they all couldn’t wait to watch it. “Our episode is really heartfelt and emotional,” Darago admitted. “Central was such a sentimental and caring school. We were all so close. Being involved in this tremendous undertaking was one of the best experiences of my life. I would give anything to do it again – I want another encore!”

“Being part of Season 1 of the program ‘Encore!’ on the new Disney Plus web TV service has been a wonderful honor for the former students and for me. When we closed the original show after eight sold-out performances over five days in December 1992, it never occurred to us there would be an encore performance decades later.

There was tremendous talent in the Flint Central High School Fine Arts Magnet program before and after 1992. It was one of the most successful programs in the magnet that ended, with great disappointment, in 2006. The filming of the actors preparing for Disney’s ‘Encore!’ represented themselves, their school (closed since 2009) and the city of Flint for an international audience all over the world on Disney Plus. Their passionate work ethic, attention to doing their best and pulling together as a team to produce quality work was no different today than 29 years ago.

Their hard work, honesty and sincerity onstage, on-camera or offstage was inspiring! As their director then (in 1992) and now, I experienced a deep sense of pride in what was accomplished. Not only did they have the opportunity to reconnect after almost three decades, they demonstrated the spirit of people from Flint who never give up and don’t back away from hard work.

Watching them again in a professionally televised program seemed almost surreal. While they’re successful adults now, they’re still those same special kids I was blessed to work with when they were in high school.

While they only had five days to create the ‘encore,’ they certainly proved, as sung in one of the show’s most memorable songs, it is NEVER impossible to ‘Climb Every Mountain’. For me, THAT’S consistent with the story of the people of our city – Flint, MI!”