Darkened under shadows of the city’s economic hardship, Flint’s vast Mott Park acreage is split by the Flint River and connected by a quaint pedestrian bridge. Old tennis courts sport new nets, a freshly-painted playground still has a cool rocket ship slide that has stood the test of time, and a once lively golf course known for years as the park’s centerpiece all patiently wait for a new vision to permanently take hold of this historic park. 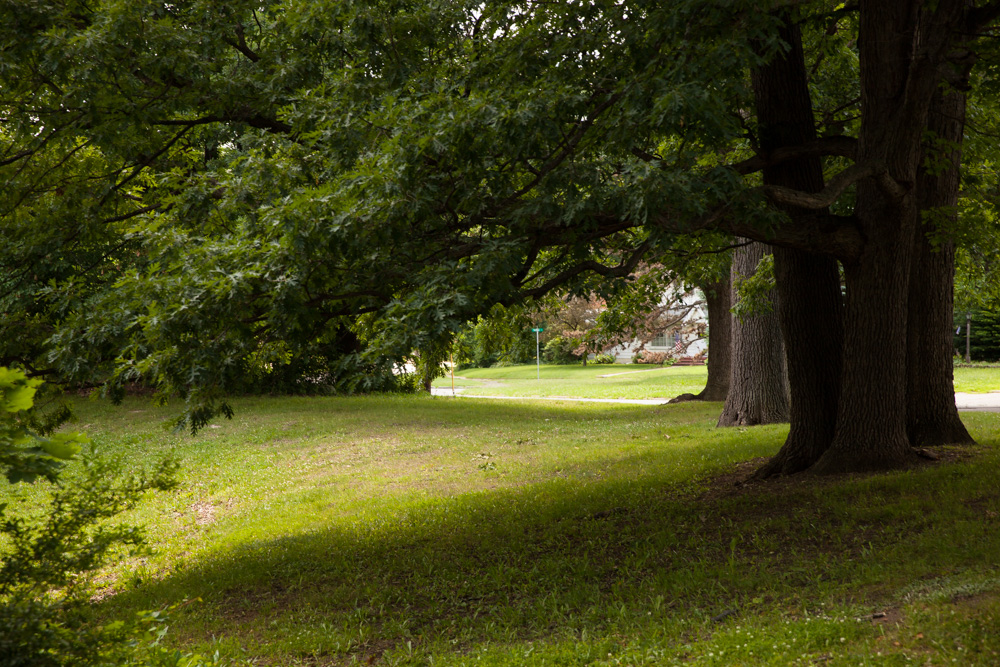 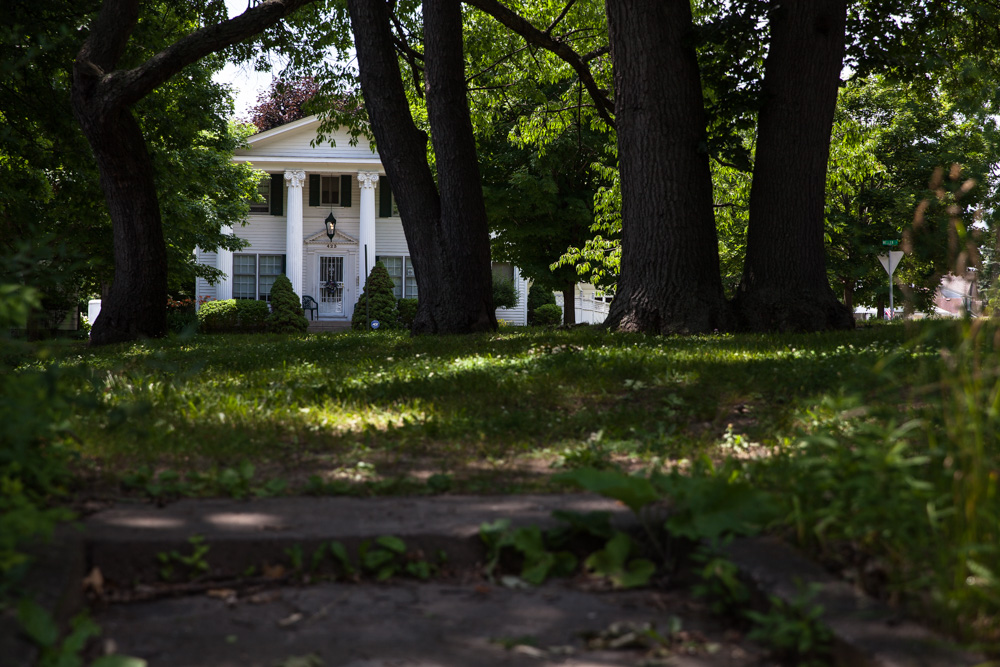 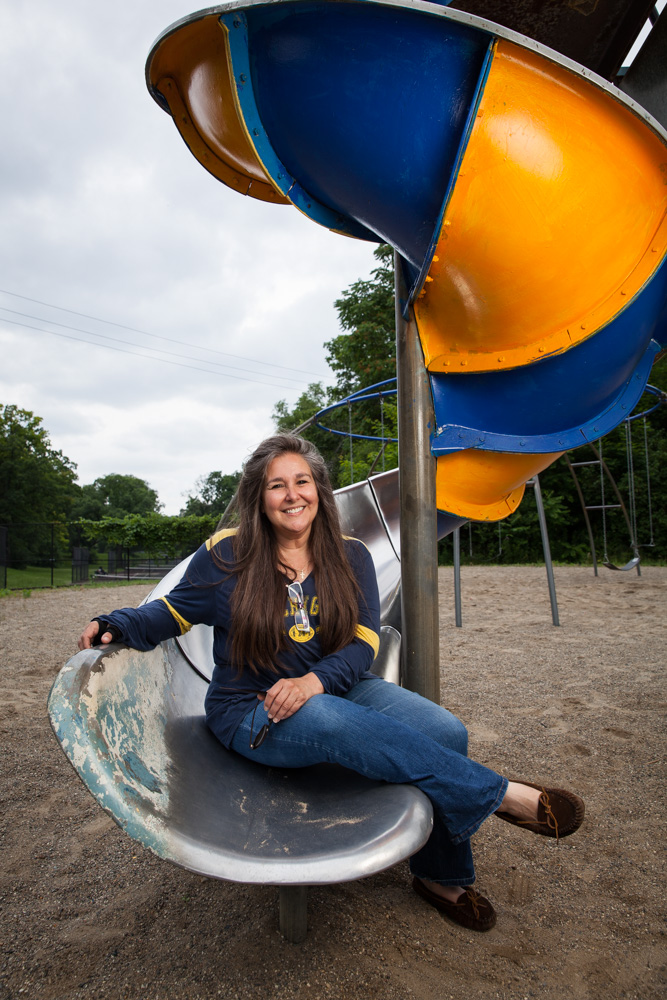 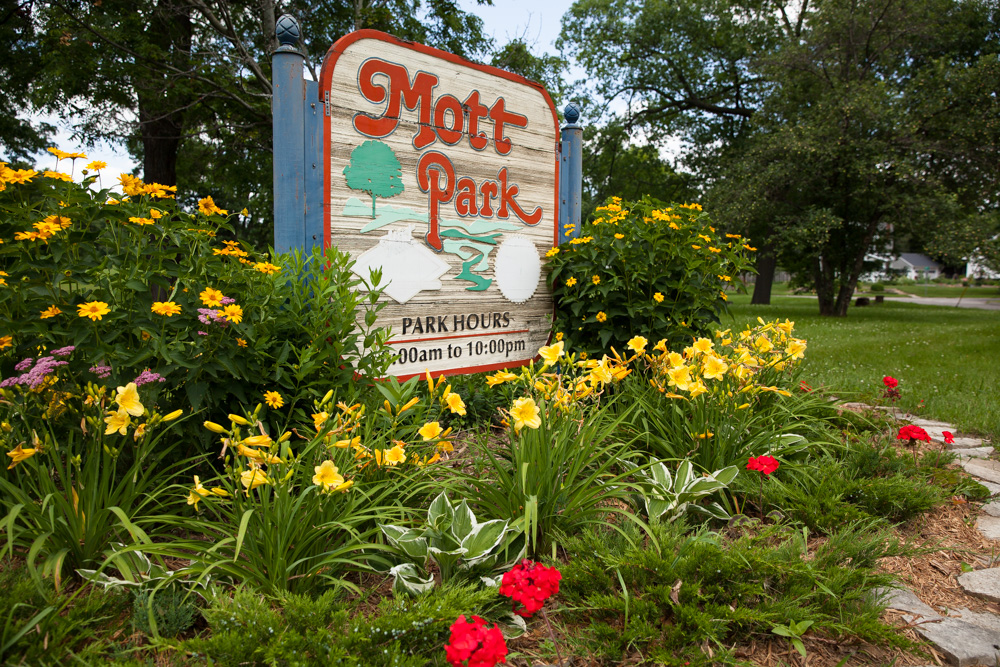 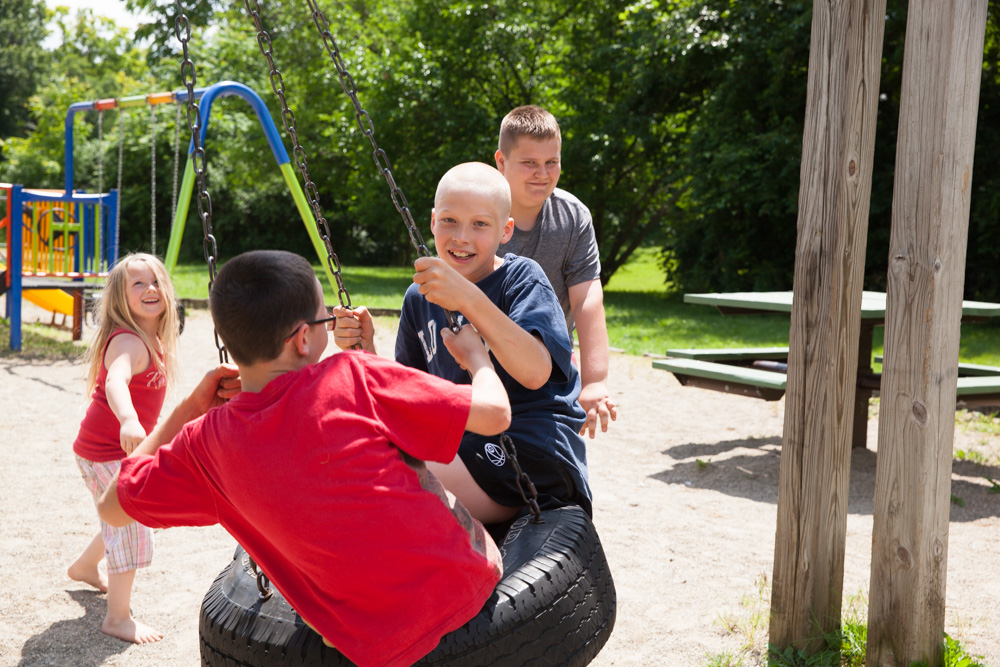 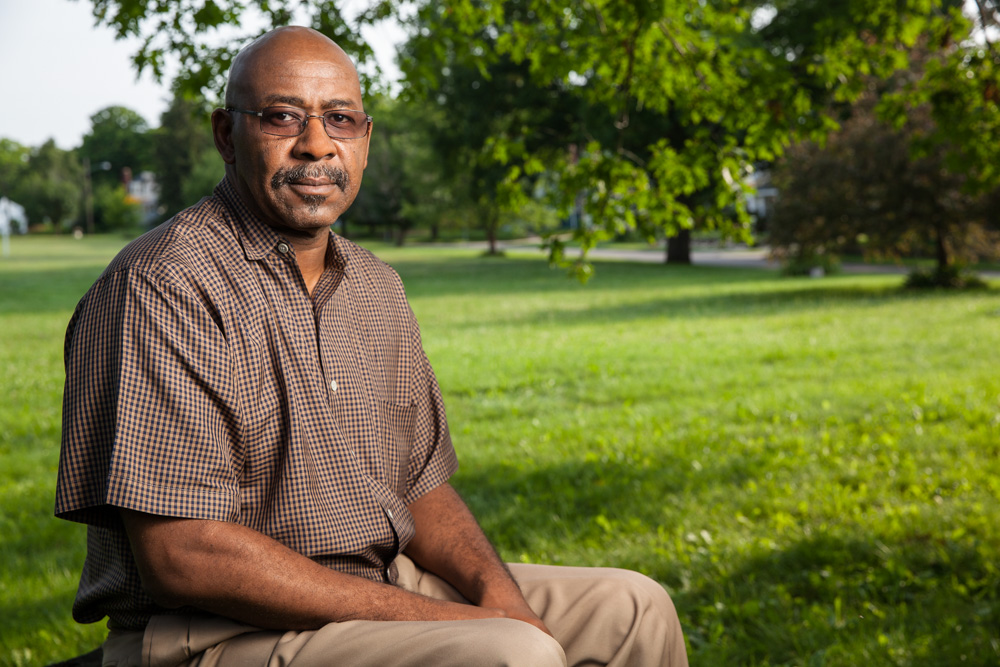 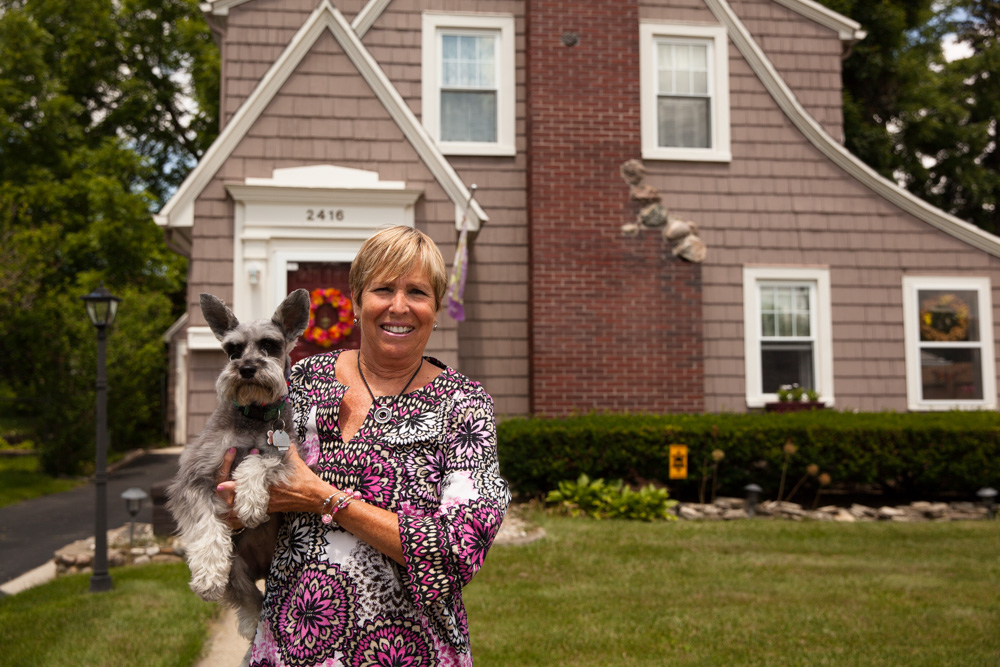 Today, the Mott Park Neighborhood Association and Mott Park Recreation Association, along with other local volunteers and church groups, continue to take responsibility for up-keep of the park. That includes mowing, maintaining the playground and tennis courts, picking up litter, planting flowers, trimming overgrown foliage, cleaning up the amphitheater, updating some of the lighting, and improving the now-closed clubhouse.

Grant dollars, private donations and membership dues from the MPNA are used to spruce up the park with the hopes of bringing families back to enjoy it on a daily basis. Mott Park neighborhood residents remain vigilant in their goal to repurpose the golf course into something that benefits the whole community, and will make the park an inviting and fun place again. For them, giving up on Mott Park is not an option.

MPNA President Nada Radakovich spent some time with My City Magazine during a recent visit to Mott Park, reminiscing about how much fun it was to climb up into the rocket as a kid and view the park, to swing on the swing set with her friends while trying to “touch” the house across the street with their feet, playing pick-up softball games, and watching concerts and plays at the small amphitheater.

“Everybody would have a blanket and we’d have poetry readings and concerts and plays,” recalls Nada, who returned to live in Flint in 2007 to care for her father, following a career as an opera singer. “Everything has changed because the city can’t keep up the maintenance anymore. We’ve been fortunate to receive a number of grants and we’ve been working really hard to try to make the park kid-and adult-friendly.”

More programing such as Music in the Parks, performances by Kearsley Park Players, volunteer clean-up days, and a well-attended neighborhood spring picnic, have also helped neighbors to connect. The MPNA continues to apply for grants and encourages donations from community members. The goal is to bring the park back to life and encourage more residents to personally commit to revitalization efforts.

“I’m hoping that kids will tire of their video gaming and internet, and that they come out and play again,” says Nada. “It’d be so cool if the neighborhood kids got together and created a group of kids who care, mowing the lawns and helping. It takes each one of us. I would love for Mott Park to be a place where kids are proud to have come from after they go out and make their mark.”

The MPNA has an active group of hardworking members, although only 150 of them are dues-paying members out of 1,300 homes in the neighborhood, Nada explains. Dues are just $15, and the money from dues and grants are used efficiently for park improvements and maintenance. 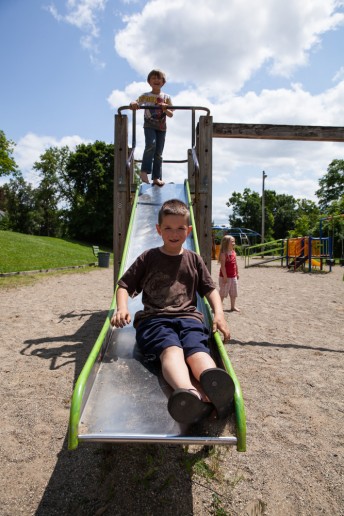 Laura Olds, who lives in a cute home on Norbert Street, is retired and has been a MPNA member for 15 years. “I always pay my dues,” she says. “It’s the least I can do. The park has changed a lot over the years. We all look out for each other, and there’s always security driving around the neighborhood.” Laura regularly walks her dog in the neighborhood and appreciates the park up-keep, as well as the volunteers and church groups who have painted some of the homes in the neighborhood.

Laura has already made many interior upgrades to her home. She anticipates having the leaky roof replaced through a grant from the Genesee County Habitat for Humanity’s home repair project that was recently made available to homeowners who meet certain incomes and other guidelines. “I’m excited because I love where I live,” she says. “I’m so happy they’re going to put a roof on my house.”

Parts of the Mott Park neighborhood are characterized by diverse architectural home styles, from bungalows to Dutch colonials. A magnificent Tudor house is a neighborhood landmark where Norbert F. Dougherty lived in the 1920s and began his plans for General Motors’ new Modern Housing Corporation. A unique, contemporary home was once owned by Alden B. Dow, who studied architecture under Frank Lloyd Wright. The home is currently being restored by Dow’s family members. A house on Weller Street reused the old Carnegie Library’s massive pillars after the library was torn down.

Blight remains a concern for Mott Park residents, and the MPNA has worked hard to revitalize vacant and dilapidated properties. Grants and private donations have helped pay for mowing and clean-up of many of these properties. The area is regularly patrolled by city and county officers, as well as McLaren, Hurley and Kettering security staff. Residents keep watchful eyes, reporting any suspicious activity.

City Councilman, Herbert Winfrey, who lives in the Mott Park neighborhood and represents the Sixth Ward, sees potential in Mott Park. After serving in the military, he arrived in Flint in 1980 to visit relatives and then made his home here. He says the community has discussed a variety of options to reuse the golf course property in ways that would benefit the whole community, like canoeing, a driving range, or even disc golf. The city’s Master Plan is a part of the redesign process, incorporating the interests of residents to determine what they want their neighborhood to become.

“I’m very optimistic about the possibilities,” says Councilman Winfrey. “I am so impressed with the planning and evaluation ability of the neighborhood association. I don’t think we’re going to let the park sit there and do nothing for long.”

To join the Mott Park Neighborhood Association or to donate, please visit mottpark.org.

“I am so impressed with the planning and evaluation ability of the neighborhood association. I’m very optimistic about the possibilities.”
Herbert Winfrey, City Councilman