The calls started coming in while Todd Gilbert was busy in the recording studio. “I was working on a project of mine when I started getting tons of phone calls from people who don’t usually call me,” he remembers. “I answered a text from Michelle McAuley, a fellow musician, telling her that I was in the studio and would call her when I was finished. She texted me back and said to stop what I was doing and call her. My heart dropped and I knew something had happened.”

Gilbert immediately called McAuley and she told him the news. Ashley Peacock, beloved Flint musician and Gilbert’s friend of over 25 years, had taken his own life the night before. “A few of us got together that night to try to deal with and mourn the loss of our friend. He meant so much to so many people,” says Gilbert. Peacock was an integral part of Flint’s music scene and his memorial held at Factory Two in Flint was packed shoulder-to-shoulder with hundreds of people. “Some knew him a long time and some only met him in passing,” says long-time friend, Johnny Mason, “but they all knew he was somebody worth missing. He had a huge impact on Flint and he will be missed.” 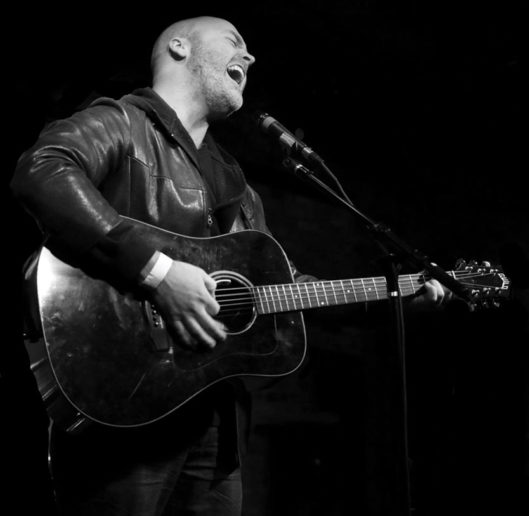 Soon thereafter, Gilbert received a call from Peacock’s family. They asked him to be the one to take care of Peacock’s music. Gilbert took ownership and with that, he received a few hard drives containing the majority of Peacock’s work. As he sifted through the recordings made at Soul Foundry, Peacock’s studio, he made an amazing discovery. “There was a folder of project files of just Ash and his guitar,” remembers Gilbert. “It was all amazing stuff. All I could think was, ‘how can these songs not be heard?’” So, with help from Flint musicians and others, Gilbert set about producing Peacock’s posthumous album, “Echoes.”

The idea for creating a posthumous album was seeded on the night Gilbert first heard the news. He received a call from Grammy-winning, mastering engineer Hans Dekline from Los Angeles, a friend of Peacock. “Hans brought up the idea of doing a tribute to Ash, an album of covers or something like that,” says Gilbert. “He was the first person to volunteer and said he would master it for free. At the time, I didn’t know the songs on the album even existed.” Gilbert wasn’t sure a tribute was even feasible but when he found the file of songs, all of that changed. He felt he needed to help Peacock release one more album. With the blessing of Peacock’s family, Gilbert began to contact musicians who knew Peacock best and who had played music with him throughout his life. “I didn’t want to get just any person who played with him. I wanted people with a deep-seated history and friendship,” says Gilbert. “I wanted it to be those who would have really known what Ashley would have wanted it to sound like.” Gilbert contacted former band members and close friends. One was Johnny Mason, a friend for over 20 years and former member of Building Birds with Peacock and Gilbert, “I felt that I had to do it,” says Mason. “It was very difficult, but it was a great way to show compassion to somebody who many of us were really mad at then. It gave a lot of us a sense of peace – it was a great way to pay tribute to his creativity.”

Soon, so many musicians wanted to be involved that Gilbert had to turn many away. “That was so hard,” he says. “It was not because we didn’t need their help, it was because we only had nine songs and we were running out of room for everyone.” The final album is a collaboration of 14 musicians from Flint, Nashville, Cincinnati and Los Angeles. 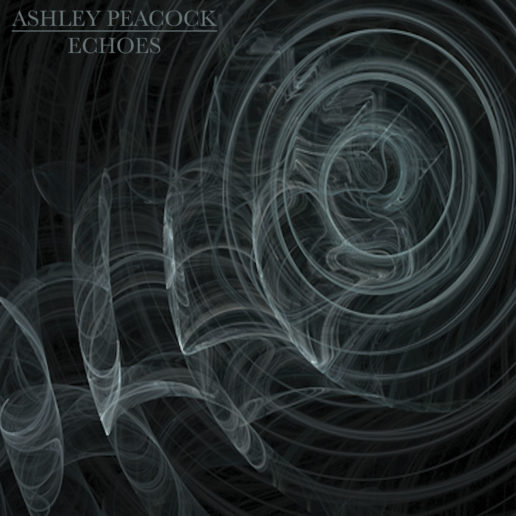 For all of the musicians, “Echoes” was a very difficult thing to create. None more so than Gilbert, the drummer for almost every track. The project recordings consisted of nothing more than Ashley Peacock and his guitar. “I second-guessed myself all the time,” he says. “We took what we had and added what we believed Ash would have wanted to hear. I wanted it to sound as if we were at practice and a song came together. I wanted it to sound like Ashley was in the room with us.” Mason plays bass on two songs and struggled emotionally with the process. “I didn’t even listen to the demos until the day I was due to record,” he says. “It helped me to think that Ashley was in the control room behind me. I remember playing with him and he would say, ‘Yep, that sounds like a Johnny Mason bass line.’ I just wanted to play a Johnny Mason bass line. Nothing more.”

For Gilbert, Mason and the rest, the album is more than just songs written by Ashley Peacock, it is a representation of who he was as a person and to his friends. He was a person full of compassion, an ear for so many dealing with deep-seated feelings. He knew what it was like to hurt. He poured his heart out in his music and it was that raw emotion that made him such a lifeline to others. “He was extremely talented, very insightful and profound. He talked about feelings openly which is rare for a guy in our society,” says Mason. “A lot of other men appreciated that in him, in that they had someone they could talk to.” Gilbert adds, “Lately on social media, I’ve seen that a lot of people are still coping with the fact that he was that one person for so many, and now, that one person is gone.”

It is hoped that the sentiments expressed in “Echoes” will continue to help others as Peacock did in life. It is a hope shared by guitarist Kris Kress, who both co-wrote and played on the song “The Hours” for the album. “I was in the darkest time of my life and music is what brings me out of things like that. Ashley was kind enough to write this song with me to help heal me,” he states. “This song was never meant to see the light of day, but hopefully, it can help heal people the same way it healed me. Ashley was a great man and I wish I could have helped him the way he helped me. Releasing this song on ‘Echoes’ is my way of helping others and bringing to light how great he was at his craft and as a human being.”

“It was all amazing stuff. All I could think was,
‘how can these songs not be heard?’”
Todd Gilbert

The nine songs on “Echoes” are a rollercoaster ride of feelings. There are songs of hope, of despair, of loneliness and love. It is Ashley Peacock throughout. “It truly is a perfect representation of him as a person. He wasn’t a happy, sunshiny guy all the time. Nobody is,” says Mason. “It touches on all the corners of who he was. It’s honest. We want to honor him but we also want people to realize that Ash was human. He was a real guy. He fought things that a lot of us fight every day and he was tired. I don’t want to candy-coat who he was as a person and the things that he dealt with, but I want to make sure that people respect who he was as a musician, artist, supporter and friend. He knew what it felt like to hurt, so he would be the first one to lend a hand. That’s the legacy we want to protect and not to dwell on how he died, because he was more than that.”

“The album is autobiographical. That’s why it ends with ‘Hallelujah’,” says Gilbert. “It’s a beautiful instrumental that Ashley put together. It’s the only song he didn’t put any vocals to and that’s strange because it was a song he loved to sing. I asked Karin to come in and play the vocal melody on violin and it added a really pretty and haunting goodbye.”

“‘Hallelujah’ is a truly fitting end for the album,” says Mason. “It was a Leonard Cohen song that was made famous as performed by Jeff Buckley, and Ashley was compared to Buckley all the time. In fact, last year he went to New York and played at Common Ground, the place where Buckley got his start. Every year, they do a showcase tribute to Jeff. Buckley’s mother was there and Ash performed two songs. He mystified everyone at his performance. When he left, Jeff’s mom personally asked him to come back this year. The idea of just wrapping this album up with something that Ash sang a lot and that he is vocally absent on, and the fact that he is not going to go back to do the Jeff Buckley show this year, is powerful.” 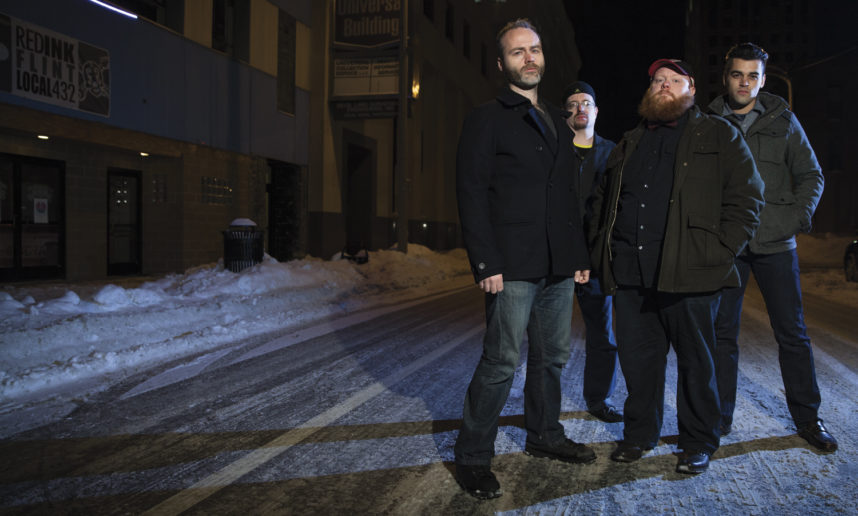 Gilbert considers the project to be the most amazing thing he has ever done musically. The musicians put their hearts and souls into an album to pay tribute to a person who put his own heart and soul into them and the city of Flint. “I think he would have loved this album,” says Gilbert. “There’s always kind of a cliched thing when people say that they felt him in the room with them; but, honestly, there were many times when I could not get the image out of my head of Ash sitting in a chair, bobbing his head back and forth to the stuff we were doing, just digging it. I really think he would have loved it.”

“It’s Ashley’s magnum opus, if you will,” says bassist, Mark Burnash. “It’s bittersweet to hear how good the album is and know that he is no longer with us.

We are never going to be able to hear him sing live again. It’s just echoes from now on.”

“Echoes” is an outstanding production put together in honor of a man much loved in Flint and beyond. It is a testament to the musical talents of Ashley Peacock. Many musicians worked hard to make it happen: Todd Gilbert, Johnny Mason, Mark Burnash, Kris Kress, Billy Gunther, Drew Shultz, Marjie Long, David Eberhardt, Kyle Lipps, Justin Glasco, Taylor VonBrockdorff, Karin Pierson, Chris Estes and Hans Dekline. All proceeds from album sales go directly to the children of Ashley Peacock. Please take the time to purchase, listen to and enjoy a special album created by a caring community of talented individuals in honor of a valued friend.

“Echoes” was released on October 22, 2019 and is available for download at ashleypeacockmusic.bandcamp.com/album/echoes