With its rich automotive history, Genesee County is one area where the appreciation and passion for high-performance, visually-pleasing, head-turning vehicles is unmistakable.

Many spend evenings and weekends tinkering with cars in garages, barns, and driveways on a quest to make them uniquely their own, adding a personal touch to whatever they drive.

Lance Lamson belongs in that category, to put it mildly.

That’s because what the Swartz Creek man, his cousin Kyle Uhelski, and college friend Kurtis Morris have been working on, first in a two-car garage at the home of Lamson’s father and then a polebarn on his own property, for the past five years goes well beyond grabbing a toolbox, lifting up a hood or crawling underneath a car and going to work. 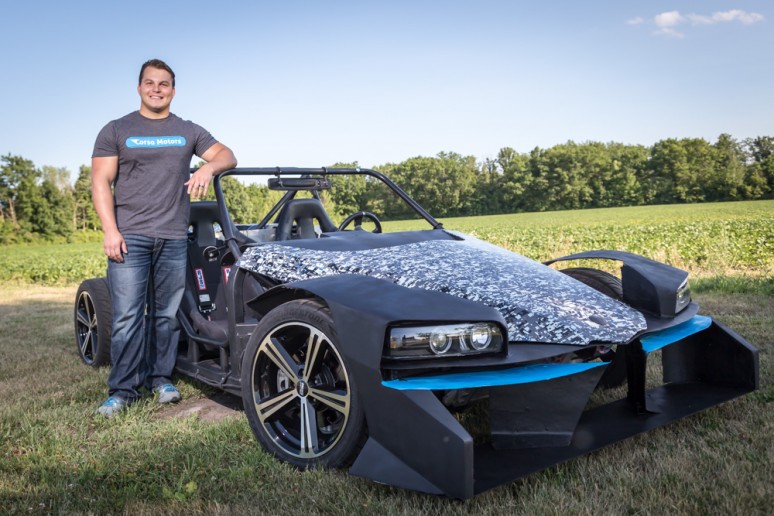 In addition to their regular jobs, the trio have been developing a new, two-passenger custom automobile from the ground-up that promises to deliver a one-of-a-kind driving experience. It’s called The Velox, and the prototype is being brought to life through a company Lamson founded called Corso Motors.

“Our mission is to design and manufacture a modern-day, lightweight performance car which embodies unique styling and modern vehicle technologies to provide an eco-responsible, high-performance vehicle option that is visually unique,” Lamson states on the Corso website. “The Velox, along with its open cockpit, is devoid of all electronic aids like traction control, ABS and stability control, producing an unapologetically raw driving experience, taking us back to a time when cars were built for drivers.”

Judging by the progress the trio has made and reaction when the work-in-progress was displayed in public for the first time, Lamson appears to be getting close to making all that The Velox promises a reality. 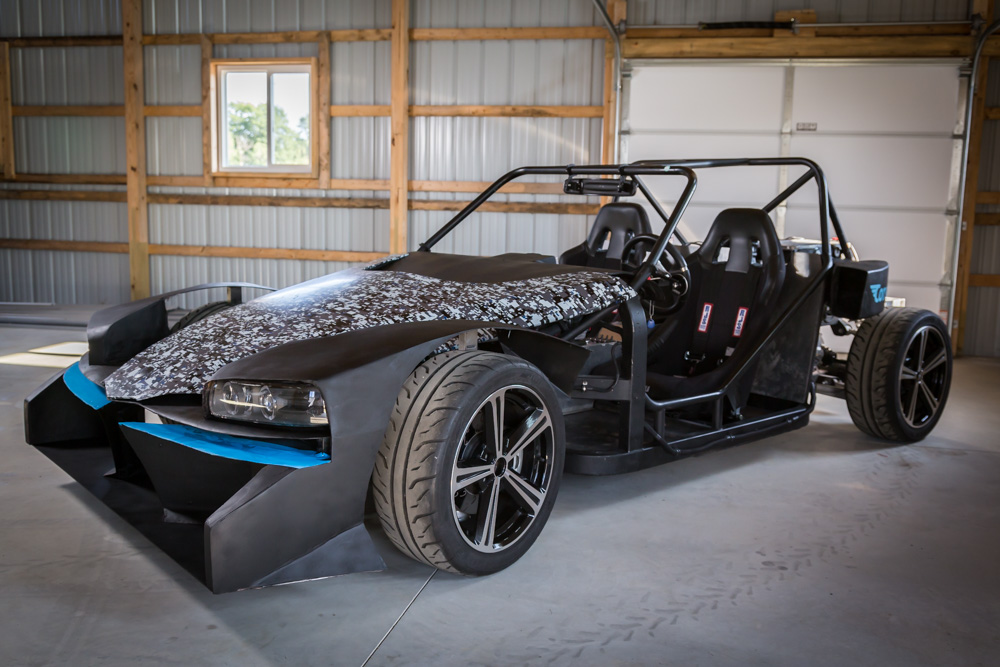 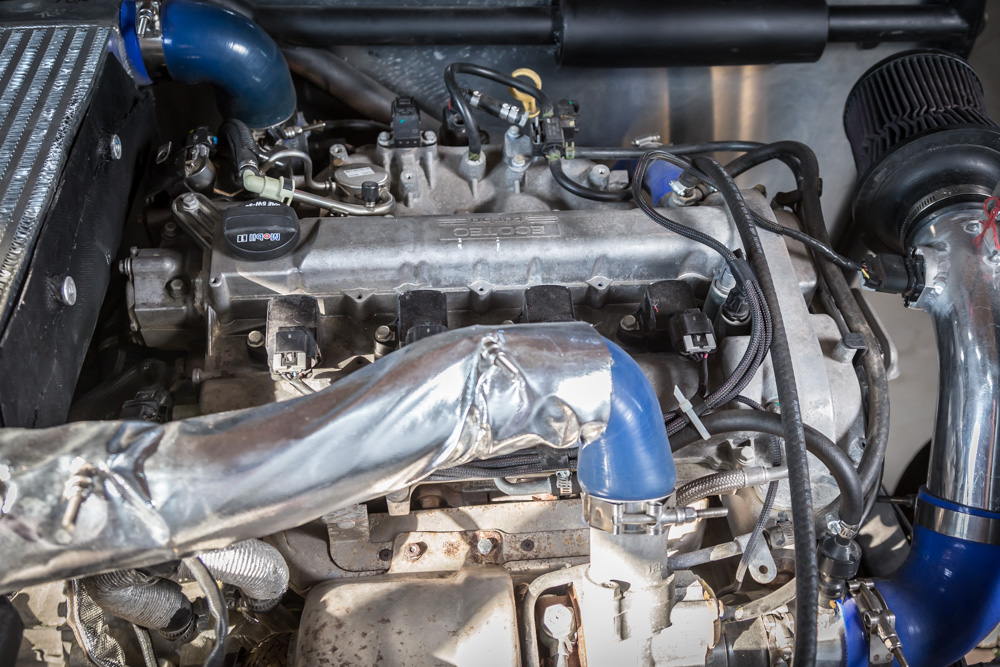 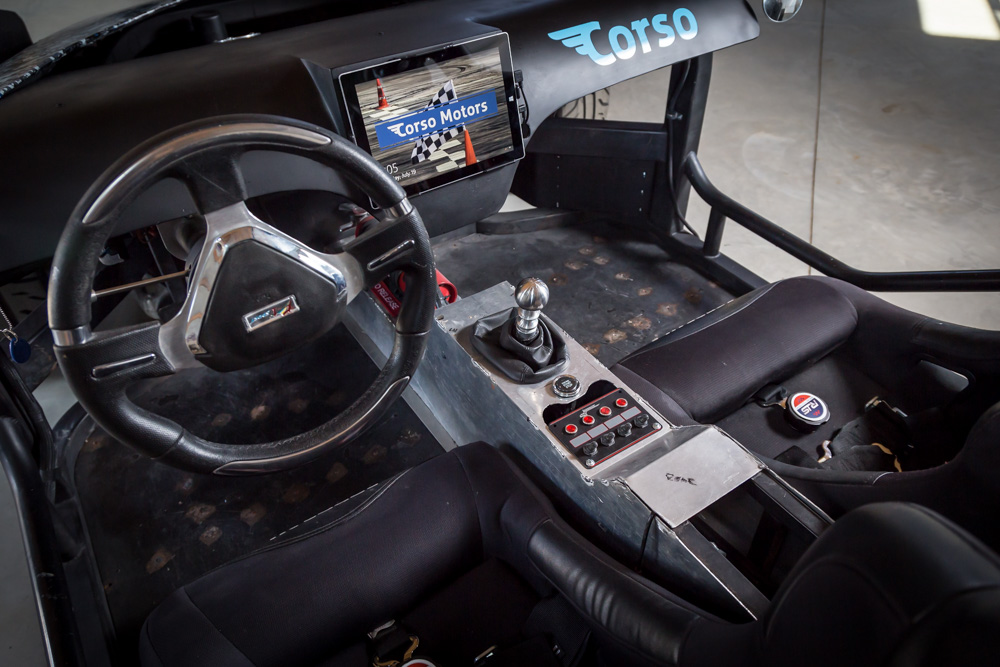 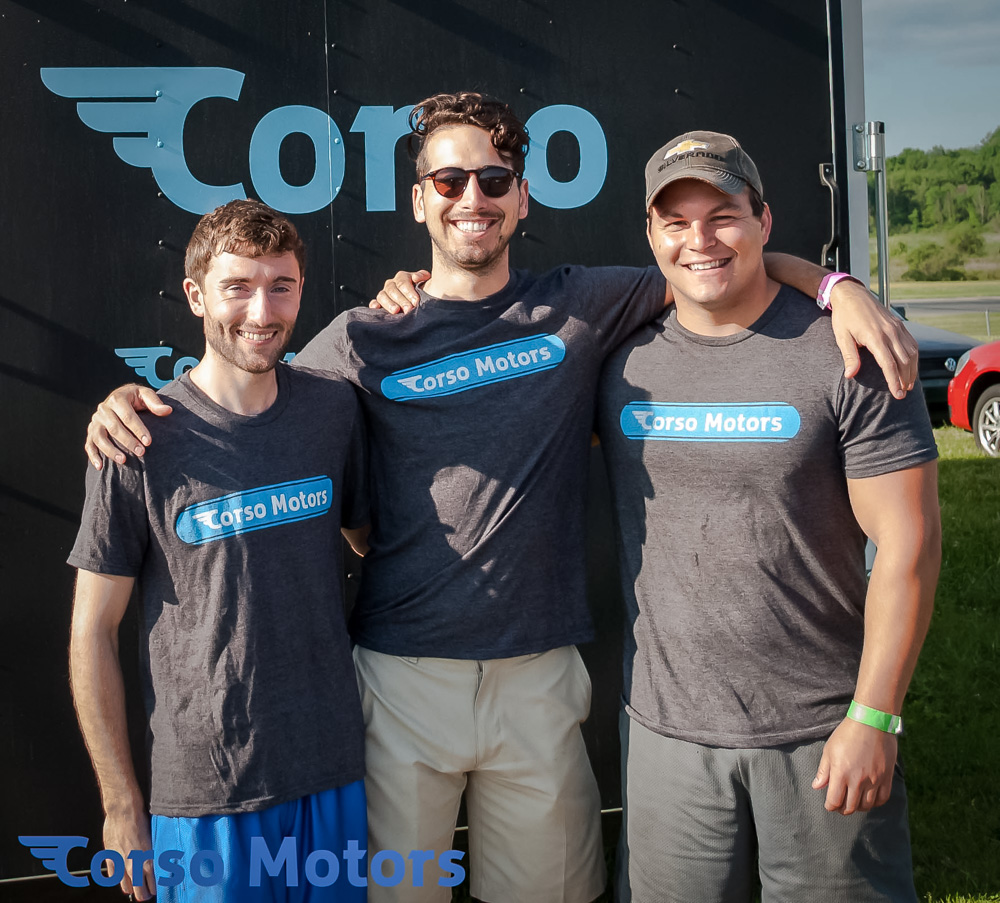 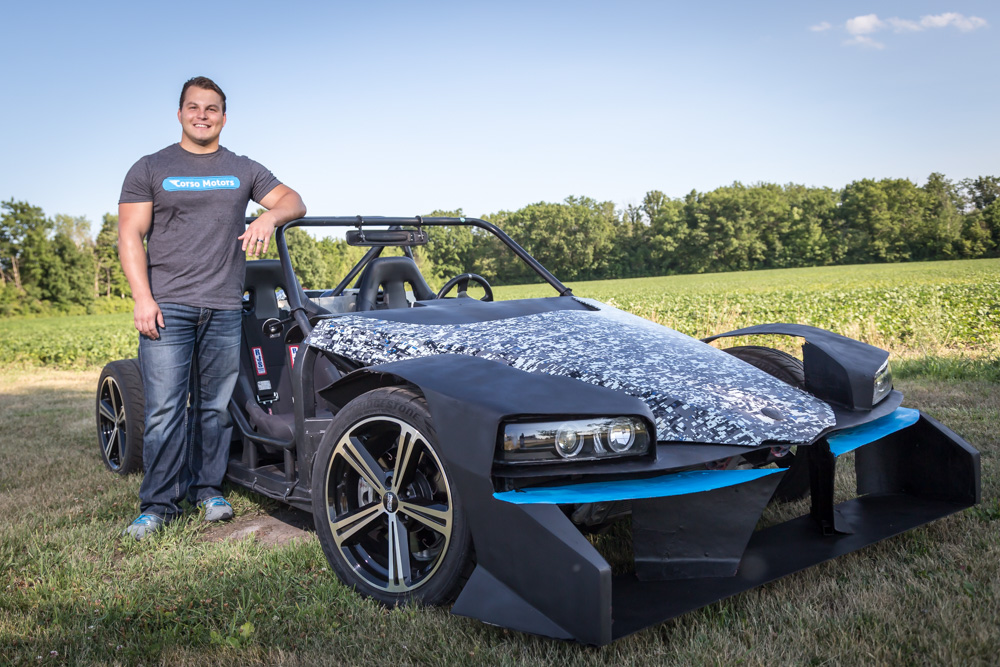 “After five years, this project of building a car that will offer a unique driving experience while also being environmentally friendly and lightweight, has gone from passion to almost obsession,” says the 27-year-old Lamson, who is by day a calibration engineer at the General Motors Proving Ground in Milford. “I have gotten used to the routine, but it’s not like having two jobs, because working on The Velox is a hobby I love and spend five days a week doing.”

That does not mean, however, that the road to this point has been free of developmental potholes. 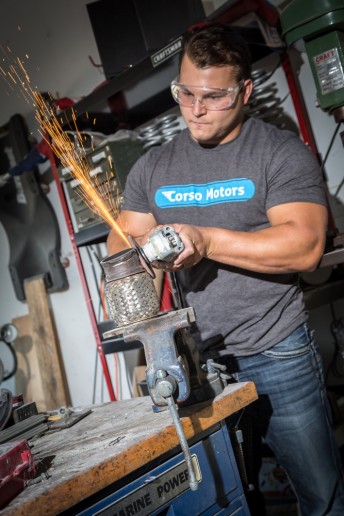 “Being out in my polebarn working on the The Velox is great, but there are times when it seemed like things were not going to come together, and there have been nights it has kept me up, but a project like this is all about patience and persistence,” Lamson says. “It’s about making a little progress each day, breaking the project into chunks, and appreciating the journey, because there is always something more to be done.”

Essentially, The Velox is a two-seat, mid-engine sports car with an engine/transmission combination based on that of a 2010 Chevrolet Cobalt SS and unique custom chassis designed by Kurtis Morris. Designed from the inside out around a selected powertrain, The Velox features a five-speed manual transmission and Ecotec two-liter turbo engine with 300 horsepower. It weighs in at roughly 2,000 pounds which should put gas mileage at least 22 miles per gallon city and 30 highway.

“Really, what we set out to do was make something that was both lightweight and powerful that drivers could have fun with,” Lamson says. “We spent about six months defining the requirements, deciding what suspension to use, what powertrain to build around and things like that. We are not trying to reinvent the wheel, but want to make something different. Building around our powertrain, which is different from how most other cars are done, just allowed us more flexibility throughout the process.”

Lamson could not stress enough the importance of having someone with Morris’ skill set to develop a unique, original chassis which took about eight months to build, an example of why the entire process requires a great deal of steadiness and patience.

“So far, we’ve shown The Velox during events at racetracks in South Haven and Belding, and people we talked to are stunned to find out the chassis was designed strictly in-house,” Lamson says. “While we were students at Lawrence Tech [University], Curtis and I really worked well together on projects, and he was the first person I wanted for the team.”

Uhelski handles the building of The Velox brand. To that end, he does marketing and maintains the Corso Motors web site and social media accounts associated with it.

On Memorial Day weekend, the time finally arrived for Lamson and Morris to don helmets and climb into the still-developing Velox with uncovered seats, and show off what it is capable of under race conditions at Grattan Raceway in South Haven.

Turns out, The Velox performed very well, says Lamson, through more than two hours of hard track driving for the purpose of validating all mechanical systems and only few tweaks were made as a result. 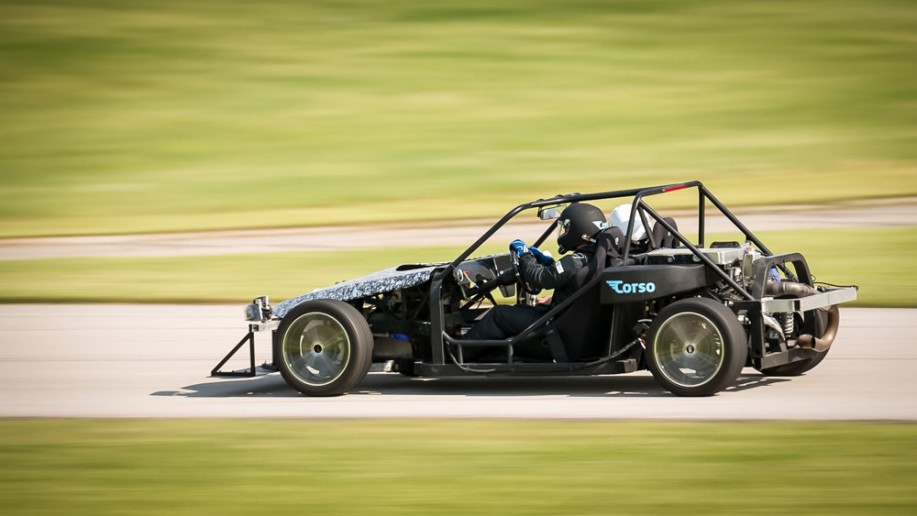 “It’s about making a little progress each day and appreciating the journey, because there is always something more to be done.” LANCE LAMSON

“It’s obvious there is still a lot of body work to do, but The Velox proved to be mechanically sound and ready to go,” he says. “We’re very hard at work now deciding how to fill in the front and sides and what kind of body panels we want, but the feedback we received was awesome, especially at events filled with car guys.”

One of those auto enthusiasts took a particular interest in The Velox when it was displayed and driven in Belding, MI at the Gridlife Music and Motorsports Festival at Gingerman Raceway in June, despite the fact that it was parked next to a new Lotus211, one of the world’s leading sports cars.

“We were a short distance away from the car and noticed that people were gravitating toward our vehicle instead of the flashy Lotus beside it,” Lamson says. “I think part of it was an unfinished design that sparked curiosity. We saw one guy taking about 20 minutes going over it and finally we went over and asked him why he was looking it over so closely. He just said, ‘This car is a work of art.’ Comments like that really make all the behind-the-scenes work worth it and pushes you to next phase.”

The first phase of Lamson’s development as an automobile designer took place in his grandfather’s garage when he was in middle school. “I kind of grew up restoring cars with Grandpa and the first one was a 1971 Firebird we started working on when I was about 14,” Lamson recalls. “We spent a lot of time over the next three summers bringing it back with my grandfather showing me how to fix it. It was thrilling when we finished and sold it. We continued that pattern of buying a wreck and fixing it up. It was a really cool process for me because every car presented different challenges to overcome.”

After graduating from Kearsley High School and earning a mechanical engineering degree from Lawrence Tech, Lamson began working for General Motors in 2010 and decided to try the automobile restoration business on his own.

The process was still enjoyable for Lamson, but the results were not profitable.

“That’s when I knew I had to do something else with my passion for car development,” he says. “It actually hit me while I was working on a Camaro and the engineering side of me began to think that I could design something even better that was lighter, faster, and more powerful. Five years later, here we are.”

Lamson says he already has potential buyers asking about price and hopes to eventually set up a production system on his property to make 8 to 10 models a year.

“I’ve always treated The Velox as a business and have spent a lot of time promoting it and eventually would like to start selling what we’ve worked so hard to make happen,” he says. “We are probably another 18 months from that.”

Anyone interested in checking out The Velox will not have to wait long, however. It will be featured at Back to the Bricks in Downtown Flint on August 20.
Photography By Eric Dutro & Provided by Stanced