Appointed to the position of Deputy Chief of the Flint Fire Department in November 2018, Carrie Edwards-Clemons has seen and done it all during her years there. She is the highest-ranking female in the Department’s history and the first female to be appointed deputy chief. Born and raised in Flint, Edwards-Clemons has been with the FFD since 1999. Growing up on Flint’s north side, she graduated from Northwestern High School and the University of Michigan-Flint, and earned a master’s degree from Southern Columbia University.
Edwards-Clemons always wanted to pursue a career in which she could help others. When the department was hiring a decade ago, she was a divorced mother of two young children. “I wanted to take care of them on my own,” she says. “The job enabled me to do that; it was a blessing.” As a firefighter, she worked a 24-hour shift and then was off for 48 hours, giving her time to not only be a mom, but also to obtain the education she needed to move up the career ladder at the fire department.
After working as a firefighter/EMT, Edwards-Clemons trained to become a paramedic, which she did for a number of years. “All the while fighting fires,” she adds with a grin. She has held the positions of Provisional Suppression Sergeant, State of Michigan Fire Inspector, Instructor Coordinator, Firefighter Instructor and Hazardous Material Technician. “I’ve never stopped training or learning something new,” she says. 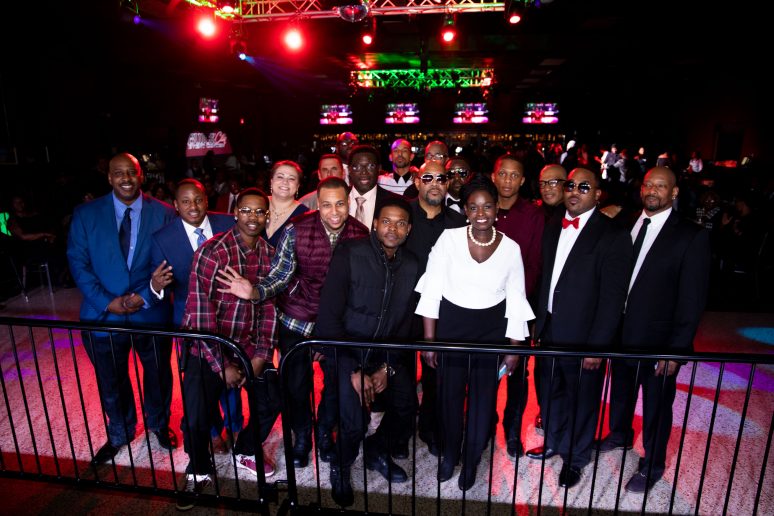 In December, the Society of Minority Firefighters hosted a
celebration in Edwards-Clemons’ honor at Buick City Event Center.

As Deputy Chief, Edwards-Clemons is now responsible for overseeing and providing training at the Fire Department, as well as grant-writing. She is also in charge of community and Department programs. “I have a full plate,” she laughs, “but I love it.”
Reflecting on her years with the fire department, Edwards-Clemons vividly remembers her very first fire, which occurred on her first day at Station #4 on Flint’s north side, which is no longer operating. “It was the hottest fire!” she remembers. “It was crazy.” But it is also where she learned about teamwork after another firefighter asked her, “’Do you have me?’ I answered, ‘I guess I do!’ We were a team. He was depending on me. I didn’t quit, but I asked myself: ‘What have I gotten into?’ Then, I went home and looked at my babies and remembered they were the reason why I was doing it. It was hot and it was crazy. But I did it.”
Sometimes, firefighters see things that someone should never have to see, such as a person who is DOA. The first time Edwards-Clemons saw this was quite shocking to her. “I was a church girl,” she says, “I had never seen anything like it, a body burned beyond recognition. It made a huge impact on me. I was just trying to hold it together and then, I saw that my partner was freaking out, too,” she says, which helped her realize she wasn’t the only one feeling that way. “It helped me tremendously.”

“We are thrilled to advance Carrie to this position. Her considerable
experience in EMS, Fire Prevention, grant-writing, project management,
training and development, and community relations will make her a
tremendous asset to our public safety team and will best position the Department to meet upcoming challenges.”
Fire Chief Raymond Barton

What Edwards-Clemons loves best about her job is going out into the community. “That is where my love is,” she says, “informing the public about fire safety, career fairs and working with people.” She also loves working with and training the firefighters. “The greatest thing about firefighters is they have a heart for service,” she admits. “It’s like a big family. They cook together, do everything together, and they sometimes have issues just like a family. But when the tone goes off, all of that gets left behind and we are a team with a job to do.”
Edwards-Clemons will teach “Camp Fire” Girls Camp beginning in June (June 24th-28th, 2019). This camp will encourage girls to consider firefighting as a profession. “As a female firefighter, you have to do things a little differently because we don’t have the brute strength a male has,” she reports. “I get a lot of questions from girls about doing a camp like this. It sparks their interest.” Although firefighting is a male-dominated profession, there are five women working with the Flint Fire Department. “And we just hired one more!” she exclaims. 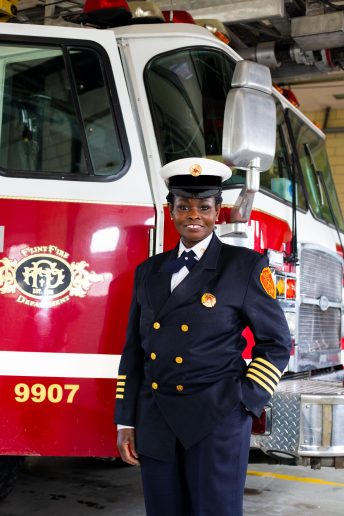 A special event that Edwards-Clemons looks forward to every year is Firefighter Appreciation Day, which is held during Fire Prevention Week when awards are given to those who have gone above and beyond the call of duty. “We want to acknowledge that,” she says. “We have a big barbecue and extend invitations to the retired firefighters, too. They appreciate coming back and I love seeing them. This was their home and without them, I wouldn’t have stayed.”
Edwards-Clemons says her job’s biggest challenge is learning and teaching others how to move past trauma, and how post-traumatic stress affects firefighters more so than most jobs. “Every call we get is somebody’s worst day,” she shares. “Firefighters put their lives on the line every day.”
As Deputy Chief, her top priority is making sure the firefighters get good training and the Department has properly working equipment. “What I do enables the firefighters to better do their job,” she reports. “I do everything I can to make their job easier. They know I’ll work for them.  I respect them and they respect me.”
In her spare time, Edwards-Clemons enjoys her family. Two of her children have followed in her footsteps and are Flint firefighters, sons Lawrence Edwards and Daniel Edwards. She loves spending time with her very active 17-year-old daughter and her grandchildren. She attends church at Ebenezer Ministries. “That is where I get my support and it gives me the strength to go on,” she shares. Weekends are reserved for family and they all get together for Sunday dinners at her house.

“I do everything I can to make the firefighters’ jobs easier.
They know I’ll work for them. I respect them and they respect me.”

In December, the Society of Minority Firefighters hosted a celebration in Edwards-Clemons’ honor at Buick City Event Center. “It was fabulous!” she exclaims. “The firefighters put it on for me and the Buick City Event Center donated the facility. I just wanted to cry. It was amazing.”
Edwards-Clemons’ journey with the Flint Fire Department has been incredible, as well, and she has received a lot of community support for her new position. “The community has supported me since Day One!” says the Deputy Chief. “They have always been in my corner. I always wanted a job that allowed me to help people and give to the community.
“This job is about other people – that’s what I love about it. It’s been an amazing journey! And, I’m not done yet. There is still so much to do!”

Share. Twitter Facebook Google+ Pinterest LinkedIn Tumblr Email
Previous Article“It’s a Different Kind of School” A Conversation with Eric Lieske, CEO Flint Cultural Center Academy
Next Article “Ring of Silence” A Film That had to Be Made