Summer is bursting with vibrant colors, smiling faces and an array of fruits and veggies at the Davison Farmers Market, located at the corner of Irish Road and Court Street in Davison. There are tempting displays of rich desserts, baked goods, cheese and farm fresh eggs, and so much more. The air is filled with the wonderful aromas of food offered by four different eateries. My City Magazine spent a day at the Market wandering around and tasting the delicious food at Mama’s Tacos And More, The Green Olive Tree, Egyptian Koshery and Chatterbox Cafe. 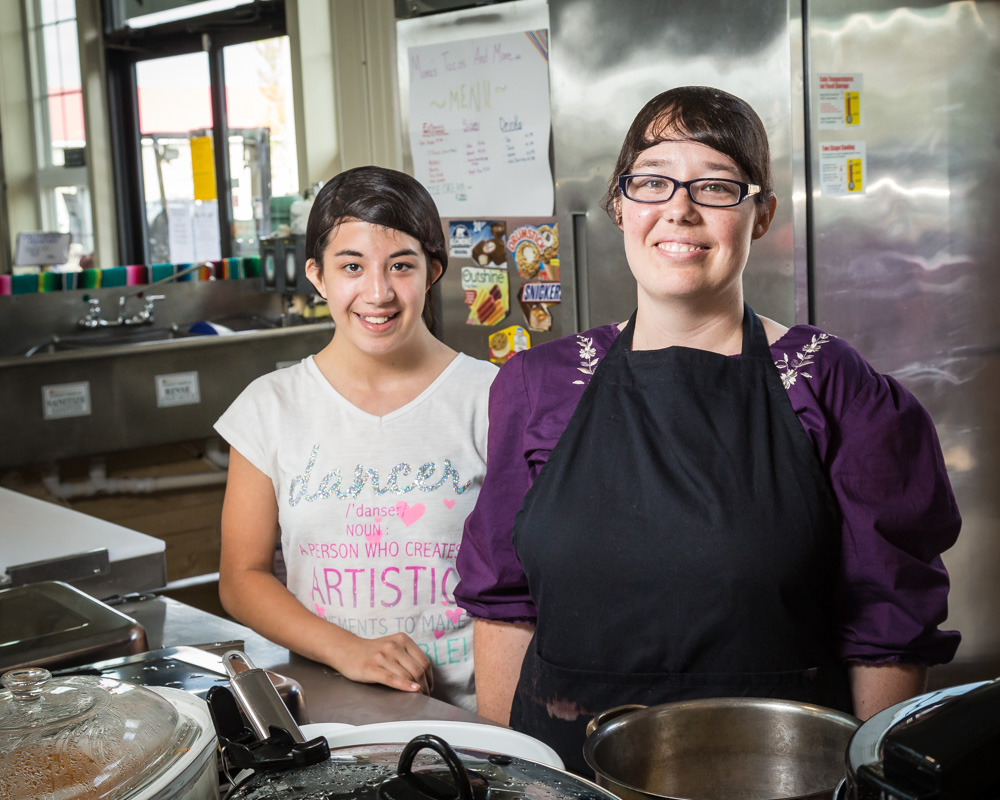 Dana Rodriguez is the owner of the Mexican takeout eatery, which opened in June. When a spot opened up at the Davison Farmers Market, she jumped at the opportunity to share her love of food with the community. “I love cooking and baking!” Dana exclaims, “and I love this market.” With the help of family members, including her daughter Juliana, the Rodriguez family brings the taste of a Mexican fiesta to the Market. “It’s a family thing,” she adds with a smile. 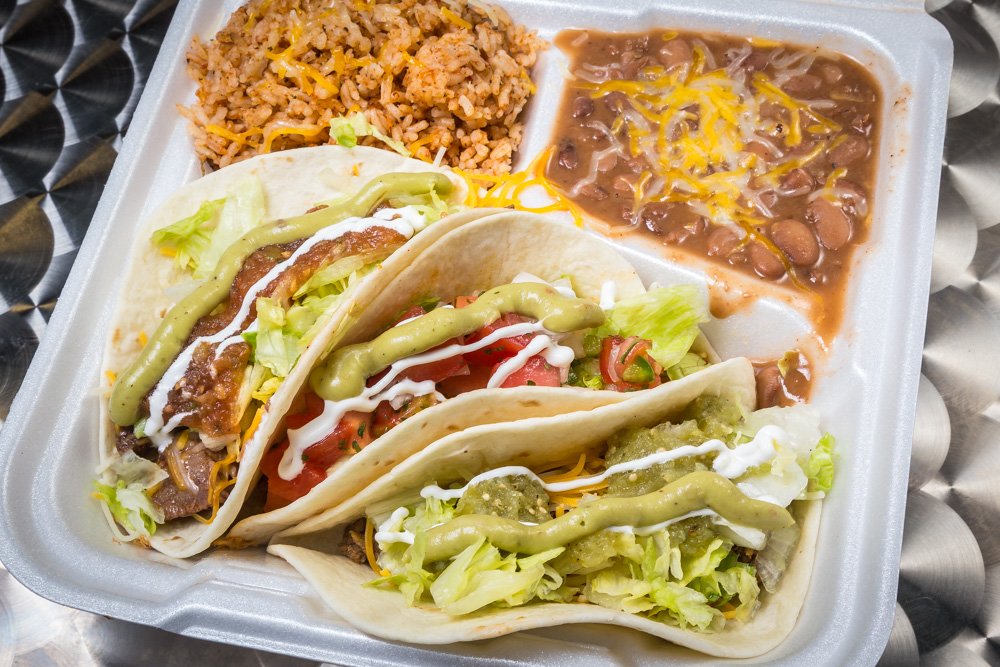 Mama’s offers soft-shell tacos filled with three varieties of meat: carne guisada – steak with gravy (which smells out of this world!) – ground beef, and chili lime chicken. Tacos are topped with cheese, lettuce, a choice of three homemade salsas and sour cream. “We do everything homemade as much as possible,” Dana says. Also on the menu are burritos, nachos and taco salad. Meals are served with sides of homemade beans and rice.

The tacos are the bestseller, and although it’s new at the Market, Mama’s has served about 100 tacos a day since they opened. Dana says she had to laugh at one customer, a big guy, who said when he ordered, “I’m not really hungry, so I’ll take just six tacos.”

According to Dana, the Davison Farmers Market is a great place to be, and the people are very friendly. She plans to expand the menu and will soon offer some tempting desserts. “I’ve cooked all my life,” Dana says, smiling. “I love to cook and bake. It’s my passion.” 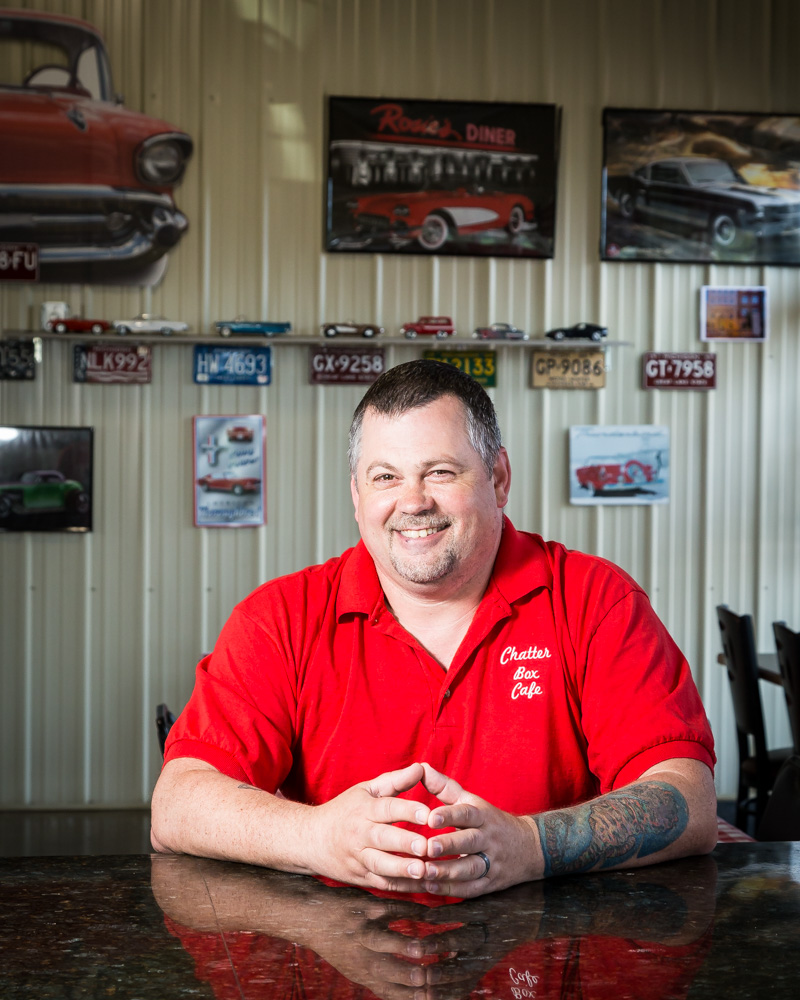 This inviting, sit-down diner has red-checkered table covers and a warm, friendly atmosphere. Owned by Jeff Barnella, the diner has been at the Market since it opened four years ago. On the menu are 12 fresh and delicious sandwiches, seven different wraps, four yummy salads, Coney dogs and soups. Sides include, potato salad, creamy coleslaw, homemade mac & cheese, and loaded tots – tater tots slathered with cheddar cheese sauce, bacon and sour cream. “Everything is made from scratch,” the proud owner says. “It’s a place where people come to eat and meet, and the food is not just fresh, it’s market fresh,” Barnella adds.

The Chatterbox also serves a variety of flatbread pizzas. “I sell out all the time,” Barnella says. They also make a variety of smoothies and a cool root beer float when it’s hot outside. Every couple of weeks during the summer, he will bring a grill outside to barbecue brats, hot dogs and burgers. The Cali Salad is a cool, summer favorite made with turkey, cranberries, almonds, feta cheese and raspberry vinaigrette. Barnella makes delicious homemade soups such as tomato and roasted red pepper, and pulled pork bean soup. His pulled pork BBQ sandwich has won many awards. 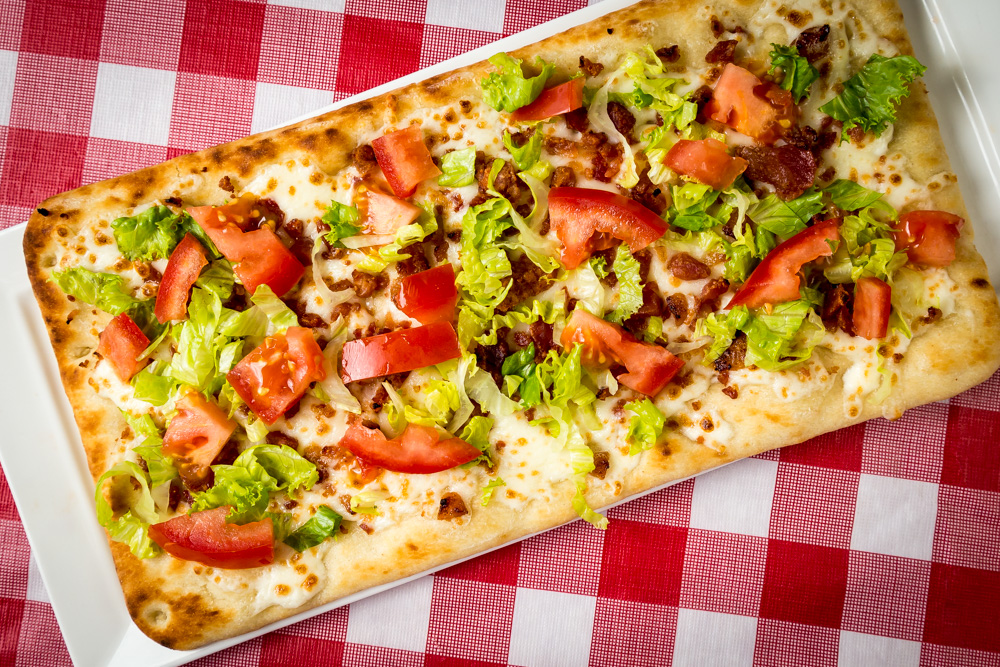 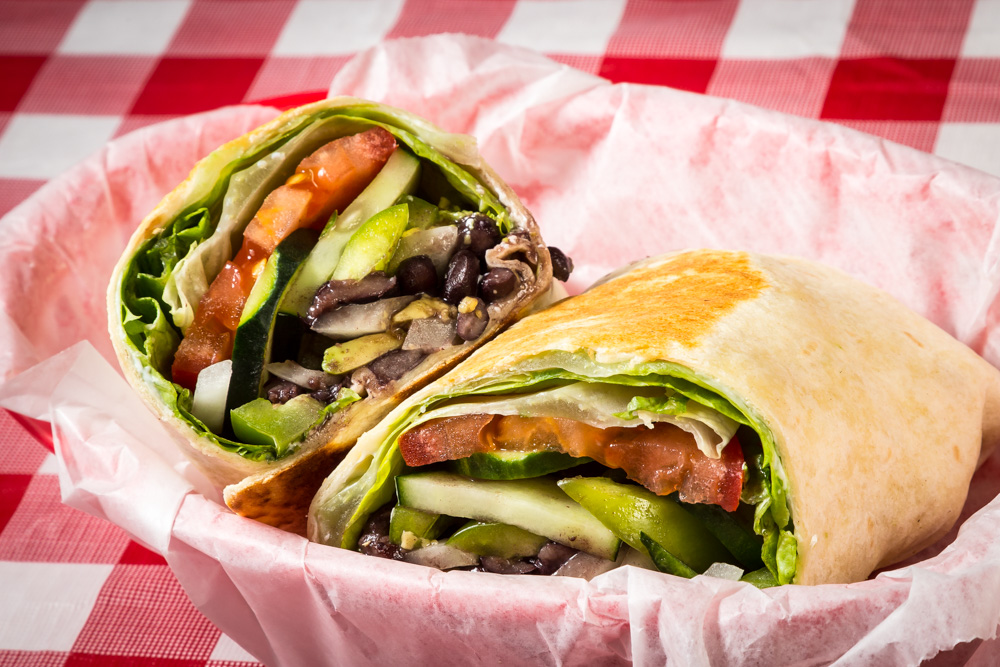 How did the Chatterbox Café get its name? Barnella recalls that when he was a little boy, his grandma would say that he was always talking and would never shut up, and called him a little chatterbox. “I still don’t ever shut up,” he admits. He loves his location at the Davison Farmers Market. “It’s a lot of fun and you meet a lot of people,” he says. “It’s a close-knit group of vendors and we all support each other. If we run out of something, we just walk a few steps down and grab what we need. I get everything from the market; I support it fully.” 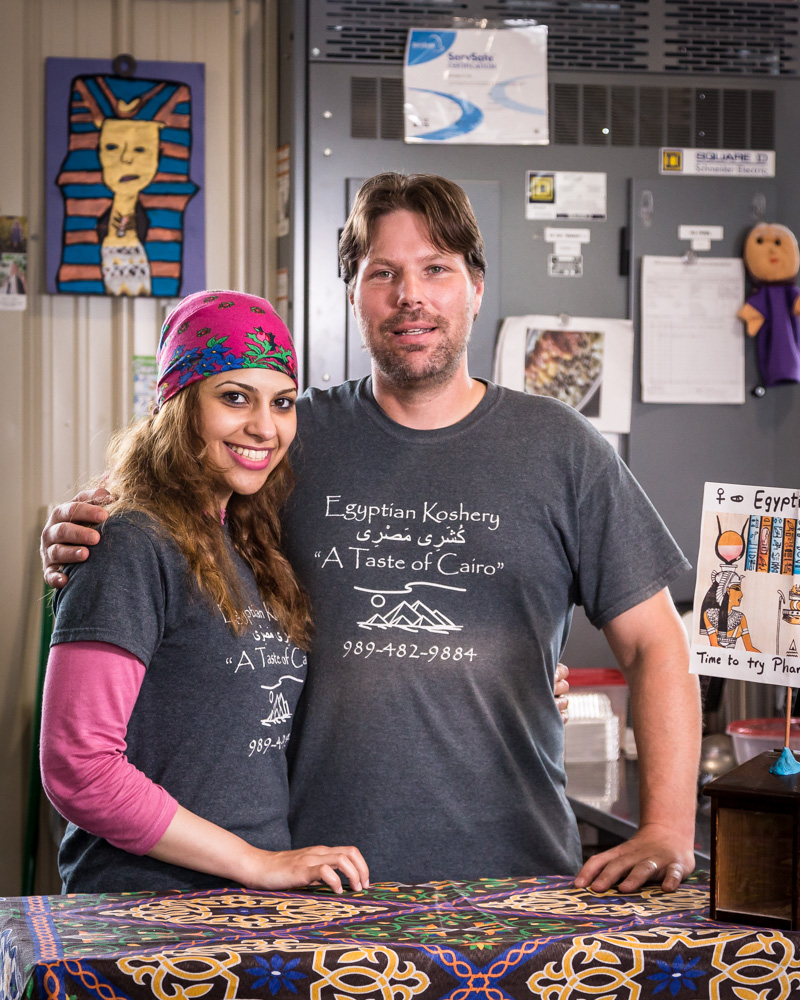 Dale Erdman and his partner and spouse Riham Kotb have brought a taste of Egypt to the Davison Farmers Market – and customers are raving about it. The menu is very simple: koshari (also spelled koshery), lentil soup and a vegan apricot pudding. But it’s the koshari that has everybody talking. “Koshari is one of the most popular dishes in Egypt,” Erdman explains. “It’s Egyptian street food.” The dish consists of rice, macaroni and lentils layered in a bowl, topped with a spiced tomato sauce, garlic vinegar, and garnished with chickpeas and crispy fried onions. “It’s Riham’s recipe,” Erdman says, “but we both cook it.”

Erdman and Kotb met while taking a Spanish class. “She cooked koshari for me,” he remembers. “I immediately asked her to marry me – the koshari was that good.” When they traveled to Egypt together to get married, Erdman got another taste of the popular street dish during their visit. “I told Riham that we had to bring this back home and sell it. Her mom cooked the best food I’ve ever tasted.” 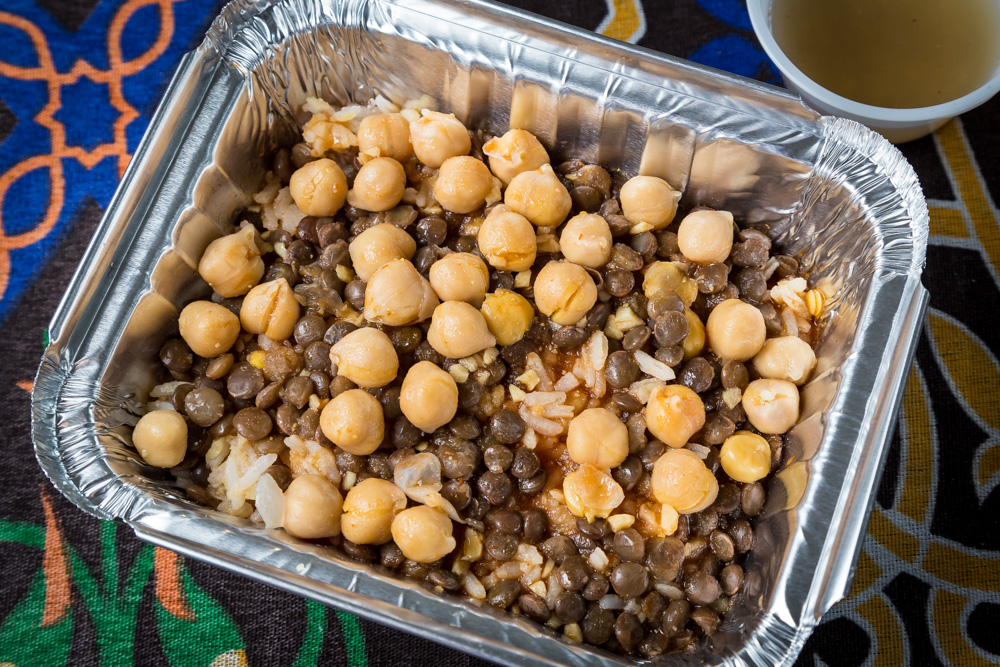 The lentil soup at Egyptian Koshery is made with carrots, potatoes, onions, green onions and lentils pureed with Egyptian spices. “It’s awesome,” the owner boasts. “It’s very popular in the winter but people have been asking for it, so we brought it back for the summer.” The apricot pudding has also become a big hit. “It’s vegan, which is rare,” says Dale, “and it’s refreshing and delicious!” 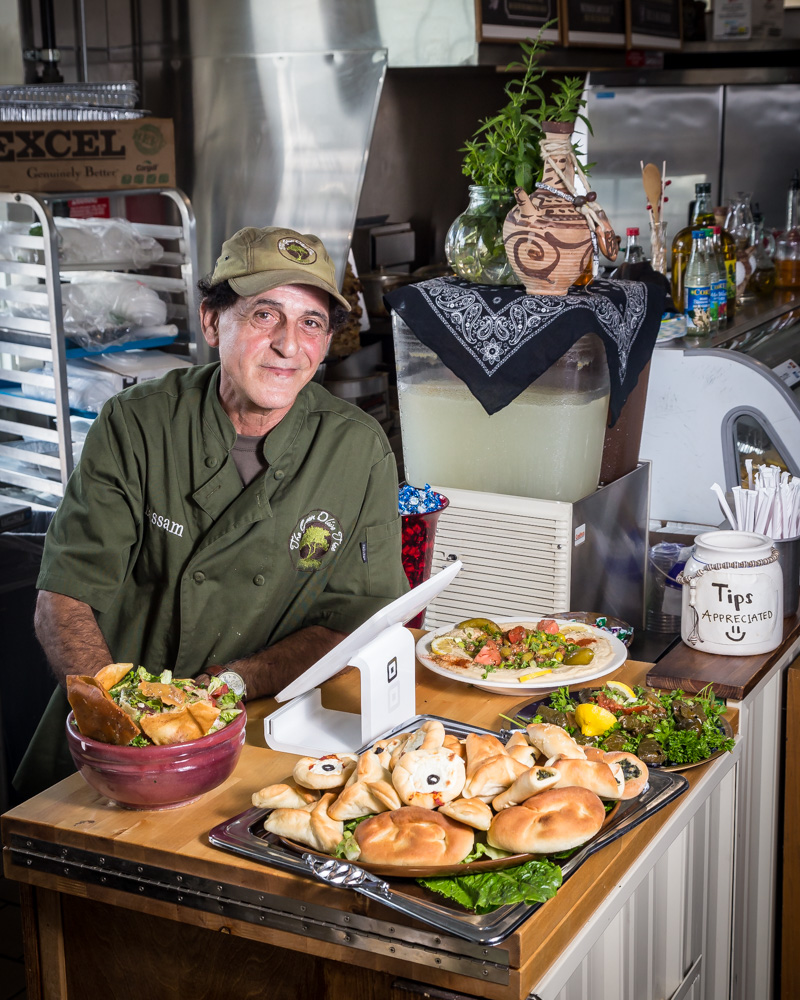 A refreshing, hand-squeezed lemonade sweetened with honey and topped with fresh mint, is the perfect way to start your meal at this Middle Eastern/Mediterranean eatery at the Market. The food is made with love by owner, Bassam Abushakra. Known to only grow in Jerusalem, the mint for the tea is from his backyard. The food at The Green Olive Tree can only be described as fresh and fabulous. “I grew up with this food,” Abushakra says. “It is the food of my family.”

On the menu are Middle Eastern favorites including fresh chicken shawarma sandwiches; fantastic falafel wraps; meat and veggie-stuffed grape leaves; spinach, meat and cheese pies; hummus and tabbouleh salad, to name just a few. “Everything is homemade and the dressing is a family recipe,” the owner says. “I make it from the bottom of my heart; it makes me so happy to watch people eat my food.” He does it with the help of his 77-year-old aunt, Ida Raffoun, who helps make the meat and cheese pies, cookies stuffed with dates, baklava and lady fingers, among other dishes. 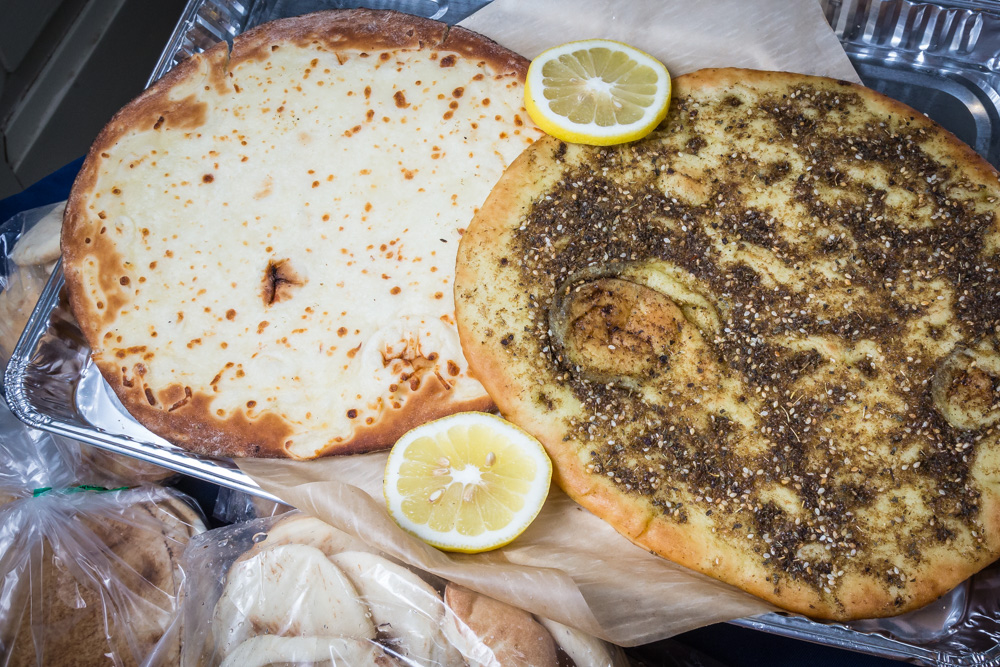 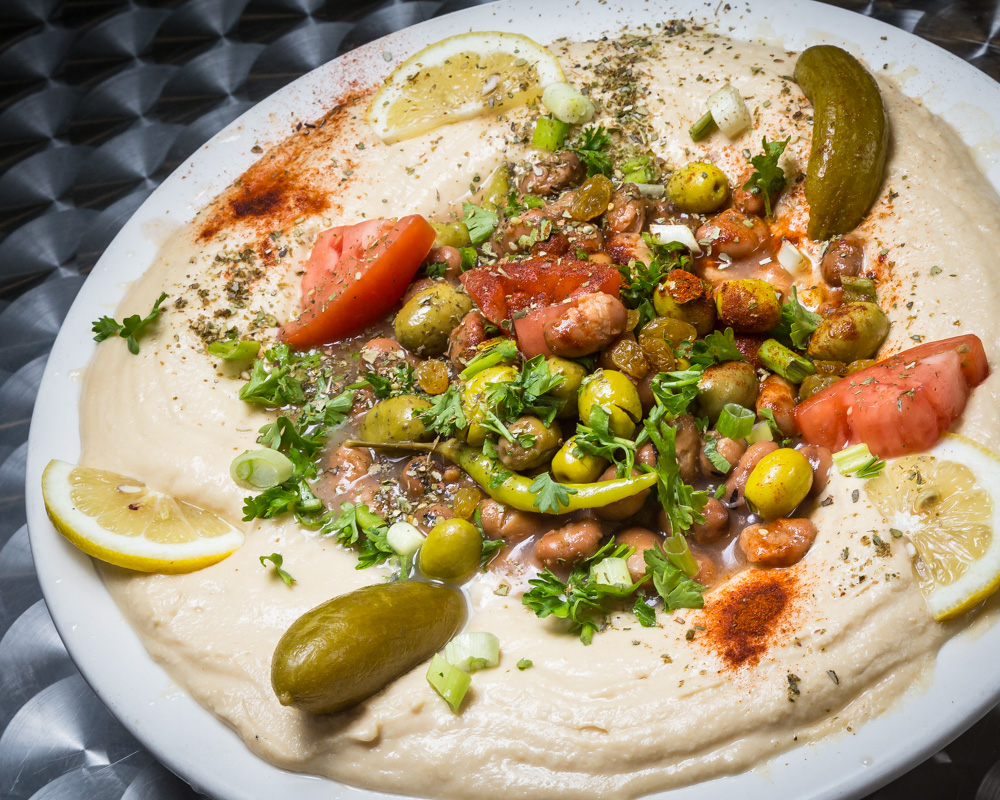 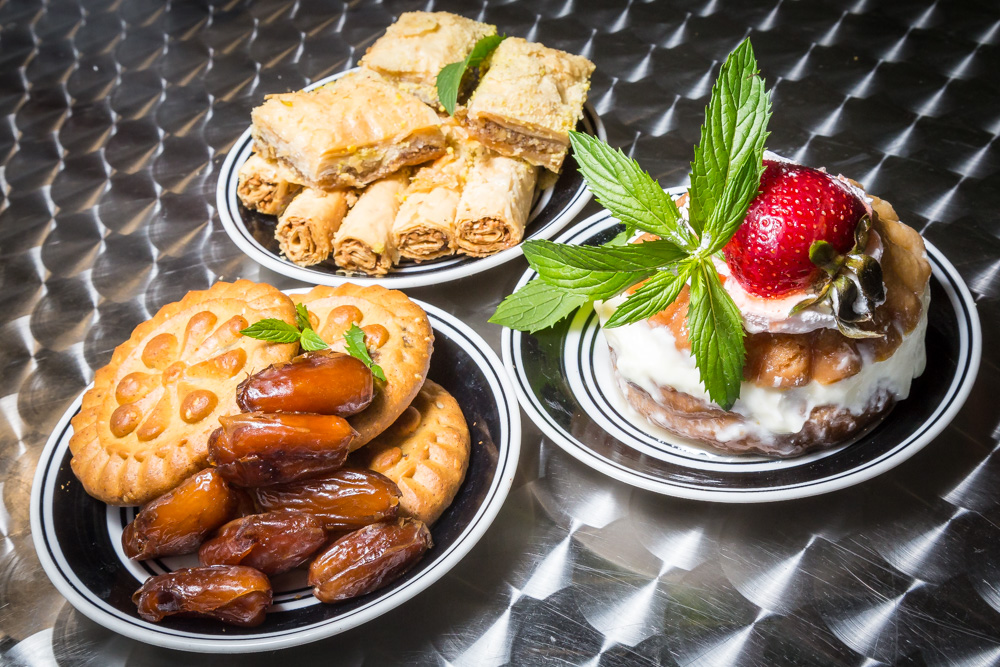 More delicious menu favorites include: meat shish kabob, shish tawook (grilled and marinated chicken breast), and shish kafta (grilled beef/lamb mixed with parsley, onions and spices), all of which are served over a bed of rice. Another customer favorite is fatoosh salad, but the shawarma sandwiches are the top seller.

Abushakra grew up in Nazareth, Israel and started helping out at his dad’s restaurant when he was just ten years old. He started washing dishes, but really wanted to learn to cook. “When I see all the dishes all shiny and organized, I will think about giving you my recipes,” his father told him. “After ten years of doing that, I got blessed,” he remembers. “He finally taught me to cook.”

What is the secret to Abushakra’s success? “The food is always the same,” he smiles. “The recipes are in my heart.”