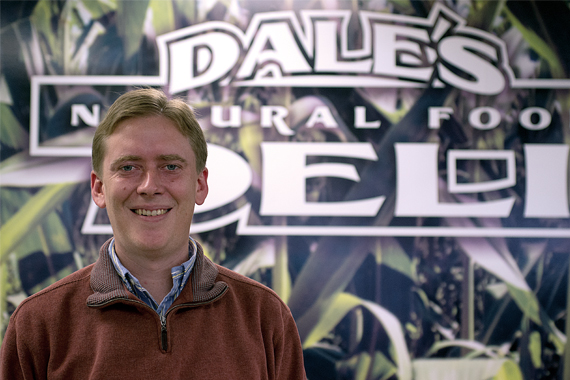 Who remembers walking into Dale’s Natural Foods when it was located in Downtown Flint, being greeted by the delightful aroma of freshly made caramel corn, caramel apples and an array of sweet candy? Those were the good ‘ole days, according to Drew Wolfe, third generation manager of Dale’s Natural Foods, now located at the Somerset Town Centre on Miller Road, but the day is still good when you can get tasty, wholesome and fresh foods at this local icon.

Dale’s Natural Foods has been serving area residents since 1947. When Drew’s grandpa, Dale, opened the store, he sold whole grain breads and wheat germ oil. Dale’s son, Don, took over the store in the early 80s. A decade later, the demand for natural foods began to really take off and Dale’s became more popular than ever. “Dad saw the writing on the wall,” said Drew proudly, and he planned for the increased demand. In 1987, Don relocated the store from Downtown Flint to Miller Road, where the proprietors have found it necessary to expand twice since then.

Other changes include the closing of the Downtown location in 2001, and adapting the menu of house-made dishes to include healthier options, which draws a large and loyal lunch crowd to the renowned vegetarian deli. Don, who was beloved by his customers and all who knew him, passed away last year after a lengthy illness. “He touched so many lives over the years,” Drew said sadly. “He enjoyed helping people, and people were always asking him for advice.” Drew’s mother, Jean, is still involved in the business behind the scenes. “She’s what makes everything come together,” says Drew.

According to Drew, last year was the store’s busiest yet, a monument he attributes to his hardworking staff. “We have a great team here!” he exclaimed. Drew said six of the employees have been at Dales for more than 20 years. “Our success has a lot to do with their dedication,” he added. The store offers a large variety of nutritional supplements and vitamins, which are the most popular items sold. Dale’s also offers a full line of 100-percent-organic food and free range beef and chicken, as well as a large selection of organic fresh vegetables. The store sells a large variety of gluten-free foods, which are in high demand, according to Drew. Another customer favorite is the fruit and nut section, which Dale’s has offered for 50 years. “We have a good supplier and the fruits and nuts we sell are of the highest quality,” says Drew. “You can taste the difference.”

But what many customers love is the full-service vegetarian deli and juice bar. Dana Goode has been the cook for 25 years. “It’s amazing what she can do, making healthy food taste so good,” says Drew. The deli offers soups and salads made fresh daily from scratch, along with a hot vegetarian entrée of the day. When My City Magazine visited, the entrée (which smelled delicious) was Herbed Linguini with Goat Cheese. A tempting variety of tasty gluten-free and sugar free desserts are also displayed at the deli counter, and the store sells whole grain breads baked by Crust in Fenton.

As for the sweet treats, it didn’t take much persuading to get the secret recipe for the most delicious caramel apples you ever tasted, made by Don Wolfe back in the glory days. The secret, Drew said with a smile, is that the highest quality peanuts were ground up with graham crackers, giving the luscious, homemade caramel-dipped apples (fresh from the Flint Farmers’ Market) their unique deliciousness. “I wish someone would make caramel apples with that recipe,” Drew laughed. “I’d buy them, even though I’m dedicated to healthy foods!”

Drew and Jean work hard to continue providing the high-quality, natural products that Dale’s has become known for. With Don’s passing this past year, many customers were worried that Dale’s would close its doors. “I can assure you that we have no plans to close,” Drew said. “This is such an interesting business,” he exclaimed. “I wish my grandpa could see what it is today.”

Are you interested in purchasing photos from this story? Go HERE and select the “Dale’s Natural Foods” category.