Since 1981, the sport of paintball has been exploding in the United States. Its fast-paced, exhilarating nature has caught the attention of many Flint locals, some of which have created teams that compete all over the country. CRU Paintball has brought this fun, unique sport to the area, and also provides a venue for many for local and semi-local players. Driving by its location on Clio Road, one would think it resembles a Kmart store – which it once was! Repurposing the old building has given the owners the space to create lasting teams, practices and competitions. The 60,000-square-foot indoor/outdoor facility is used for both competitive and recreational events.

CRU Owner, Chris Dixon, opened the business in 2008 after hosting paintball games for youth groups every Sunday in his own backyard. “One Sunday, we had 85 people out there,” Dixon says. “We knew we had to do something different, so we looked into what it would cost to build our own place.” In addition to being his own boss, he also felt that helping the kids was a more important perk. “We wanted to keep them occupied with something that wasn’t troublesome,” he explains. “It’s the way I felt led to keep going.” At the time, the youth group players ranged in age from 11 to 19 years old. Parents began joining in, like a father and son playing together, so all ages were welcomed. 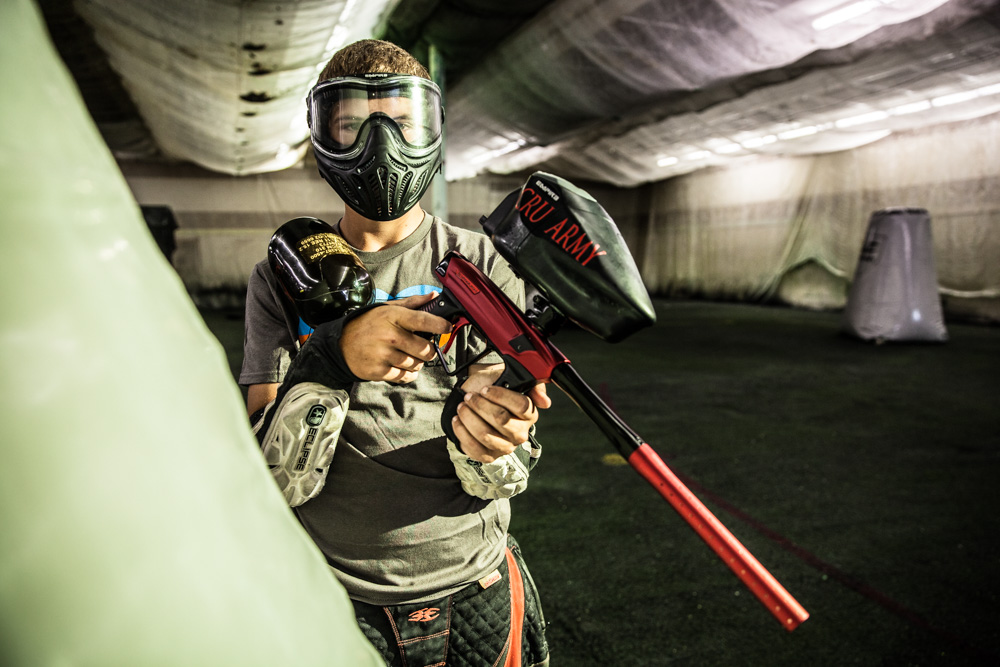 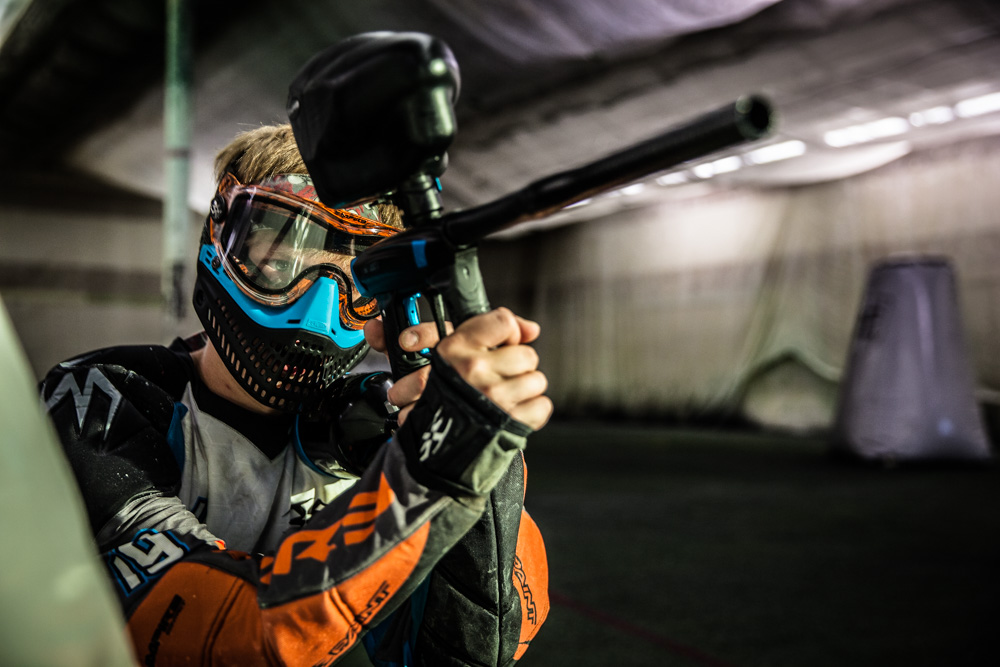 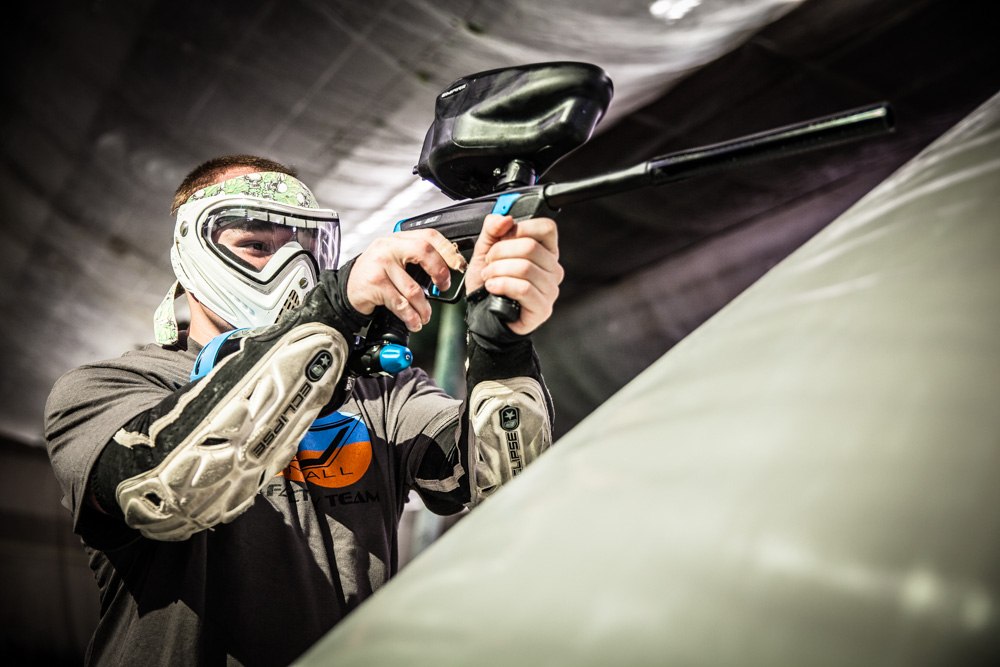 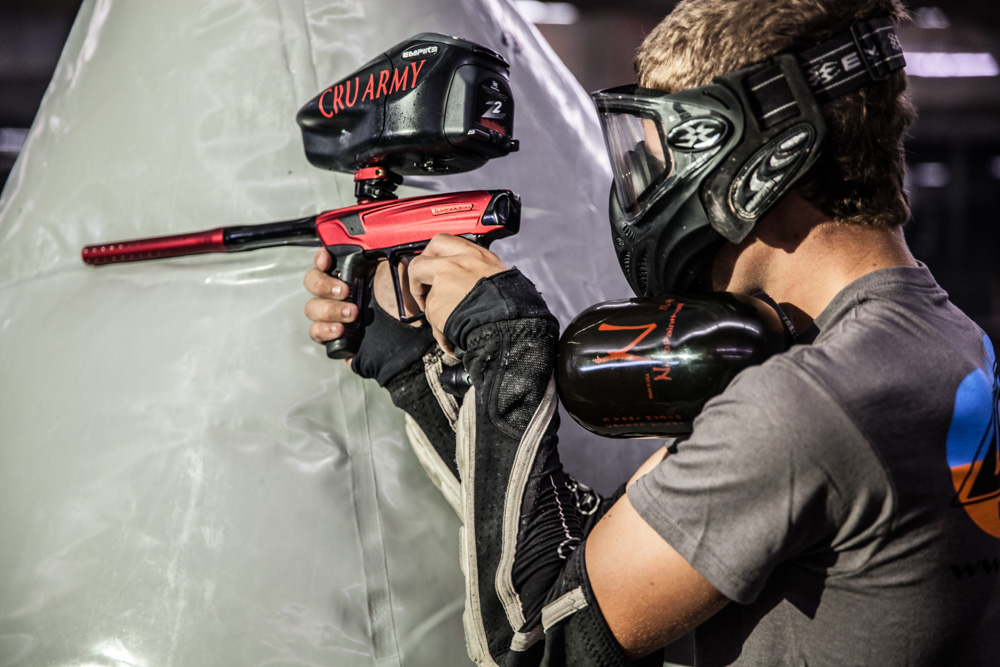 Loren Adams, a Flint City CRU player says, “Chris is a great guy and will help you with whatever you need.” Even though it is a business, Dixon is very warm and inviting to players, old and new. Always cracking jokes, there is quick-wittedness in their conversations, mixed with constructive criticism about technique from the sidelines.

Before a practice, the players suit up, fuel up and warm up – jogging around the perimeter of the field and doing drills to wake up sleepy muscles. Very strategic plans are created before they even enter the field, so they know where each one will be once the game begins. A typical game includes teams of five, who take a position at starting points on opposite sides of the field. The ref begins the countdown and yells, “Go, go, go! ” Then, it’s chaos! The cha-chung of the markers (guns) releasing air echoes around the field, and the pitter-patter of the paintballs ricocheting off bunkers adds to the intensity. Rounds are usually relatively short – when competing, they play to earn the most points in five minutes. “No doubt,” Adams adds, “the best part is the rush right before the game starts, and being able to win games that you didn’t expect to win.”

Bunkers on the field provide obstacles for players to maneuver through, such as the sinuous “snake” bunker, and the aptly named “Dorito” and “tower” bunkers. The end goal: capture the flag, in essence, and bring it to the giant, A-shaped bunker – without getting marked. Most often, when a team captures the flag, the other team is already out; the flag serves as just a formality. There are different bunker layouts for each tournament. Depending on the league, air pressure in the markers can be changed to adjust the paintball velocity. The two different fields – tactical and regulation tournament – are separated by netting and a seating area, allowing players to run drills and practice without disturbing coaches and bystanders.

CRU hosts special promotional events to bring new players together and to always keep players practicing. Many collegiate tournaments and competitions are held there, such as National Collegiate Paintball Association and Northern Xtreme Paintball League, along with three-man, four-man, and five-man tournaments.

“Shoot them, and don’t get shot,” Dixon says are the basic rules of the game. While this makes it seem rather violent, violence is a common misunderstanding of paintball. In fact, the industry lingo used in tournaments promotes non-violence. For example, “guns” are called “markers,” because they literally mark a player with paint. If you do get marked, you’re not “dead,” you’re “out.” Competitive paintball is a strategic team sport, not a violent free-for-all. Dixon hopes to continue promoting the non-violent aspect and creating awareness of the strategic elements to different school and club teams in order to make it more affordable for students who participate.

Coaches are usually fellow team members, shouting tips from the sidelines through the mesh netting that separates spectators from the field. Safety-netting is not the only precaution taken; referees survey the field during games to ensure fair play. “People have the misconception that it’s a dangerous sport, but if you have your mask on and are being safe, it is safe,” Dixon explains. An option for recreational players is a low-impact game, which is played with smaller balls fired at lower velocity. In tournaments, players’ arms and legs have to be covered, and the marker speed must be less than 290 feet per second.

Paintball can also be non-violent toward the environment; CRU uses only eco-friendly vegetable oil gelatin paint capsules. For indoor games, the paint fill is usually white and for outdoor games, it is usually bright yellow, because it shows up better in the natural light.

“Scenario” games are usually played outdoors, like in the woods or a field. “Speedball” is usually played indoors year-round, which obviously helps to bring players in during the winter months. Currently, Dixon and others are working to improve the outdoor field. In the future, they are hoping for CRU to be a destination for more teams around the country, even though teams from Ohio, Chicago, Wisconsin, already travel hundreds of miles to participate in events. 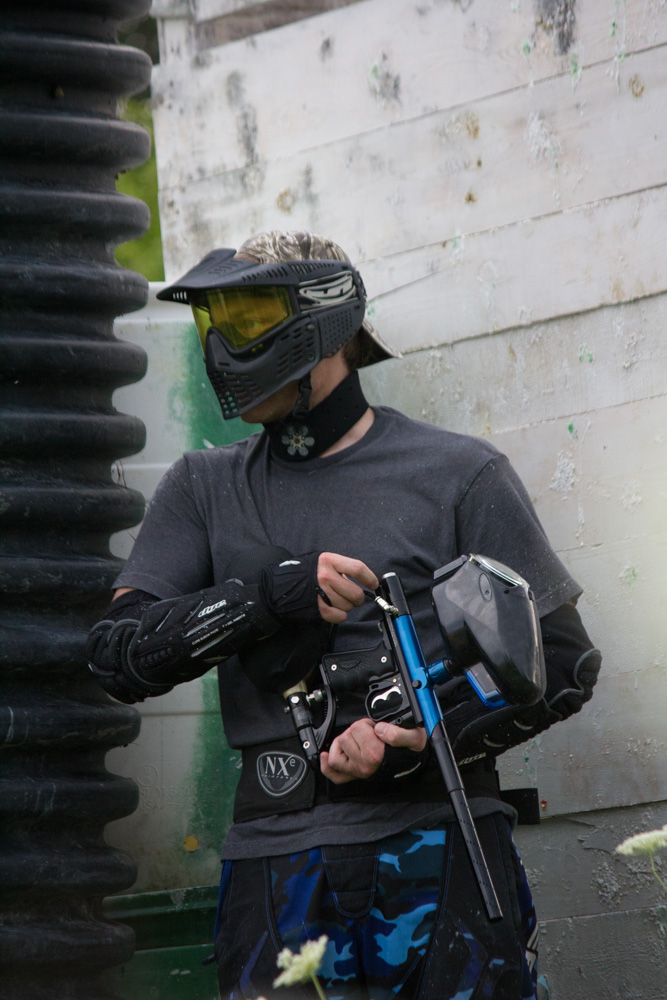 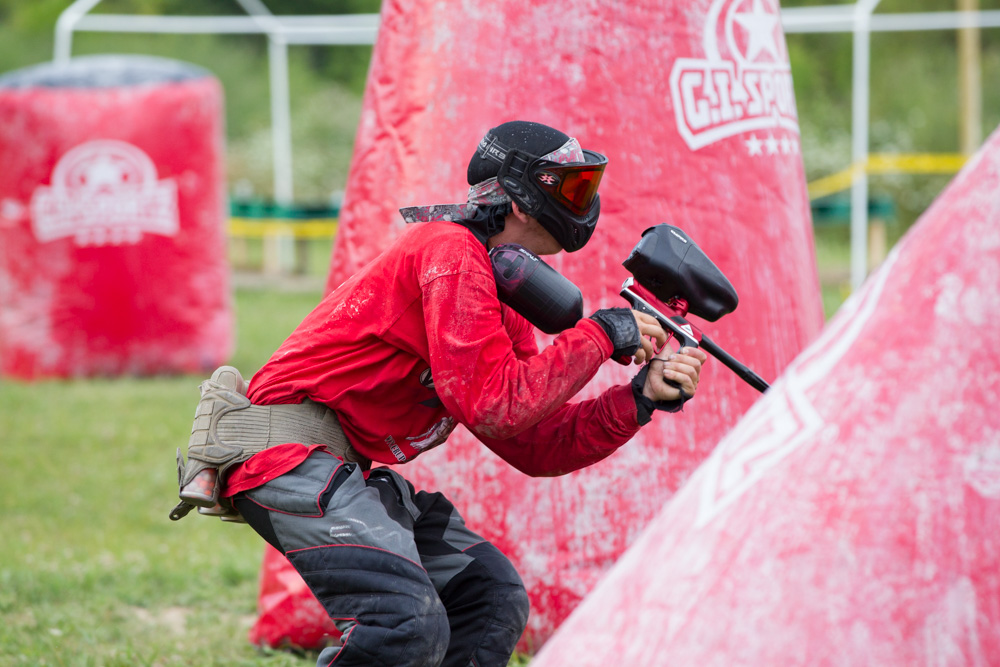 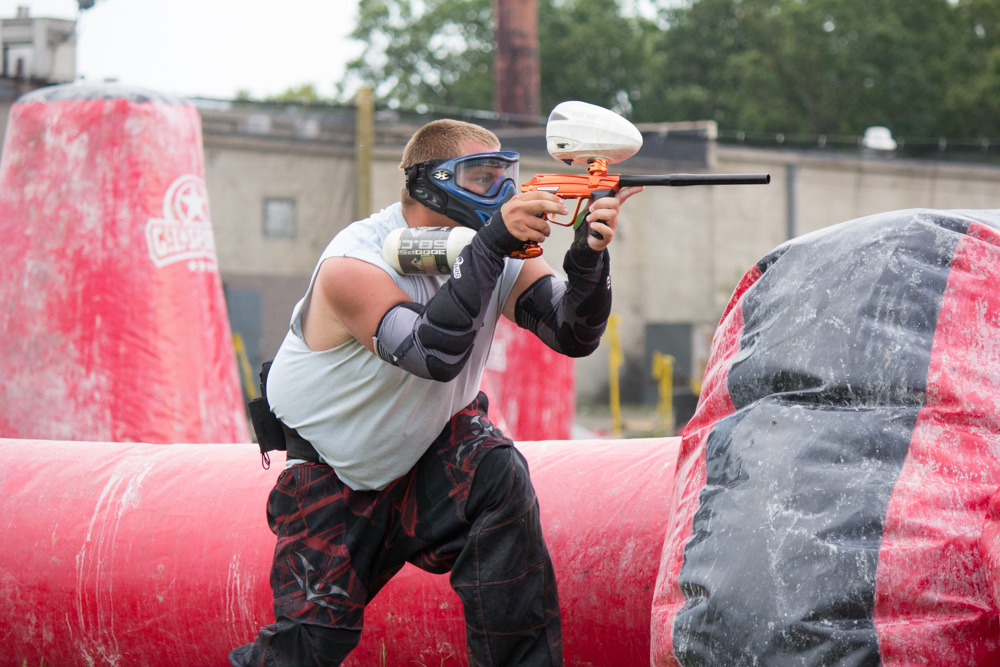 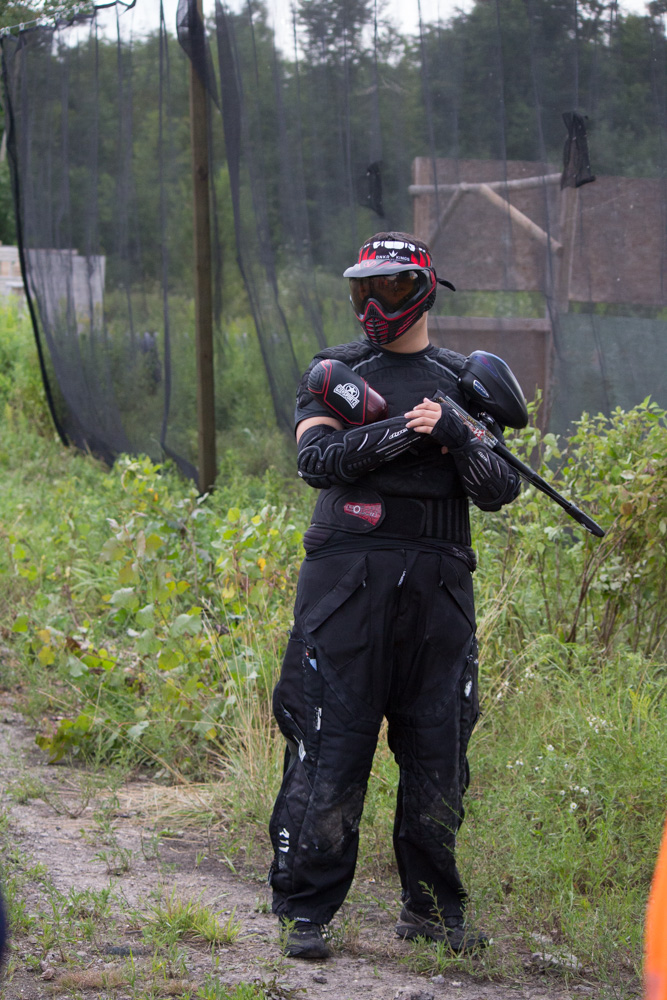 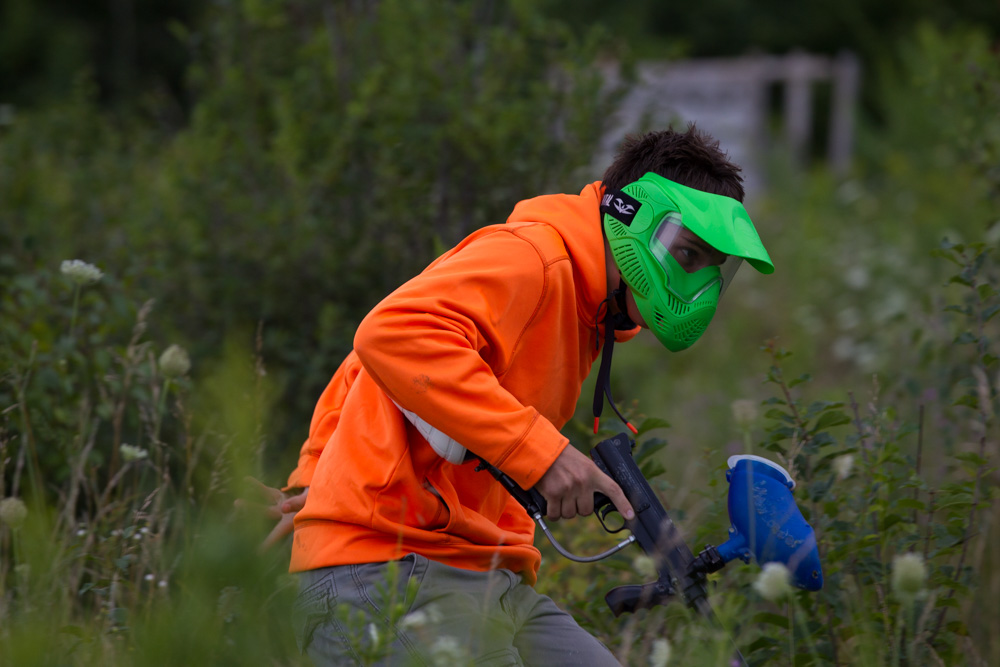 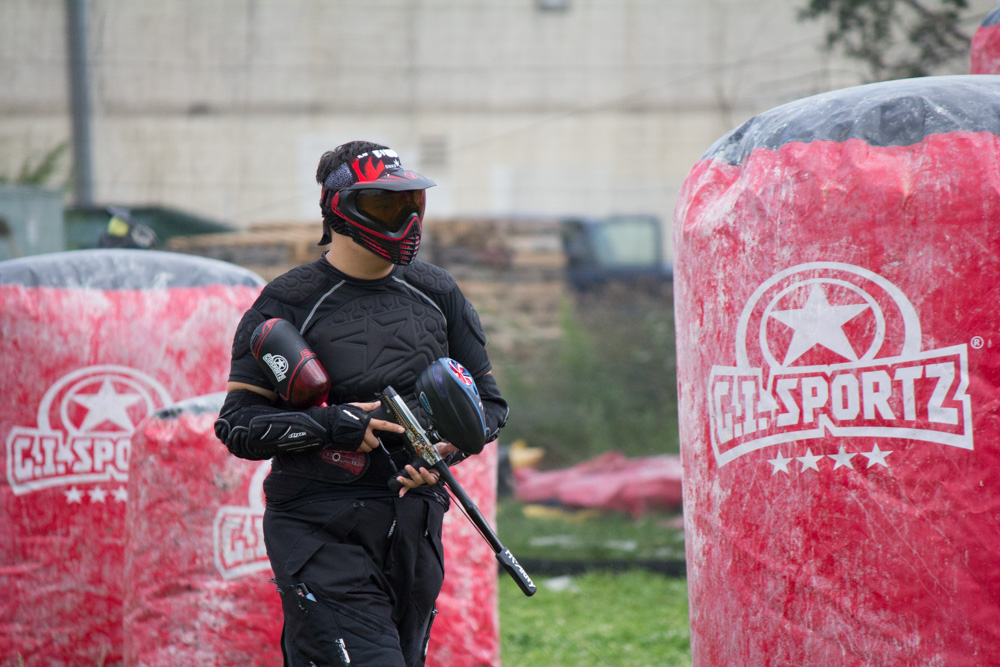 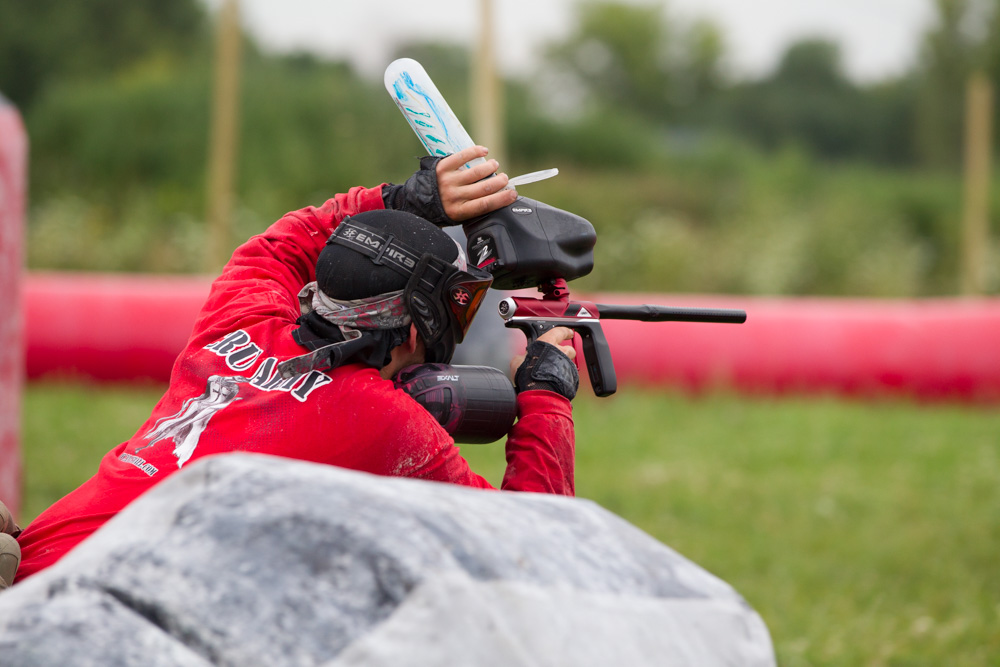 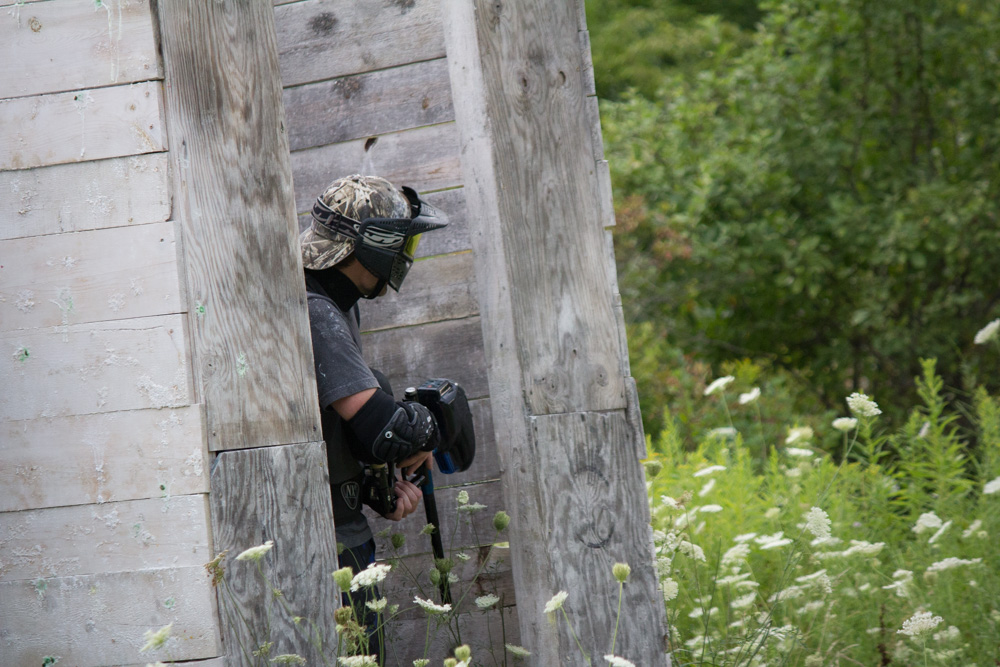 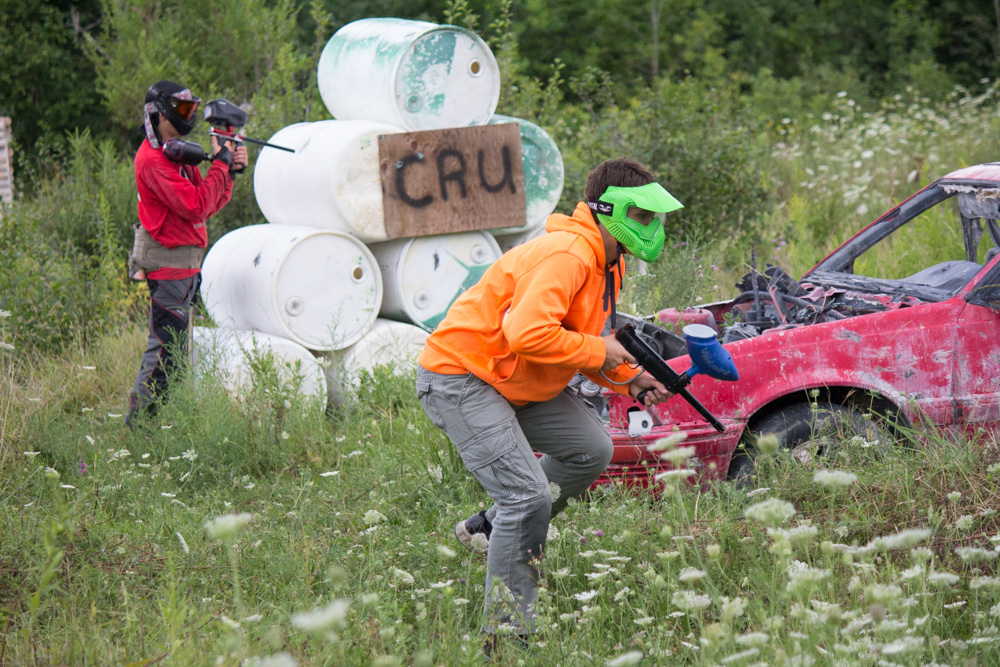 Dixon says there is constant change in the sport and now that it is nationally recognized at the professional, college, and club levels, social media outlets are providing updates online. During larger competitions, there are live streams and podcasts on popular paintball social media websites and blogs. “It’s an expensive sport,” he says, the biggest expenses being the equipment, paint, and tournament entry fees.

Despite the expense, multiple college teams come to CRU for practice and competitions. CRU works with UM-Flint, Mott Community College, UM-Ann Arbor, and Saginaw Valley State University, to name a few. Some school teams are allotted funds to compete; Kettering University and SVSU both have competitive paintball clubs. MCC and UM-Flint have mobile apps that offer student discounts at CRU.

There are over 60 variations of teams that stem from CRU itself. Players tend to form teams based on certain events, like scenario and speedball tournaments. Loren Adams is part of Saginaw Valley State University’s club team and the Flint City CRU team. Adams claims that playing with CRU is, “a lot more challenging than playing with SVSU, because the competition is a lot better. They’re not just college players; it’s tournaments with players from all over the country. One of the best parts of playing on the Flint team, though, is that I get to play alongside my two brothers and nothing beats that.”

The sport also has professional-level players, who are sponsored by name-brand apparel and equipment, but as with any sport, some are satisfied just playing as a hobby. Adams says, “CRU is the place where I’m going to continue playing and practicing, especially with the relationships I have with others who play there. I want to obviously play at the highest level that I can, but also enjoy the time with my brothers and friends.”

“CRU offers another avenue of entertainment. It’s not like anything else,” Dixon says. Adams adds, “I think the biggest thing it brings to Flint is an activity for the whole family to do, whether it’s making memories with a birthday party or joining a team and being part of the CRU family.”

CRU offers rentals for special parties, which are coordinated by Dixon’s wife, Katherine. To give back to the community, CRU is also a Job Corps training site for teens to help them learn a skill. Jobs typically include painting, drywall and wiring, and as payment, the teens can play for free after they work.

Indoor or outdoor, recreational or competitive, paintball has a place right here in Flint. CRU is attempting to create a new expectation for the sport. Similarly, unique and thriving businesses such as CRU are creating a new expectation for Flint. It’s rough around the edges, but in the best way possible. Resourcefulness, teamwork and exhilaration – it’s a chance to be in a different place for a short time, a place where messes are encouraged and loud noises are necessary. CRU Paintball is an example of Flint overcoming its struggles; it may be rough around the edges, but up close, there is color, camaraderie and fun.