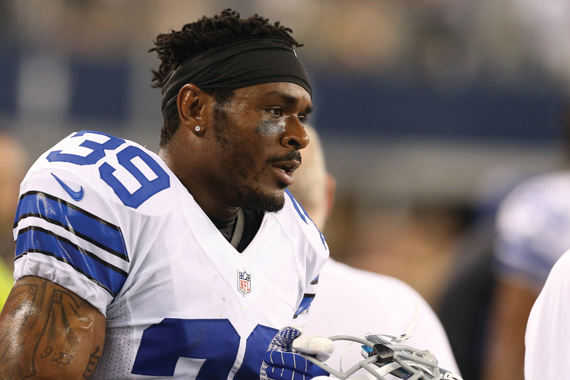 At times, the realization that he is living his dream overwhelms Brandon Carr, especially when he gets the opportunity to give back. Not only is the Carman-Ainsworth graduate Genesee County’s only current full-time NFL starter, he is also a member of the Dallas Cowboys, the team he has wanted to play for since he was six years old. “There have been some Sundays when I’m on my way to AT&T Stadium in Dallas to play another game in front of a packed house and the whole thing almost brings me to tears,” Carr told a group of kids who attended a recent free football clinic he organized at Carman-Ainsworth High School. “I can’t help but think about all that I have gone through to get to this point, all those who helped me and even those who doubted me, because that fueled my fire to do whatever it took to reach the NFL.”

Carr is a cornerback soon to begin his seventh season in the NFL and third with the Cowboys. He says that reaching this level of play took an unwavering belief in himself, an unmatched work ethic and an uncanny ability to focus on his goal on a daily basis.

That drive and devotion to his craft lifted Carr from an NCAA Division Two college (Grand Valley State) to a starting position in his first NFL game. He has not missed a start since. “I told myself, ‘I don’t care if I am a little small (six feet, under 200 pounds) or whether or not my 40-yard dash time (4.7 seconds) is really impressive coming out of high school, I am determined to make it,’” Carr told those gathered at the camp. Then, he dropped his head and pushed his hands slowly away from his ears as he recalled his affirmation. “I was like, I don’t care what anybody has to say, I am going to focus on doing something productive every day to reach my goal,” Carr said. “Slowly but surely, I kept creeping up on the guys who were wanted by bigger colleges coming out of high school and creeping and creeping up on them until I was able to be drafted.”

After an All-American career at Grand Valley, during which he helped the Lakers win a pair of national championships, the Kansas City Chiefs selected Carr in the fifth round of the 2008 draft. They had a vacancy at cornerback after their starter signed with the New York Jets. Carr seized the opportunity, becoming one of just a few NFL starters from a Division Two college. In fact, of the NFL’s 768 starters last season, only 18 – just two percent – hailed from schools that size.

“Once you realize that you play in the NFL, then it comes down to mental toughness,” Carr told MCM after the kids camp had wrapped up. “If you have that, the physical part will take care of itself. I think my mental toughness made the difference and allowed me to start from Day One. I had to develop confidence so that I could prepare well during the week and handle what was going to come at me on game day.” And Carr had plenty to handle on his first NFL game day. The Chiefs were visiting the New England Patriots, who had reached the Super Bowl the previous season. Carr’s task was to cover the Patriots’ receiver, Randy Moss, one of the league’s best and a certain future Hall of Famer. “Whoa, wow!” Carr exclaimed when recalling his NFL debut. “We were riding to play against New England at their place and I didn’t know what to expect. I thought back to my family, how proud they were, and my city, my supporters and even the people who doubted me. It was a mix of emotions, but I was determined to have fun and make some plays.” While Moss caught six passes for 116 yards and a touchdown, Carr did make plays, finishing with three tackles.

After four seasons in Kansas City, Carr signed a five-year, $50.1 million contract with the Cowboys in 2012, and his dream of playing for the organization known as “America’s Team” came true. “Playing in Dallas has been everything I could ask for – just amazing,” Carr said. “The fans are incredible and passionate, which is both good and bad. The city has a lot to offer and the hospitality is incredible. I love the opportunity I have been given to play for the team I grew up idolizing. It’s been a great part of my journey as a professional athlete and as a man.”

Signing a rich contract in such a football-mad market has meant dealing with the scrutiny that comes with it. Carr’s performance was called into question at times last season as a member of one of the league’s weakest defensive lines.

Nobody, however, is tougher on Carr than Carr himself. “I am harder on myself than even the coaches are, so I would say 2013 was an average season,” said Carr, who has 319 tackles, 88 pass deflections and 14 interceptions in his career. “It humbled me and allowed me to learn how strong-willed I am about taking a beating on and off the field and staying strong to compete harder. Now, it’s time to be faster, smarter, more physical. I want to help lead our boys into the big dance (playoffs) and make some noise!”

While he appreciates the fame, money and status that playing in the NFL affords him, the perk Carr enjoys most is being able to give back, as he did at the Carman-Ainsworth camp, attended by 270 budding athletes. Carr taught them about the game he loves and the life he tries to lead. “I have been envisioning doing this ever since I entered the NFL,” he said. “I‘ve wanted to put on my own camp at my high school, and give back to the community that raised me. I am in a blessed position to have this platform to stress to kids that they should strive for the same work ethic that put me into the NFL. You have to focus on your craft, stay determined and work on improving yourself every day.”

No matter how far football takes him, Carr intends to remain grounded in that philosophy.