“Promoting literacy and literature in the Flint community is a dream of mine,” says Coyne, 38, who returned to Flint after earning his bachelor’s degree from the University of Chicago and his master of fine arts in creative writing from the New School, in New York City.

Coyne lives and breathes anything literary-related. He writes in multiple genres including plays, poems, essays, short stories, fiction and press releases. He has also written three novels: Hungry Rats, a mystery about a Flint serial killer which served as his thesis project in graduate school; Shattering Glass, his personal favorite; and Atlas, a collection of 13 short stories and essays. When he isn’t writing, his mission is to stimulate and increase Flint’s level of literacy and literary opportunities.

For example, he runs a writing workshop for teens at the Flint Public Library from September to June. Area middle and high school students participate. “We critique and read one another’s work,” Coyne says. “The participants write everything from poetry, essays, fiction and there’s even some lyrics and songwriting.” He is helping them develop a deeper hunger for reading and writing and exposing them to new literary genres. He also provides diverse workshop presenters and easily rounds up guest speakers to talk to the young writers. “We try to accommodate their interests and keep it engaging.”

Coyne knows a thing or two about keeping things interesting. He’s more or less been doing that since his college days at U of C, where he and a group of like-minded artists, authors, actors and other creative and cerebral young adults met in an apartment, at first to hang out and party, but later to share their literary inspirations and attraction to the literary style, gothic funk. In 2004, their signature moniker of ‘Gothic Funk Nation’ was born and its Tuesday Funk reading series has become one of Chicago’s best-attended literary events.” Gothic Funk has been described as updated romanticism daring to use a postmodern narrative along with an edgy, contemporary style.

In fact, the group continues to receive rave reviews. Here is one: “Whether the Gothic Funk is a budding literary empire or an experimental literary collective, it sounds as if they know how to throw a party.” Robert Duffer, Chicago Examiner. 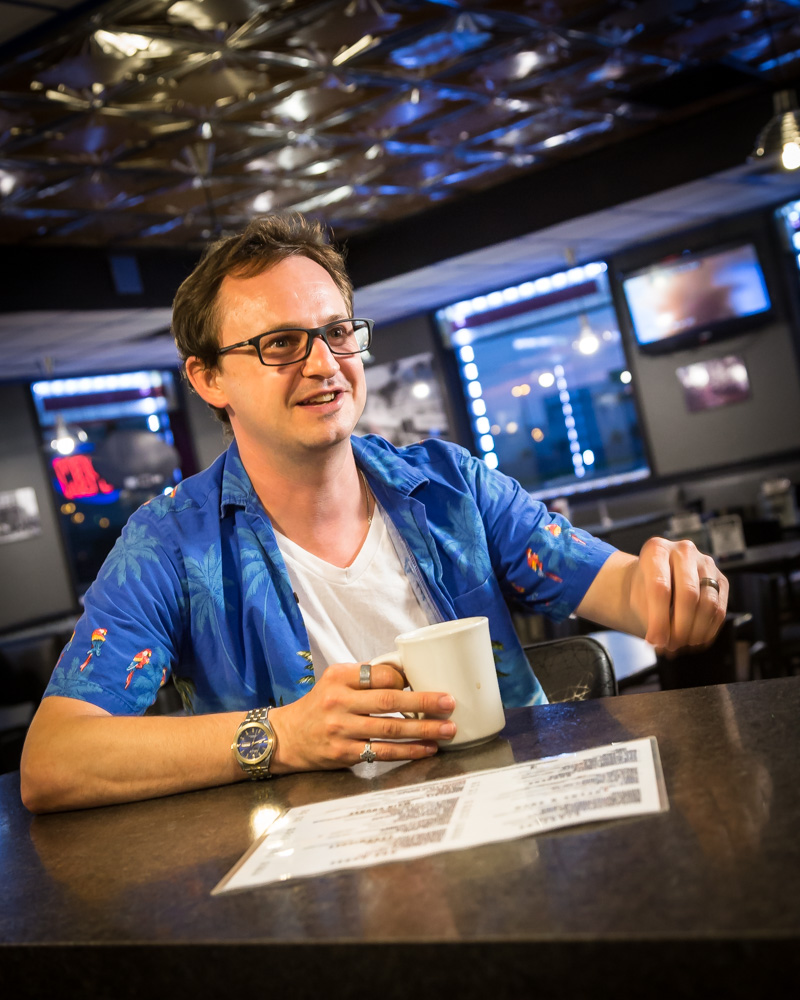 “I’m quite grateful to be back and helping contribute
to a legacy of literary efforts for Flint.”

He explained how sometimes, by default, there is a negative stigma associated with writers who self-publish, so creating and using his own publishing company helped to lift such publishing pessimism. “When you incorporate and you own the publishing and press company, it definitely gives legitimacy to your projects,” he says.

Gothic Funk Press and its projects are downright authentic. Coyne relies on a staff of, not surprisingly, his old friends from Gothic Funk Nation to collaborate with – Elisabeth Blair and Reinhardt Suarez serve as editors; his wife, Jessica Coyne, is a proofreader; Skylar Moran is the group’s publicist and the website is designed by Sam Perkins-Harbin.

One project the Gothic Funk Press team is proud of is its online multi-media arts journal, Paramanu Pentaquark, which highlights artists from around the globe. Although it had Chicago roots, the group revived it in Flint and expanded it. “We accept and receive submissions in sound, words, images, photographs, poems, songs and basically anything creative in nature,” Coyne says. His open, careful attention to those submissions is one of the things that Gothic Funk Press co-editor, Elisabeth Blair admires. “Connor is an avid appreciator of humans and their capacity to create,” she states. “A conversation with him is always, without exception, an inspiring and motivating experience, and I’m certain I’m not the only person who feels that way.”

Coyne believes Flint is fertile soil for producing more literary programs. “Flint is a dynamic and challenging community,” he says. “Flint can feel overcome with misfortune and overflowing with hope at the same time. Such a combination breathes life into original, creative work which we try to publish and memorialize. I’m quite grateful to be back in Flint and helping contribute to a legacy of literary efforts for Flint.”

More recently, Coyne and Gothic Funk Press helped organize and launch the first-ever Flint Literary Festival, which drew literary fans to the two-day event. He partnered with the Flint Public Library, East Village Magazine and members of the Flint Chamber of Commerce and U of M-Flint to present, “Flight,” a Flint Literary Festival where hundreds of guests of all ages and backgrounds were treated to featured readers, local and award-winning authors, literary panel discussions, book sales and a popular after-hours open mic night.

It seems Coyne’s plan to bring literacy opportunities to Flint is already fruitful. He is confident that 2018 will harvest a bigger and better literary festival. “We scrambled to have everything in place on a tight budget, but we did it,” he says. “We learned a lot and know next year’s event will include more structure, promotion, preparation and funding.”
To learn more about Gothic Funk Press or to help organize next year’s literary festival, contact Connor Coyne at 708.224.5297 or email blueskiesfalling@gmail.com