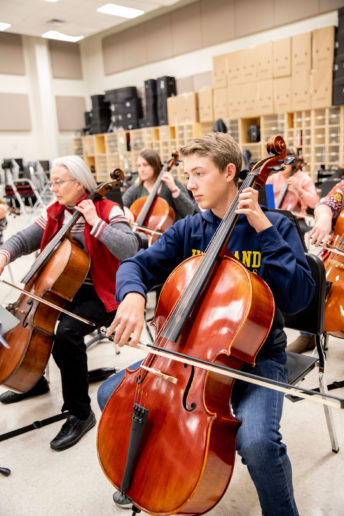 Celebrating its 10th anniversary this year, the Fenton Community Orchestra is one of Fenton’s finest gems. Led by Andrew David Perkins, Director/Conductor, the Orchestra was co-founded by three Fenton residents: Jennifer Fleck, Lisa Bayer and Kirsten Tesner, who wanted to bring a multi-generational orchestra to the area and give people of all ages the opportunity to play.

In its first year, about 15-20 musicians participated. Now, in its tenth season, FCO has grown to more than 90 musicians who perform for thousands of audience members every year. “It’s a nice, full-sized symphony orchestra with musicians ranging in age from 12 to the upper 80s!” Perkins exclaims. Orchestra members are from Fenton and the surrounding area – Byron, Hartland, Linden, Holly, Flint, Davison, Swartz Creek, Davisburg, Grand Blanc, Durand, Howell and Clarkston. Since the beginning, more than 200 musicians have performed with the FCO ensembles. 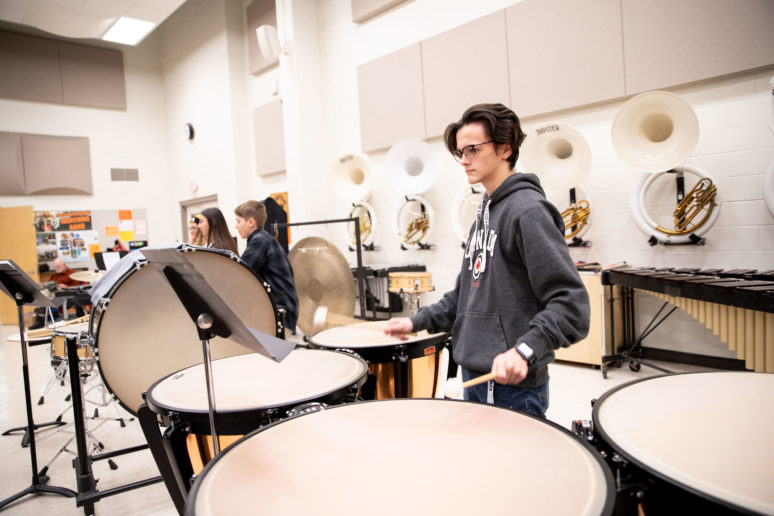 FCO seeks to promote mutual growth and understanding through the experience of musical performance. Musicians can be involved in three ensembles, according to the Conductor, including Simply Strings (directed by Jane Ball), Prelude Strings, and the Full Orchestra. The groups rehearse every Thursday in Fenton High School’s band room. “It’s really nice for the musicians to get together with peers who have decades of music experience,” Perkins adds.

According to its website, the purpose of the Fenton Community Orchestra is to provide a place for musicians of all ages to connect through music by providing an educational and entertaining music program both for its members and its audiences. Membership is open to musicians age 12 and up, provided they have the desire to play and learn together. 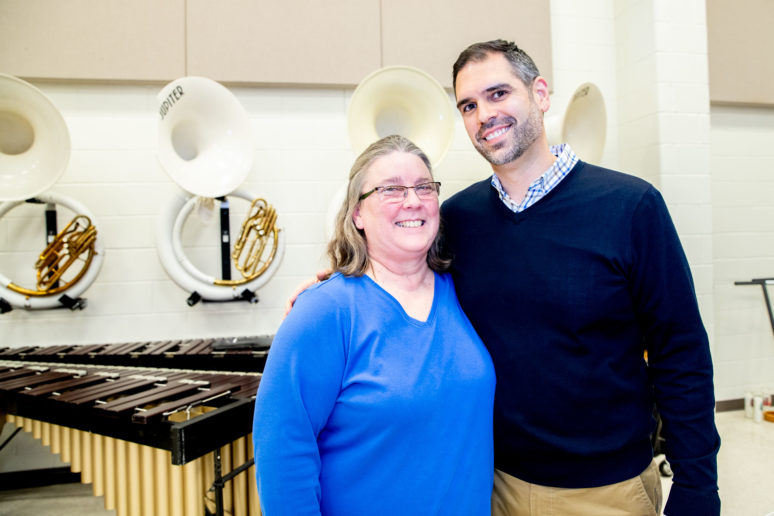 “It’s really nice for the musicians to get together with peers who have decades of music experience.”
Andrew David Perkins, Director/Conductor 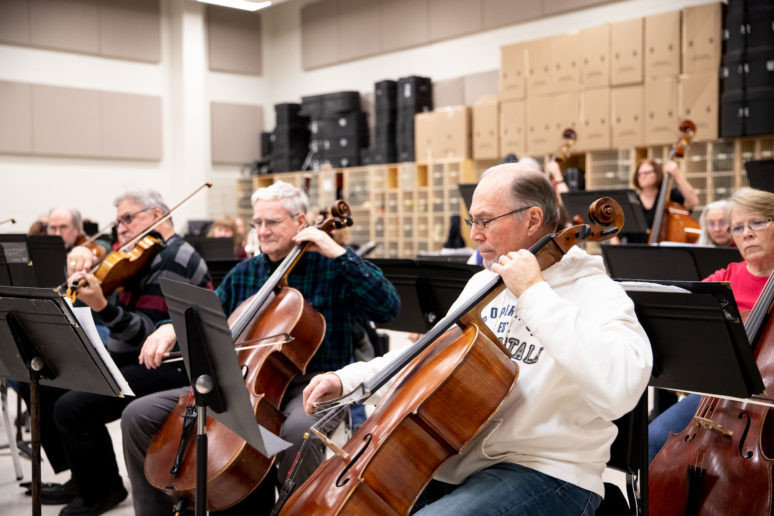 Perkins, who is currently Director of Bands at Fenton’s Andrew G. Schmidt Middle School, came on board as FCO director/conductor at the end of its first year. “I played percussion in the orchestra in its first season,” he recalls. “The president of the orchestra at the time, Jennifer Fleck, asked me to step in.”

The FCO performs music from the late 19th Century, the Romantic Period, featuring the works of composers such as Ludwig van Beethoven, Pyotr Ilyich Tchaikovsky and Johannes Brahms. “We also consider ourselves a pop orchestra, performing music from the pop genre and Broadway music. Our audience is musically diverse,” he says. “We also play pieces from the 20th and 21st centuries. The musicians enjoy the variety.”

According to Perkins, there is no formal audition process to become a member of the FCO. New members can try out in early September. “We are always looking for string players,” he says. 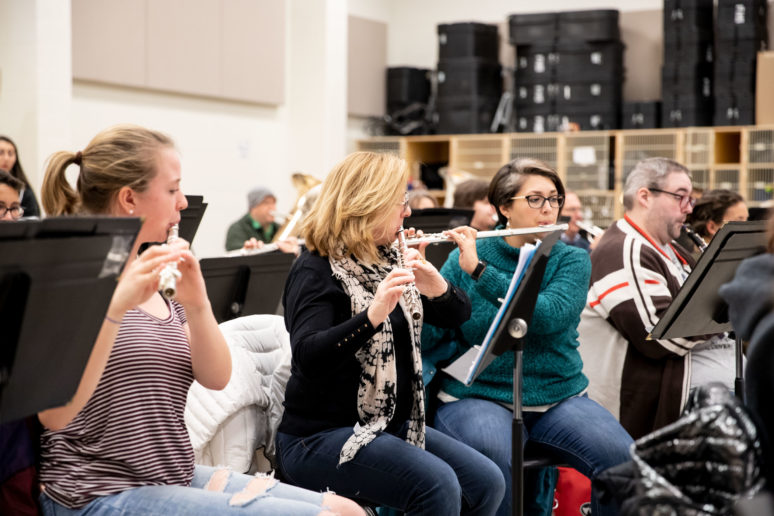 At this writing, FCO is gearing up for its Winter Concert, which is held at the Fenton High School Rubi Zima Auditorium on December 5-6. All of the ensembles will perform, and the featured piece is Tchaikovsky’s orchestral tone poem, Marche Slave in B-flat minor, Op. 31. The concert will also feature a variety of music including a sacred chorale piece, O Magnum Mysterium. This year’s guest artist is Dr. Carrie Pierce, Associate Professor of Cello at Texas A&M University – Corpus Christi and daughter of FCO violinist, Debbie Pierce. She will perform a Joseph Hayden Cello Concerto.

A special concert is in the works to celebrate FCO’s 10th Anniversary, Perkins reports. “I love the Orchestra,” he says. “It’s always been a dream of mine. Not many people can realize a dream like this. I’m profoundly grateful for this opportunity, to make the best music with wonderful people. I’m so happy we can give back to the community in this way.” 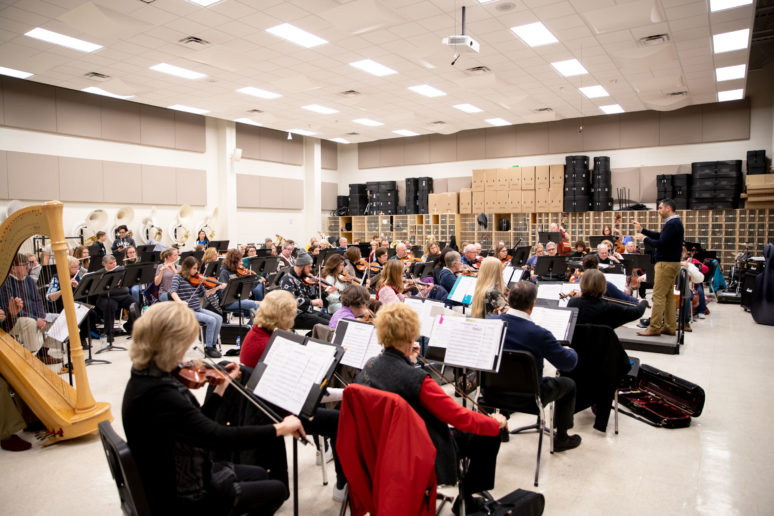 A community supported orchestra, FCO operates under the direction of a Board of Directors (Eric Szczepanski, Chairperson). It is a 501(c)(3) nonprofit corporation and donations are tax deductible. For info on how to donate, visit fentonorchestra.org/donors.html