Did you catch the game last night? How about that halftime show? Did you applaud when the marching band finished their set? For many Flushing students and family members, the main attraction of the Friday night game is watching the band perform at halftime.

Playing in the marching band takes organization, talent, dexterity and unyielding dedication. Brad Davis, Band Director for Flushing Schools, is always amazed by the level of responsibility and resolve shown by his students. “When people start complaining about the new generation of kids, I tell them to go and watch a marching band. You will have a completely different respect for them,” says Davis. “They work harder than adults ever will. They don’t want to miss any part of it.” The sentiment is shared by Assistant Director of Bands, Eric Fontan. “They don’t want to let anybody down. They are deeply committed to it,” he states. “After twenty years, I still get tears in my eyes watching kids grow. I remember a fifth-grader who could never sit still and now, he’s out there on the field, standing at attention and doing his best to stay in line. They want to get better.”

The Flushing High School Marching Band has been one of Michigan’s premier marching bands since as early as the 1970s. For Davis, keeping up with the tradition of success is a year-round process. “We start planning in January,” he says. “First, we write down the craziest ideas for a show that we can think of. This year’s show had the visual theme of ‘stretch, spin and bounce,’ and I had to listen to a ton of music to find pieces with those elements. It changes every year.” Davis continues, “One year, we had a piece of music that was written for a superhero theme. After listening to it as a group, someone said that it sounded more like a vintage magic show, and we ran with that. We changed it after that one meeting.” 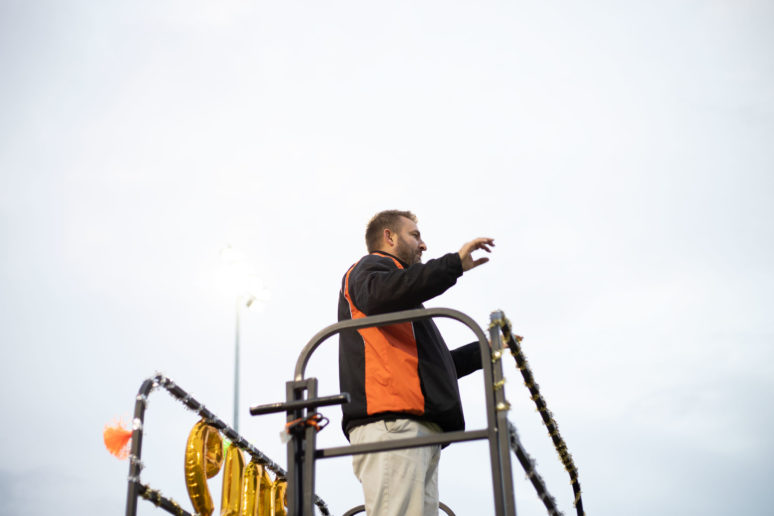 “I tell the kids all the time, ‘it’s not how you play; it’s what kind of people you are when you leave the organization.”’
Brad Davis, Band Director

Once the show is designed, the next step is teaching the students. They start with recruitment rehearsals in May. “It’s a team-building exercise,” explains Davis. “We have kids in 8th grade through seniors, and we have to create a respectful atmosphere.” He often welcomes 8th-graders into the marching band. “There are 73 kids this year, and ten are 8th-graders. We accept them only if we believe they can handle it, because we don’t want it to be a negative experience,” he states.

After recruitment rehearsals, all new members have to attend a band basics camp the week after school lets out. Throughout the summer, the band practices from 2-9pm Tuesday through Thursday, every other week. A week of pre-camp at the school is next, immediately followed by a week away at camp. When school starts, the kids really get busy. Starting in August, they practice two days a week and every single Saturday. “These kids will march all the way through summer, just to do one show at Ford Field. They are amazing,” smiles Davis. 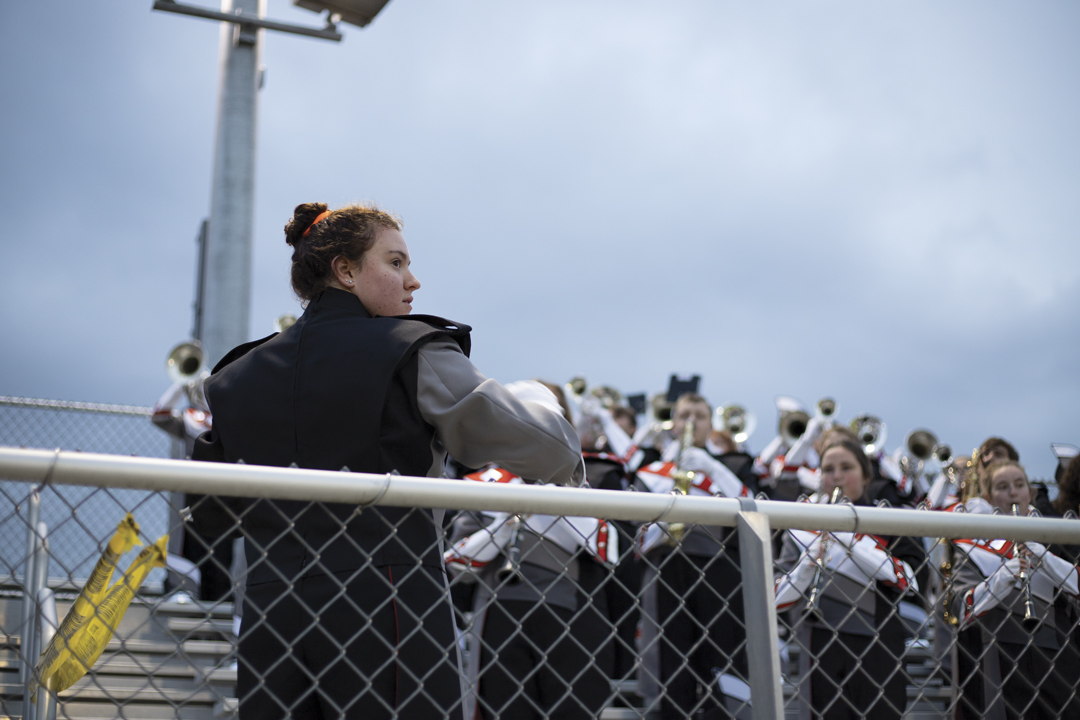 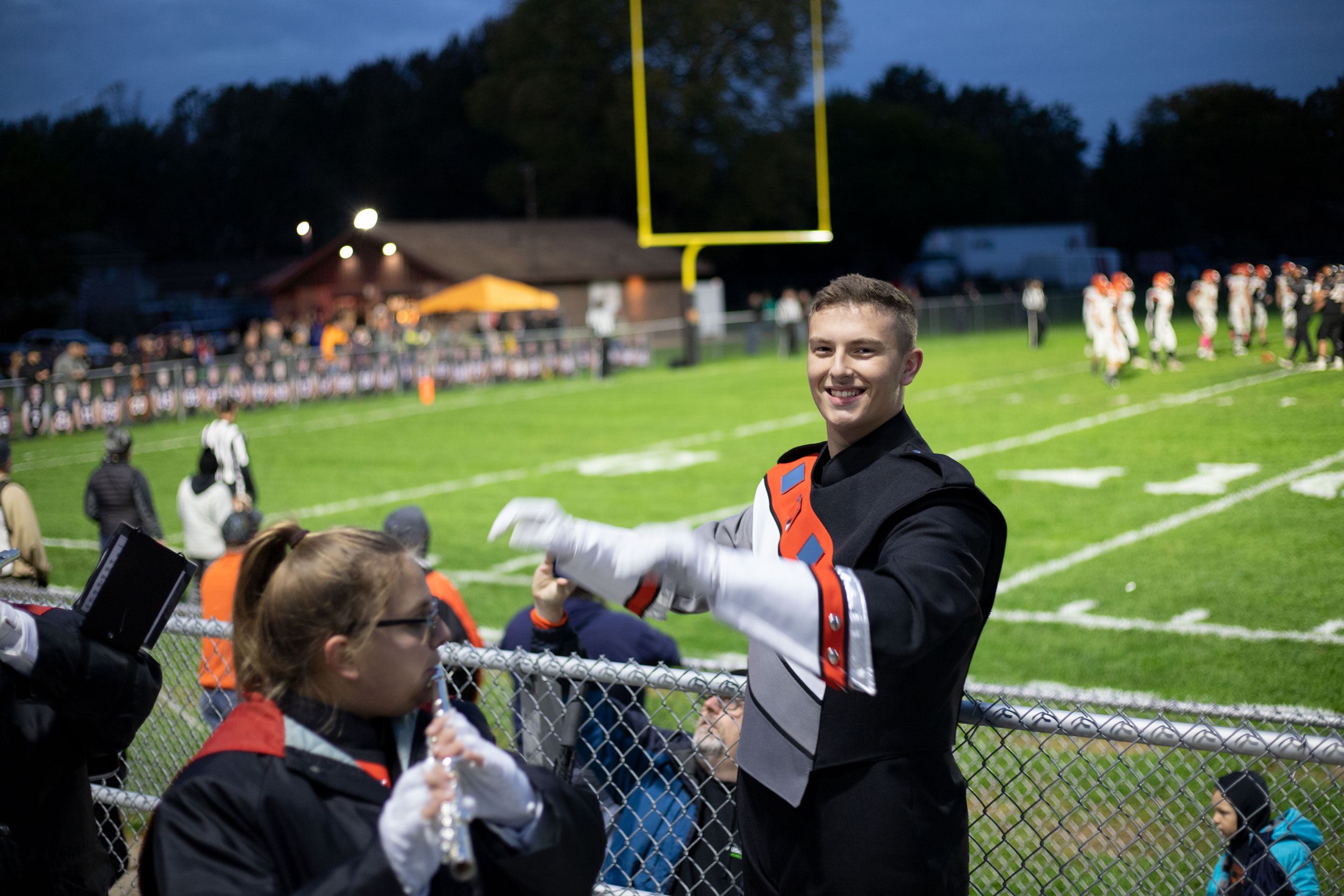 For the drum major, that commitment goes even deeper. “The drum major is the student leader of the band – it’s a big deal for us and the students,” informs Davis. At Flushing, the selection process is lengthy and extensive. “Drum major candidates have to complete an application requiring past experience and leadership positions (in or out of the band), and their individual idea about what a drum major should be. Next, they have to audition in front of the entire band, and then comes the interview,” Davis continues. “We treat it like a job interview – they have to dress up for it. They interview in front of me, a former drum major, and any parents who have a hiring background. Everyone is going to have a job interview someday, and we want to walk them through that. I’ve seen kids go from extremely nervous to extremely confident during the process.” After the drum major is chosen, he or she will attend the drum major camp at Ball State University. “Yeah, I’ll say the drum major at Flushing is a pretty big deal,” Davis says, laughing.

The Flushing Marching Band is known as a competitive marching band. They are a member of the Michigan Competing Bands Association (MCBA) and that differs from some marching bands in the area. Other Genesee County MCBA member bands are: Atherton, Clio, Carman-Ainsworth, Grand Blanc and Linden. These bands are engaged with three different circuits. The Michigan School Band and Orchestra Association, or MSBOA, has one festival where bands are judged with the traditional 1-5 rating system. About 80 percent of all marching bands will be involved with the MSBOA. Scholastic competition is the next step, which consists of smaller invitationals, each with a single winner. The MCBA has qualifying events and an annual State Final competition held at Ford Field. The competition consists of five flights, each comprised of 10-12 marching bands that will all make the State Finals. “The system was restructured to include as many schools in the final as possible,” explains Davis. “It’s a big deal for the kids.” 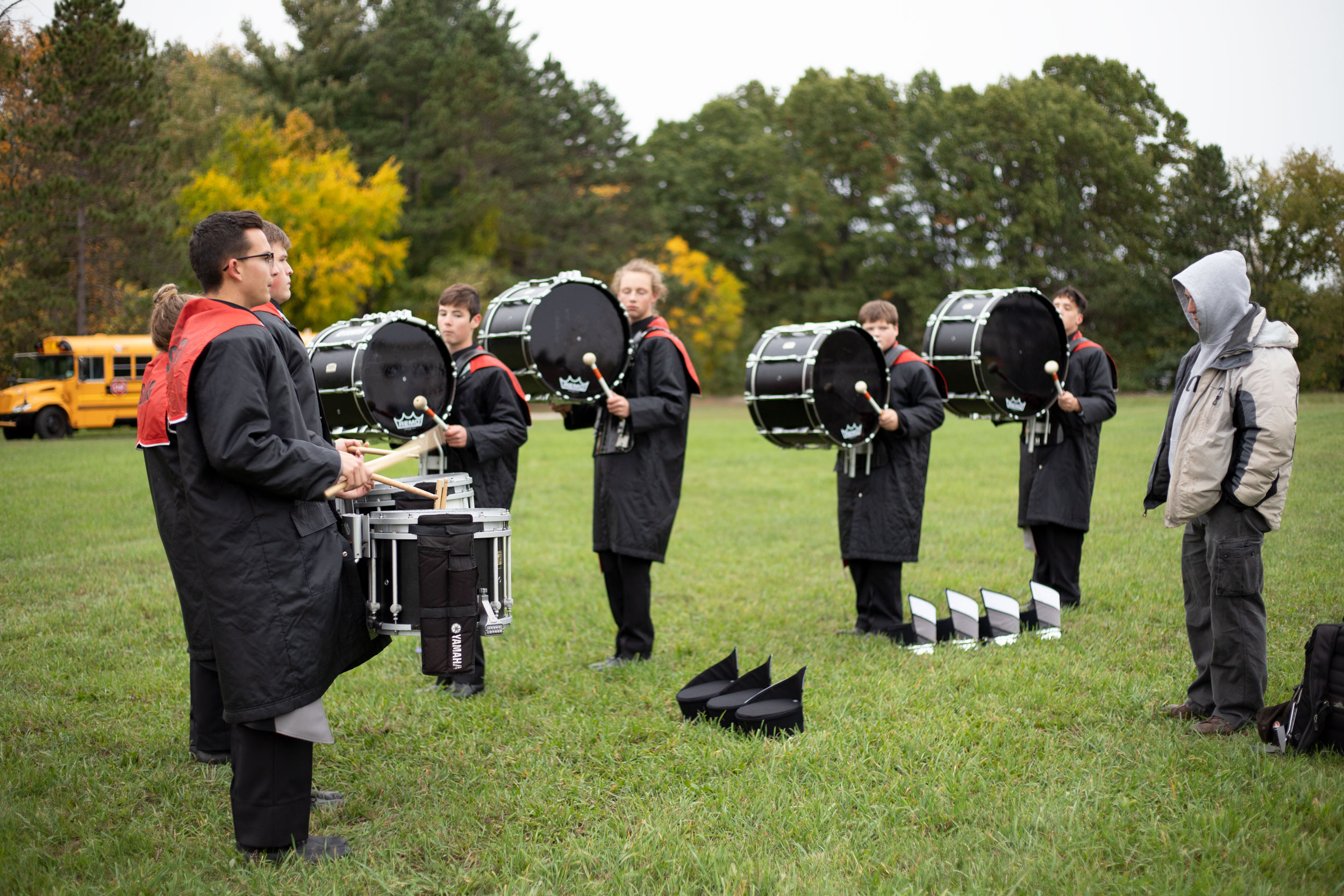 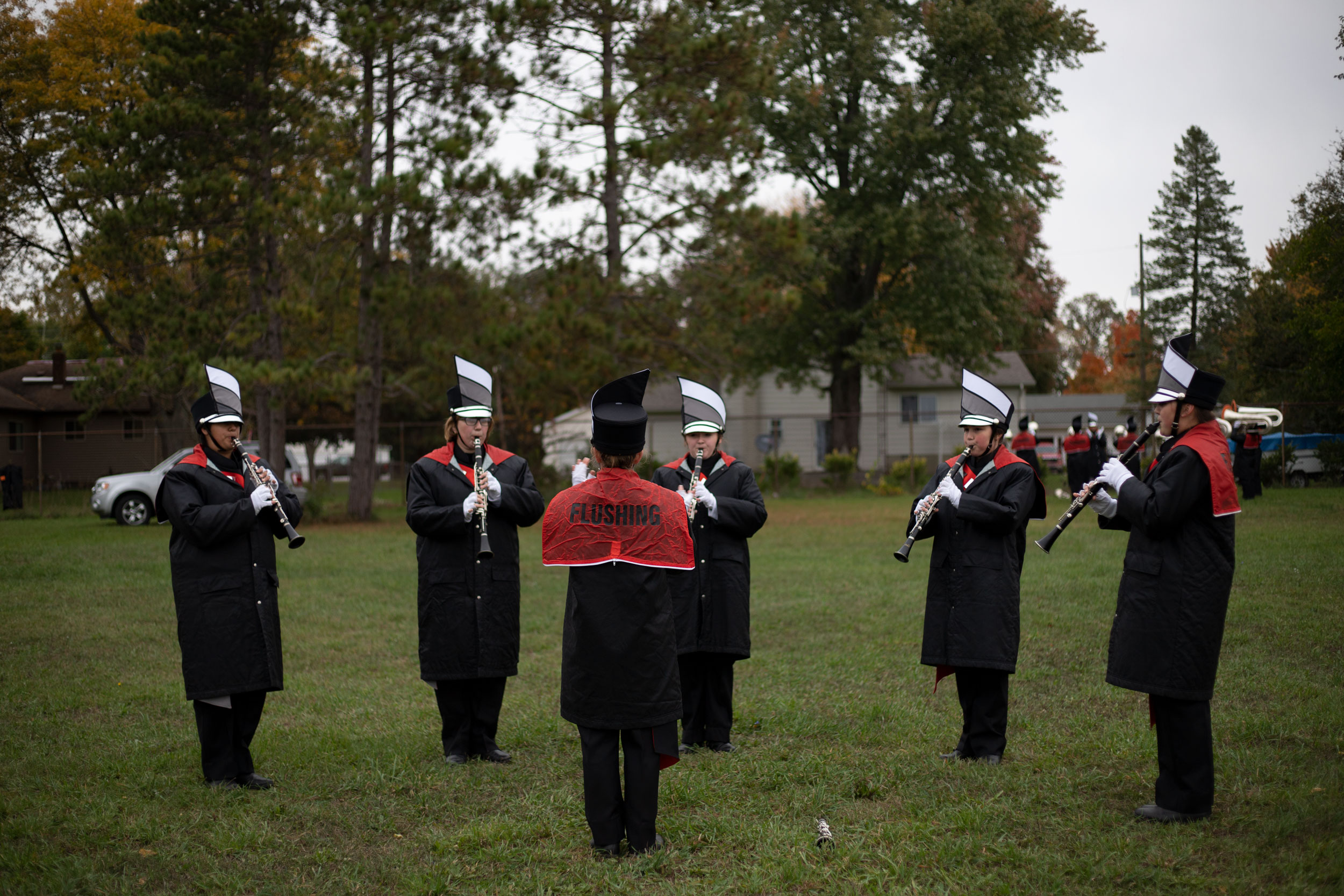 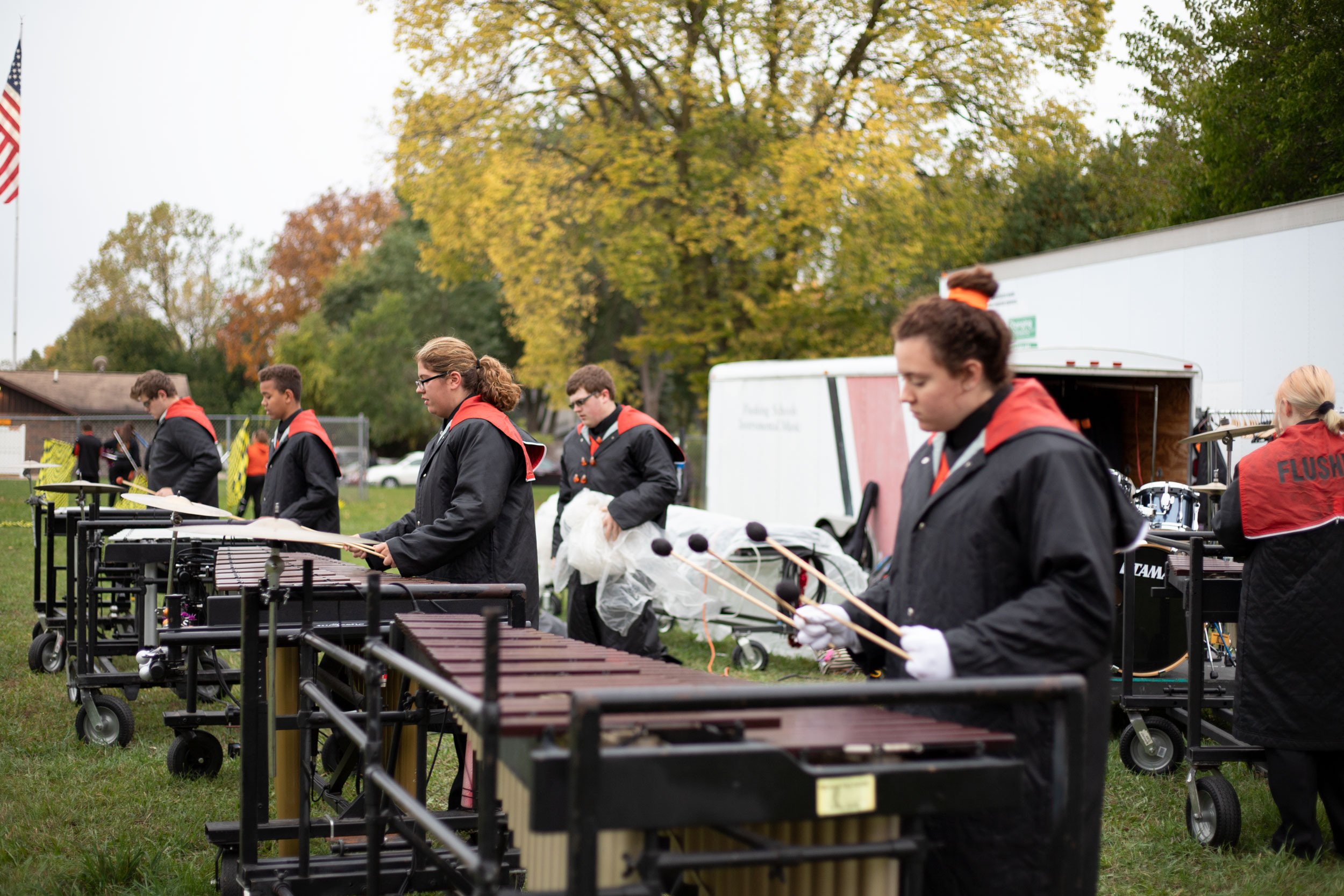 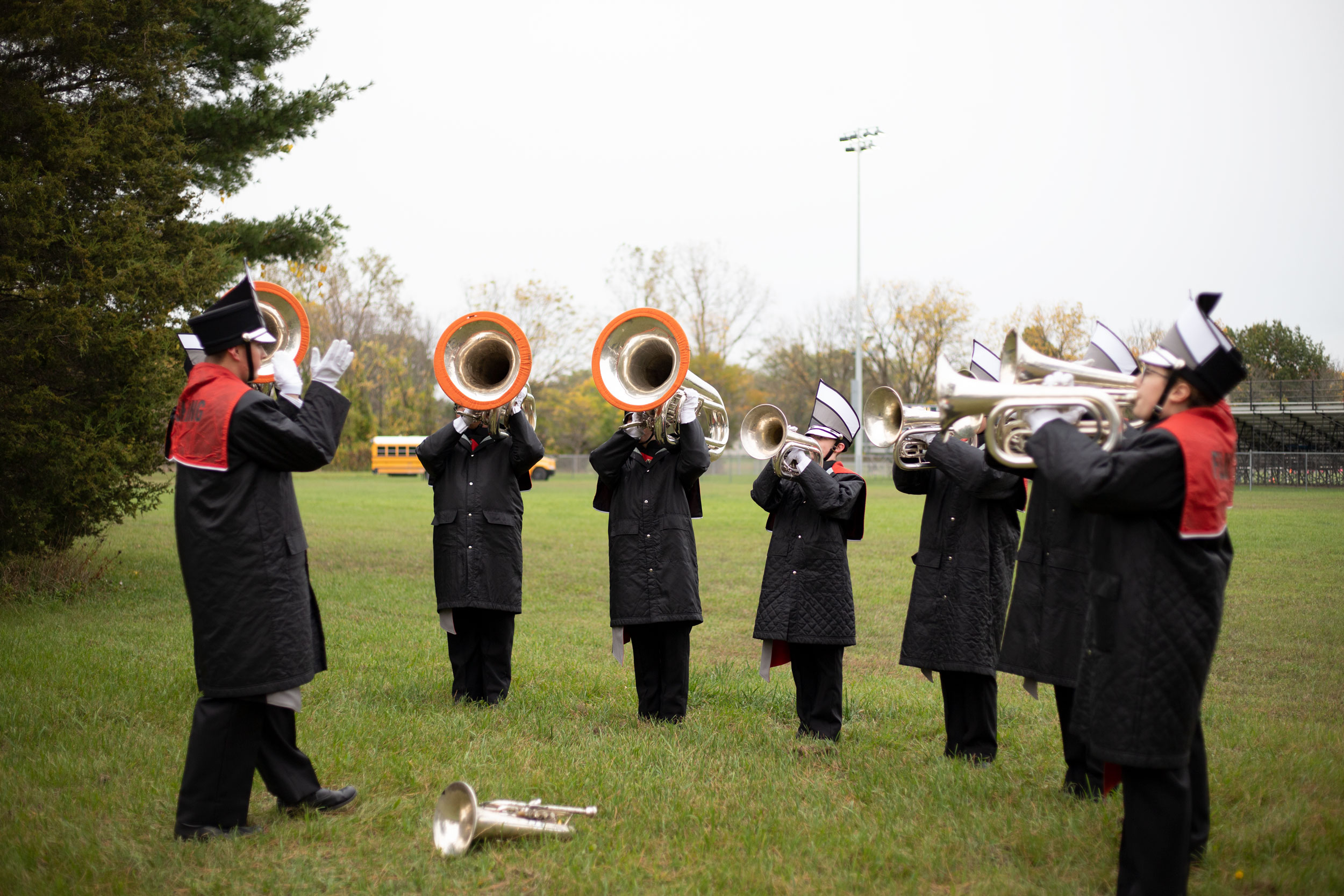 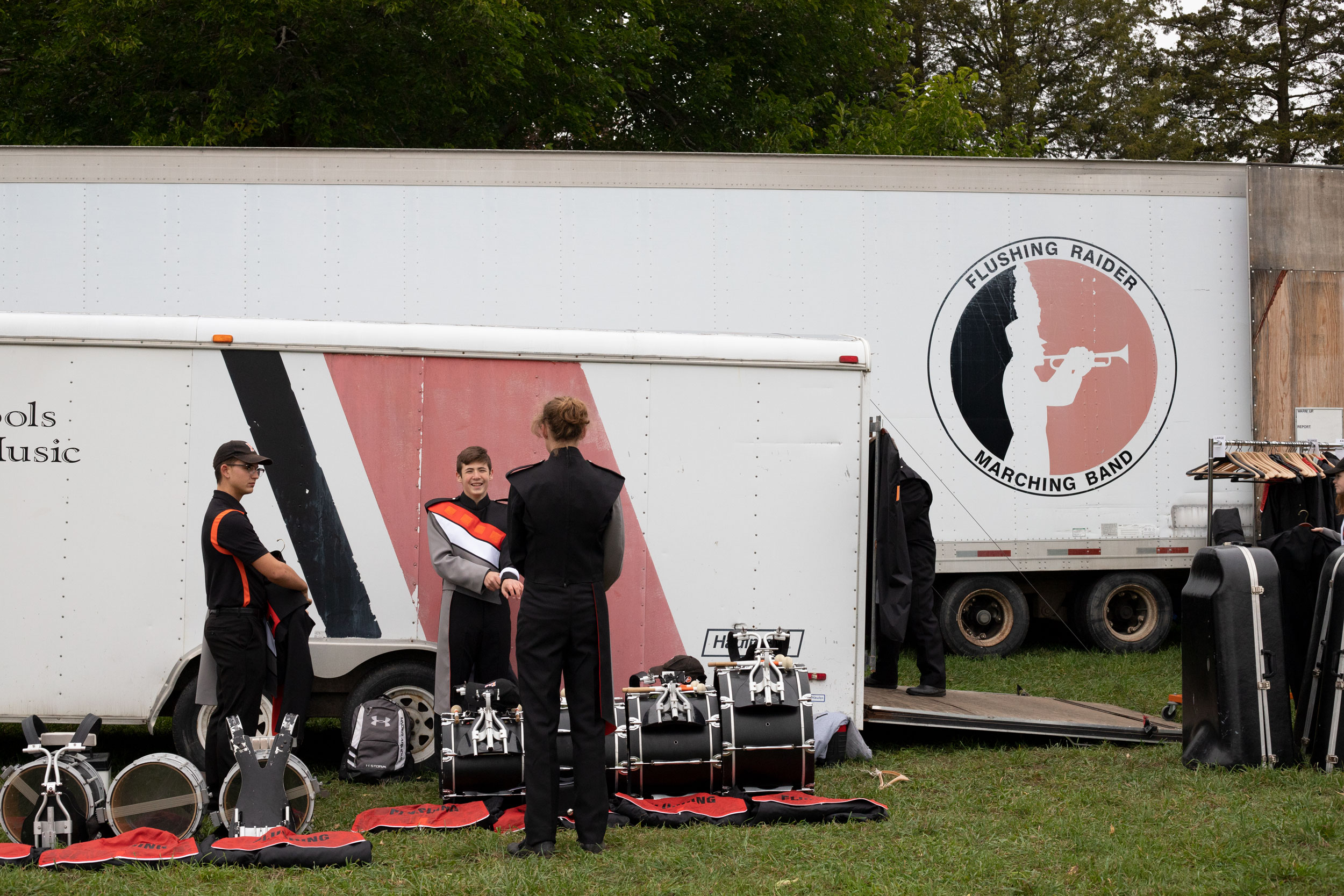 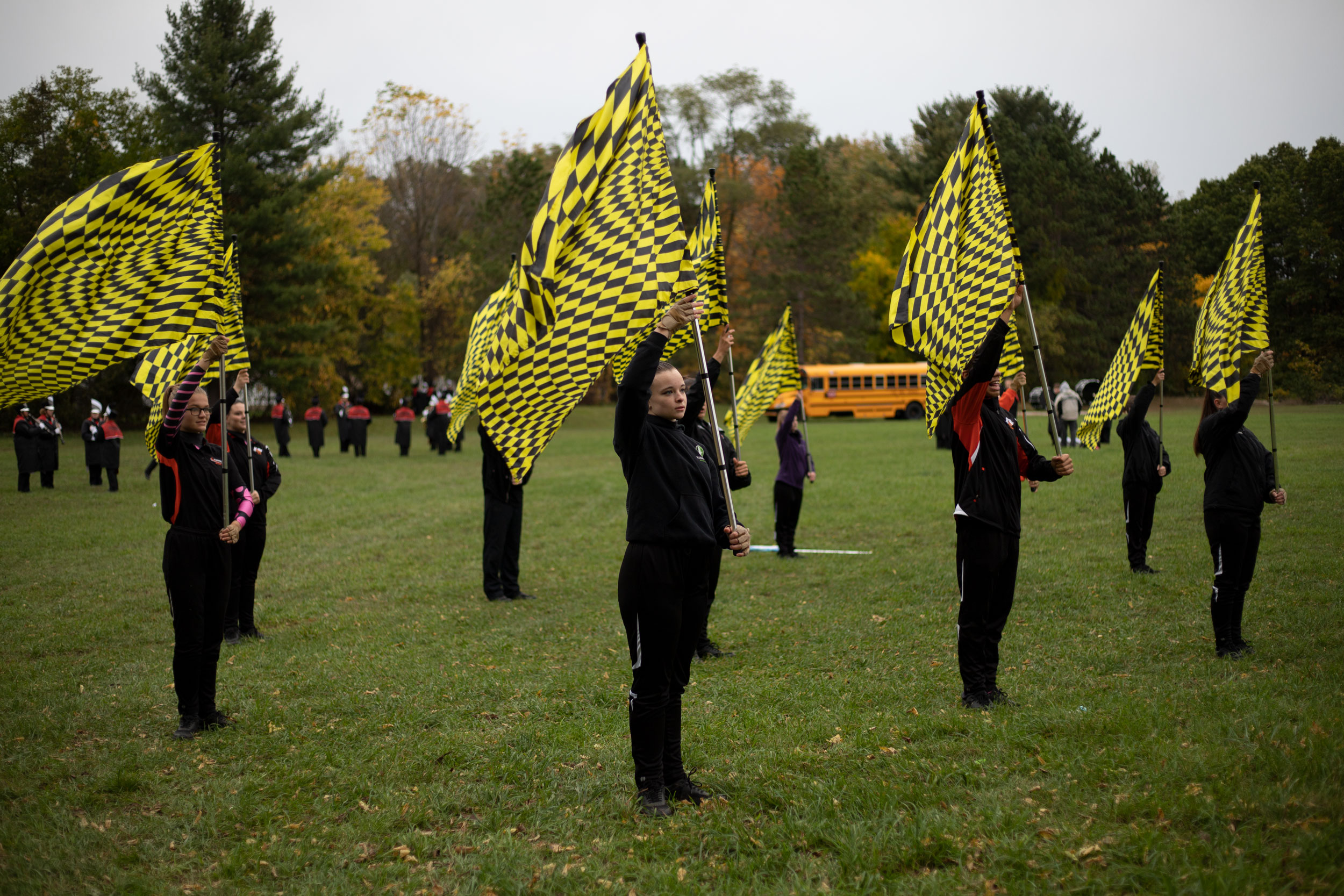 At competition, students and directors are evaluated on a multitude of elements. It’s all about precision. To determine a band’s overall score, it takes six judges – three musical and three visual. Two are out on the field with the students, evaluating movement, intonation and blending. They consider whether the students are all executing the music and motion in the same way. Music judges listen to the overall sound to determine whether the band is playing in tune and there is balance between sections. “When marching bands start working with the overall sound, physics comes into play,” explains Davis. “Sound from different areas of the field will hit your ears at different times. The phenomenon is called ‘musical phasing.’ For instance, one kid cannot trust sound they hear where they are standing – they have to depend on different cues. If they listen to the players in front of them, they will always be late. They have to know what to listen to at each spot, sometimes relying on the drum major’s hands to keep tempo. The show is always much harder than it looks.”

While the music judges listen, the visual judges look at the entire picture. Are the kids making the forms? Are they doing the count structures right? Are they stopping together? Does the movement fit the theme? 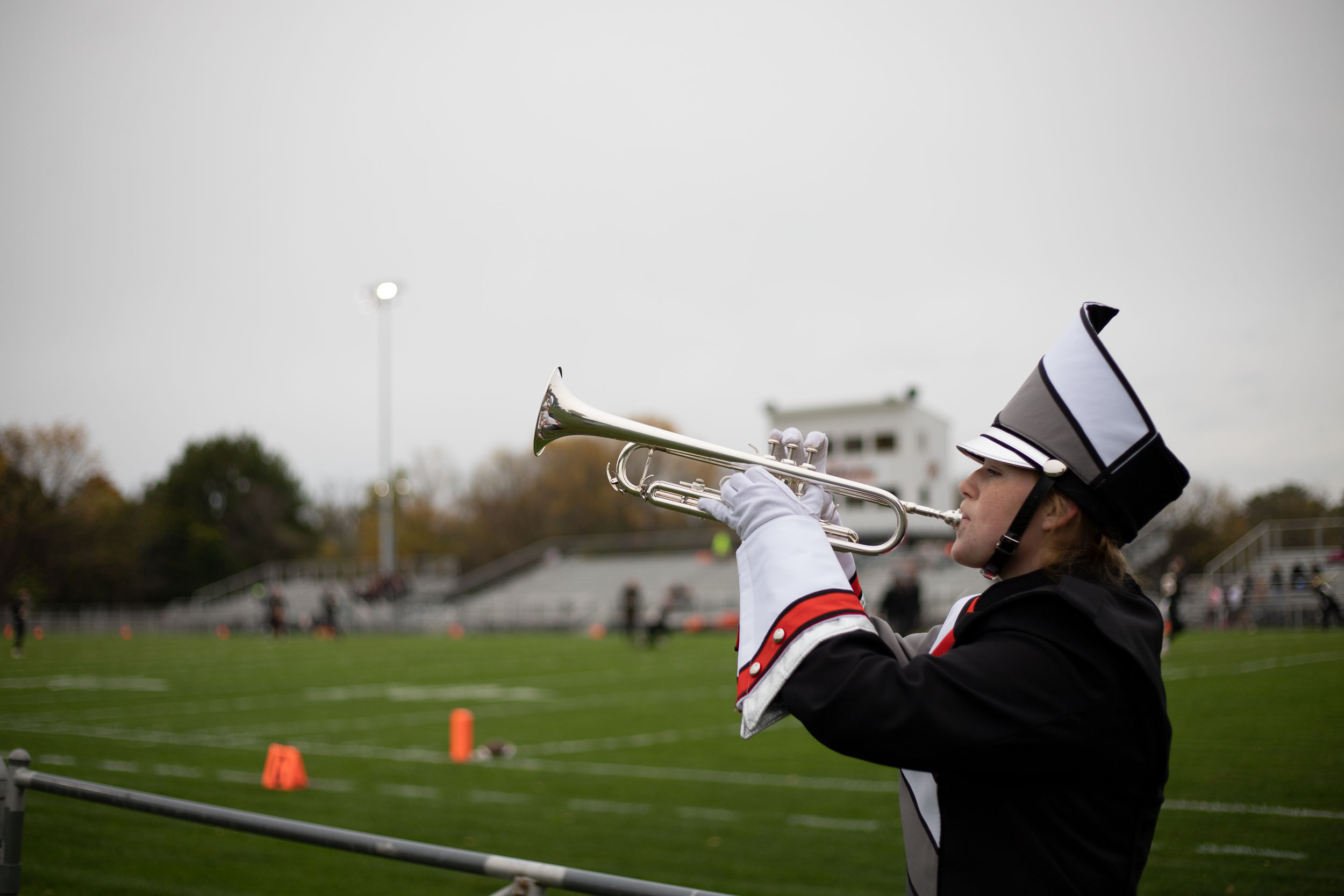 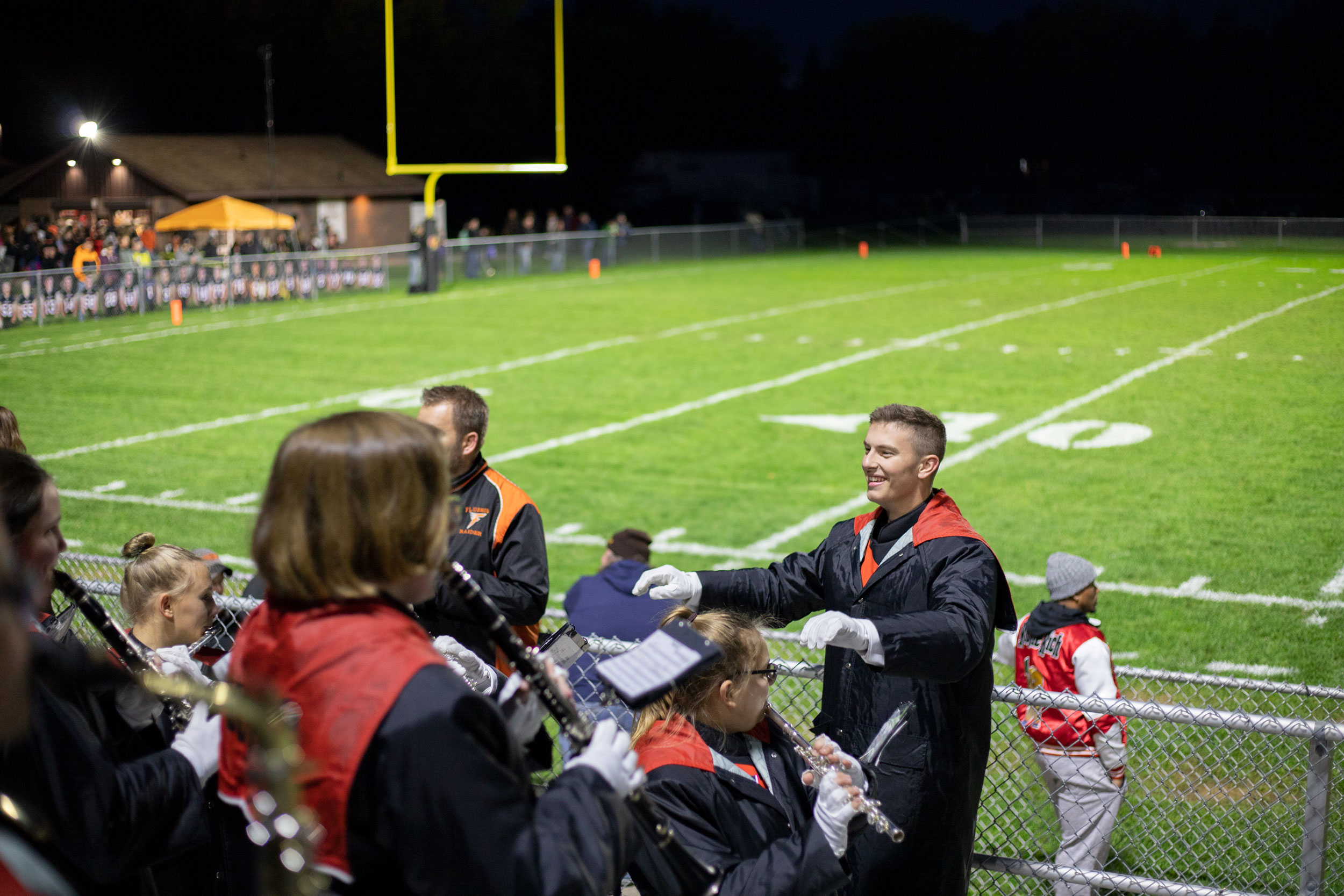 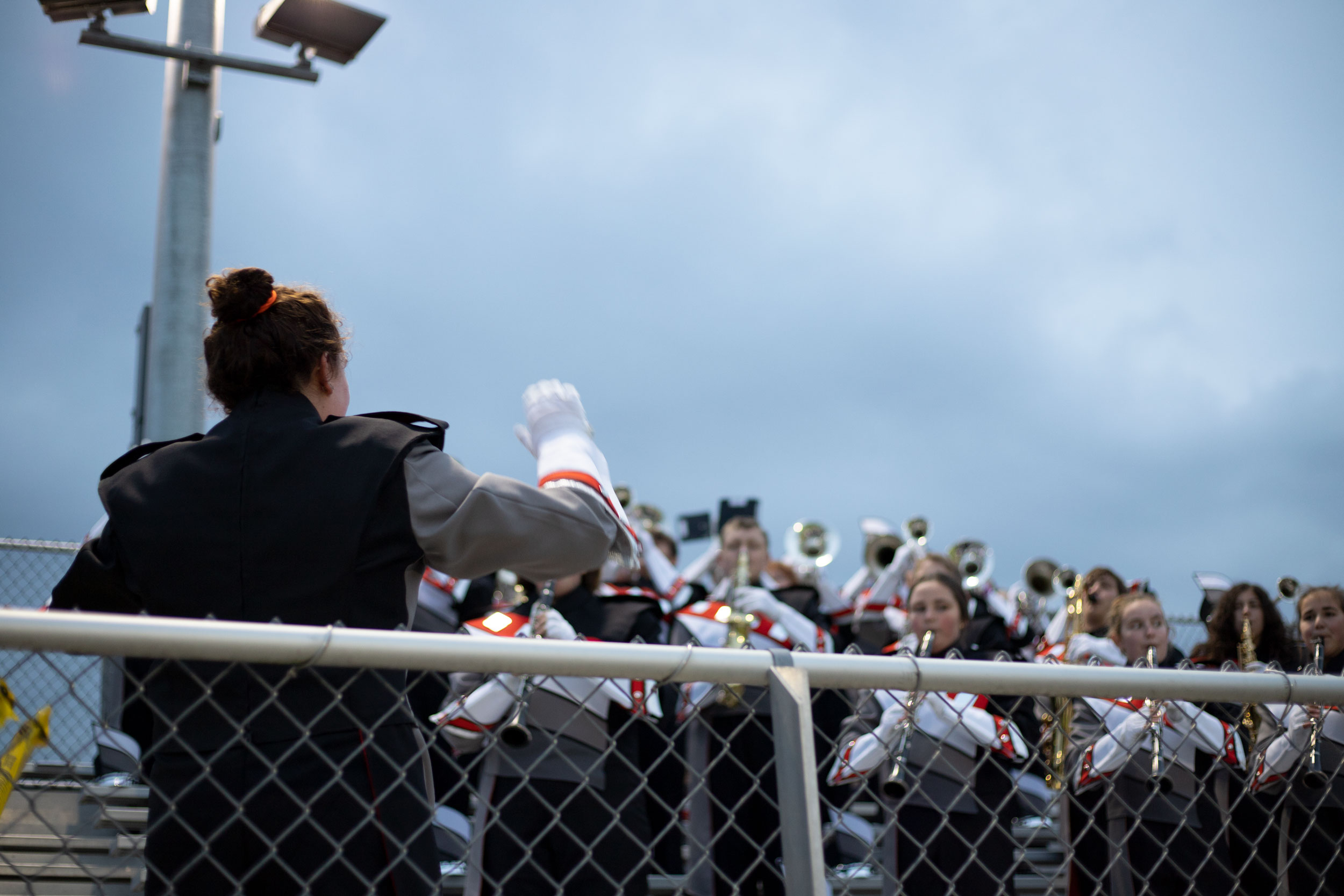 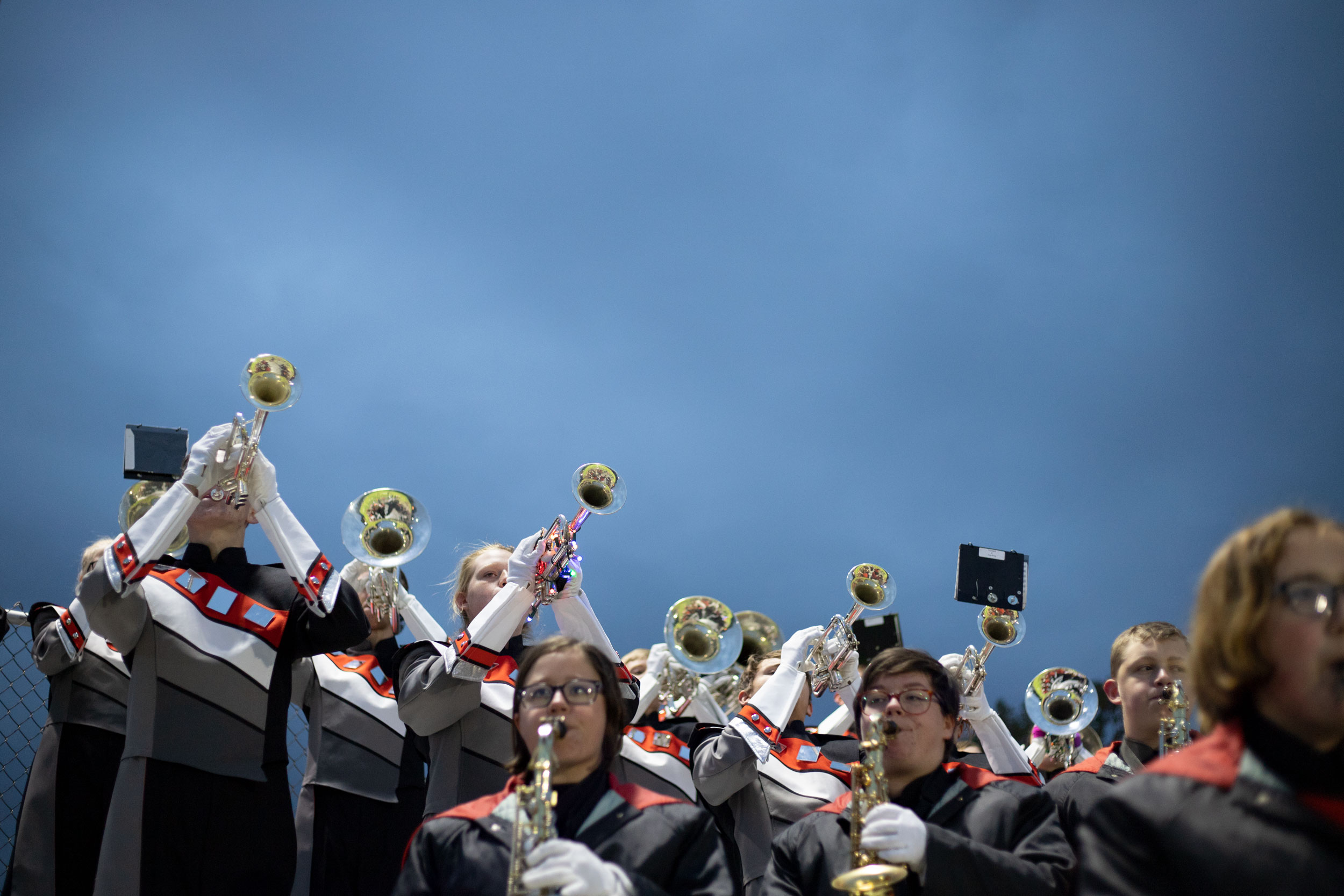 Finally, one judge is responsible for the general effect of the performance, checking for the coordination between the musical selection and the visual composition. Last year, Flushing Marching Band took third at State Finals, but Davis doesn’t put too much importance on their placement. He loves the competition for the education it provides. “We get feedback from every judge and we publish that for the kids and parents. There is so much education that goes into it. The way the band is evaluated is pure education,” he smiles.

A high school marching band is a huge undertaking that would not be possible without help from the parents. “A successful parent group makes a successful organization,” states Davis. “Parents fit uniforms, build props, help move props and instruments, and help raise funds. We have four minutes to get onto the field and set everything up for the show. This year, we have four 14-foot trampolines, yoga balls and giant fidget spinners. It’s a big operation! In competition, we get up to 31 parents to help – we couldn’t do it without them.” Eric Fontan is also thankful for the help of the parents and the community. “Parent involvement is the biggest part. The way the parents and community help these marching bands is the untold story,” he says.

“The way the parents and community help these
marching bands is the untold story.”
Eric Fontan, Assistant Band Director

At the end of the day, what makes Davis so proud of his program is the focus on student growth. One of the main skills the marching band stresses is time management. “We try to teach kids how to use the time wisely. When things get crazy, you have to organize your life. We want kids to succeed that way,” Davis says. “Parents tell us all the time that their kid was unfocused and unorganized before, and now they are the opposite.” Marching band members learn organization, leadership skills, discipline and dedication.

“When I watch the Olympic games,” says Fontan, “I think about the level of commitment Olympic athletes need in order to be great at their sport. Marching band is the beginning of that kind of commitment level. It means a lot to these kids to be there for their section and their band. It’s a true sense of responsibility.” Davis adds, “The best thing about the marching band is the leadership and life skills we focus on. I tell the kids all the time, ‘it’s not how you play; it’s what kind of people you are when you leave the organization,” he smiles. “Through music and performance, we try to teach them how to be a good person.” 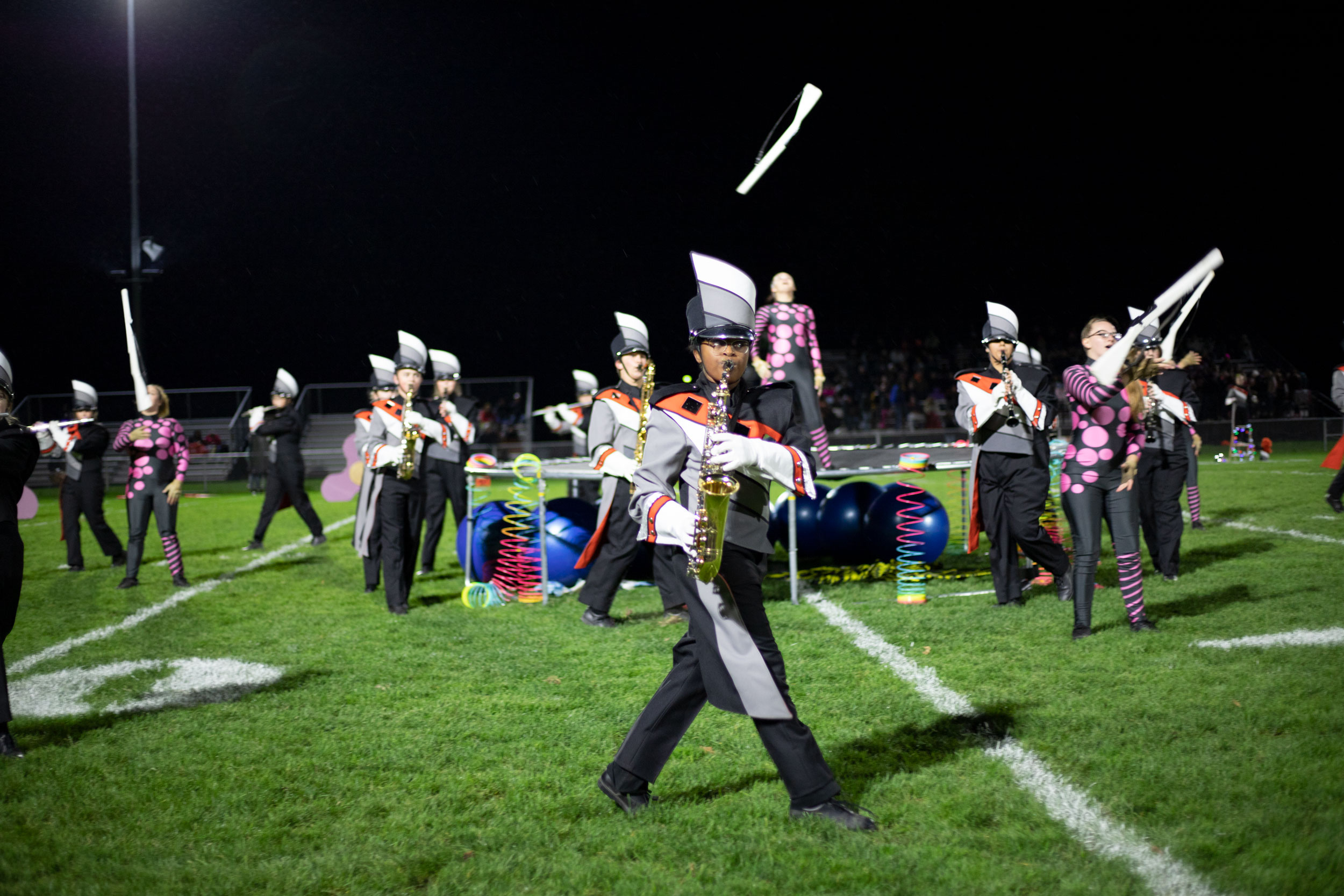 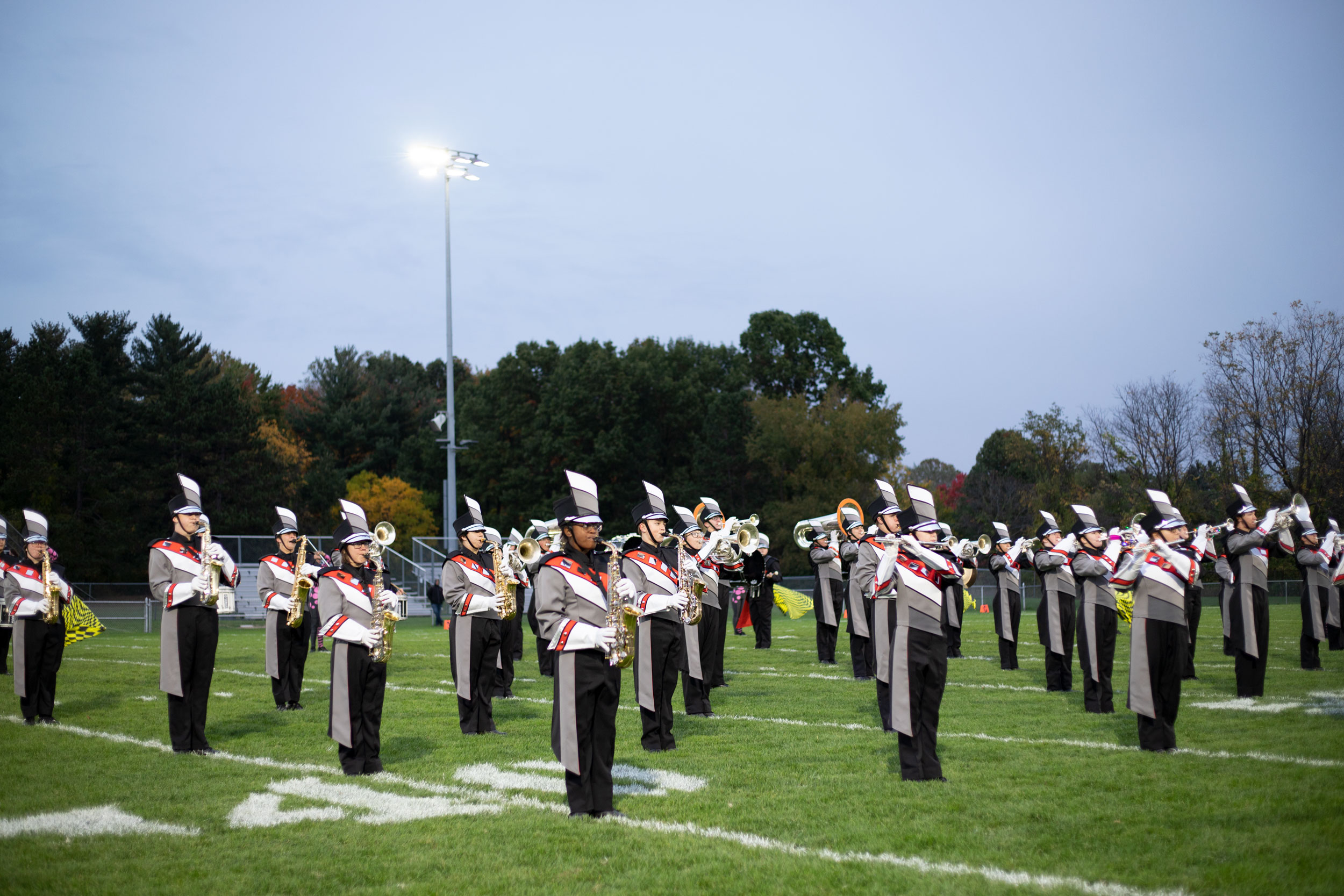 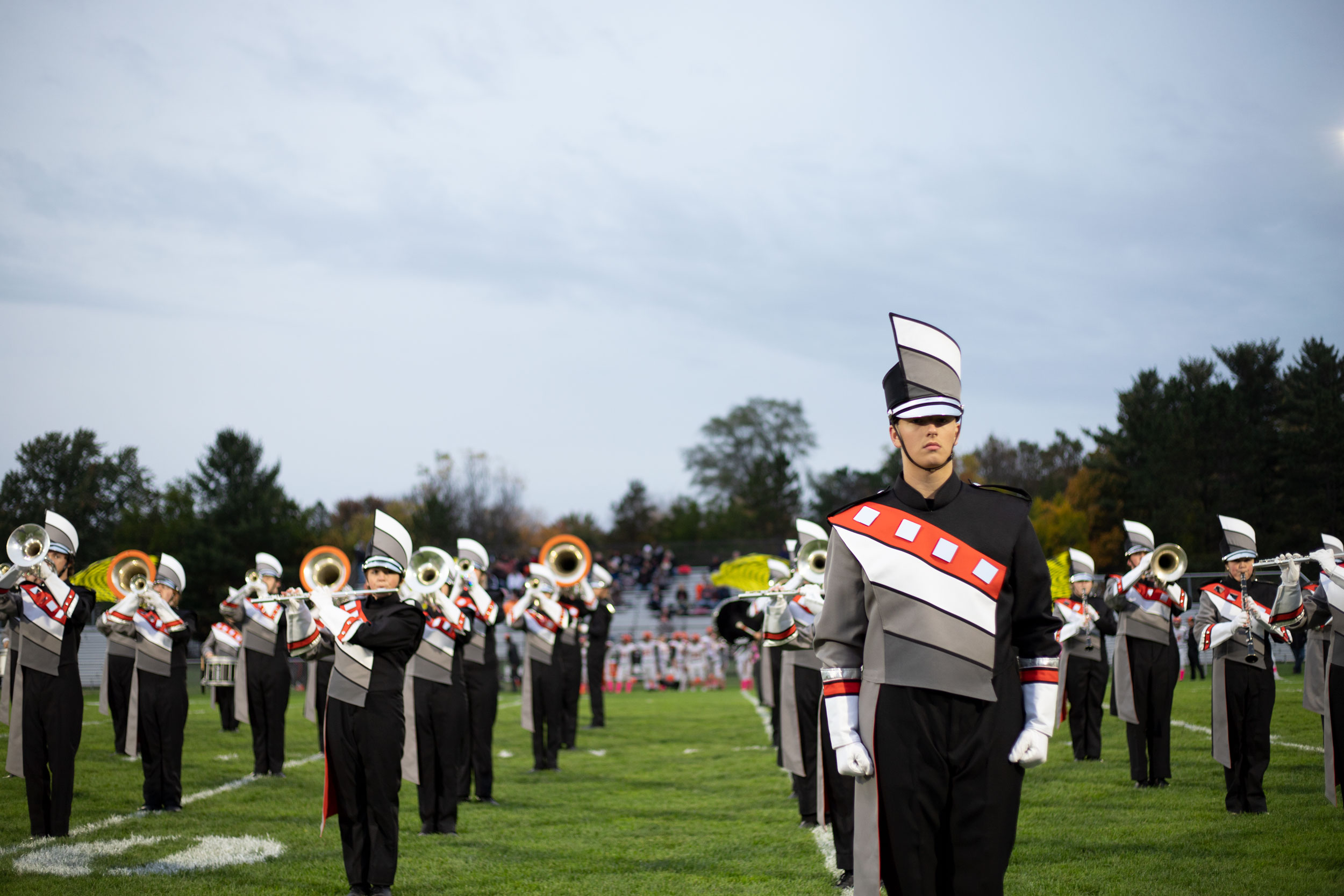