On an ideal evening for high school football in September of 2011, Woodberry Forest School junior quarterback, Jacob Rainey, took a snap during a pre-season scrimmage in Oakton, Virginia and as he scrambled for yardage, suffered a horrific injury.

The player, who had begun attracting college attention, lay on the field in agony, his right leg bent at a grotesque angle. Woodberry coach, Clint Alexander, rushed to Rainey’s side, clutching his hand and encouraging him through the frightening ordeal.

Rainey had ruptured an artery and doctors could not save his leg, amputating it just above the knee.
It appeared certain that Rainey had taken his final snap, but Alexander led an army of supporters who saw the young athlete through an extensive, exhaustive rehabilitation process.

A year later, Alexander tearfully embraced Rainey after he became the first known amputee to quarterback a high school team, taking the field for portions of several games during his senior season. Not surprisingly, Rainey’s remarkable story drew national media attention from the likes of ESPN and the New York Times.

That’s the kind of coach Grand Blanc High School is getting. 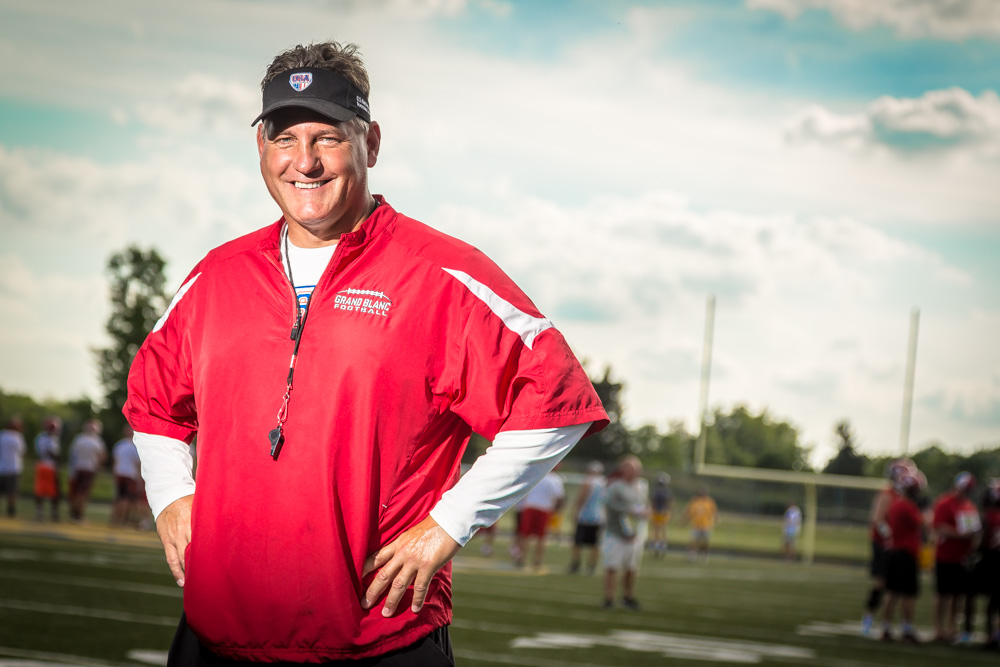 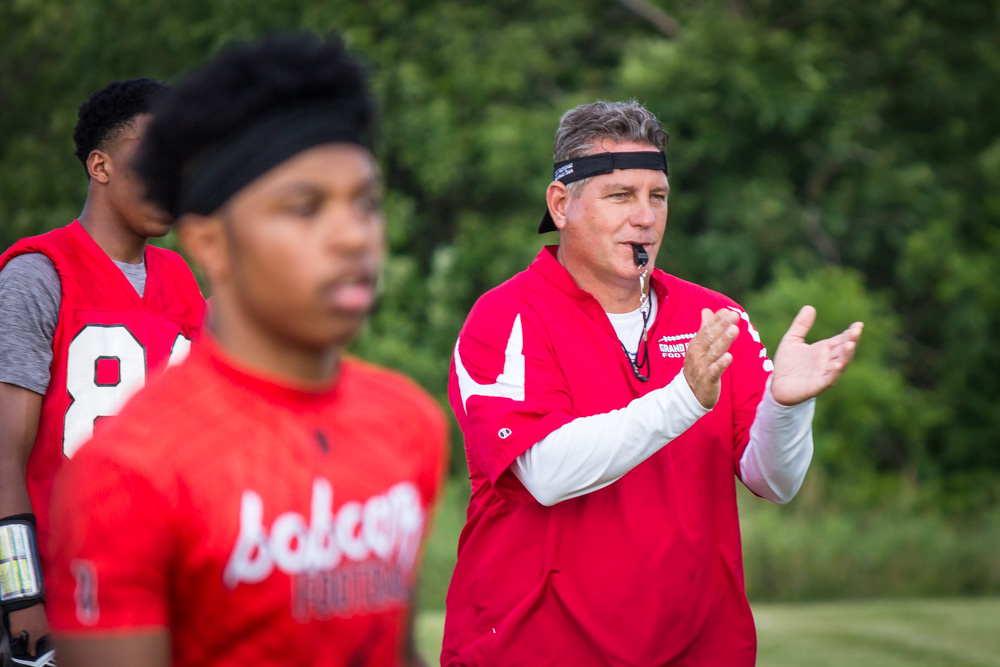 Alexander, who values building lasting relationships with players and their families just as much as winning, was named the Bobcats’ coach in February.

Alexander’s teams went 82-31-1, including a 9-1 last season when he was named Virginia Interscholastic Athletic Association Private School Coach of the Year. Woodberry also finished as the top-ranked private school in the state seven times and won nine league championships. 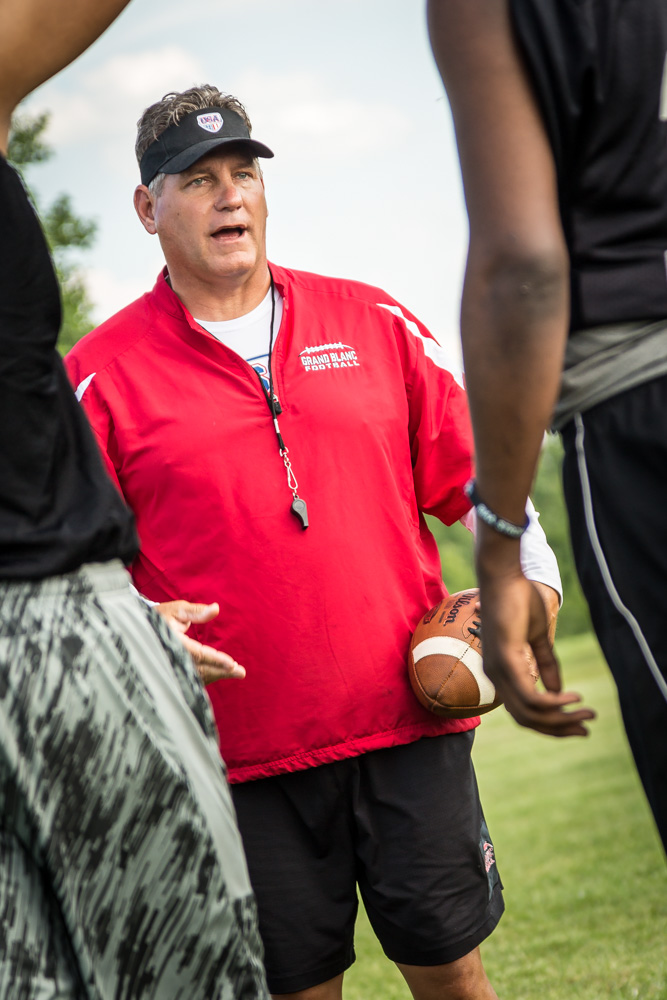 Overall, the 53-year-old Albion native boasts a 115-75-1 mark, including stints at Concord and Northville before leaving Michigan for Woodberry. He led Concord to its first playoff berth and a school-record ten wins in 2001, and also took Northville to the playoffs.

“I am very encouraged and excited by how things have been so far because the players are dealing with a lot of changes,” says Alexander, who will also teach World History. “We’ve had a great turnout and response to what we are trying to do as far as conditioning, which has helped me get to know the players well. We’re bringing back almost all of last year’s coaching staff which has helped the transition, too.”

While Woodberry drew gifted players from 30 states and several countries, its enrollment is nothing compared to Grand Blanc, the state’s second-largest public school with more than 2,600 students.

“We’ll have about 85 players on the varsity alone and there is no reason we can’t use that depth to go to a two-platoon system and keep everybody fresh during games,” he says. “The guys are preparing for the season very well. The school hiring Joe DeGain of 810 Crossfit to help the players with weight training and other conditioning has been amazing.”

Grand Blanc Athletic Director, Jerrod Dohm, has been thrilled with the frenzy of activity this summer.

“I’m really excited about the direction of the program and how the kids are responding to coach Alexander and his leadership style,” Dohm says. “We’ve had about 120 kids in the weight room on some days. That’s not just football players. The combination of what coach Alexander is doing and presence of the 810 Crossfit staff has led to other coaches getting their athletes into the training.”

Alexander’s enthusiasm for the job is underscored by the fact that he turned down an opportunity to coach one of the state’s more storied programs. Birmingham Brother Rice, winners of nine state championships in 13 trips to the title game, also extended an offer to him around the same time.

With two job offers in hand, he began the trip back to Virginia unsure of what to do. His conundrum did not last long, however, thanks to a stranger he encountered while traveling.

“We loved every second of the success we had at Woodberry, but I felt this was the right time to return to Michigan and started looking into coaching jobs late last year,” Alexander explains. “On the one hand, I felt fortunate to have two great offers, but it was the hardest decision I’ve ever had to make. On a bus at the airport, I shared my situation with an older lady and she had one question: ‘which place needs you the most?’

The answer was clear – Grand Blanc.”

An elated Alexander began contacting family members in Michigan, including his brother John, who lives in Northville, insisting the woman on the bus was channeling their late mother.

“I was like ‘John, I swear she was mom talking to me straight from heaven’ because that’s exactly what she would have said to me,” says Alexander. “My wife (Elaine) was very supportive and our homecoming became official because her family is from Brighton.”

Alexander tossed his hat into the Grand Blanc ring after hearing about the opening from one of his former Concord players, who now coaches at Olivet College.

“He told me there was an opening at Grand Blanc and that should I take a serious look, because it really might be the right place,” recalls Alexander, who then contacted Dohm and was encouraged to complete an online application.

“Right after we talked, I started doing research on Coach Alexander and found out he has an impressive body of work,” Dohm says.

The original pool of nearly 40 applicants were first cut to 14 and then to four final candidates, who were given video of last season’s opening game and asked to break it down and provide a game plan for the following week.

“What put Clint over the top was his experience and enthusiasm for football and the kids along with a solid track record of success,” Dohm says. “Everybody we talked to pointed to the great relationships he builds with the kids. When we hired him, we received a lot of calls from people at Woodberry congratulating us for making a great choice. That’s pretty extraordinary.”

“Get behind this man if you REALLY care about GB football!,” he wrote.

The players certainly have, including Division 1 receiving prospect, Donald Johnson.

“Coach Alexander is really passionate about football, cares about us as people and gives us the tools to be successful,” says Johnson, who has drawn interest from Boston College and Louisville. “He knows how to bring out the best in everybody and push your buttons to play well for him. I think we can go 9-0 (for the first time since 2009) and have a good playoff run.”

The Bobcats, who last won a playoff game in 2013, went 5-5 last season, falling to Davison in the first round of the playoffs.

Junior Colton Alexander, the youngest of the coach’s three children, was Woodberry’s kicker last season and is among the candidates to replace graduated All-Kensington Lakes Activities Association quarterback, Kevin Coriasso.

“I call my approach the Lego system, because we’ll build a gameplan that gives us the best chance to win each week,” says Alexander, whose Woodberry team averaged 44 points a game last season. “I like to run a lot of college stuff and we have some great tight ends we’ll take advantage of. We’ve also got some very talented defensive players we can build around.”

“I feel like I have one more program-build in me and hope to have some long playoff runs, because Grand Blanc has not made it past the regional final,” he says. “However, if the only thing the players remember about their time at Grand Blanc is their final record, I’ve failed. I want to create a great experience so that when I see them years later, we can talk about both their football days and where life has taken them since.”