Lacing up a pair of boxing gloves and stepping into a ring was the furthest thing from an 11-year-old Claressa Shields’ mind. She was too busy dealing with a difficult, at times transient childhood, and just trying to fit in at the Beecher School District’s Dailey Elementary.

The young Shields could be hot-tempered, which sometimes led to skirmishes at school. At the same time, she also enjoyed clowning around and play-fighting with friend Eddie Dean at Dailey, which they attended at the same time as current NBA rookies Kyle Kuzma (Los Angeles Lakers) and Monte Morris (Denver Nuggets).

One day, Dean suggested something which caught her completely by surprise. “Growing up, I was the biggest tomboy ever, so that’s why me and Eddie wound up just boxing playfully, but then he asked if I ever wanted to try boxing for real,” Shields recalled. “He said I didn’t fight like other kids because of the way I held my hands up, which I guess was different from other people. I had no idea.” 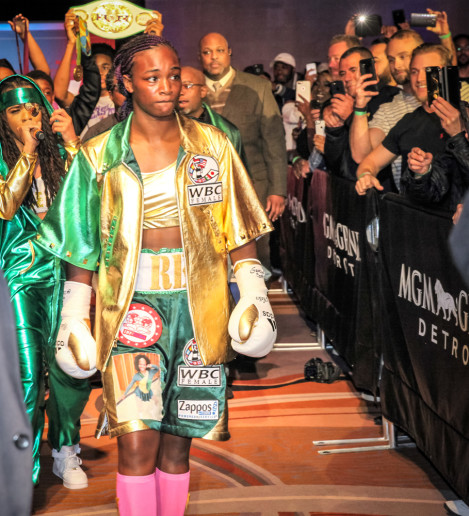 “Our boxing club has a lot of history with turning out champions,
especially in the amateur ranks,
and our way of doing that has been a perfect fit for Claressa.”
JASON CRUTCHFIELD, TRAINER

Dean, who later won a state Golden Gloves championship, invited Shields to accompany him to Berston Fieldhouse where he honed skills with the FWC Berston boxing program in a gritty, blue-collar, no frills basement gym. Shields accepted her friend’s invitation, but it was contingent on her father Clarence agreeing to sign a permission form. Clarence, an undefeated amateur boxer who later brawled for cash in unsanctioned, underground bouts, hesitated at first, but relented after taking a poll of family members.

Dean was thrilled, but felt compelled to make a wager with Shields before introducing her to FWC Berston trainer, Jason Crutchfield. “Yeah, he bet me ten bucks I would not last a week,” Shields said. That was 11 years, two Olympic gold medals, and four World Championship belts ago.

However, no matter how much history she makes, how many accolades she earns, or how many celebrities she associates with, Shields remains true to her Flint roots. They are too strong, too deep and too widespread for her not to. That’s why when it comes time to train in earnest for her next fight – tentatively slated for early December – the 22-year-old Shields will be training at the same gym, and running some of the same streets she did on school day mornings, before attending classes at Northwestern High School. 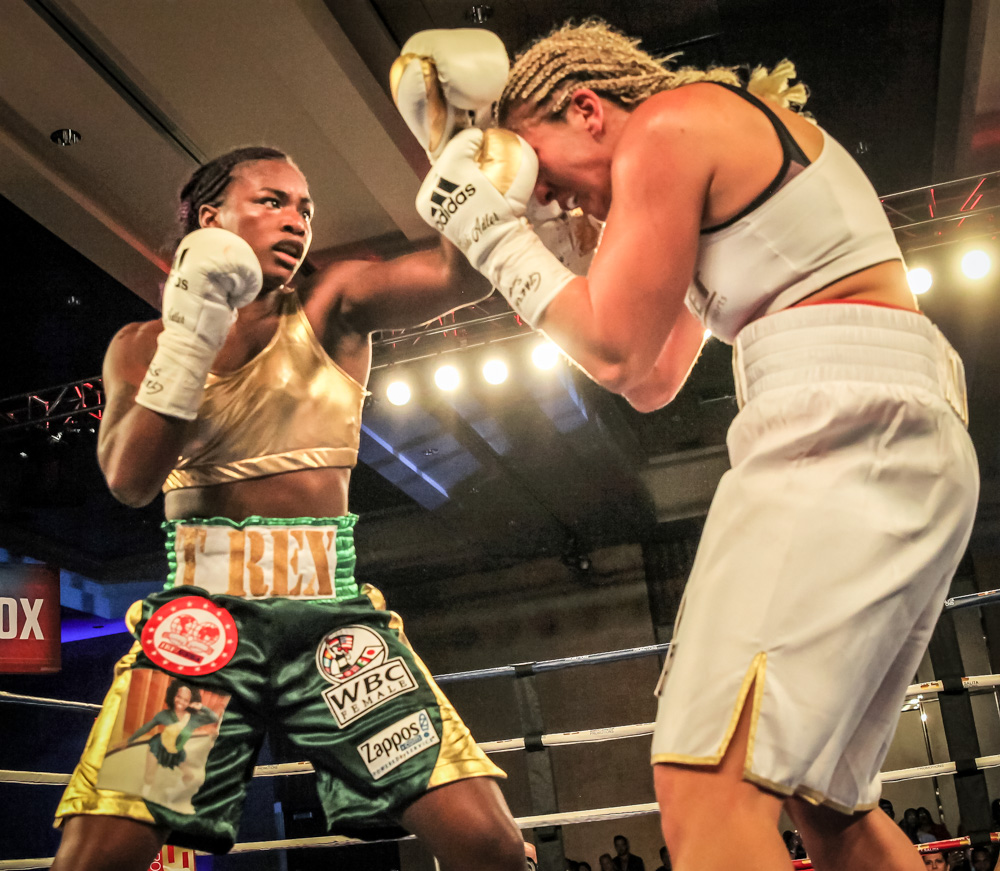 “Our boxing club has a lot of history with turning out champions, especially in the amateur ranks, and our way of doing that has been a perfect fit for Claressa. She’s comfortable continuing to train here because she knows we are always focused on improving and are never going to let her lose focus,” Crutchfield said of Shields, who has won her first professional bouts with ease after going 78-1 as an amateur. “Our style was to perfect her, and she responded by putting in the work. Claressa wasn’t the first female boxer we had, but she was the first one who lasted.”

It was not long before Crutchfield had no qualms about telling male boxers not to hold back when sparring against Shields. She welcomed that, often schooling more experienced fighters. “Sparring with guys 18 to 20 years old when I was 15, and giving them all they could handle, really helped me, too,” she said. “They were surprised afterward when they asked how old I was. They would be like, ‘What? I just went all-out on you’, and I would be like, ‘Yeah, and I just whipped you, too’!”

Shields did live and train at the United States Olympic Training Center in Colorado Springs prior to the 2016 Olympics, as various issues led to a two-year split with Crutchfield; but they were reunited after Shields won her first professional bout last November. Shields was elated after their differences were ironed out, allowing her to return to the venue and the trainer who helped turn her into an Olympic champion at age 17. 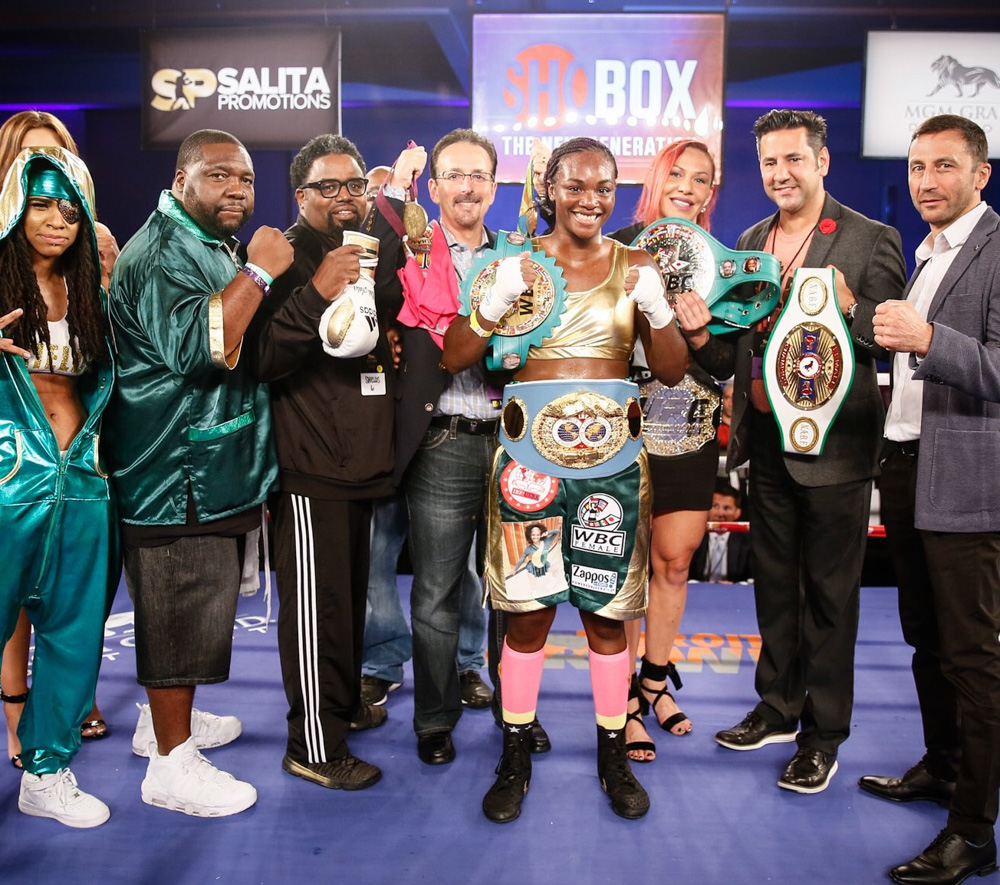 “Jason has been the perfect trainer for me, because he taught me so much about the sport and never lets me enjoy success very long before having me get back to work,” said Shields, the only American boxer, male or female, to win gold medals at consecutive Olympic Games. “I was the only girl when I first started, but Jason and the other coaches were accommodating and welcoming. I wanted to be successful at something, and found that with boxing.”

Shields has also been successful at giving back to her hometown. She handed out backpacks of supplies prior to the school year. She returned to Flint after winning her pro debut to help fellow Flint boxer, Andre Dirrell, an Olympic bronze medalist and current IBF Super Middle Champion, hand out 200 turkeys in 38-degree weather for nearly an hour outside of Berston’s back door.

“I give back to Flint for many reasons, and one is to show that you are never too successful to come back home and do things for the community – because I certainly come from humble beginnings,” said Shields, who lived with an aunt, her grandmother, and Crutchfield and his wife for a time growing up while her parents dealt with personal issues. “I want to do what I can to give them some hope and motivation to stay in school, graduate and make something of their lives. I also feel it’s important to accommodate anyone who wants to talk to me at these events or take a photo.”

It was the second time in less than five months that Shields headlined a Showtime boxing telecast. She is the only female boxer in history to do so. “What Claressa Shields has accomplished in less than one year as a professional is truly remarkable,” said Mark Taffet, Shields’ manager. “She has not only advanced her own career at record pace, but has single-handedly taken women’s boxing to new levels.”

Provided Shields wins her next bout (an opponent had not been named as of mid-September), those objectives include a showdown against unbeaten WBC and WBO Middleweight Champion Christina Hammer (21-0, nine knockouts) in 2018. “It’s certainly become easier to find opponents now that I have several belts and been on Showtime, because there are always going to be those who want to take my belts away and be on television in the process,” Shields said. “I just want to keep fighting the girls with the zeros on their records and clean up the 168-pound division (winning the WBA and WBO title belts) and then drop down to 160 to fight Hammer.”

Shields has been studying Hammer. “I don’t think I would have any trouble beating Christina Hammer, because she has not fought anyone of my speed, power and skill level,” Shields said. “I’ve watched the first, fourth, seventh and 12th rounds of some of her fights and her best rounds are 1-4. She slows down after that and becomes less of a threat. I know her weak spots.”

Added Crutchfield: “I was not impressed watching Hammer, because she makes her share of mistakes and mostly tries to score points by tapping and moving. Claressa knows how to slow down people like that.” Still, a Shields-Hammer fight would likely be the most lucrative women’s boxing match since Laila Ali decisioned Jacqui Frazier-Lyde in a 2001 bout that was the first women’s pay-per-view event. “We have carefully put together both short and long-term plans for Claressa, which will take her and women’s boxing to unprecedented levels,” Taffet said. “By the time she fights Christina Hammer, we believe it will be the biggest fight in women’s boxing history.”

Also looming is a possible rematch with Savannah Marshall, a British fighter who handed Shields her only loss, a 14-8 decision at the 2012 World Championships. The two appeared headed for a rematch at the Olympics three months later, but Marshall lost early in the tournament. Marshall, who won her professional debut on the undercard of the Floyd Mayweather-Connor McGregor fight, also lost too early to meet Shields at the 2014 World Championships and 2016 Olympics.

In July, Shields won the Nickelodeon Kids Choice “Biggest Powerhouse” Award, beating out Major League Baseball All Stars David Ortiz and Mike Trout, NBA All-Star DeMarcus Cousins and Super Bowl 50 MVP, Von Miller. “That means the kids voted for me more than some very famous athletes and it’s a good sign they are interested in women’s boxing,” Shields said. “The party afterward was nice because I was able to promote my upcoming fight against Adler and saw a lot of parents and kids putting reminders for it in their phones. I was thankful for all the support and made sure I talked to and took pictures with anybody who wanted to.”

That’s Claressa Shields: ever thankful for her success, but never satisfied with it.
Photos provided by Bob Ryder/Salita Promotions