When artist Vanessa German arrives at the Flint Institute of Arts later this month to install her exhibition, Miracles and Glory Abound, her third trip to Vehicle City will be a sort of homecoming. German first visited in spring 2018 in preparation for both her show – which, along with Engaging African Art: Highlights from the Horn Collection opens on January 27, 2019 – and a series of community workshops underwritten by the Hagerman Foundation. Those workshops, conducted over a week in July 2018, connected the multidisciplinary artist to the people and places of Flint. Kids from the Boys & Girls Clubs of Greater Flint, the young handcrafters of the Chosen Few Arts Council, and patrons and staff of the organizations that make up the Flint Cultural Center fashioned their own “power figures,” a term German uses to describe her own complex, connotative work. 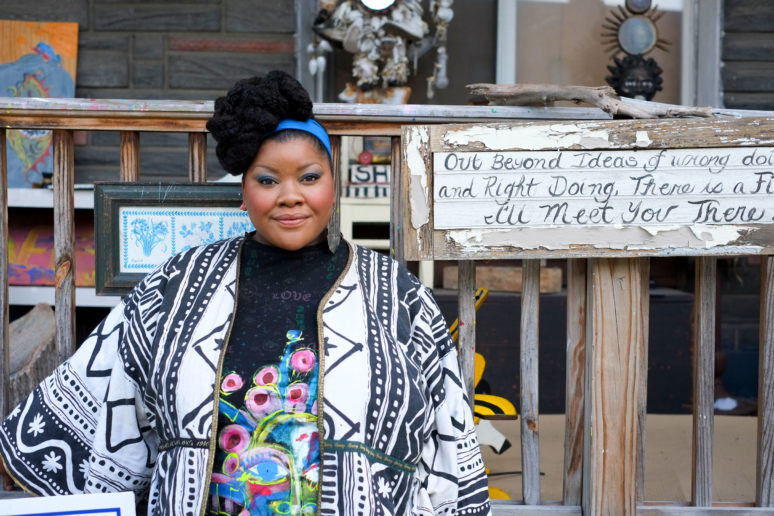 From ARThouse to Berston Fieldhouse, Vanessa German has created space for those leading what she calls “ordinary sacred” lives to embrace their need to produce art.

Stemming from the central African tradition of nkisi nkondi or minkisi figures, German’s power figures are assemblages of everyday objects. Everything from sockets to string, from fabric to finishing nails is found in her sculptures that celebrate, as Jaimee Swift of One Common Unity observed, “the profound majesty and dynamism of the Africana aesthetic.” That aesthetic has been percolating in German since childhood, growing up with a fiber artist mother who encouraged her five children to make art on a regular basis.

Born in Wisconsin and raised primarily in Los Angeles, CA, German now lives and works in Pittsburgh, PA, the site of two vital community art projects: Love Front Porch and ARThouse. Both projects, with their self-explanatory names, grew organically from German’s creative process. Living and working in her home, the low basement ceiling caused her to relocate to her front porch, where neighborhood kids regularly congregated to watch German create. She encouraged those who watched to get involved in making their own art and Love Front Porch blossomed. From there, ARThouse grew, a space that Swift described as “an artistic sanctuary radical, holistic healing and safe-care” and that the artist herself sees as linked to her role as a citizen artist. Homewood, Pittsburgh’s historic African American neighborhood, is not only the location of German’s home and studio, it is an immutable source of inspiration. As Pittsburgh Magazine writer, Eric Lidji, said in a 2016 profile piece, “(Homewood’s) fortunes and tragedies inspire her. Her art nourishes and glorifies the neighborhood.”

After touring Flint’s neighborhoods and public spaces and working hands-on with its citizens, German returns to both install her exhibition in the Henry Gallery and perform at the 12th Annual Community Gala on January 26. Visitors to Miracles and Glory Abound will see something familiar, but simultaneously wholly new. Drawing from Emanuel Leutze’s 1851 painting, Washington Crossing the Delaware (on view in New York City’s Metropolitan Museum of Art), German reimagines the iconic image using her power figures to create, as the winter issue of FIA Magazine notes, “a conversation about public memory and the rewriting of history through the lens of privilege.” That conversation may also spill over to more recent historical (and ongoing) events, such as the Flint Water Crisis, as water is integral to another piece included in the exhibition, titled No Water Cleanser. German, who describes her performance style as “Spoken Word Opera,” wrote the following about that sculpture: 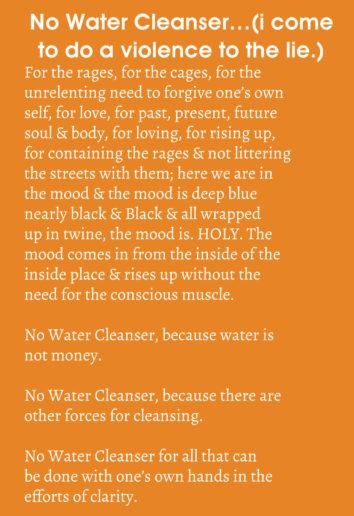 From ARThouse to Berston Fieldhouse, German has created space for those leading what she calls “ordinary sacred” lives to embrace their need to produce art. On the day before her exhibition opens to the public, she will work one-on-one with students in the FIA Art School to create their own power figures to take home, so that Flintstones can embrace their citizen artistry. As she poignantly asked in 2016, “Why couldn’t being a generative human citizen mean that ideas that you have could have an impact in the world we live in now?”

The 12th Annual Community Gala will take place on Saturday, January 26, 2019 from 6-9pm. Tickets are $40 in advance for FIA members, $60 for non-members. On the day of the event, tickets are $55 for FIA members, $75 for non-members. The evening includes a preview of Miracles and Glory Abound and Engaging African Art: Highlights from the Horn Collection, a performance by Vanessa German, a reception with live music, a strolling supper and a cash bar, as well as complimentary valet parking. All proceeds from the event support FIA exhibitions and programming. Tickets can be purchased by calling 810.234.1695 or at flintarts.org.