It’s Christmas every day at Old Newsboys of Flint. Decorations hang on the walls year ’round and a life-like Santa stands in the entryway. You can almost hear him saying, “Ho, ho, ho! Merry Christmas!” The warehouse is filled to the brim with coats, hats, mittens, gloves and other items for children’s Christmas boxes. 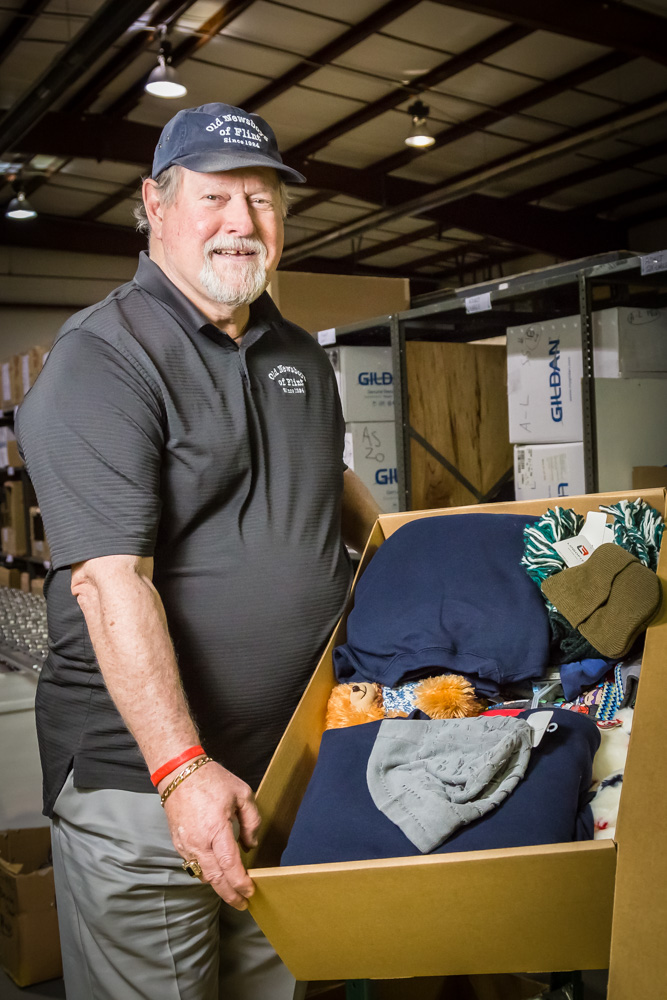 As he greets you with a warm smile and a handshake, Executive Director, Chris Hamilton, is as jolly as Santa himself. Making sure that no child is forgotten on Christmas Day has been his passion for many, many years.

That passion for giving began at an early age. Chris grew up in Linden, the son of a doctor. “My dad delivered over a thousand babies!” he exclaims. “He was just a country doctor and I would go with him on house calls in the middle of the night.” When the telephone rang during the wee hours of the morning, Chris would shout out, “Dad, does somebody need you? Can I come along?” On many occasions, those who had received help from the doctor would pay for the services by plowing the driveway or bringing firewood to the Hamilton home.

His mother, too, was always doing something for someone else. Chris would come home from school to the aroma of a pie baking in the oven and would ask, “Mom, who died?” According to Chris, both of his parents were very giving and never expected anything in return. “I definitely got my devotion to service from my dad and mom,” he shares.

Chris attended Purdue University on a football scholarship, and played in the Boilermakers’ only Rose Bowl-winning game against Southern California in 1967 – a 14-13 victory. He graduated in 1969, but there were no teaching or coaching jobs available in Michigan at the time. “I had to work somewhere,” Chris says. “So, I applied at the GM plants, and AC Spark Plug hired me.” He and his wife Joyce have two children, David and Lori, and a 12-year-old grandson, Isaac.

When he first started working at AC, Chris became involved in raising money in the plants for Old Newsboys. In 1985, he sat on the ONB Board of Directors. He was approached by Board member, Paul Nelson, who said to him, “How about you run the program at AC and take my place on the board of directors?” The rest is history. Chris became President of ONB in 1995 and had also served in the position of secretary and treasurer for ten years. He ran the program at AC Spark Plug until he retired in 2007. But his service didn’t stop there. In November 2008, the former executive director of ONB retired. “I took her place,” says Chris. That was the same year the organization moved to its location on Taylor Drive.

Chris has continued to serve as the executive director since then, making sure that kids are not forgotten at Christmastime. “The thought of kids going without is heart-wrenching,” he laments. Last year, ONB provided 6,436 Christmas boxes. Each box contains a sweatshirt and sweatpants, underwear, socks, a knit stocking cap, 3M Thinsulate gloves, dental hygiene products, and an age-appropriate gift (ranging from newborn to teens). They also provided approximately 500 brand new winter coats and 500 pairs of New Balance tennis shoes. The kids pick out their own coat, hat, mittens and scarf. 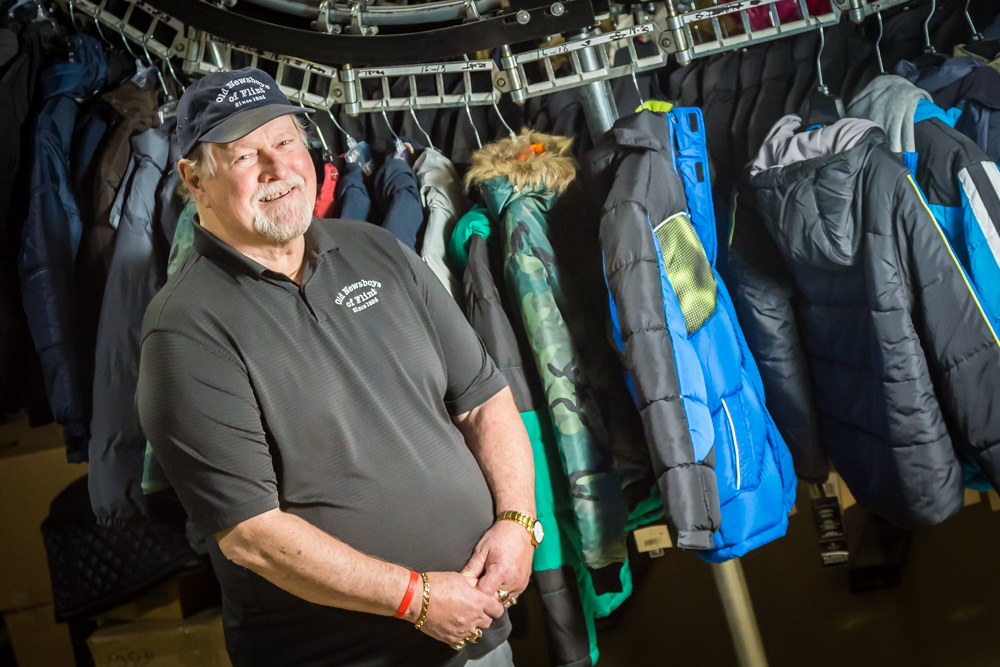 In his spare time, Chris is busy planning fundraisers for ONB. “Yep, that’s what I do in my spare time,” he says, laughing. The number of fundraisers has increased; there used to be 7,000 GM workers who provided assistance to ONB, but that number has decreased. “Now, we raise the money to get what we need,” he adds. The 92nd Annual Newspaper Sale – the organization’s biggest fundraiser – will take place on December 9 this year. ONB also has a “Sponsor a Child” program. Various area businesses are displaying a Christmas tree poster – purchase a “bulb” for $20 and provide one child with a Christmas box. You can also sponsor a child by calling ONB at 810.744.1840.

The director continues his passion for helping kids, but he doesn’t do it alone. “I have the best staff and the volunteers are out of this world,” he admits. “Not a week goes by that I don’t hear someone in the community tell me, ‘If it wasn’t for ONB, I wouldn’t have had a Christmas.’ That tugs at my heart strings and keeps me going. I have the best job in the world.”

Chris says that Genesee County is a very giving community. “The generosity is overwhelming. It’s an outpouring of love,” he shares. “It just kills me that there are kids out there who will have no Christmas presents. If I could change the world, every child would have a gift to open on that special morning.”