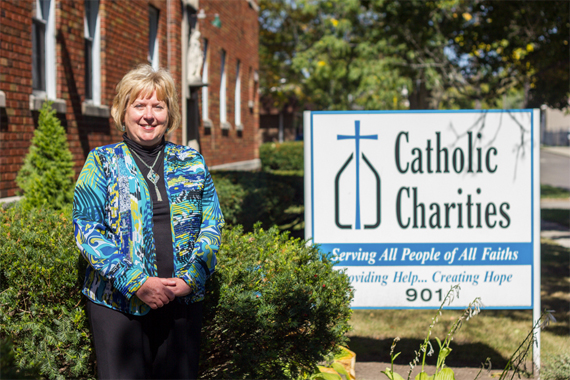 There are those in Flint whose lot in life is grim, but thankfully for the scores of people who fall on hard times, there are a host of services sprawled throughout town to help. In fact, thanks to her charitable citizenry, Flint has a long history of providing sanctuary for the poor.

A wonderful example of Flint’s benevolence is Catholic Charities of Shiawassee and Genesee County, an organization that has stood for 72 years and shows no signs of shutting its doors. Like that of a fine wine in the chalice, Catholic Charities is getting better with time. The septuagenarian organization started in 1941 under the name Catholic Social Services, and its current 901 Chippewa location once served as a nunnery and parochial school. Although ownership changed hands over the years, the school is once again under the direction of its original catholic parentage, and its function is just as socially engaging today as ever. Catholic Charities is always looking for ways to ease the difficulties of the afflicted through both reactive and preventative programs. The list of over 30 services available at Catholic Charities includes family counseling for a variety of personal and financial needs and child services, including assistance with adoptions. Prevention and education services range from mitigating substance abuse to promoting healthy diets and lifestyles, and all of this while addressing the basic needs of food, clothing, and shelter for the poor among us.

Vicky Schultz has been the President of Catholic Charities for over six years, and her mission is simple: “I want to take care of my own community first,” she says. Schultz is not one to shrink away from the crippling poverty she encounters every day. She is zealous about helping the needy in her backyard because she knows that concentrated effort devoted to a single cause yields a better result than trying to help everyone and spreading yourself too thinly to be effective. Not everyone understands the truth of this principle. Vicky remembers a local news reporter calling her after the 2012 earthquake in Haiti to ask whether Catholic Charities was going to assist in some way. “When I told him we weren’t doing anything, he hung up on me. I immediately called him back to let him know how I felt about that. I was very mad. I inquired as to why the newspapers weren’t concerned with reporting on those who are helping the poor here in town. After that call, they gave us a week’s worth of coverage.”

A fearless advocate for the vulnerable, Schultz addresses needs first and sorts out the details afterward. For instance, many know that Catholic Charities provides a warming center for the homeless and for those who can’t afford heat during the winter months, but what many don’t know is that the warming center’s origin was a bit of a fluke. One day, Schultz watched as those who received their food in the kitchen stood on street corners in the cold to eat it. She marched over to a fellow staff member serving in the kitchen and stated, “It’s warm in here, so let’s make space for them.” In a classic, it’s-easier-to-ask-forgiveness-than-to-ask-permission style, Schultz created a warming center on the spot. Although the aftermath was severe – it took a lot of convincing to get others in Catholic Charities on board and a lot of time to work out the logistics and make the effort sustainable – the time gap between the idea and its execution was a matter of minutes. For us, this feat is nothing short of impressive, but for Schultz, it’s commonplace. She says that it’s best to “serve the client first, and figure out the logistics second.” Last winter, 12,000 people visited the once hastily put together warming center.

Schultz’s motto is, “If we can possibly do it, we’re going to do it.” With this in mind, Catholic Charities partners with numerous other organizations in the city, including Ebenezer Ministries, My Brother’s Keeper, Bread of Life Deliverance Ministries, and Genesee Health System, just to name a few, in order to address the needs of the people. With active partnerships such as these, Catholic Charities is moving toward their goal of centralizing the numerous services rendered in the city in order to keep the poor from having to travel throughout town for help.

Indeed, the aforementioned partnerships are vital to the function of Catholic Charities, but the most important partners, the ones who cannot be overlooked, are the everyday people: the residents of Flint and Genesee County. One such resident is Ethel Hooker of Flint. Hooker comes in faithfully every Monday and Friday to assist with the Community Closet, which allows the public access to free clothing. She is a longtime volunteer in the Flint community. At 83, she counts herself blessed to have been granted a long life and the opportunity to help others. “There is a great need, and it takes a lot of people to do this. If I can be a small part of it all, it gives me a sense of purpose,” she says.

Mary Stevenson is Development Director at Catholic Charities; she and her team of helpful hands are often the ones putting Schultz’s ideas into action. Stevenson related a story of when the organization was featured on the news at a time when they were in need of blankets. “It seemed like even before the newscast was over, people were already showing up to deliver blankets. Many people talk about not wanting to come Downtown, but they do. They really do come out to give.”

That statement seems like the most telling part of this benevolent adventure. Catholic Charities doesn’t exist in Flint because there is an abundance of need; it exists in Flint because there is an abundance of goodwill toward man. The organization is sustained by the collective efforts of a community. It may be Catholic in name and tradition, but over 90 percent of those served are not Catholic, and a staggering amount of its support comes from the Protestant and secular populace alike. Catholic Charities of Shiawassee and Genesee County is and will ever be a staple in Flint, even if the day came in which the city was without the poor. This community will always give to support herself through the collective efforts of the people herein. We work as one here, and for this reason, we are proud to be among the few people in the world who can say, “I’m from Flint.”

Are you interested in purchasing photos from this story? Go HERE and select the “Catholic Charities” category.