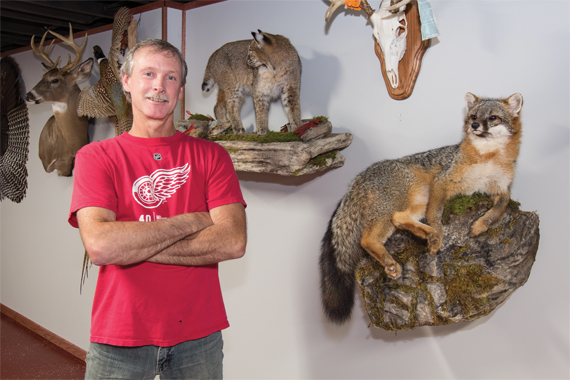 Taxidermy is the art of preparing, stuffing and mounting the skins of animals to create a lifelike effect for display, and taxidermist Terry O’Connor has a passion for bringing animals back to life!

The owner of O’Connor Taxidermy in Clio, Terry grew up hunting and fishing with his dad and three brothers. He first became interested in taxidermy when he was just 12 years old, thanks to his Uncle Bob, an avid hunter and fisherman. Terry was reading an issue of Field & Stream magazine and saw an advertisement for a correspondence course on taxidermy. So he saved his pennies and purchased the course for $12. “I learned the basics there,” he said. His first mounting project was a small, ten-inch Bass that he had caught himself, and from then on, he says he was hooked. “I’ve learned by trial and error,” Terry explained, adding that this is the process for many who pursue taxidermy as a vocation. Terry’s second challenge was a pheasant he had shot when he was 14, which was a larger and more difficult undertaking than he had expected. He recalls being tempted to give up his dream, but instead of quitting, he tried working on a few smaller birds with much better results, which encouraged him to keep with it.

As he got older, Terry continued to hone his skills by renting instructional videos through taxidermy supply catalogs. He was entirely self-taught until last year, when he was given the opportunity to work at a shop in the Clio area where he learned the finer details of the craft, and gained experience with large African and exotic animals. The creatures he worked with included a wallaby, wart hog, crocodile, impala, buffalo, and red stag, to name a few. His biggest undertaking at the Clio shop was a full-mount giraffe, which he says was “quite the project.” Terry now has a workshop at his home, and he says his busiest time is October through December, during the fall and winter hunting seasons. He reports that his clientele has grown considerably in the last year and that operating out of his home allows him to create top quality work at a lower cost to his customers.

Terry’s favorite animal to work on is the white-tailed deer. “I know more about white-tails than any other animal,” he said. “I try to reproduce them in their natural habitats to make them look alive.” The work is very tedious, and it takes hours to finish a piece. “And I’m still learning,” he laughed. “I’m always learning something new.” Terry brings a lot of creativity to his craft, often choosing natural settings for the animals using pieces of driftwood and other items from nature. His workroom is filled with pieces he has completed, including deer, bear, birds, a fox, and a cougar. “I like making an animal look like it did in the wild,” he says, “and I love taxidermy’s artistic aspect.”

Are you interested in purchasing photos from this story? Go HERE and select the “Taxidermy” category.