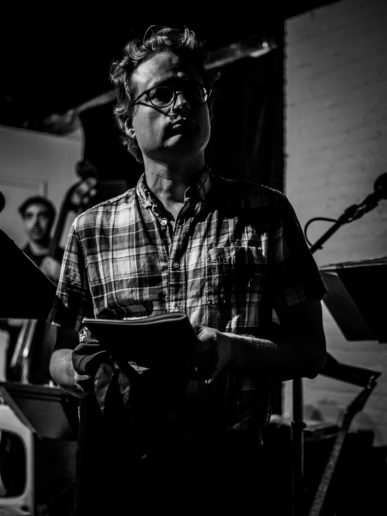 It was 1984, 1:00am – a gunshot rang out in the parking lot of Flint’s Buick City. Wayne Collins was murdered and the killer was never found. The Collins family was left devastated. Wayne’s son, Skip, would commit suicide and his daughter, Elena, would forever ask what her life would have been, had the tragedy never occurred. Elena, however, would get the chance to change the past. In the future, she is gifted with a chance to travel back in time, and if she can find her father’s killer before that fateful night, she can perhaps make a better future for her family. Will she succeed? Who killed Wayne Collins … and why?

“Buick City 1AM” is a serial podcast conceived and written by Flint native, Jason Cady. The delightful and thought-provoking murder mystery is set in the city of Flint in 1984, during the second Presidential election of Ronald Reagan. Cady combines the feeling of a 1920s crime noir, with the expression and emotion of opera music, which creates an enchanting and unique experience for listeners. The podcast is truly one-of-a-kind. 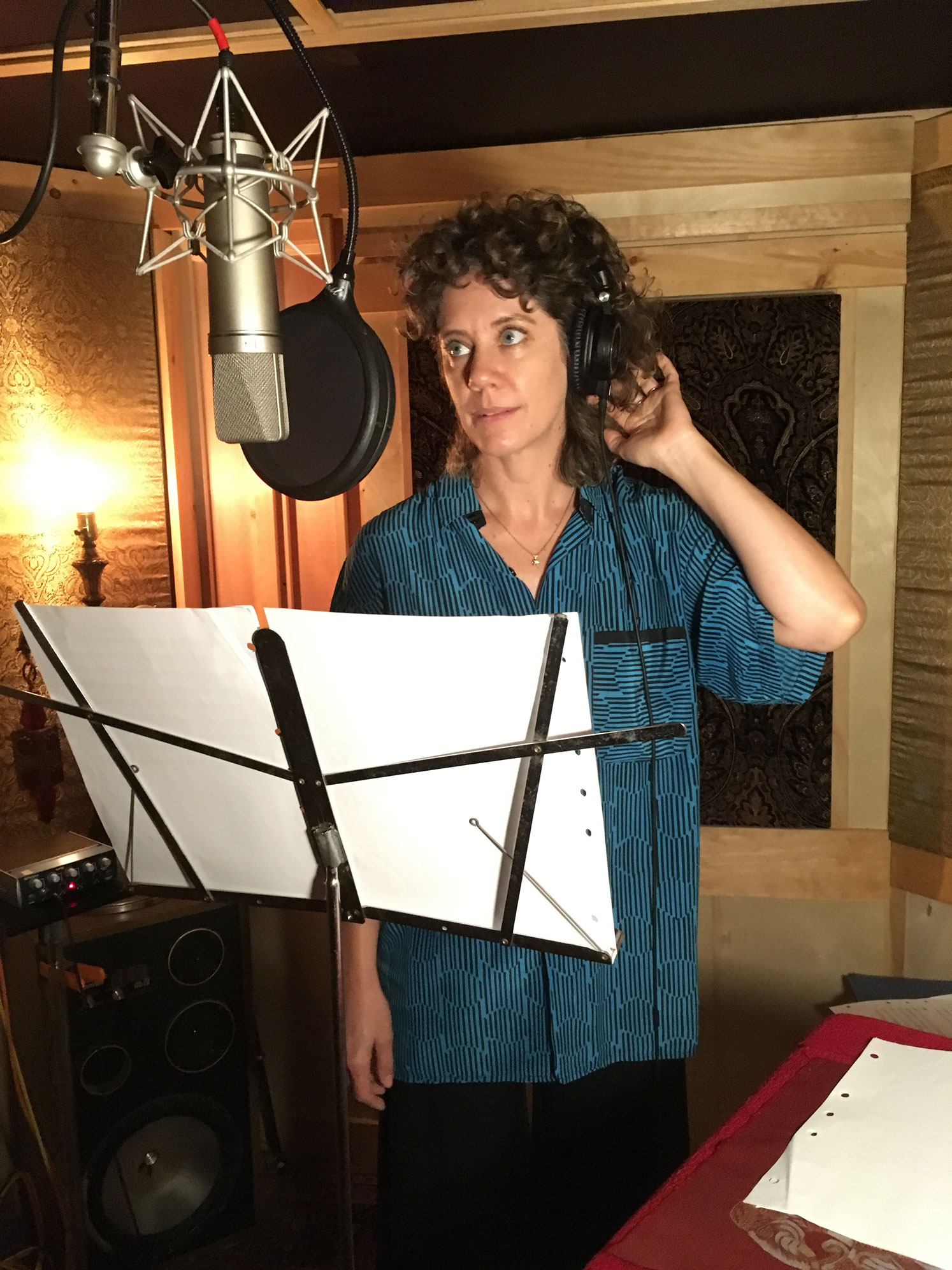 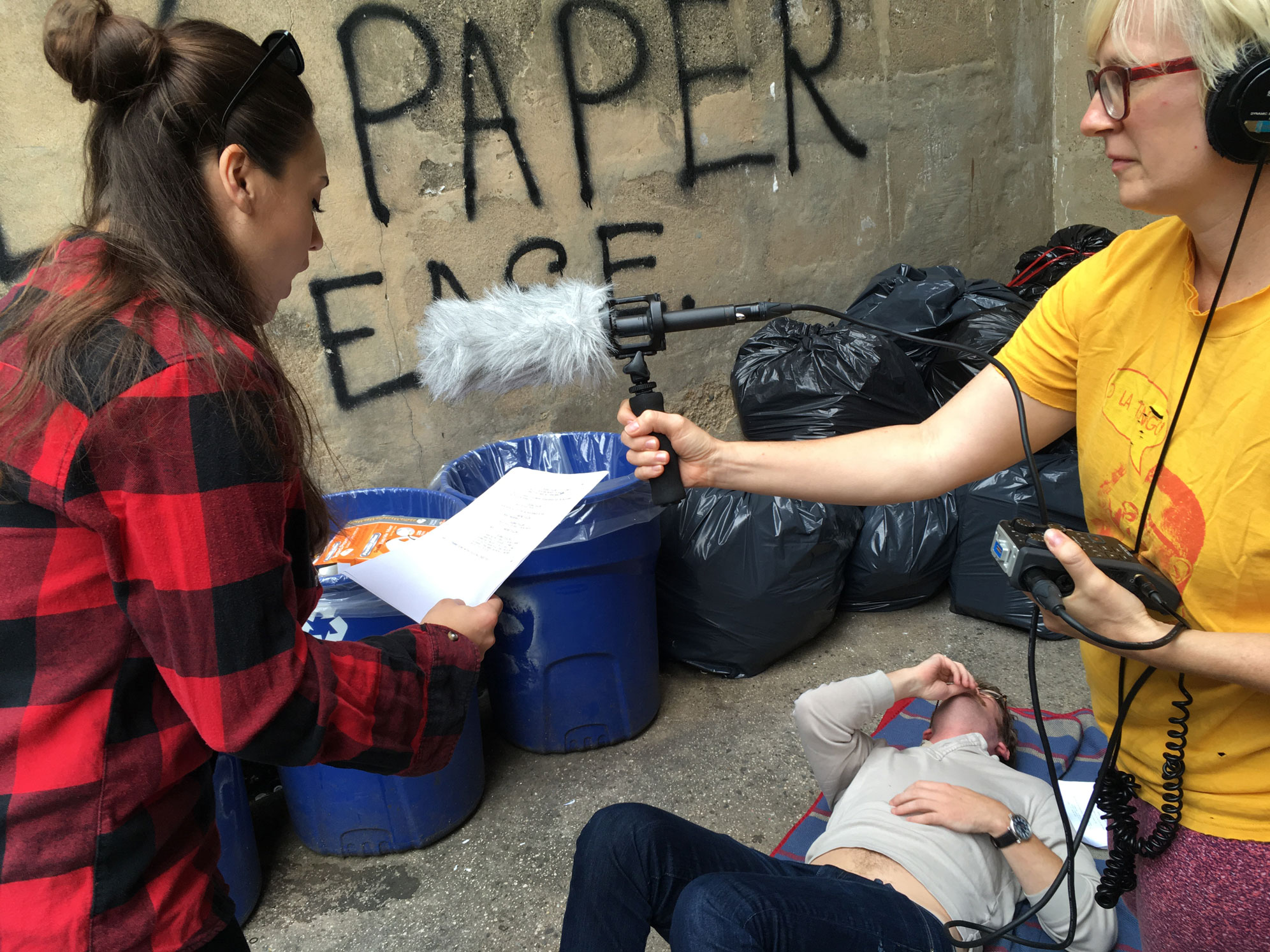 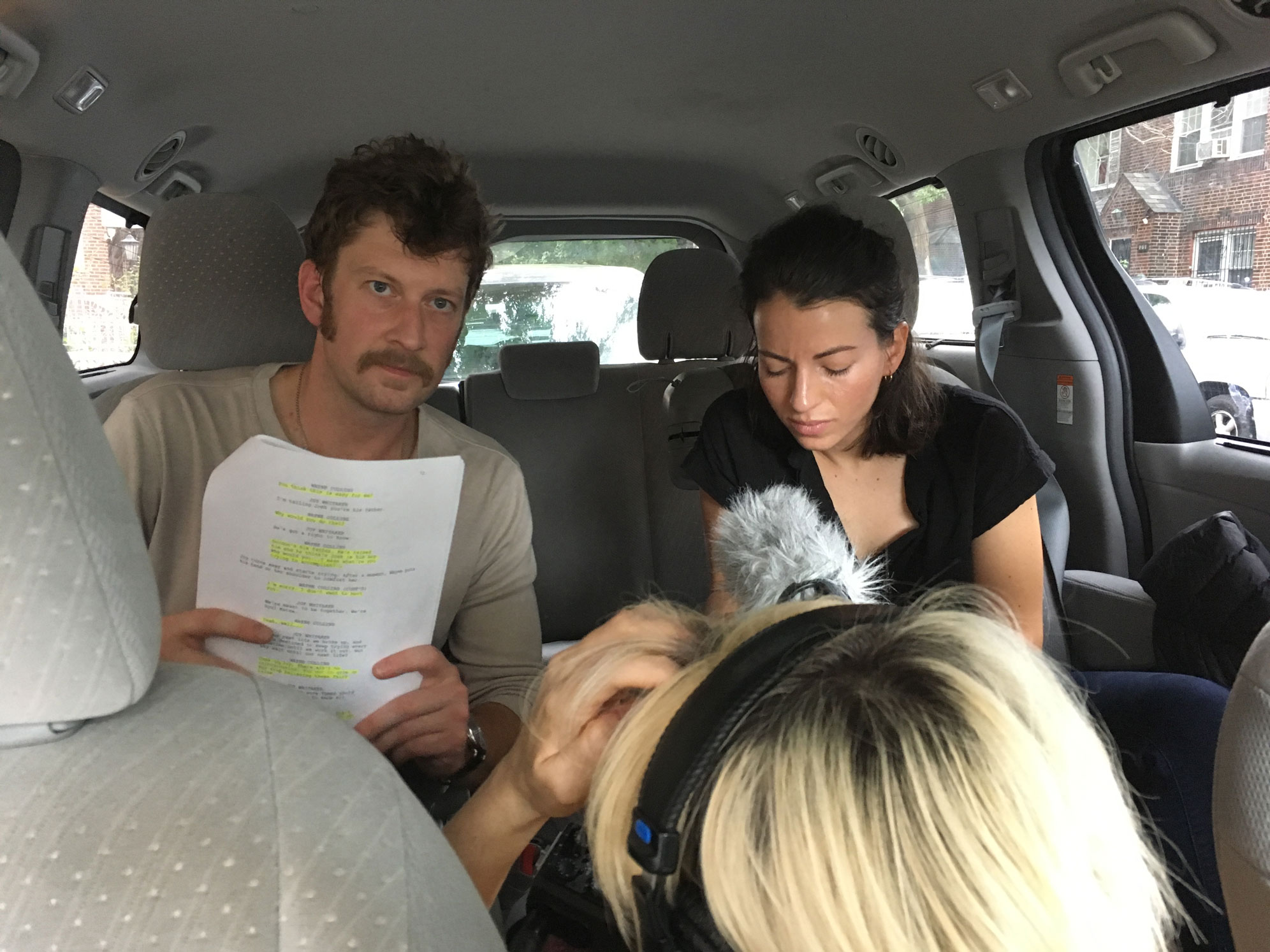 “The city is synonymous with my childhood,” Cady says of growing up in Flint. “Writing this brought me a little bit of homesickness.” Cady moved from the area before middle school to the state of Arizona. He attended Arizona State University, graduating magna cum laude with a B.A. in Interdisciplinary Arts and Performance. He next received an M.A. in composition from Wesleyan University and then moved to Brooklyn, New York, where he has resided since 2001. Flint will always be a part of his life, however, and the city was the obvious, perfect setting for the story that would become “Buick City 1AM.”

“The basic plot idea came to me while completing another piece I did concerning time travel,” he explains. “I created a piece called ‘I Screwed Up the Future’ about a woman going back to the ‘90s to prevent the calamity of Y2K. When I got the idea for ‘Buick City’, placing it in 1980s Flint was the right answer. Both my parents worked and met at Buick City. When I was a kid, everyone worked there.” Cady’s parents still live in the Flint area and the story recalls not only Jason’s memory of Flint in the ‘80s, but that of his parents, as well. “I got so much feedback from my father and his auto-working friends while writing this. They made sure that I got all of the union and shop lingo absolutely correct,” Cady says with a laugh. He also found a friend who ended up working in HR for General Motors to provide an opposite plot perspective. “He really helped me to fill out the personality of Gordon – the story’s white-collar character.” 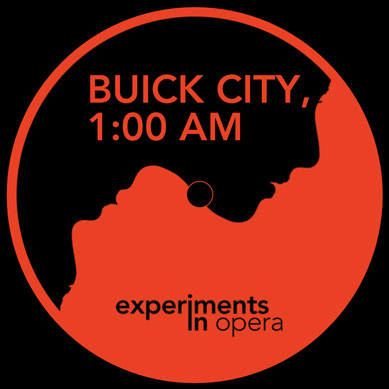 “It’s so much fun to listen to,because you get all of these nice,
little Easter eggs in the music and the dialogue”
Josh Pyne

As soon as Cady began to write, the elements of the story simply fell into place. The four-part story is full of intrigue, subplots and hints as to the identity of Collins’ murderer. It really keeps you guessing, and figuring out the murderer’s identity before it’s revealed is definitely a fun aside. As the story bends and turns, Cady takes listeners in and around the city of Flint in a way that can be gratifying for the current residents. “I wanted to include as many Flint and Michigan landmarks as I could, but not be too heavy-handed with it,” he shares. “Sadly, I had to leave a few things out. For example, my first draft had a Vernors soda reference that I had to omit because it just didn’t fit.” Not only did Cady write the plot and dialogue for the podcast, he also composed all of the music and songs. “I use a modular synthesizer for all of my compositions. I had a lot of fun with it,” he says. Cady did something unique with the music for this composition. A behind-the-scenes secret: he assigned a musical note to each of the seven main characters, and that note drones subtly in the background when that character speaks. Each song relating to a particular character is keyed to that characters note. For example, the main character of Elena Collins is assigned the note of “A” and the main character of Wayne is assigned the note of “E.” (Can you figure out the rest?) Another unique touch: the songs in “Buick City, 1AM” are thematically related to the characters and create as much a mystery as the plot. The story leaves you guessing after each character interaction. 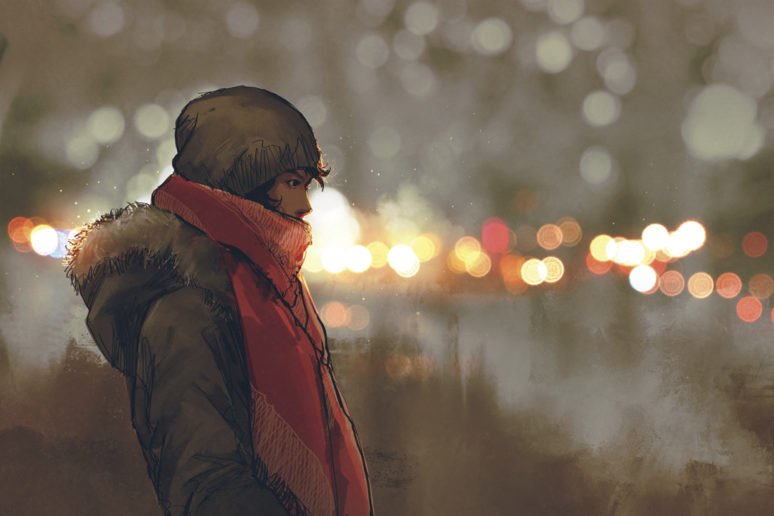 Voicing the character of Wayne Collins is actor, Josh Pyne, who says he loves all the subtle touches in “Buick City, 1AM,” especially the local Flint flair. “It’s so much fun to listen to, because you get all of these nice, little ‘Easter eggs’ in the music and the dialogue,” he shares. The Owosso native grew up in and around Flint. “My mother worked for Flushing schools and I spent a lot of time with her in the city at places like The Torch,” Pyne adds. “Working on this project was a perfect fit for me.” He started acting as early as seventh grade working with the Owosso Community Players, and went on to study at Western Michigan University. Upon graduation, he moved to Brooklyn, New York. He had never met Cady, until he happened upon a backstage listing for voice actors who could speak with a mid-western dialect. Pyne was a shoe-in for the role. “It was kind of the most inside-trader thing I’ve ever done,” he says, laughing. “Most people don’t understand how nuanced a Michigan dialect is. Many people think it’s Canadian,” he explains. “I had been away from the area for a while, but it didn’t take me long to fall back into it – only about a day.” Pyne’s portrayal of Wayne Collins is based upon a faceless Mid-Michigan man. “Wayne is the everyman of his time for the area,” he states. “He cares for his family and wonders about the future. The story is kind of built around two trains of thought: those who think GM will be there forever, and those who see signs of the future. In many ways, the story is about the fall of the working man in the Midwest. Setting it in Flint in 1984 during the Reagan administration is absolutely great.”

Pyne enjoyed recording his part, particularly the scenes with dialogue between Wayne and his friend, Bud, in their store. “I had such good rapport with the actor playing Bud. We got to have some fun with improvisation,” he claims. The show was recorded “on location” which provided another fun element for Pyne. “We recorded inside cars and at sites outside, to get that kind of realistic background ambience.” 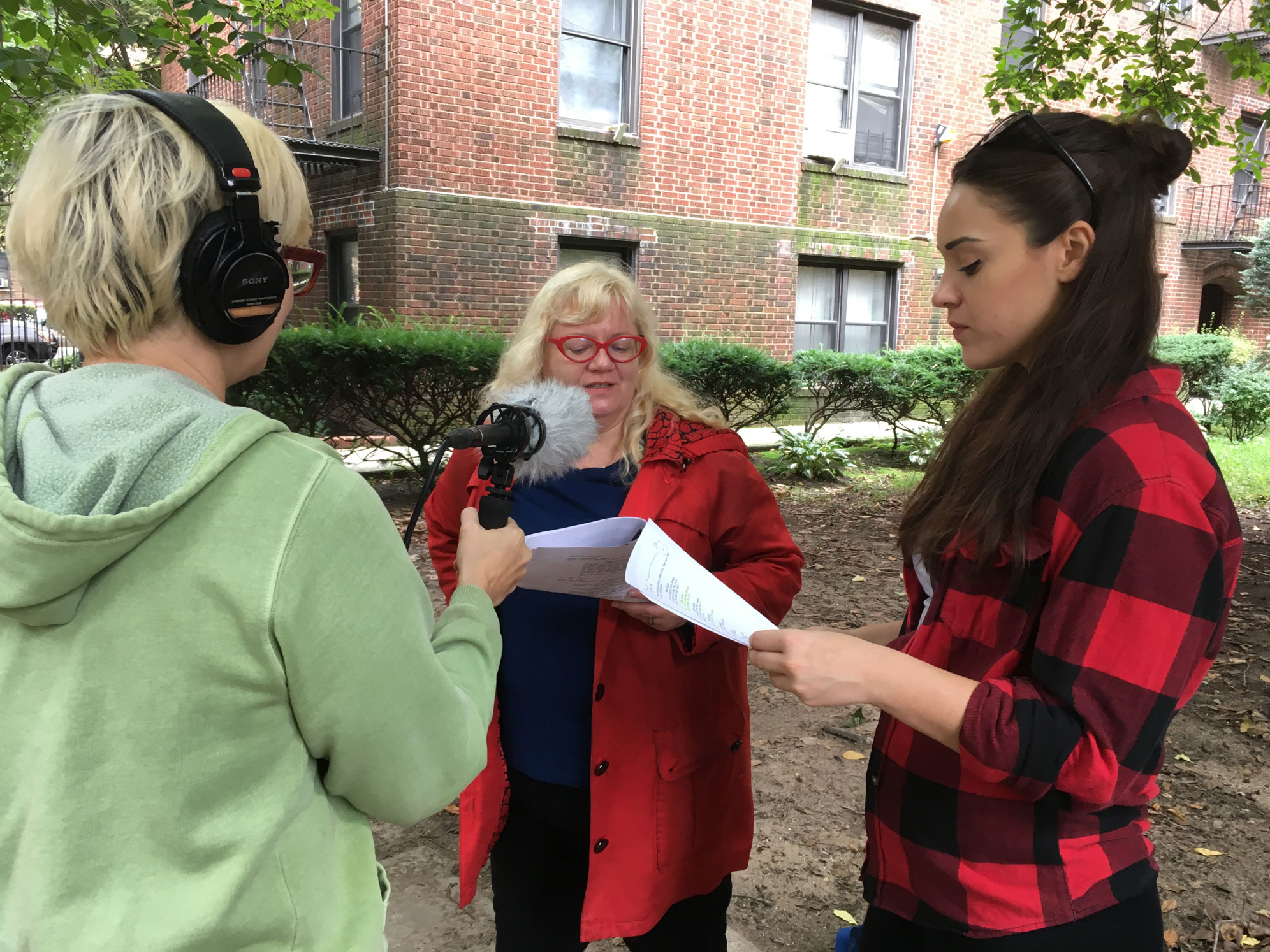 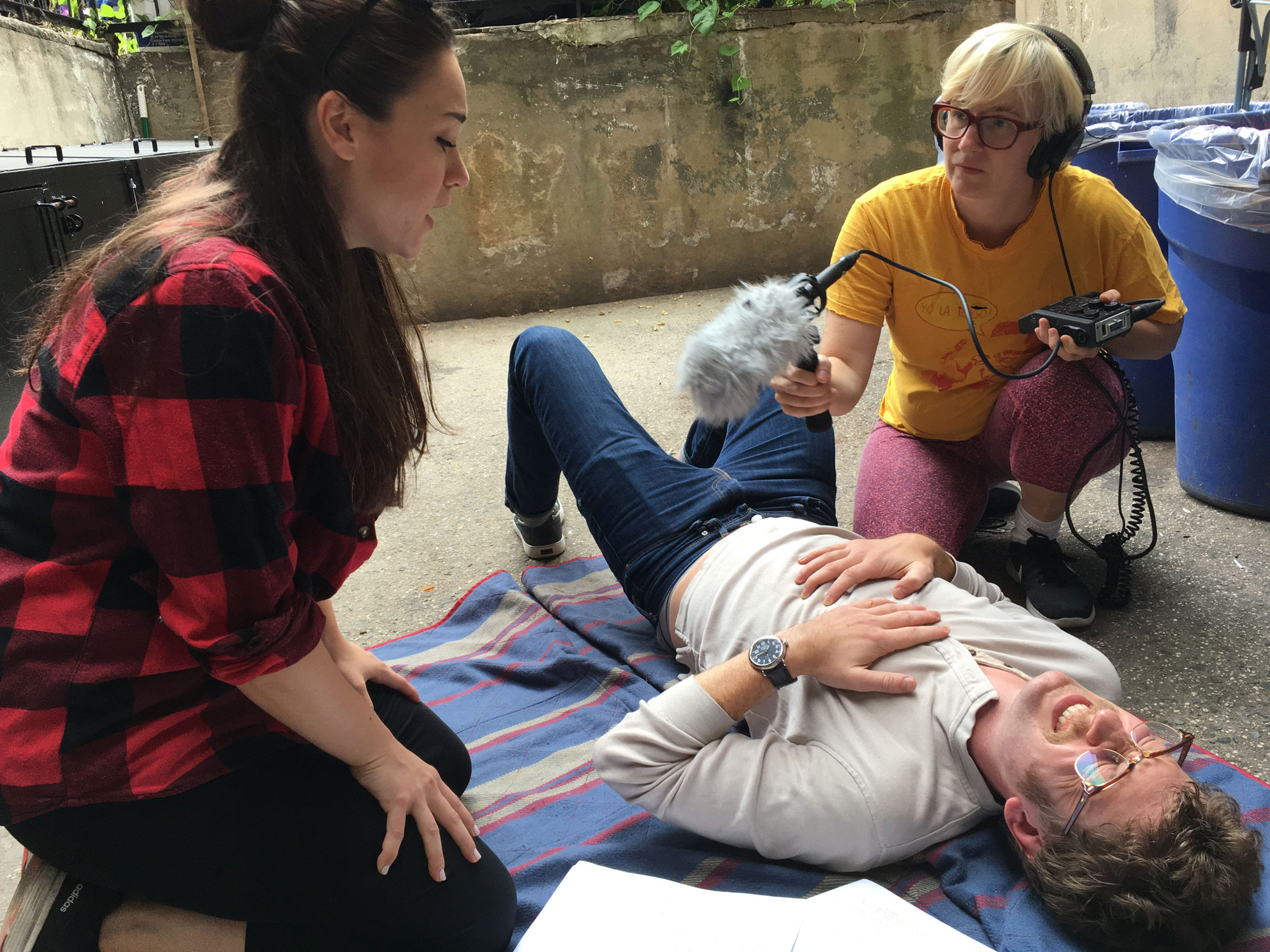 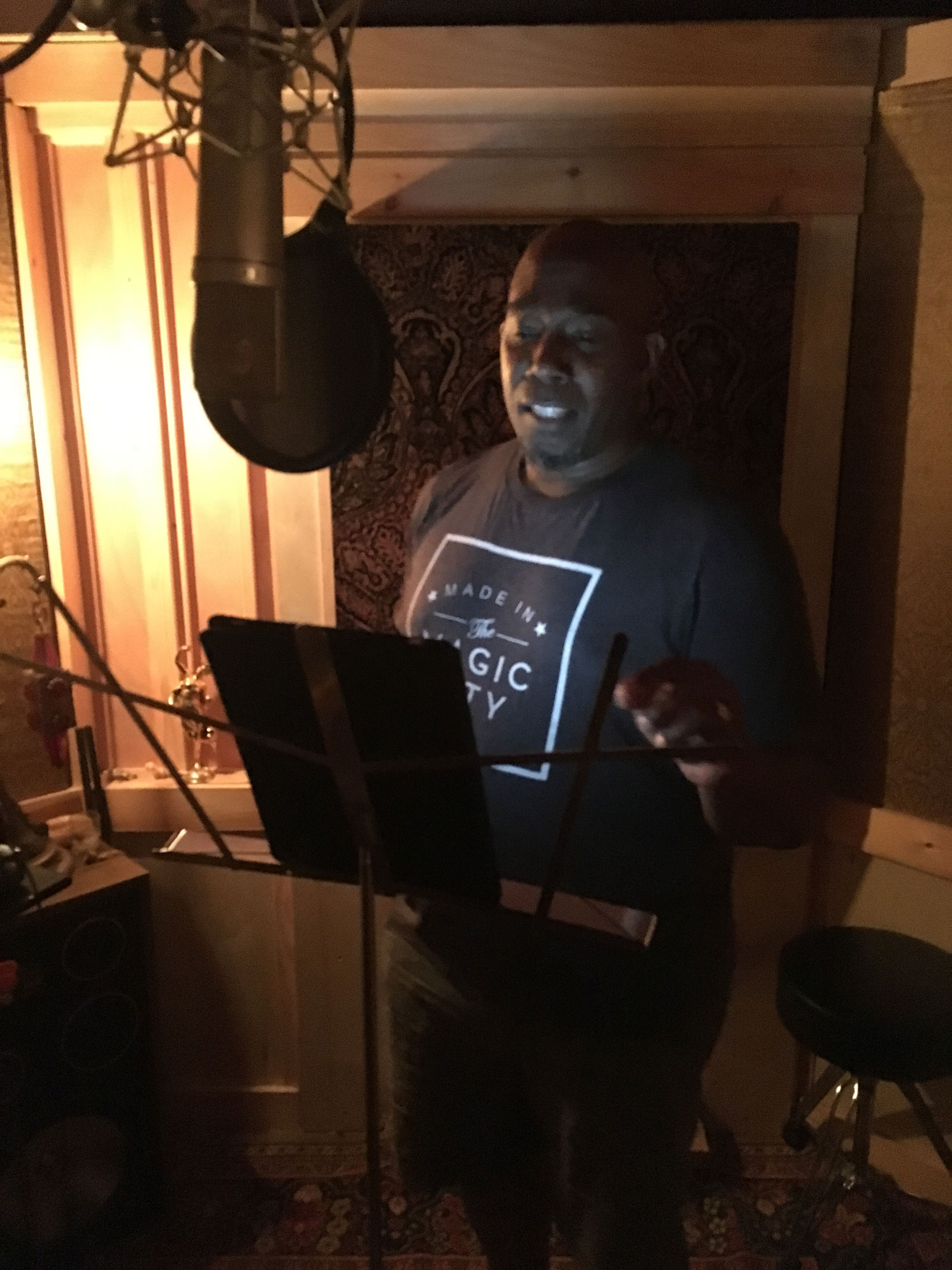 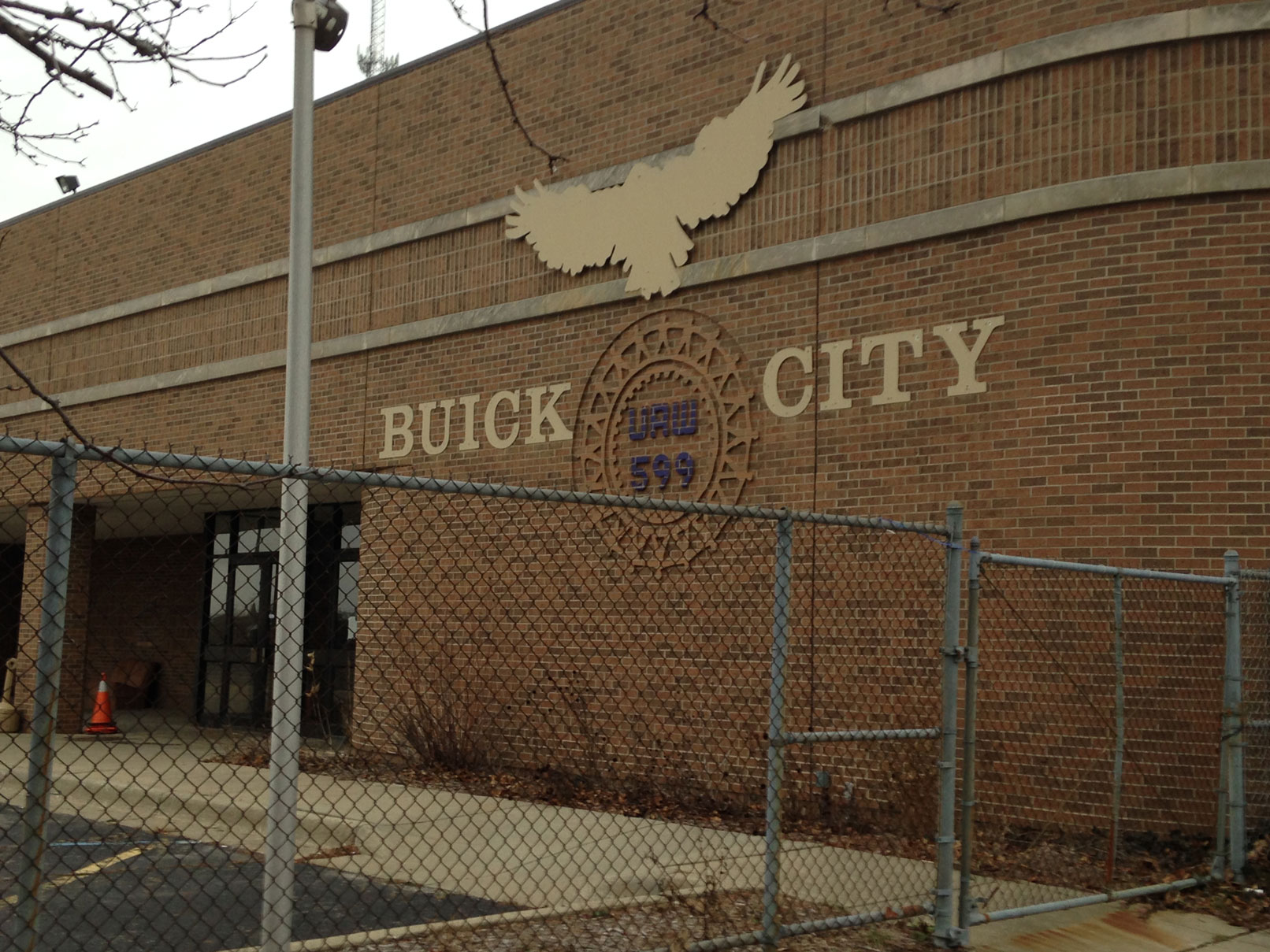 After recording “Buick City 1AM,” Pyne planned to take some time off to travel to Michigan and be with his family for the holidays, before heading back to New York. Currently, he is part of “Live in Theater,” where he performs in live audience-participation murder mysteries, and he loves every minute of it. (See liveintheater.com for more information.)

As for Cady, he will continue working with his production company and is excited about many upcoming projects. “We just performed an opera of mine titled ‘Candy Corn’ as part of our Modularias showcase, and in February of next year, our production company will perform three different operas: ‘Rainbird’, ‘Chunky in Heat’, and ‘Warka Vase’.”

Jason Cady is proud of “Buick City 1AM” and he hopes listeners will be, too. “I wrote the piece to let our listeners know about Flint’s rich history,” he says. “Flint was a place where you could have a solid middle-class life. People outside of Flint have really reduced it down to the water crisis and the city deserves much more than that. The people of Flint are resilient, and their history proves that.” 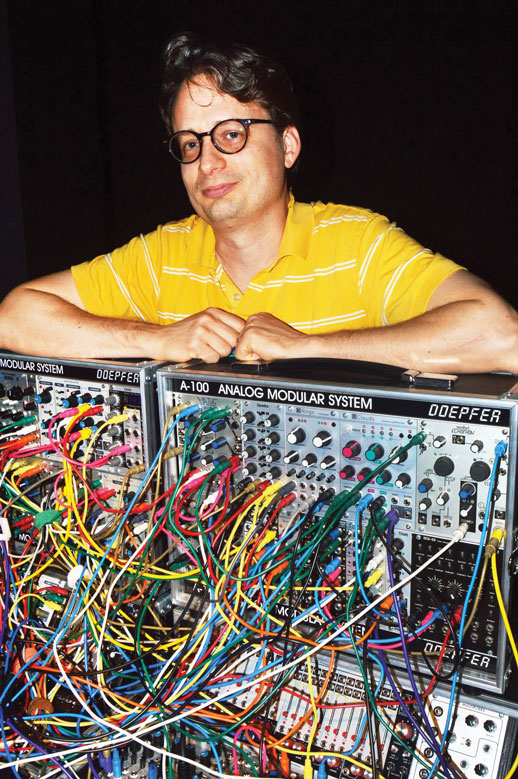 Cady and his modular synthesizer 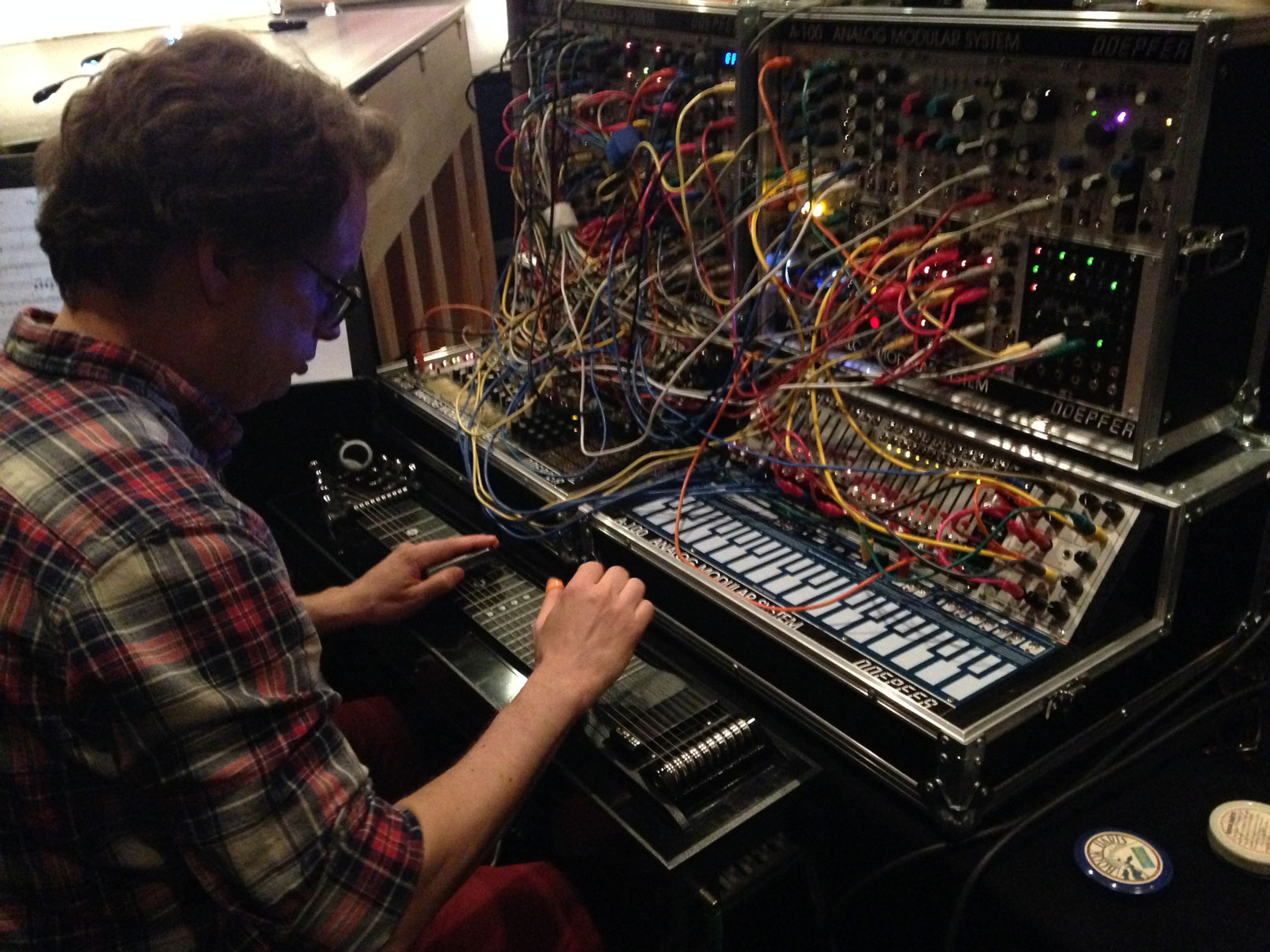 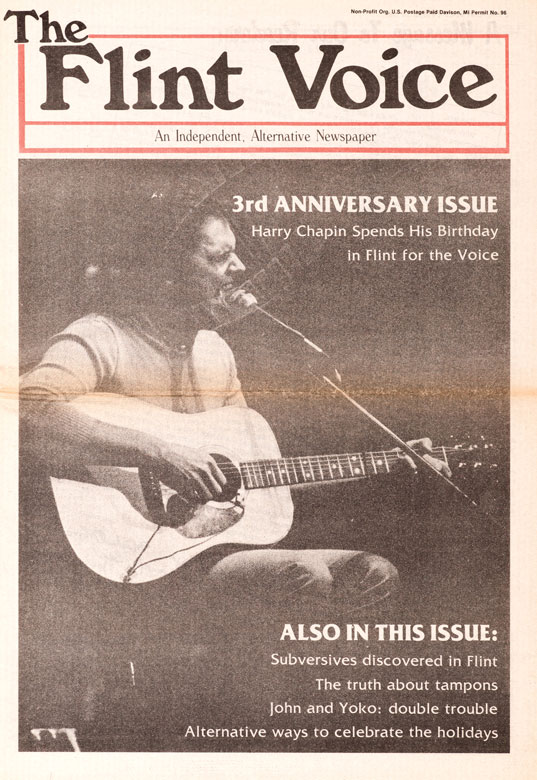 “Buick City 1AM” is available at iTunes, Spotify, and everywhere else you consume your audio online. The podcast is also available for listening at experimentsinopera.com and jasoncadymusic.com.

“Buick City 1AM” is produced by Experiments in Opera (EIO), a company started in New York by Jason Cady and his partners, Aaron Siegel and Matthew Welch. With a focus on re-writing the experience of opera, they create fun and adventurous new operas using intimate storytelling and experimental music. They have produced wonderful performances since 2010, and have no intention of slowing down. For more podcasts and stories produced by EIO and Jason Cady, visit experimentsinopera.com or jasoncadymusic.com. 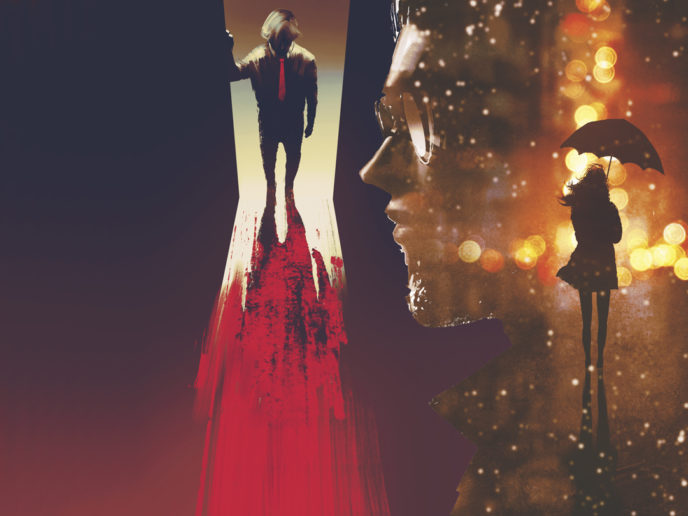