Fresh out of trade school, a young Bryan McCree found himself at Doobies Irish Pub in Downtown Flint on open mic night. His friend, Tony Ennis, pushed him to get on stage and do a little stand-up. “Tony said, ‘You’re funny. Get up there,’” McCree remembers. “I did five minutes off the top and it was exhilarating. That was it for me. I felt I had found my purpose.” McCree was 21 and 40 years later, he still lives on stage making audiences laugh with his odd, physical, Flint-style comedy. He has toured all over the U.S., gone head-to-head with some of the most successful comics of the day, done countless interviews and made appearances on sketch comedy shows such as “MADtv.” Now at the age of 60 (with two shiny, new hips), Flint’s King of Comedy opens up about life in Flint, family and what it takes to make it on the big stage. 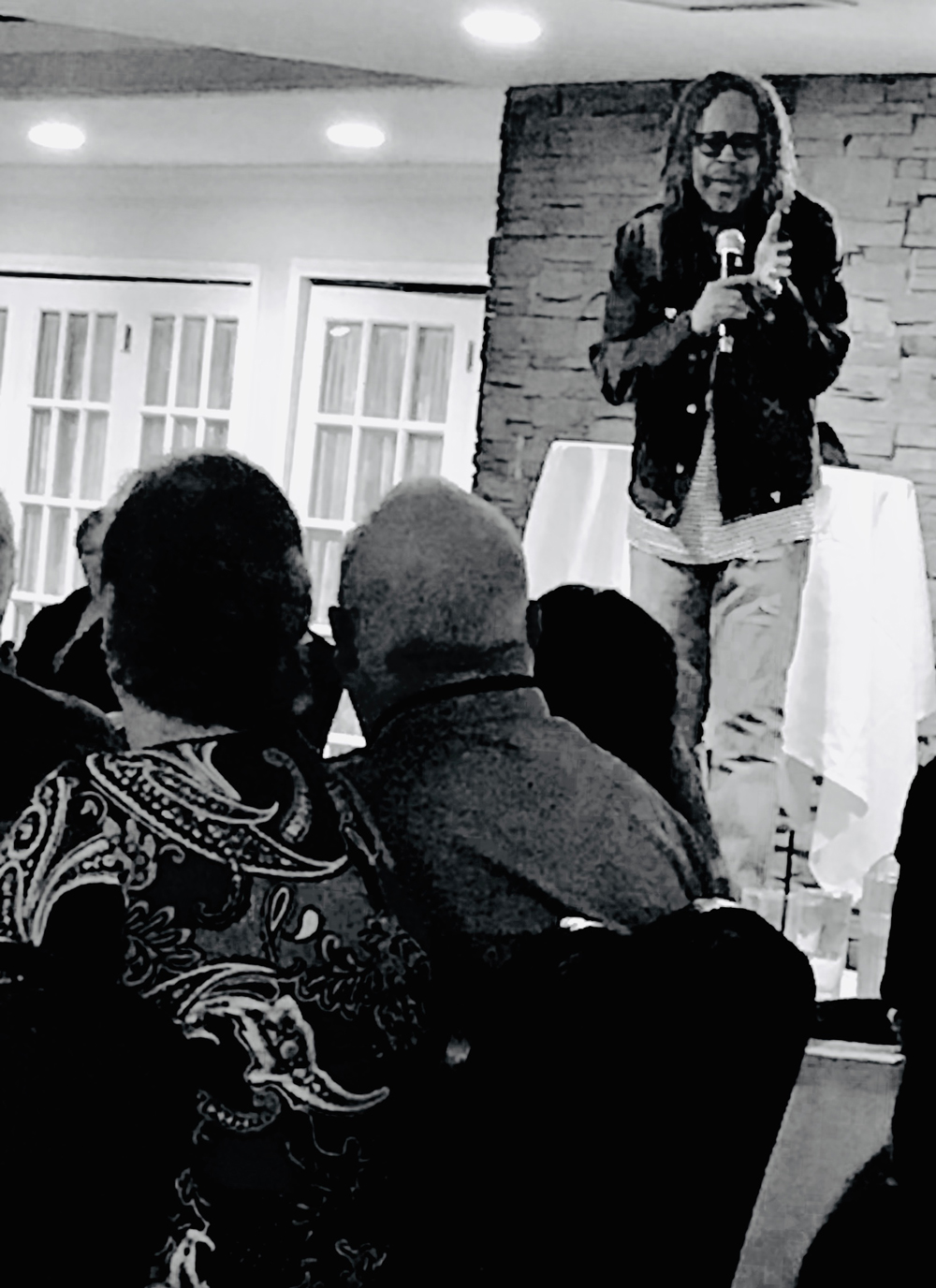 As I dialed McCree’s number from my office phone (socially-distant interview), I wasn’t sure what to expect. The man is a legend on the comedy circuit, known for his fluid improvisation and oftentimes blunt delivery. As he answered, the first thing I heard was laughter. “Hello!” he chuckled. “Don’t mind me – I’ve just sat down to dinner.” I told him that I’d just popped in a breath mint, so we were even. More laughter. It was the laughter of a man who looks at life a bit sideways. McCree can see the humor in almost any situation, and it is on this gift that he has built his career. He couldn’t turn it off if he tried, not that he would want to. It’s who he is and always has been since as far back as he can recall.

McCree was born and raised in Flint in a time when the city was still in its heyday. His uncle, Floyd McCree, was the city’s first black mayor. His father was a gifted jazz musician with an unflappable work ethic and his mother a skilled cosmetologist who sculpted his look, both physically and mentally. As a child, there was no question what he wanted to do with his life. “Since I was around two years old, I knew that I wanted to be in entertainment,” he reminisces. “I remember watching Sidney Poitier on the screen and just thought how cool he was. That’s what I wanted to do.” As he got older, McCree found his way to theatre. He was a drama kid, but comedy was hanging out at the edges and slowly became his calling card. His talent grew from the seeds of family and, as it turns out, necessity. 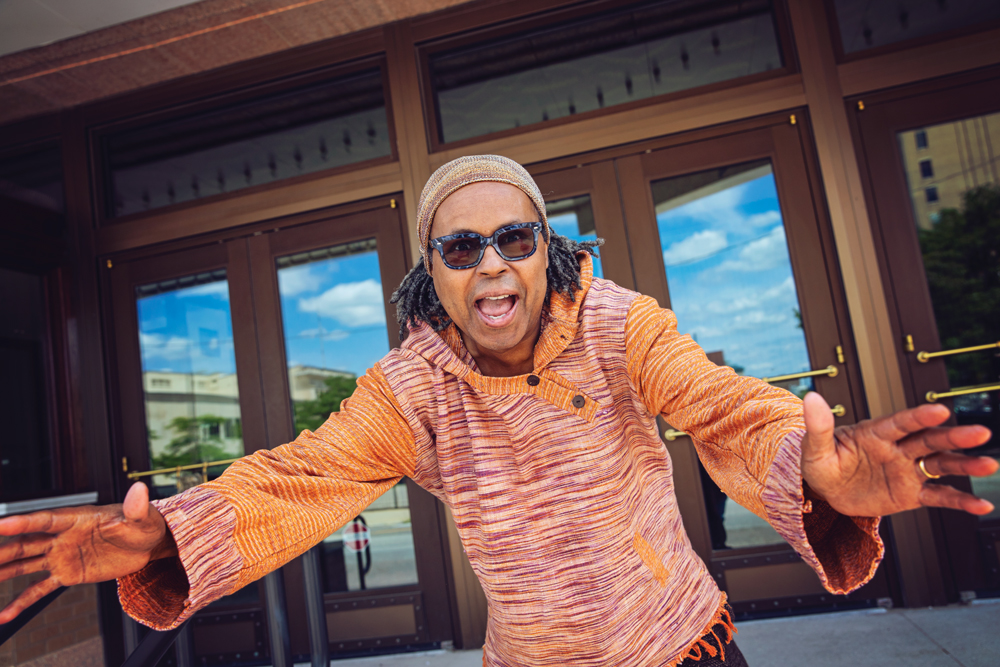 “My grandfather and uncle were real wild cards. My father was quietly funny. His humor would sneak up on you – ninja humor,” he says. “Really though, humor was my defense mechanism.” Born with sickle cell anemia, he was always much smaller than his two older brothers and the other kids at school. “I used humor to keep my brothers and everyone else at bay. It was a weapon,” he adds. McCree graduated from Flint Southwestern and immediately entered trade school, earning a certificate in office machine servicing. “My dad had this dream that I would teach him office machine servicing and we would open a shop together,” he laughs. “Can you imagine me sitting in the back room working on some old, gnarly typewriter trying to find the will to keep going in life?”

Once McCree found his calling on stage, he dove in headfirst, taking any job he could find to work on and develop his comedy material and style. “I studied my favorite comedians and paid a lot of attention to what they did best,” he explains. “Bill Cosby, Richard Pryor, Franklin Ajaye were so smooth at it. George Carlin and Bob Newhart used silence and facial work – they taught me how to let the joke marinate a little.” He pulled his material from within his family, experiences and race. He soon found that his style was very different from that of his contemporaries. “Coming up, I stood out from my colleagues who were from larger cities such as Detroit. I’m not sure what it was, but I think it had something to do with being raised here. Flint is a little more diverse and intermingled race-wise than most places in the United States. Flint has different water and culture,” he answers. “Whenever I tell people I’m from Flint, they never believe it. They act like I just said I came from ‘Nam. Like I need cover fire to go get the mail. I just let them know that we actually like Flint. It’s not bad.” 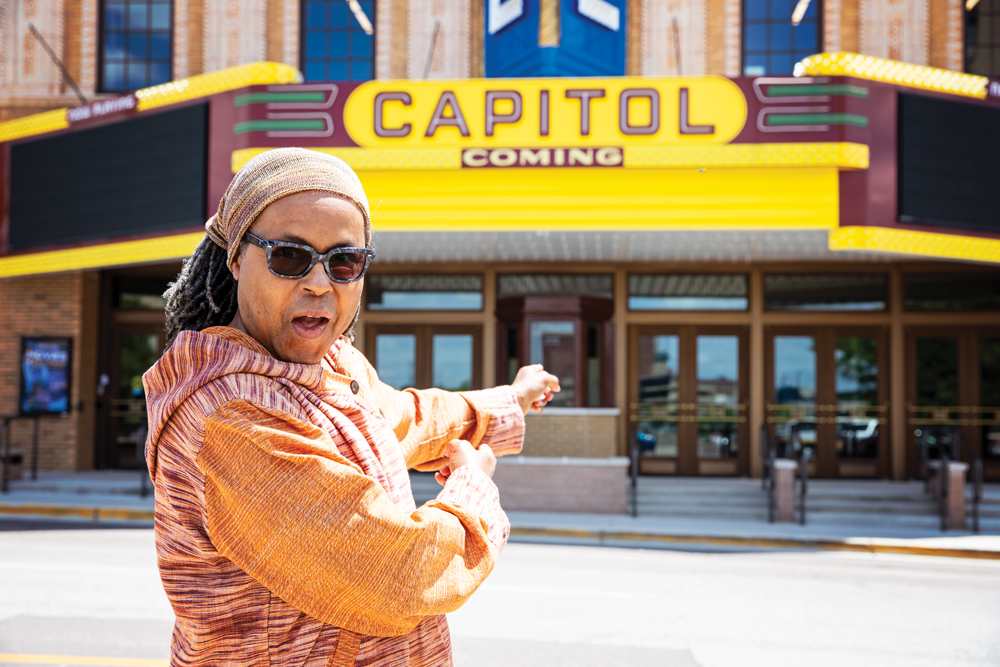 With acquired confidence, McCree headed to Los Angeles where he took workshops, classes and played the California scene. His work in one workshop caught the eye of a producer and he was offered a chance to be a guest on “MADtv.” “I enjoyed the whole experience and I have a newfound respect for the people on shows like that. The script changes constantly and it’s hard to keep up. I’m too old for that now, but I can definitely handle a sitcom,” he hints. McCree returned home from L.A. to notoriety, a higher profile and more demand. “I was away from home for more than 30 weeks a year working the audiences. Nowadays, I’m much more strategic about the jobs I take.” 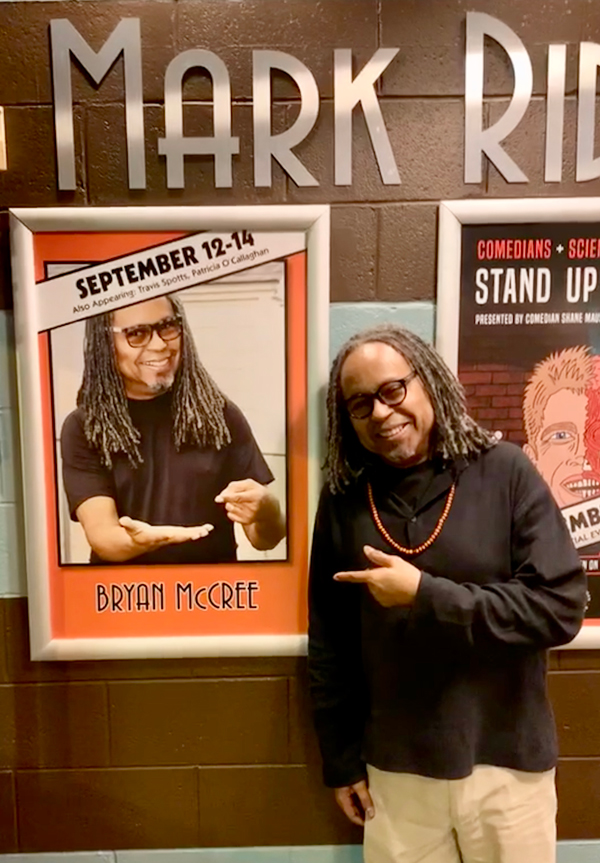 Some of McCree’s material can be described as edgy, often touching on the absurdity of race relations and stereotypes. It’s something he knows a lot about and in an interracial marriage, sees both sides of the coin. His wife Marcia and three children (Jacob Peel, Bryan McCree II and Camille Barclay) have had their share of adventures and never cease to turn a few heads. “Traveling in Mississippi with an interracial family makes for a fun time. Waffle House is not a game,” he laughs. “The server walked us through the entire restaurant like we were a trophy. It was straight out of a movie scene where everybody stops what they are doing and looks. I’m pretty sure I heard a couple of forks drop. The south lives in a different year.” McCree remembers the same thing visiting a Popeye’s Chicken restaurant when an all-black staff came out to have a look at the couple. “How dare we have the audacity to be an interracial family?” he chuckles.

Even on stage, racism can rear its ugly head. “They won’t be racist necessarily to your face, but it has been a hindrance. It’s hard for us to break through,” he explains. “When you think about all the white comedians you know compared to the number of black comedians, it’s crazy. It’s like they only let a handful of us through at one time. There are different rules for us and sometimes different pay and when we complain, suddenly, we are a problem. But I made the decision long ago that I wasn’t going to worry about politics. I worked on being so funny that I couldn’t be denied and I feel I’ve done that. I’ve finally broken through and hit the money round.” 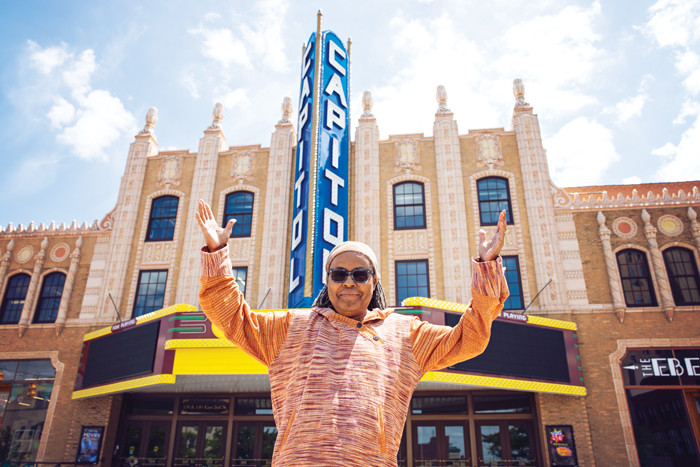 Bryan’s form of comedy is physical, intuitive and engaging. His charm and nervous laughter are infectious and before you know it, he has audiences relaxed and having a good time. It’s something he has worked hard to cultivate throughout the years. Each show is a lesson and each bout of audience laughter earned. 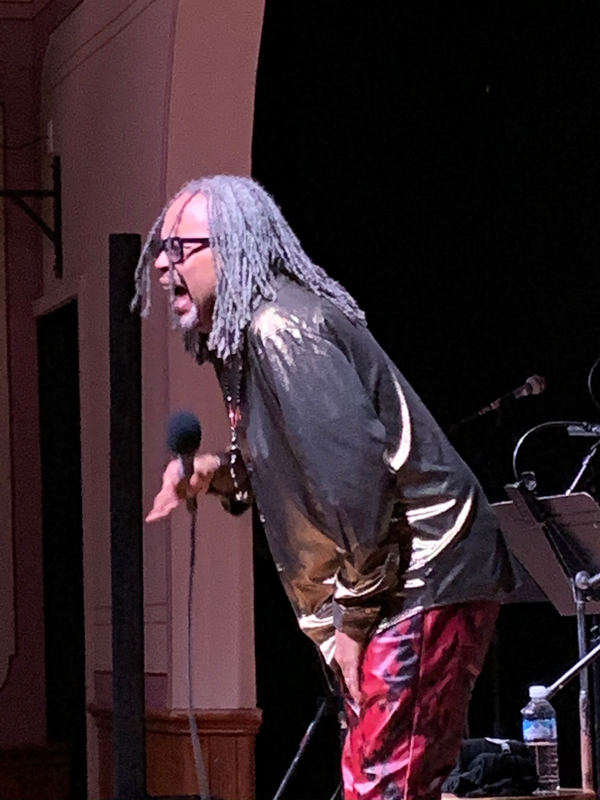 So, what advice does McCree have for those seeking a career in comedy? “Get a real job,” he laughs. “Really, comedy is a calling, not a job. It has to be something you cannot live without doing. There are some things I wish I’d done when I was younger that would have expedited my success. One, I would have moved to L.A. sooner, and two, I would have been a little more humble. There were times when I was too arrogant to take a chance that I should have taken. Take all your chances,” he advises.

His tips for comedy hopefuls: write constantly and record your shows. “It’s important to watch your mechanics. How can I improve the overall experience? Do I need to work on diction and enunciation? Too many times, a comedian’s material is great but the audience can’t understand what they are saying. Saying ‘umm’ is bad mechanics.” He goes on, “It’s scary up there, especially working with new material – but you have to get through it. That’s how you learn. It’s like when you do a hard workout at the gym, you have to get through it to gain. Once you’re past the new material, shift to what works and you’ll be okay.” 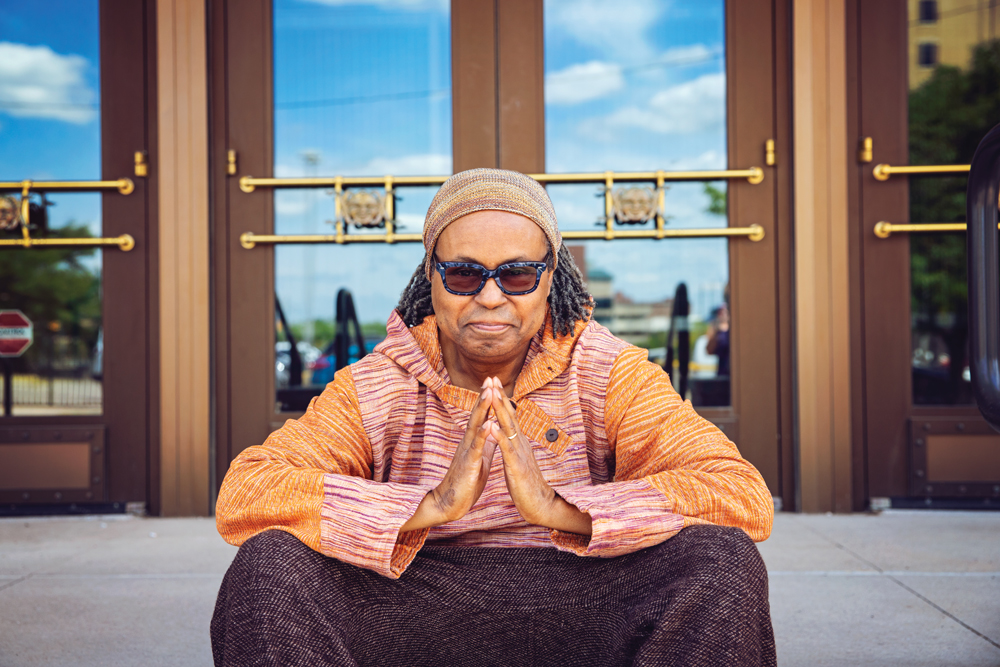 Currently at home working on new stand-up material, sketches and sitcom ideas, he waits for COVID-19 to end and the clubs and theatres to reopen. “I’m a little empty. I’m really missing the scene,” he states. “Right now, I’m just the funniest guy at the hematology clinic – the funniest guy getting treatment this week.” McCree will be ready to make audiences laugh whenever it is safe to do so. He couldn’t live without it. In fact, he was preparing to film a comedy special earlier this year, which has been postponed. He had hoped to film it in his hometown, possibly at the Capitol Theatre. “I’ve dedicated my whole life to comedy and it has taken a lot, but I love it. I’ll continue doing stand-up until I can’t stand up,” he jokes. “Everybody stay tuned for the upcoming Bryan McCree special, coming at you in 2021!”

Photography by Kayce McCLure and Provided.