Peering into the kettle with a practiced eye, Cory Fernelius appraises the mixture of water and grains boiling inside. With hands that once worked his family’s farm, the 29-year-old Fenton resident expertly adds more hops to the concoction. Now near the end of the process, he seeks to transfer the liquid containing sugars and grain mash – known as wort – into a fermentation vessel to cool as quickly as possible. Pitching yeast into the mix is the last step; from here, it’s all about remaining patient during the final phase of brewing his beer…

If Cory Fernelius just wanted a beer, he could go down to the corner store and purchase one. While this would be easier and even more affordable than brewing his own, it’s no longer an option for him since he took up the hobby two years ago. Having honed his skills at creating the perfect brew, the idea of popping the cap off a bottle of commercially-produced beer has become unthinkable. “There’s no describing the feeling of pride you get from taking that first sip of something you’ve made,” Cory said. “That’s how I became hooked.”

When President Jimmy Carter signed bill H.R. 1337 into law in 1978, home brewing became legal in the United States. In recent years, with the rise in popularity of “craft brews,” or beers with unique and diverse flavors and ingredients, home-brewing as a hobby has exploded in popularity. The exciting variety of beers available for creation has increased the number of home-brewers nationally, a population that includes many aficionados right here in Genesee County. 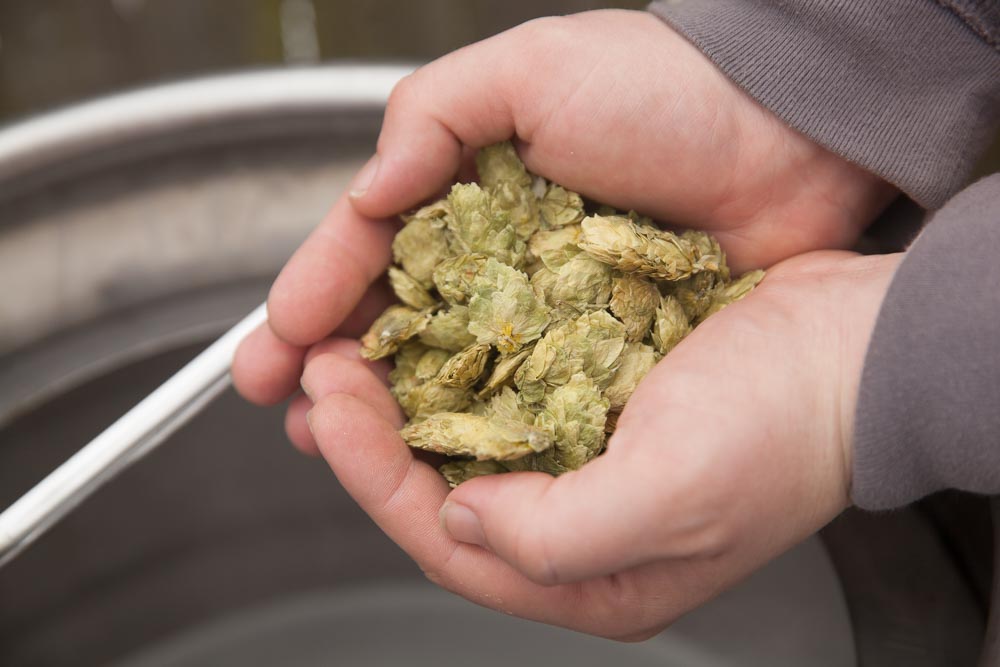 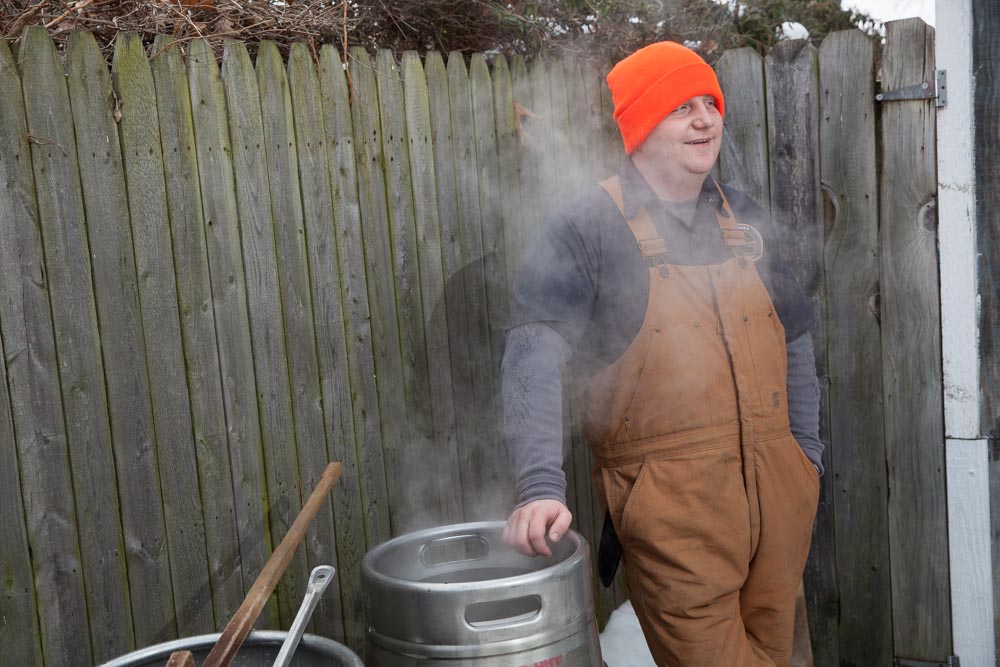 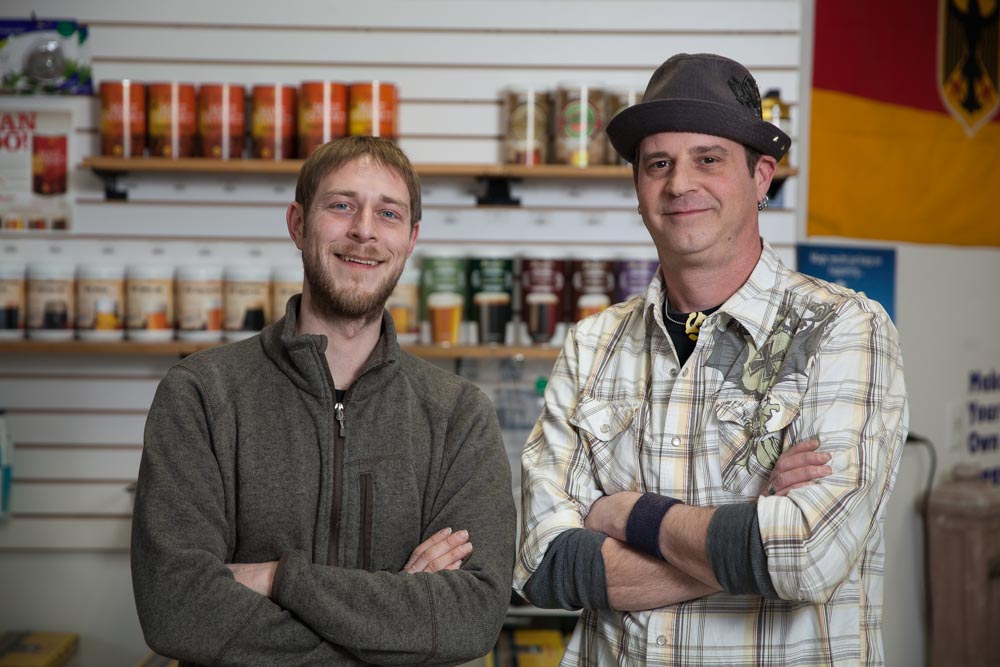 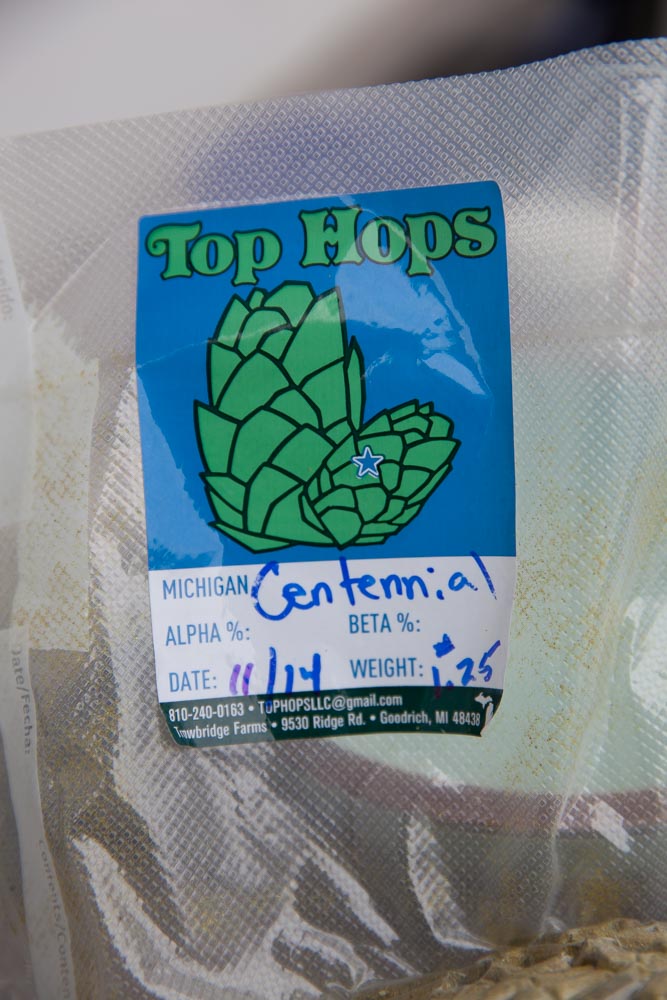 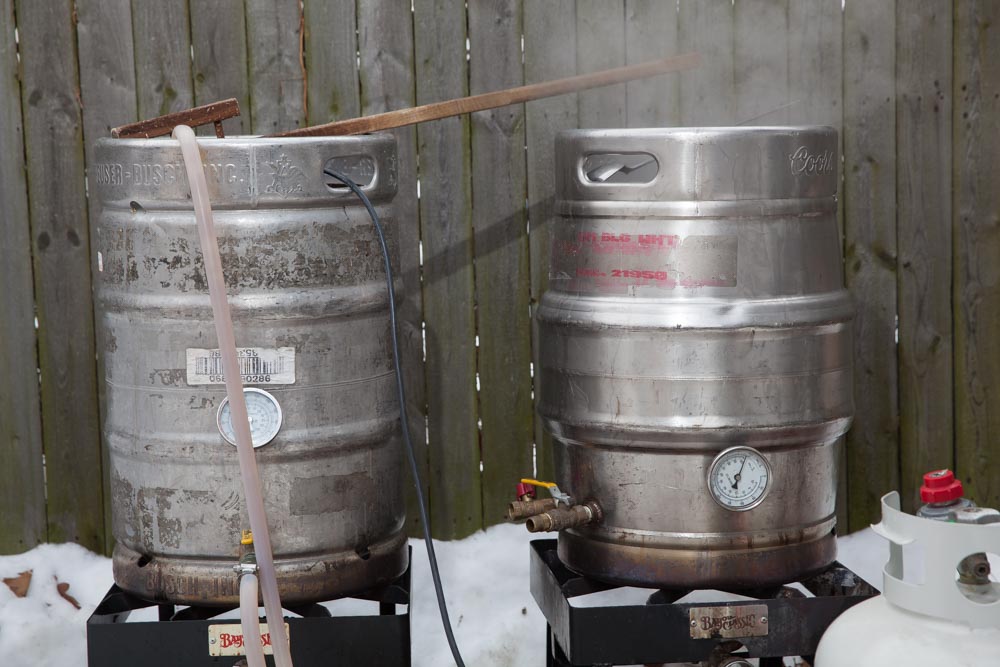 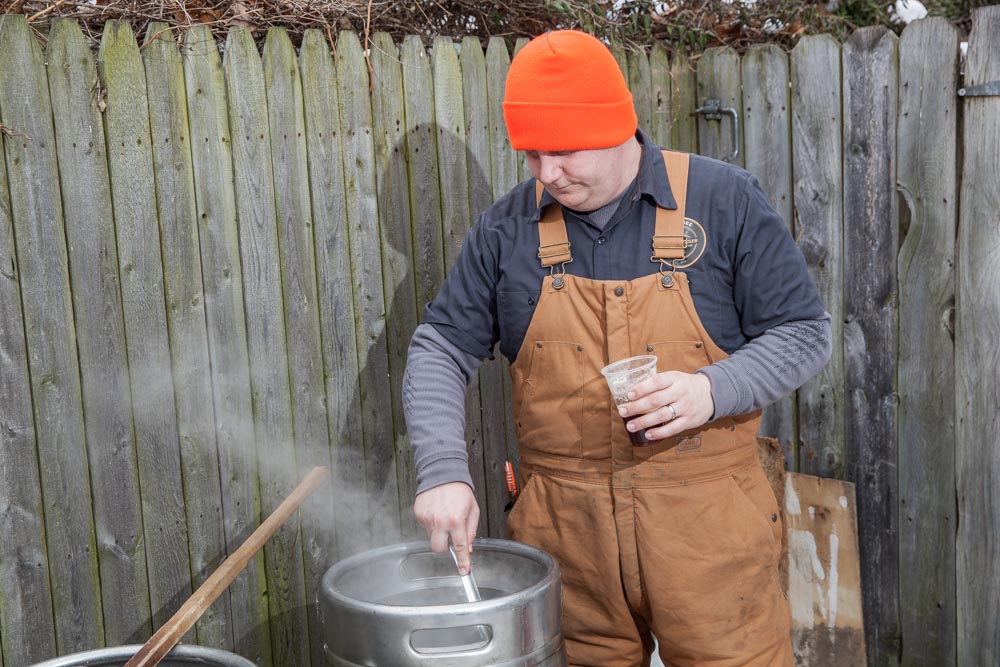 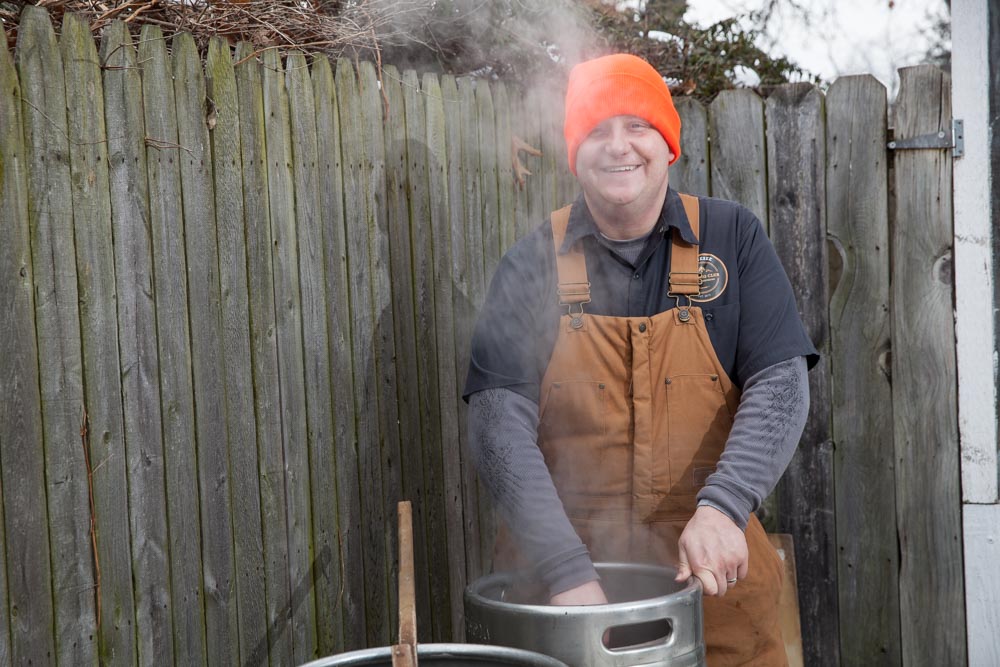 Cory’s enjoyment of craft brews – particularly India Pale Ales or “IPAs” – inspired him to try making his own. He attempted his first batch on February 1, 2013, and it turned out to be a formative experience that Cory will never forget. After purchasing a kit for making an IPA, he quickly set to the task. “I knew that I’d gotten it wrong before I even tasted it,” Cory recalled. “I took too long to put the hops into the mixture, which meant the beer tasted less bitter than I had wanted.”

Undaunted by initial failure, Cory bought another kit and immediately began making his next batch of beer. Today, he averages one to three batches each week, which he shares with fellow members of the Genesee Brewers Club, a local organization he co-founded two years ago. Created to help foster and support the hobby in this area, the group meets on the first Saturday of the month, alternating locations between Fenton Winery and Brewery and Organic Joe’s Grow-N-Brew in Burton.

A typical GBC meeting begins with reviewing club finances and fundraising efforts, says co-founder John Nielsen of Grand Blanc. Members then discuss a particular brewing style, enjoy samples of each other’s creations and take time to dissect the process as a means of sharing tips, tricks and techniques for mastering the art of home-brewing. “There’s no better way to learn than by watching someone brew a batch,” John added.

Knowledge, technique and sanitation are all very important factors when it comes to home-brewing. Said Joe Elder of Flushing, “Just a small amount of bacteria is all it takes to ruin an entire batch. But even though there are some things that every home-brewer needs to learn to make their beer come out right, it’s still a fun and easy hobby to master if someone is truly interested and takes the time to learn.”

Joe was first introduced to the hobby by his older brother, Marcus Elder. After making a few batches, his interest in the hobby skyrocketed when he and Marcus became members of Genesee County Brewers. From there, the “brewing brothers” set up shop in Burton with Organic Joe’s Grow-N-Brew, a home-brew and gardening supply store. Area enthusiasts also find ingredients, equipment and supplies at ACE Hardware in Linden, McKay’s Hardware in Holly, Fenton Winery and Brewery and Oliver T’s in Grand Blanc.

As Cory Fernelius, John Nielsen and Joe Elder continue their adventures in home-brewing, they hope to inspire others to pursue this fascinating and time-honored hobby. The men encourage people to visit the Genesee County Brewers website or even stop by one of the group’s meetings. Said John, “We all want to see each other succeed, and the way to do that is through sharing knowledge so that everyone can expand their horizons.”

Genesee County has a long tradition as an epicenter of handcrafted products. This tradition continues today with its burgeoning art scene, of which the home-brewing movement is definitely a part. While adhering to proper brewing methods relies upon science, the skillful creation of a tasty beverage that balances all of the necessary ingredients into one glass of liquid goodness is also an art form. It’s pleasing to know that many talented “beer artists” call Genesee County their home. ♦

Effective home-brewing is both an art and a science, and it takes time, skill and patience to master it. Here’s an overview of the steps the average home-brewer takes to concoct his or her unique beverage:

• Bring a large pot of water to a boil at 160 degrees Fahrenheit. Add crushed malted barley grain and allow to steep for 20 minutes. The mixture created from this process is known as “wort” (pronounced “wert”).

• Now transfer the mixture into a fermentation vessel as quickly as possible, chilling the liquid to 70 degrees Fahrenheit or less. This allows it to settle, reduces the risk of bacterial contamination and minimizes the time before yeast can be safely added.

• Yeast is added to consume the malt sugar in the mixture, converting it into alcohol and carbon dioxide, giving the beer its flavor. Let sit for two weeks.

• After about 14 days of storage, add more sugar to the mixture. This process is called “priming” and it’s done to give the yeast more food to convert into carbon dioxide.

• Once properly primed, bottle and cap the beer, allowing it to age in cold storage for anywhere from four to seven weeks. If you’ve been patient – and resisted the urge to run down to the corner store for a six pack of commercial beer – you then can pop the top on your latest homemade masterpiece and enjoy it with family and friends.

• Home-brewing is a process that, when done correctly, can produce amazingly tasty results. If all this still seems a bit complicated, don’t despair; the experts at Genesee Brewers Club will be happy to walk anyone through the process, offering the full benefit of their experience and knowledge at each step along the way. To turn to the area’s experts, visit the group’s website – gcbrewers.com – or drop in on a meeting.