Nic Gatlin, Program Director at Carriage Town Ministries for the past seven years, came aboard to help when his dad, Dr. Dallas Gatlin, took on the role of executive director in 2010. According to Nic, “my parents have always supported CTM. All the while I was growing up, they were donors and we volunteered.” They have created many initiatives and changes through that time, but the latest addition to the ministry comes in the form of sweet, pastry goodness – and valuable job training.

Though he’s a self-professed health nut, Nic Gatlin has always loved donuts. As he brainstormed ideas for a new program that would further the Carriage Town mission by creating a new opportunity to teach job skills while also showing appreciation to local first responders, the idea for Blueline Donuts began to rise. This program that he developed from scratch also makes the freshest donuts from scratch – using as many local, high-quality ingredients as possible with hopes of eventually developing some of the healthiest donuts around. 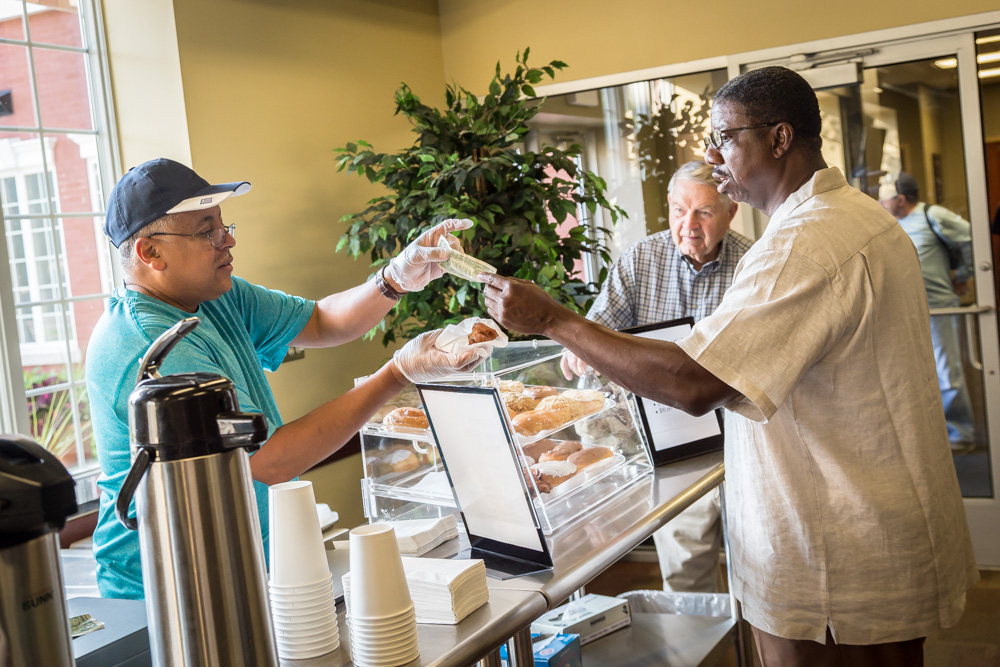 But making great donuts is only one of the goals. “The idea is really centered around having a teaching kitchen,” Gatlin explains. He and Carriage Town resident Bruce Sowles, Lead Baker, work with a rotating group of three people in the facility’s kitchen. “It’s always been a teachable kitchen, so the residents who get involved are part of our Personal Success Plan (PSP), which is a mentoring program to help people get back on their feet and become self-sufficient,” he continues. Those in the PSP can work in the kitchen to help prepare the three daily meals they serve, and now they have the choice to make donuts, as well. “We teach them things like food safety and we hope to soon become a ServSafe teaching program,” Gatlin says. “Then, we can present the material so that they not only walk away with cooking or baking skills, but also a certification that most kitchens require.”

The name, Blueline, is a tribute to the police flag. Gatlin explains, “we wanted a way to show appreciation to local law enforcement and emergency responders who we rely on so much as part of the community. We also wanted to encourage their presence in the area and on the campus.” Gatlin invites all first responders to CTM on Wednesdays saying, “if you’re a first responder, come in and get a free donut and coffee.” 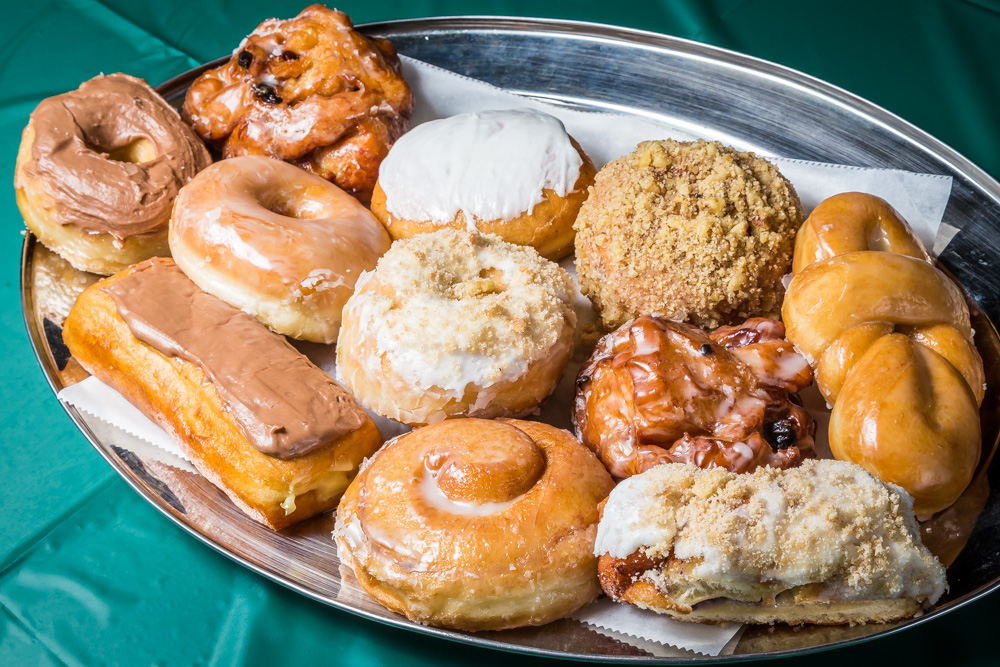 When Blueline began about four months ago, Gatlin had to come up with a donut recipe and a simple cake donut would not do. “We went out and found the most complicated recipe that we could, not purposefully, but that was what happened,” Gatlin smiles. Each Blueline donut begins with a brioche dough made with fresh ingredients. They take all night to make, since the dough must be allowed to rise before the process can continue. “Learning that it’s such a sensitive process has been both challenging and exciting,” Gatlin adds. 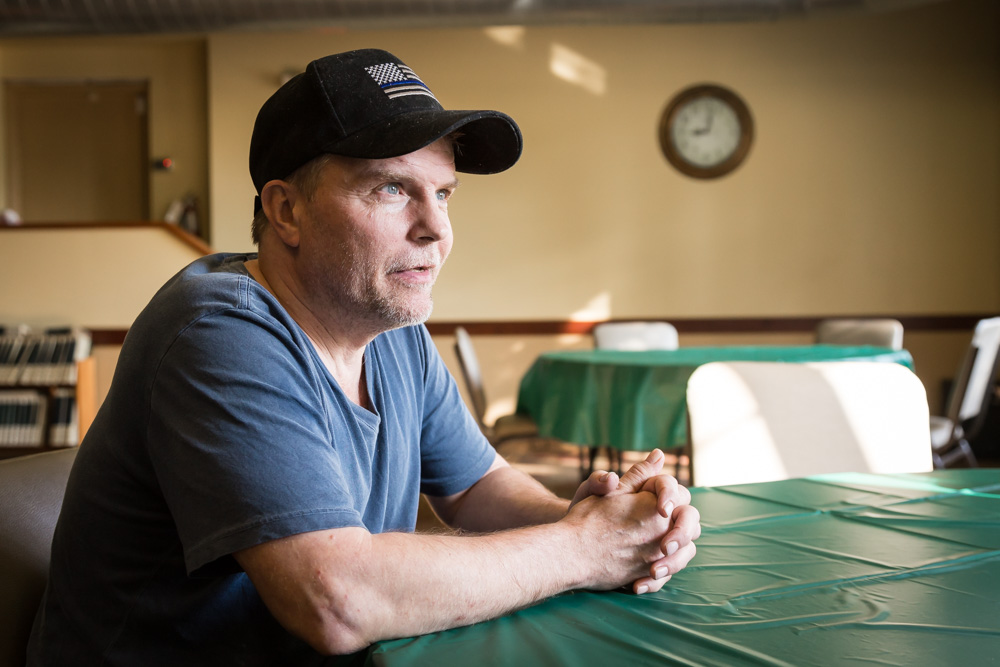 Bruce Sowles entered the project shortly after it began, offering 20 years of experience making donuts at a Davison donut shop. “He has been a huge help,” Gatlin says. Even Bruce says that learning to make the perfect Blueline donut has been a challenge, since some donut shops he worked for used pre-made mixes, which left much more room for error. Bruce says, “at Blueline, it is real ingredients – flour, egg, sugar … and TLC. It’s real sensitive. I’ve learned that I really have to pay attention and be careful about what I’m doing, and that’s exciting! I like to think I was a professional donut-maker, and this has really taught me a lot.” Gatlin seconds that sentiment. “It’s cool knowing that there is so much attention put into these donuts.” 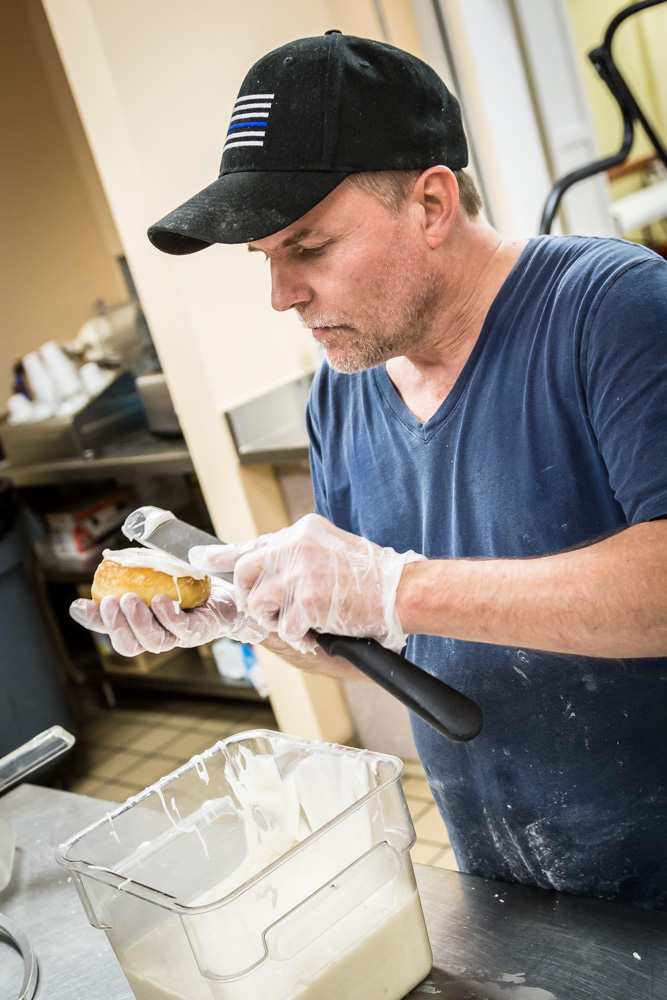 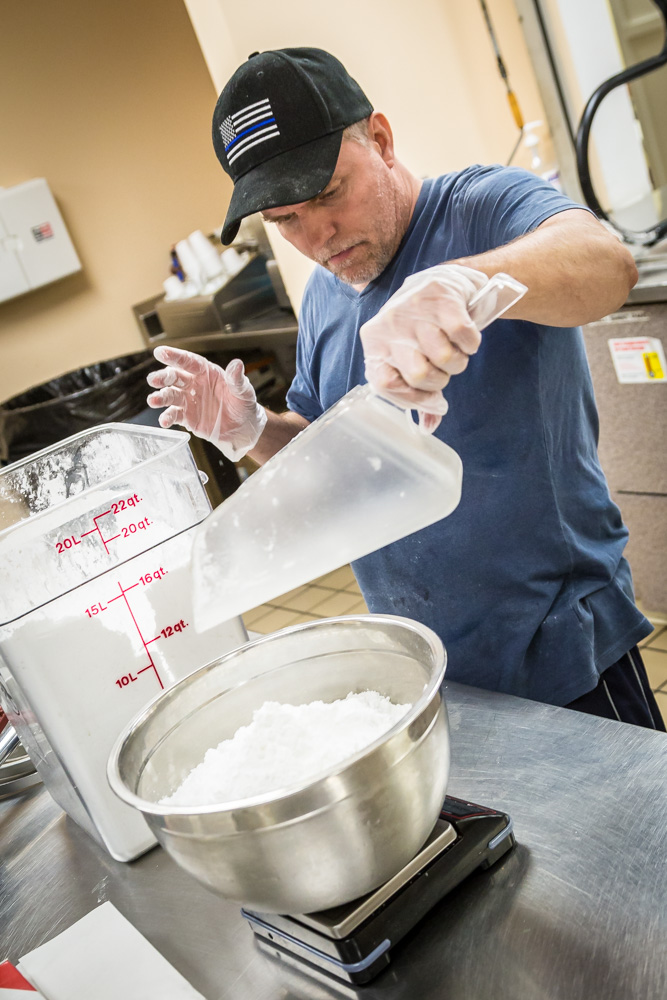 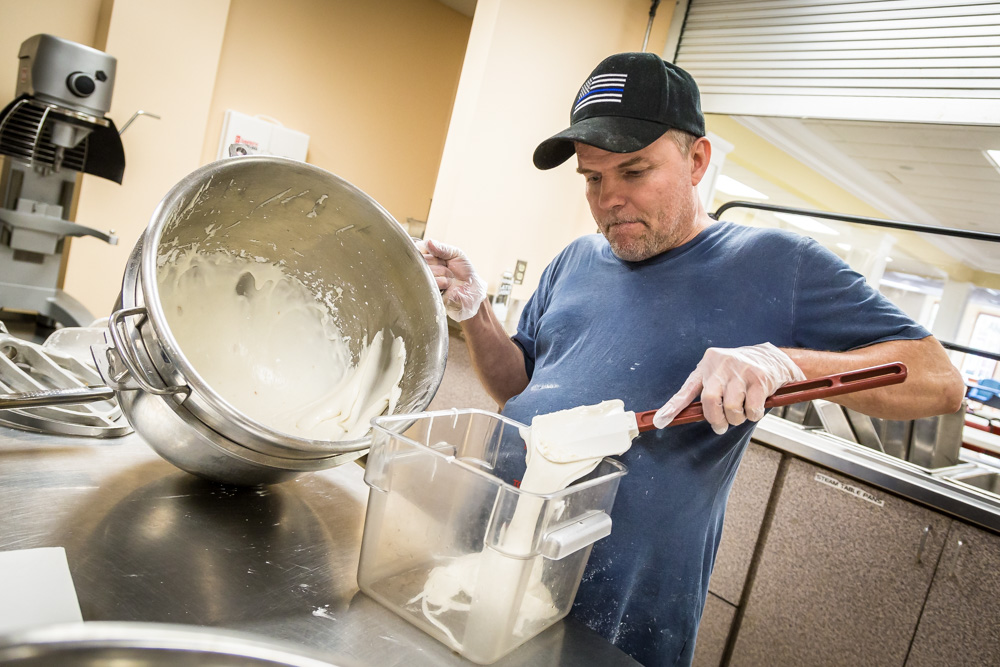 The Blueline team starts making the breakfast treats at 10pm and works through the night until around 5:30am to fill orders. They make small batches of about 20 dozen to serve in-house every Wednesday morning from 7-11am, but Heyday Coffee Roasters gets 3-4 dozen every day to sell in their Flint cafe. “We’re more of an order-based operation,” Gatlin says. They have been approached by other corporations and cafes interested in ordering. He adds, “we’re not looking to make money with it since we are a nonprofit, but we’re looking to fund the program and part of that will be to pay wages for the residents who are involved. That way, it’s not only a teaching kitchen, but also a source of income for them.” Gatlin emphasizes, “our goal is to help the individuals who come through our door to reach self-sufficiency, gain stability and really get back on their feet. Learning a new skill really builds confidence. With the addition of Blueline Donuts, I’ve already seen the men and women who come through and work in the kitchen not only learn a new skill, but develop their confidence to really start attacking life again.” 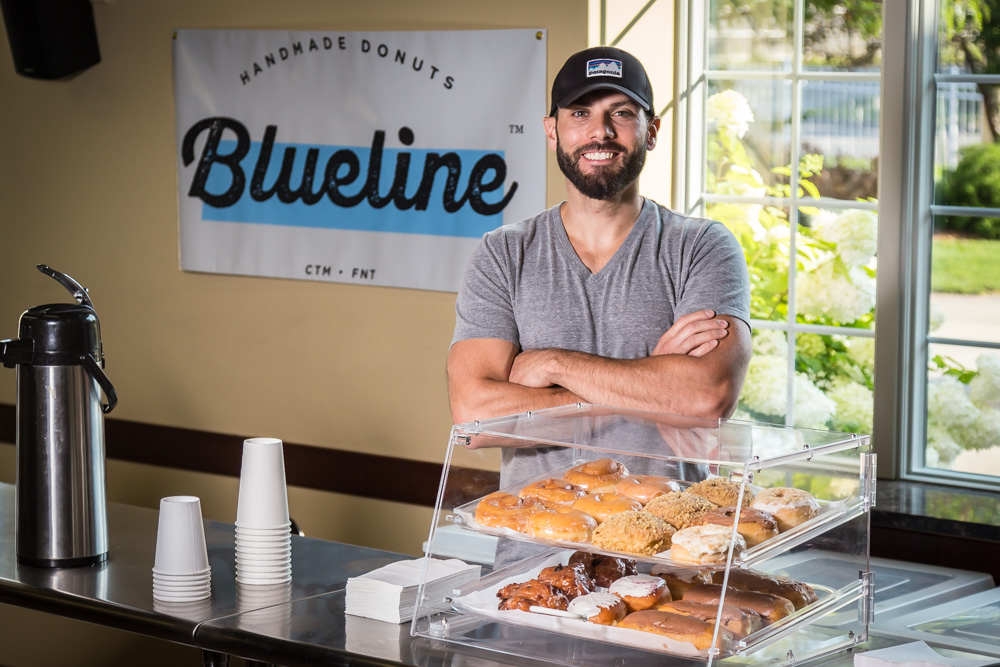 Carriage Town Ministries began in 1950, with the mission to follow Matthew 25 and minister to the hungry, the thirsty, and individuals in need of a place to stay. They are a campus of learning and restoration in Flint’s historic Carriage Town neighborhood. Visitors and residents find a haven of safety and acceptance, learning and responsibility, structure and productivity.

Today, they have 120 beds (the most in the county) for men, women and children in need. Each year, they provide 42,000 nights of rest, distribute 142,000 meals, and provide 110,000 pieces of clothing free of charge. The Lafia Learning Center is open to the community and sees 120 new students each month. For more info on Blueline Donuts or other services CTM offers, visit carriagetown.org.
Photography by Eric Dutro