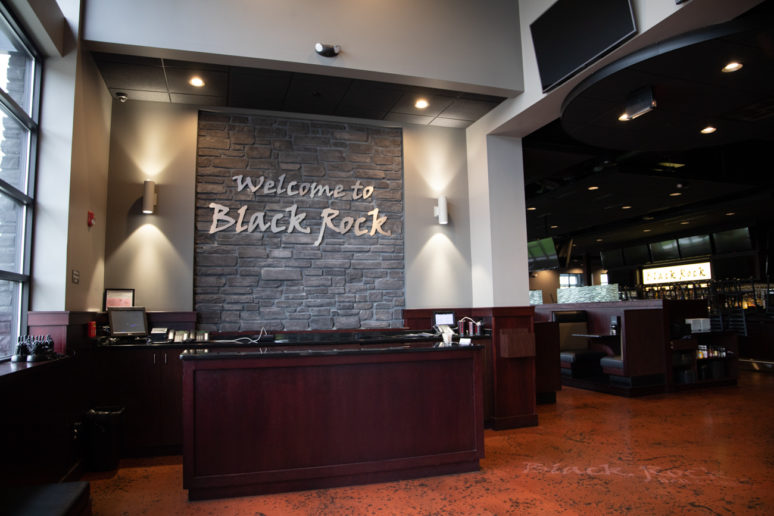 It isn’t every day that you can cook your dinner on a rock – let alone, a black volcanic rock! But that is exactly what you will do when you dine at the Black Rock ™ Bar & Grill in Davison. The popular restaurant celebrates its one-year anniversary this month and has already gained a lot of fans, according to General Manager, Dave Simonovic. “People come here for a great steak and for the ambiance,” he says. “It’s a cool experience.” The main attraction is the 755-degree Australian lava rock on which the meat is cooked, right at your table. “It keeps all the juices in,” the GM explains, “and keeps the food hot the whole time.”

Black Rock’s popularity is evidenced by the eatery’s selection as the winner in three categories of the My City Magazine 2018 City’s Choice Awards: Best Fine Dining Restaurant, Best Ambiance and Best Dessert. And the menu does not disappoint! According to Simonovic, their award-winning signature steaks include sirloin, filet, New York strip and ribeye, all served on the hot stone. The menu also features a variety of seafood, including: seared Ahi tuna, scallops, jumbo shrimp and lobster tails. There are four mouthwateringly delicious, sizzling combination plates: Steak & Rib Combo, Steak & Chicken Habanera, Steak & Lasagna (served in an iron skillet) and Land & Sea (a 5oz. signature sirloin served with blackened white fish).

So, how long do you cook the meat to achieve rare, medium-rare, medium, medium-well or well-done? Your server will tell you, help you cook it, or have it cooked in the kitchen, should you so desire. There are, of course, several delectable side dishes to choose from such as butternut squash puree, wild rice, creamed corn, and asparagus, to name a few. 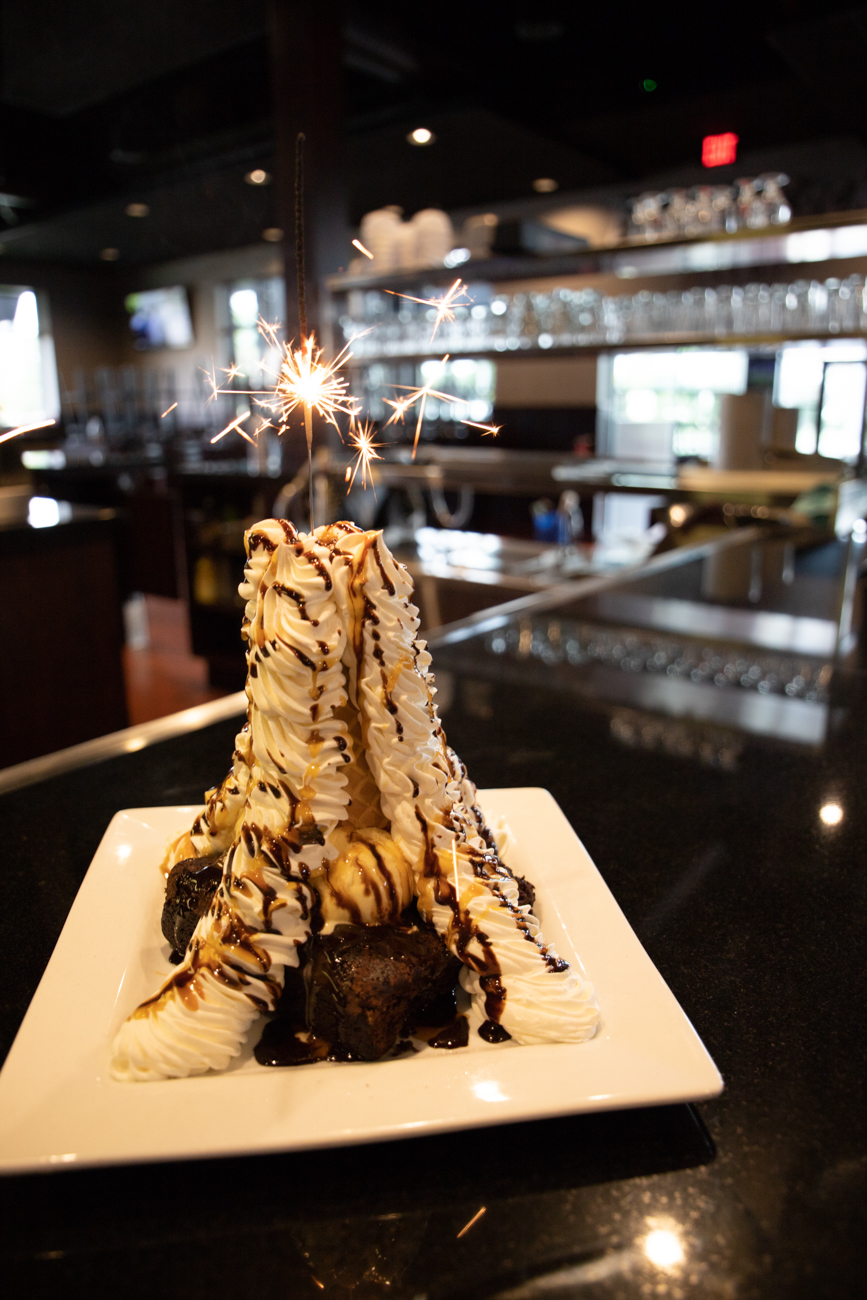 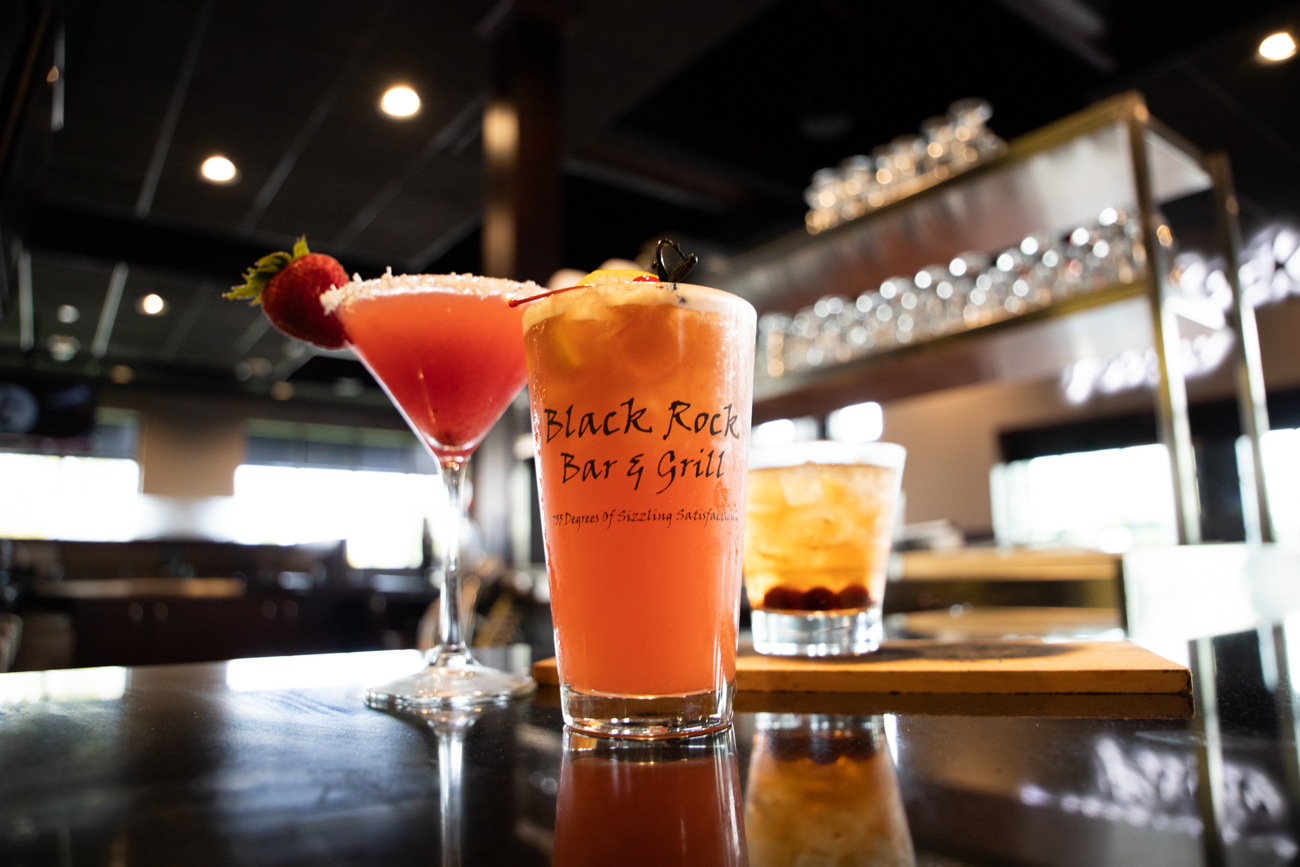 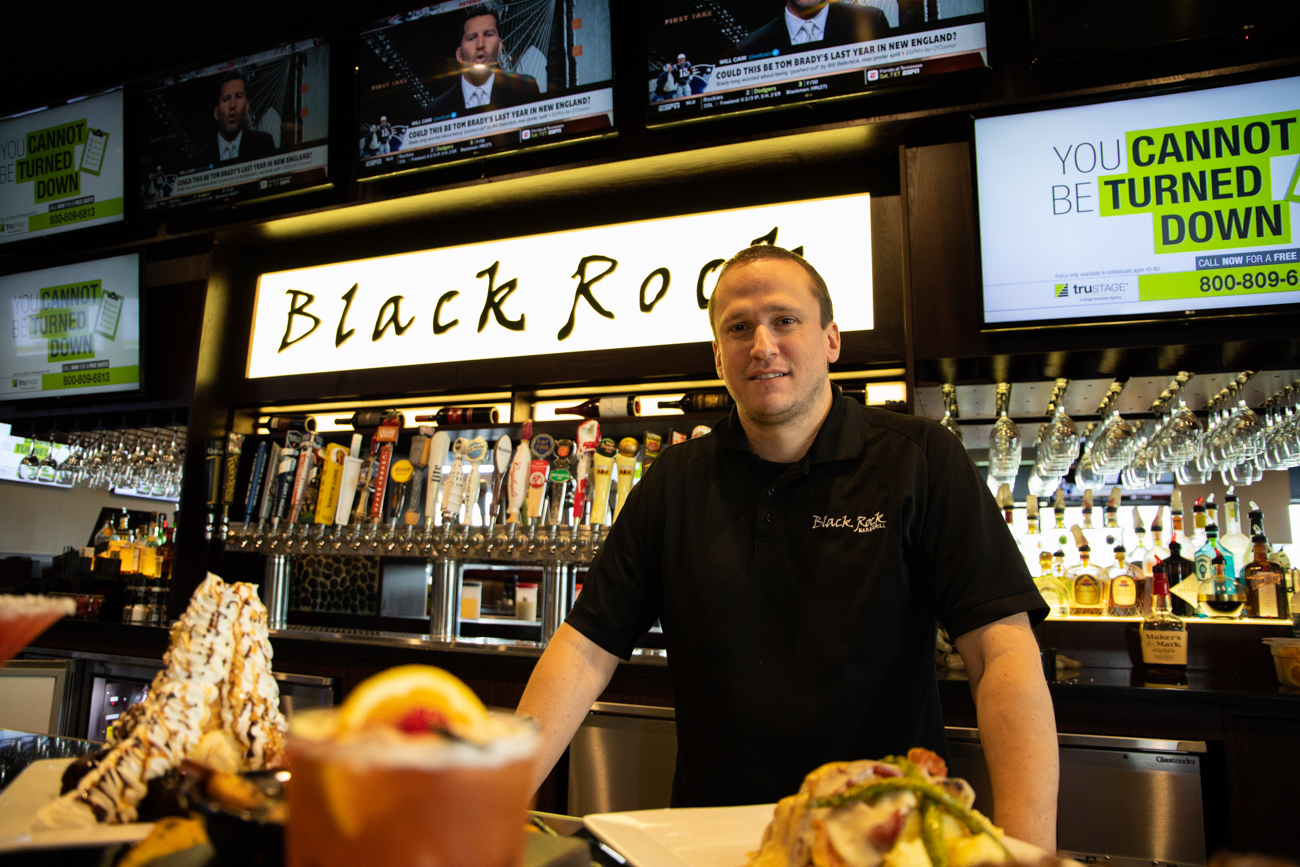 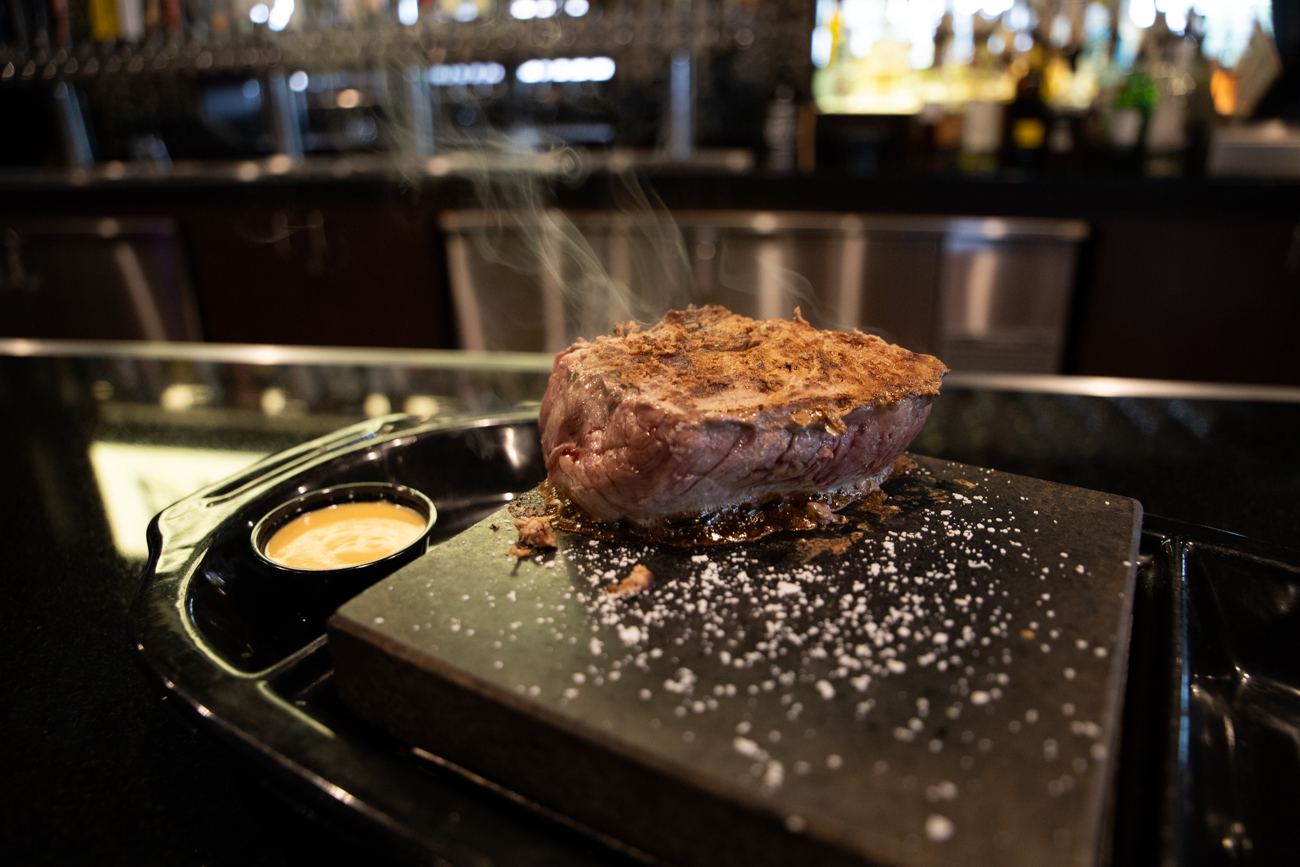 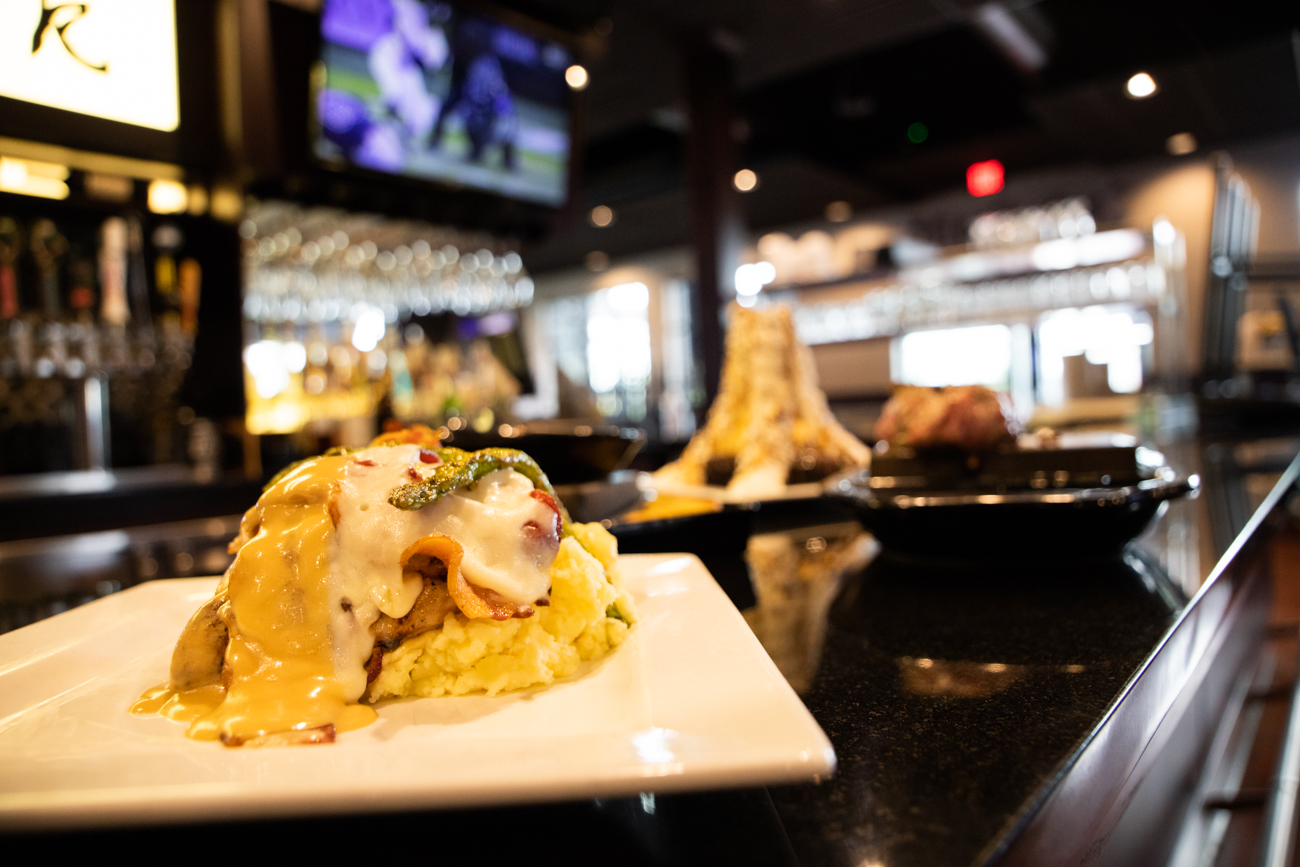 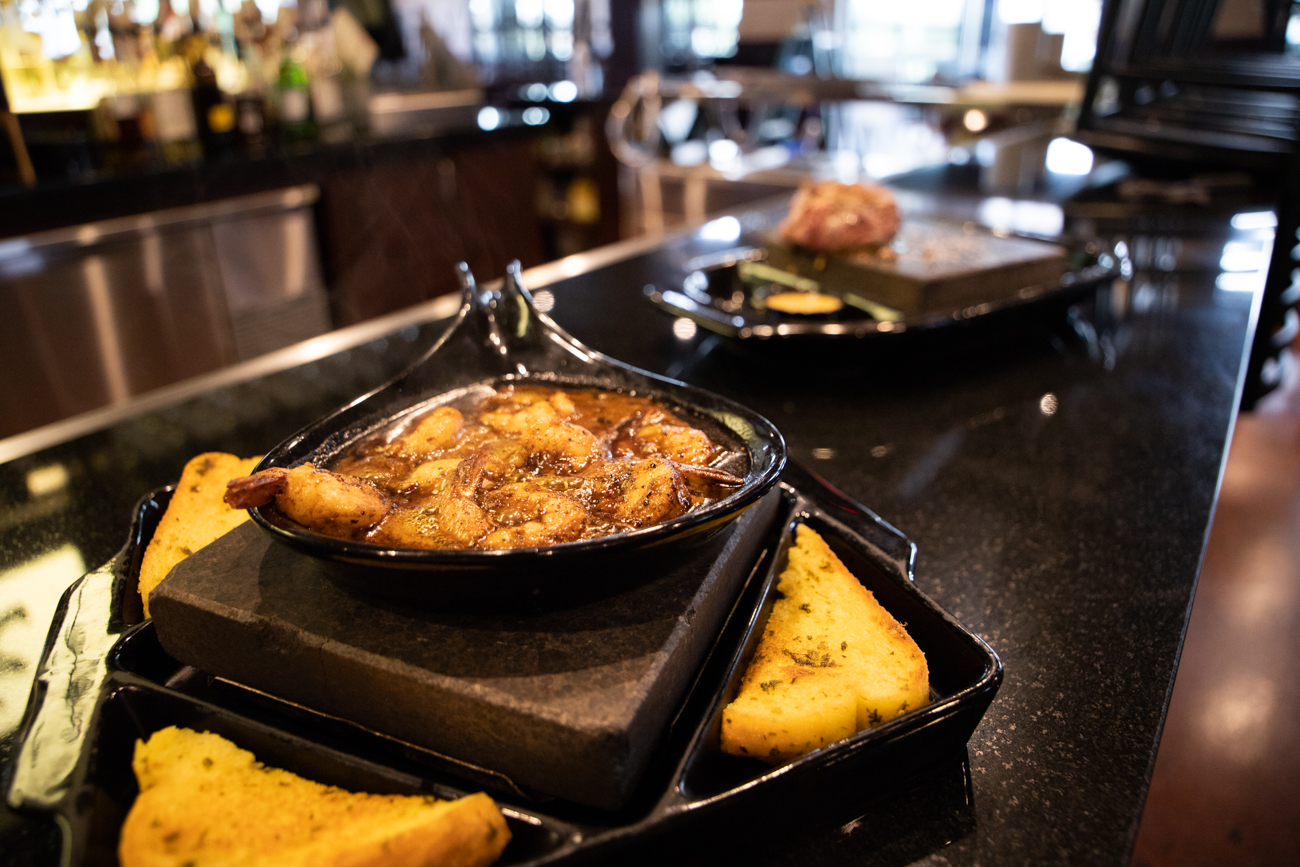 Bubbling Shrimp on a stone

Diners can also enjoy some unique appetizers. A customer favorite is the Black Rock Dueling Pretzel & Cheese Fondue™: soft pretzels served with house-made, white garlic cream cheese and a nacho cheese fondue that comes to your table piping hot on the volcanic stone. The Bubbling Shrimp™ is also very popular – large shrimp sautéed in the chef’s special Cajun butter sauce, served with toasted garlic bread for dipping. “It comes in a skillet on top of the rock, bubbling hot!” exclaims Simonovic. 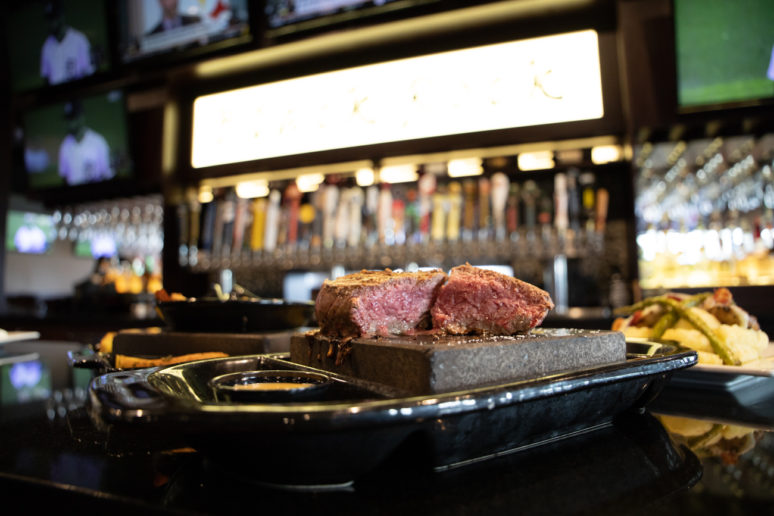 The main attraction is the 755-degree Australian lava
rock on which the meat is cooked, right at your table.

An enthusiastic staff helps make the Black Rock experience one to remember. “It’s a great place to work!” exclaims server, Kelly Smreka. “You couldn’t ask to work for better people.” Davison resident, Jen Ashley, has tended bar at Black Rock since the day it opened. “I really enjoy coming to work every day, and that’s important,” she admits. 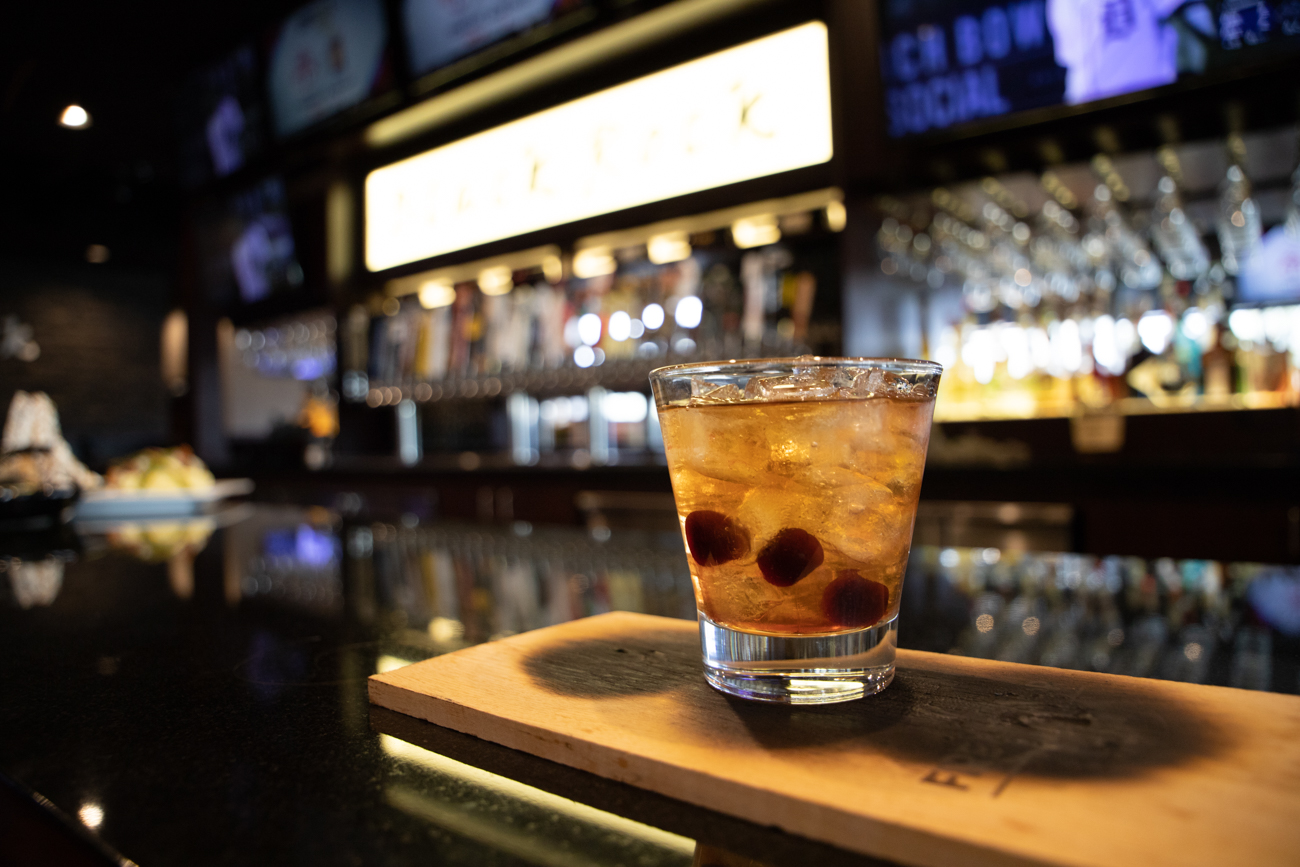 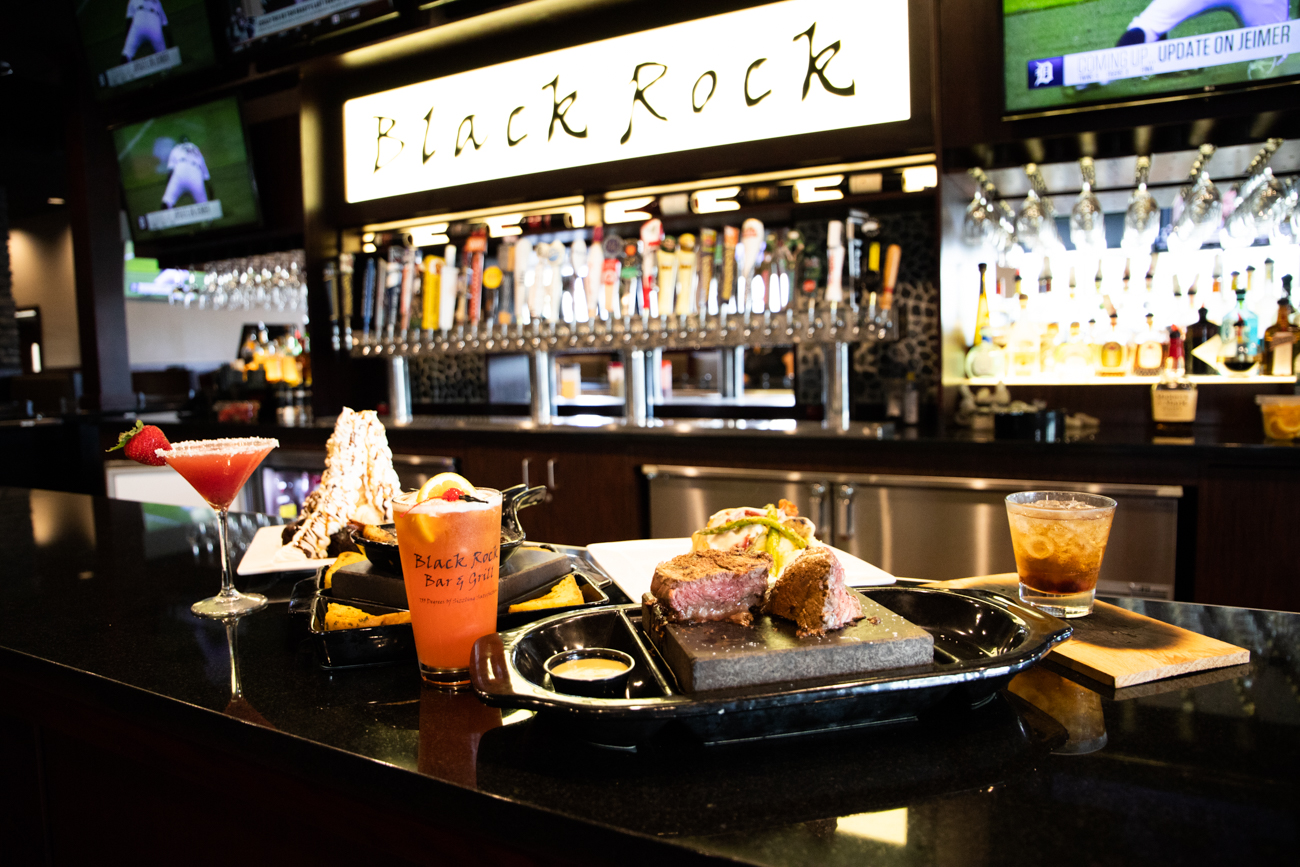 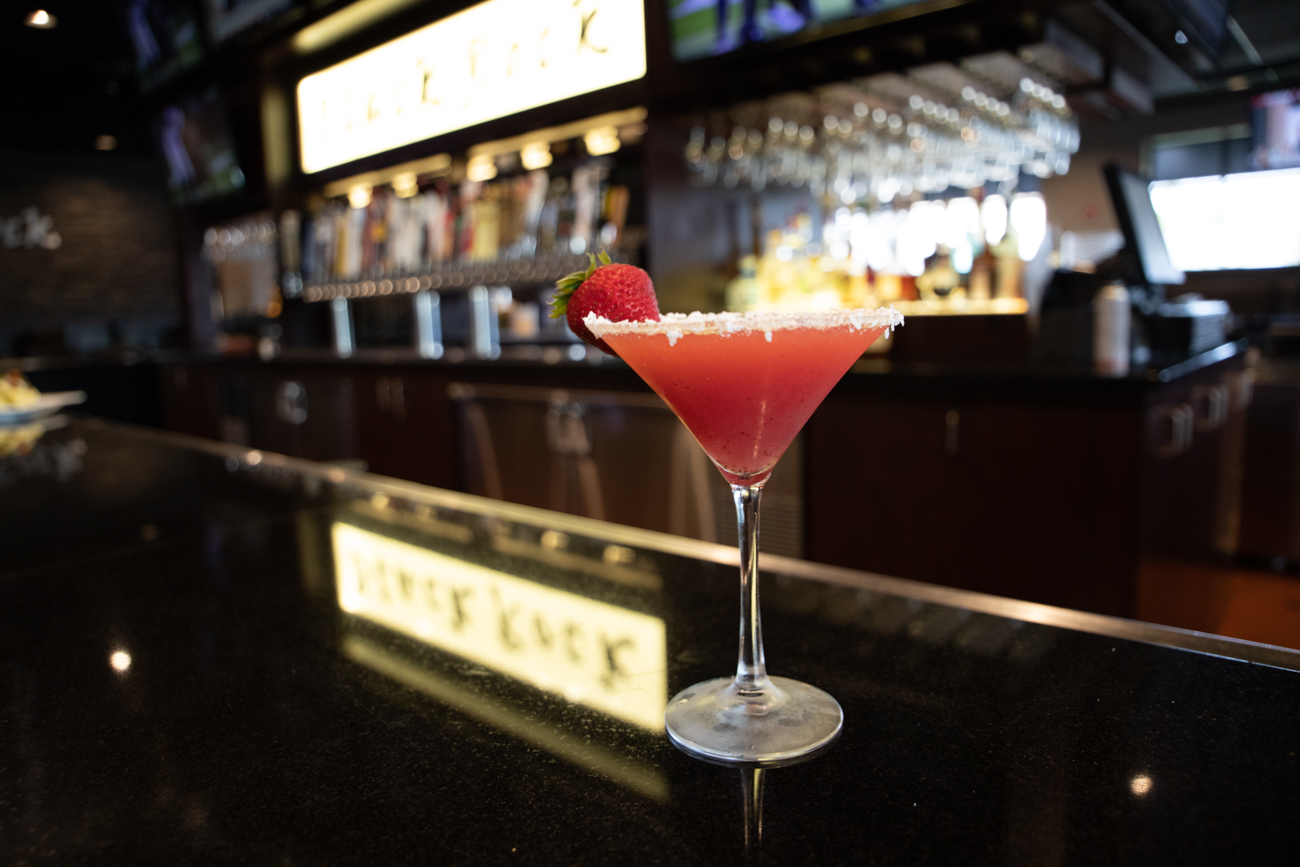 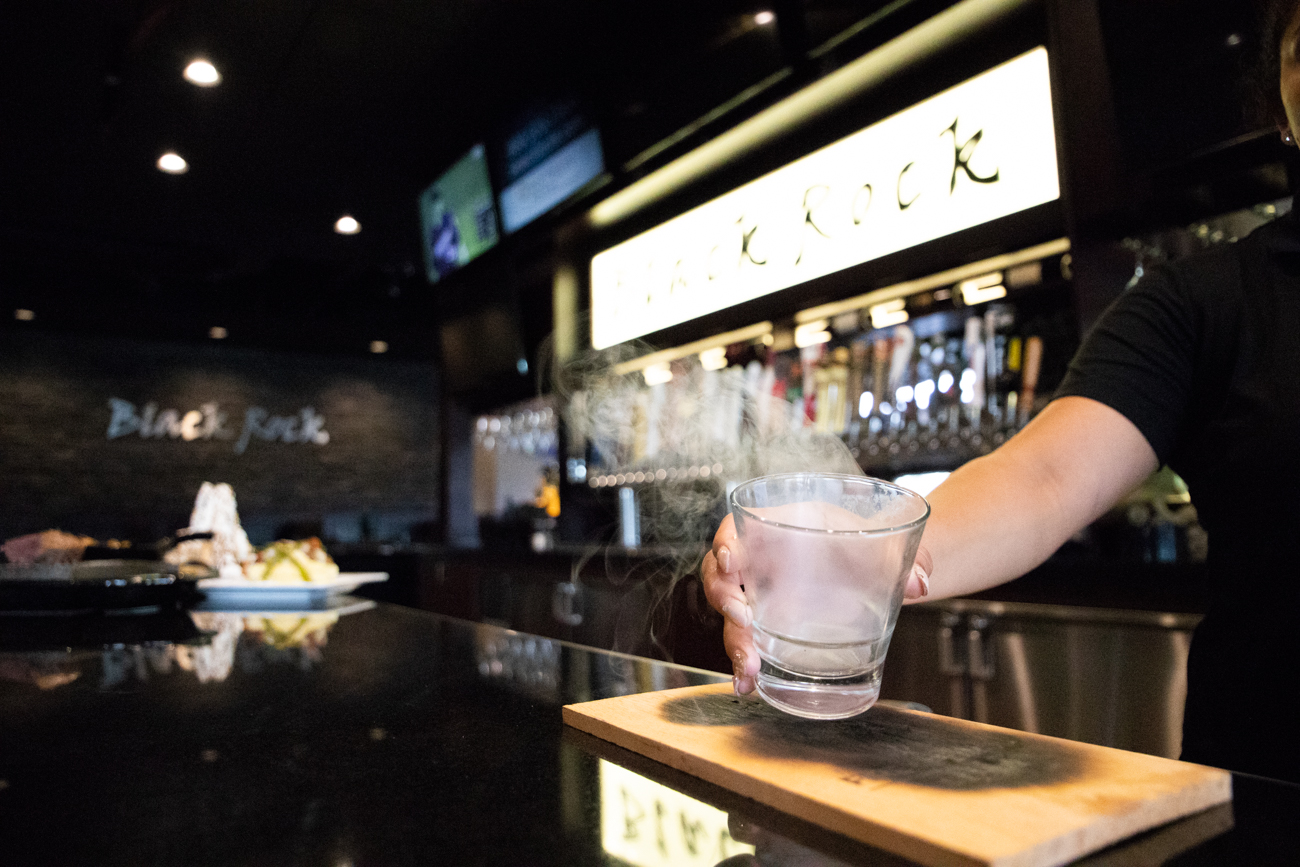 Black Rock offers a board room that holds up to 30 guests for business meetings, showers, birthday parties and celebrations of any kind. The glassed-in room features a glistening, black table with leather chairs and a screen for presentations. There is also an enclosed patio with doors that can slide open in pleasant weather.

It was easy to see why the Sizzling Black Rock Volcano™ won the MCM City’s Choice Award for Best Dessert. This decadent plate of deliciousness is a house-made brownie loaded with four scoops of vanilla ice cream, a crispy waffle cone, whipped cream, chocolate, caramel and a marshmallow, formed in the shape of a volcano and then topped with sparklers. “It can be shared by four to five people, “ Simonovic boasts, “and it is delicious.”

Simonovic looks forward to celebrating Black Rock’s one-year anniversary in Davison. “It has been wonderful to bring this dining experience to the community and they have embraced it,” he says. “It’s a wonderful concept – kid-friendly and a great environment for everyone!”