Members of the Flint band, Birdhouse, have a hard time describing exactly where they fall on the musical spectrum. “Whenever we post a date on Facebook or a flyer comes out for a show, it’s always a nightmare,” says guitarist, Keith Music.

“We get the most bizarre descriptions,” adds lead vocalist, Gabby Davis. “Didn’t someone say we sounded like ‘dreamy indie pop’?”

“Yeah,” Music recalls, “and there was the one time we got booked as a ‘riot grrrl 90s influenced pop punk’ band. But, at least they didn’t say we were ‘folk’.”

“I think we decided on ‘dancy noise rock’,” concludes bassist, Ryann Richardson. The band seems to think this is the closest they will get to pinning down their category. 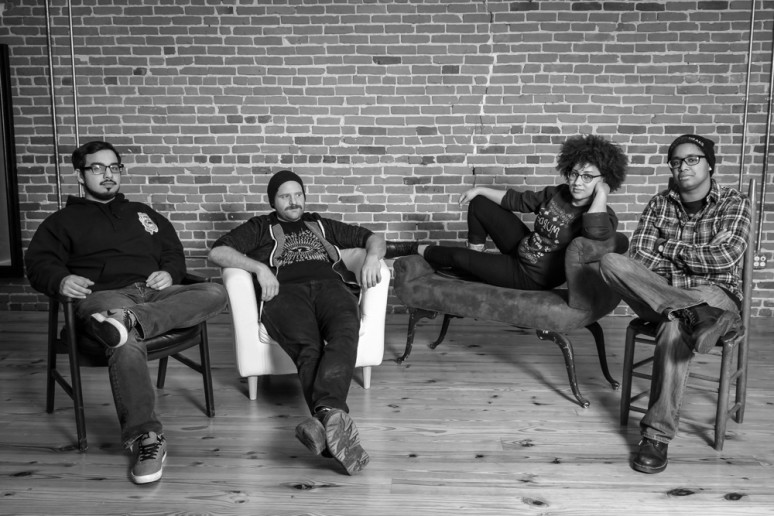 Whatever labels and genres they settle on, each member of Birdhouse brings a wide variety of influence and style to the band. Keith Music has an affinity for the noisy and chaotic, such as Sonic Youth, as well as the more reigned-in chaos like Modest Mouse. Davis grew up listening to her dad’s music, which included everything from Motown to Prince to Tupac. Richardson says The Red Hot Chili Peppers inspired her to pick up the bass guitar. “Shut up, I was twelve!” she says in defense of her self-admitted guilty pleasure. For drummer, Kevin Reyes, inspiration comes from a wide variety of music as well, including hip-hop and metal. The result is a mash-up of distorted guitars, memorable melodies, and grooving bass and drums. Thus, “dancy noise rock.”

When Birdhouse formed two years ago, Music (the primary song-writer) had just finished a stint in a folk band, but was growing tired of playing folk and needed a change of pace. Birdhouse was going to be a completely new musical endeavor. “I was expecting it to sound like Black Sabbath,” he recalls about their first practice as a full band. “I counted in a song and right away, they were going with a disco groove, and I was like, ‘okay, none of this is going to go the way I planned it’,” he admits with a laugh. The unexpected, however, quickly became their strength. When Music has a song idea he wants to pitch to the band, it will take a number of twists and turns before it’s finished. “By the time [Richardson and Reyes] write their parts, it’s about four miles away from where it started,” he says.

After writing and playing shows for a couple of years, Birdhouse has released their first full-length album, Morningstar. The band says they didn’t set out to write an album, but rather, picked out and compiled their favorite songs they’ve written. Morningstar opens with “How To Drive Blind” – a haunting, acoustic track about being stranded in the desert and going insane – that stands as the oddball on the record. “I wrote the lyrics while drunk at one in the morning,” Davis says, which, Music adds, is how all of their songs are created. 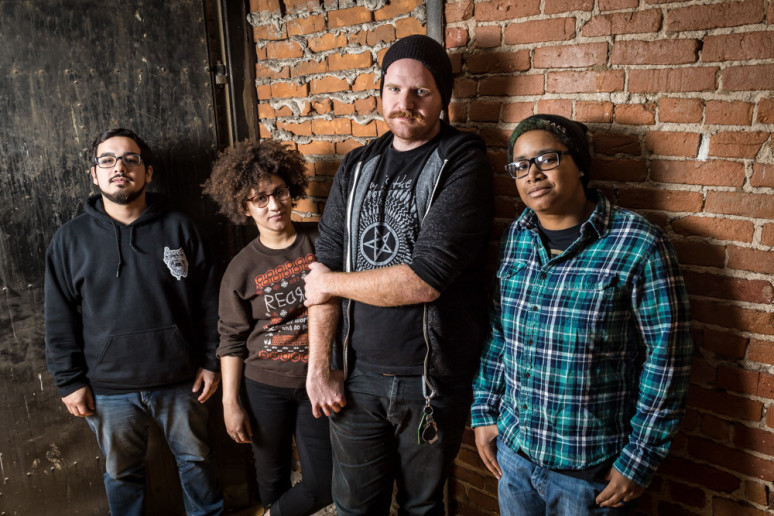 Once the somber opening track fades out, the rest of Morningstar turns up the energy and throws hook after hook at the listener. Richardson and Reyes are exceptionally tight together on the bass and drums,
like two halves of the same brain, with their chemistry most notable on “People On The Stairs” and “The Voice.” It’s a rarity when basslines stick out in the mix (kudos to Schwonk Soundstead in Port Huron, where the album was recorded), and all of Richardson’s lines pop, bounce and groove in ways that often go underappreciated.

With the bass/drums keeping the foundation solid, the vocal melodies are what really push the songs forward. Davis’ vocals are full of heart and Music’s melodies really shine. “That’s always amazed me about Keith (Music), because he listens to some of the least melodic things I’ve ever heard,” Richardson says, referring to Music’s affinity for the noisy, harsh sides of songs. Collectively, the other members hilariously refer to this side of Music’s personal taste as “dumpster divin’ ass music.”

“He tortures us when we’re together and listens to melodic stuff on his own,” Davis says, accusingly.

Wherever the melodic influence comes from, it brings together each song with catchy hooks and choruses. A particularly emotional track about losing a loved one, “Funeral Economics,” strings together a succession of memorable melodies, serving as a great summation for what Birdhouse is about. Morningstar ends with a bang – a fan-favorite called “No Talking.” The final lines of the record are the ever-repeating “I wrote a love song/But what’s a love song/I didn’t want to have to write a f—ing love song.”

“People love screaming along to this song, but I think they just like having an excuse to scream the F-word,” Richardson says. Whether an excuse is needed or not, it’s hard not to sing along.

Whatever genre of music Birdhouse falls under, Morningstar is a catchy, tight, fuzzed-out record that you’ll be swaying and singing to after a single listen. The melodies are memorable, the guitars are messy, and the bass and drums are tight on a molecular level. Give it a listen and follow the band for updates at facebook.com/birdhousesongs/.
“I think we decided on ‘dancy noise rock’.”
Ryann Richardson
Photography by Eric Dutro