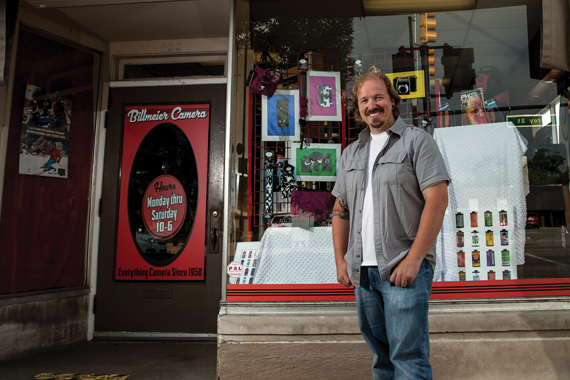 In the heart of downtown Fenton is Billmeier Camera Shop, one of the city’s oldest businesses. Established in the early 1900s as Tamlyn Photography, the shop has served Fenton and the surrounding area for nearly 100 years. Arnold Billmeier was probably an apprentice to George Tamlyn in the early ‘40s, and when Tamlyn retired, the business became Billmeier Studios. Arnold and Hilda Billmeier ran a successful venture until the mid-1990s when Arnold suffered a massive stroke. Hilda tried to manage the business alone but eventually sold it, and although it’s been through transitions, the Billmeier name has been restored once again to the little shop.

In 1997, when Terry Green was hired at the camera shop, he had no idea he would one day own it. Terry’s fascination with camerawork began as a child with his grandfather’s subscription to National Geographic magazine. Looking at the gorgeous images, Terry thought, That’s what I want to do; travel the world and make images. His love for photography was nurtured by his sister, Melissa, who gave him a subscription to Time magazine, which came with a plastic 35mm camera. From that point on, Terry took pictures of anything and everything. Later, his talent for camera repair developed when his grandmother told him he could have her old camera if he could fix it. So he did. Simply put, “I have always loved cameras,” says Terry. While at Fenton High School, Terry was on the newspaper and yearbook staffs. “I have a huge love and appreciation for the journalism program at Fenton High,” he says. Pam Bunka, who directs the program, was a major influence in his life. “It was because of her that I got through high school and graduated.”

Upon graduation, Terry thought that a photography career was just a pipe dream. He chose to attend Ohio Auto Diesel Technical College but discovered it wasn’t the right path for him. He returned to Michigan to attend Lansing Community College, which has one of the nation’s best photography programs, then returned to his hometown and started working at Billmeier Camera Shop as a sales associate and studio assistant. In 2000, Terry was given the opportunity to purchase the camera shop, which was operating in the same building as a photography studio under new ownership. On September 1, 2001 the sale was final. A few years ago, the business came full circle when Terry bought the building and re-opened Billmeier Studios.

Over the last 13 years, Terry has grown the business into a one-stop camera shop and today, Billmeier Camera offers repair, a full-service photo lab, and custom framing. Billmeier specializes in Canon, Nikon and Sony products. The shop stocks equipment and accessories from lens caps and filters to tripods and bags and everything in between. Most recently added to the line-up was the GoPro action camera line, and all of the accompanying accessories. “We are the go-to place for GoPro,” says Terry.

Terry credits the success of the business to his knowledgeable staff. Sales Manager Amanda Burton started working at Billmeier’s when she was 18 years old. “She’ll blow you away with her camera knowledge,” boasts Terry. “She also knows a lot about camera equipment, both new and old.” Kelly Smith does the custom framing and Terry describes her as “the most talented framer in the area.” Julie Kruse runs the full-service photo lab, which provides video transfer services and in-house printing in nearly any size. “She’s efficient and detail oriented, and always produces the best possible product,” he says. Terry does most of the repairs, as well as overseeing the business, and is proud to see his son Asa, who is 16, now working at the shop. “He’s still learning the ropes but will eventually learn camera repair,” says Terry in regard to his plans to teach his son. Mike Naddeo manages Billmeier Studios, which is available by appointment only. The studio strives to provide the most dynamic images possible with services such as family portraits, senior photos, commercial photography and more.

At Billmeier, the tagline is Everything Camera. “We are the last real camera shop in Genesee County and beyond,” says Terry. Billmeier Camera is a staple of Fenton, and Terry plans to stay right where he is. “This is where I grew up. This is where I live. I love Fenton!”

See more photos HERE, or purchase photos from this story by going HERE and selecting the “Billmeier Camera” category.